The Cigar Culture’s Hawk by Blackbird Cigar Co. is, I believe, the first collaborative cigar put out by Blackbird Cigar Co. Released in November of 2021, the Hawk is a box pressed toro that features a Brazilian cubra wrapper over a Mexican San Andrés binder and Nicaraguan and Dominican fillers. It’s a very limited run of 600 boxes of 14 cigars.

I’m not overly familiar with the Cigar Culture, but a quick Google search led me to their Facebook page that has over 4,000 followers. Their goal, according to their page is “to bring to the consumer the best criteria about the tobacco and cigar industry”, and they are also ,”committed to giv[ing] the highest level of education.” A noble goal, indeed. I will admit to being a huge fan of Blackbird’s core lineup, so I’m eager to put the Hawk through its paces.

WHAT’S ON:
The sounds of birds enjoying a nice day in November. 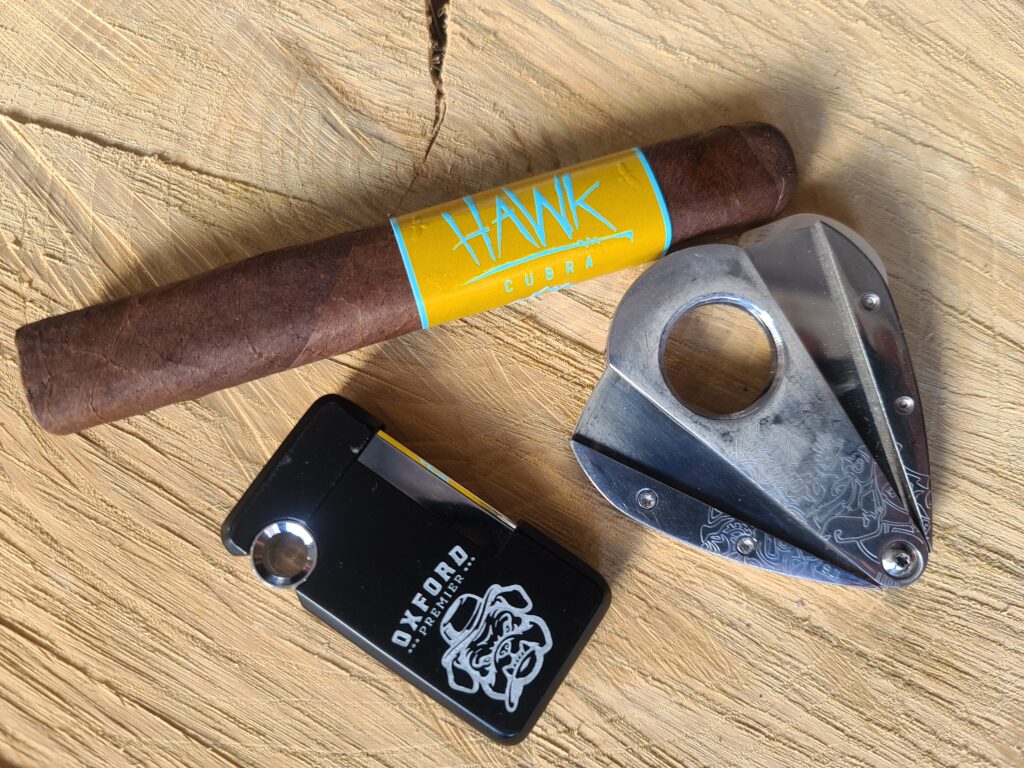 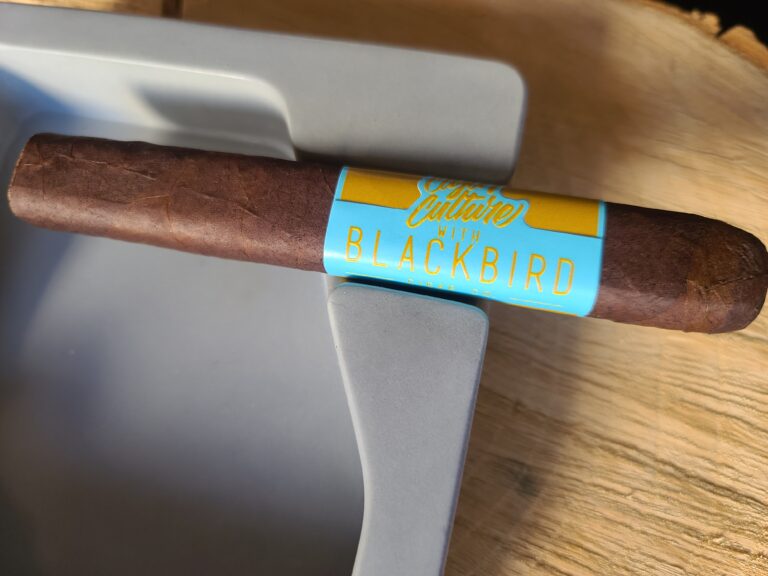 The band design pops against the Brazilian cubra wrapper. The front of the large band is bright yellow with a blue/green accent. It sports the name of the cigar in large lettering, as well as the name of the wrapper right below it. The backside of the band features inverse colors with collaborators names listed. While I do like the overall look of the band, am I the only one who thinks that the size of some of these cigar bands is getting out of hand? The band, while stunning, is about a third the size of the cigar. For me, understated is the way to go but there is something about this band that is just fun while still being classy. 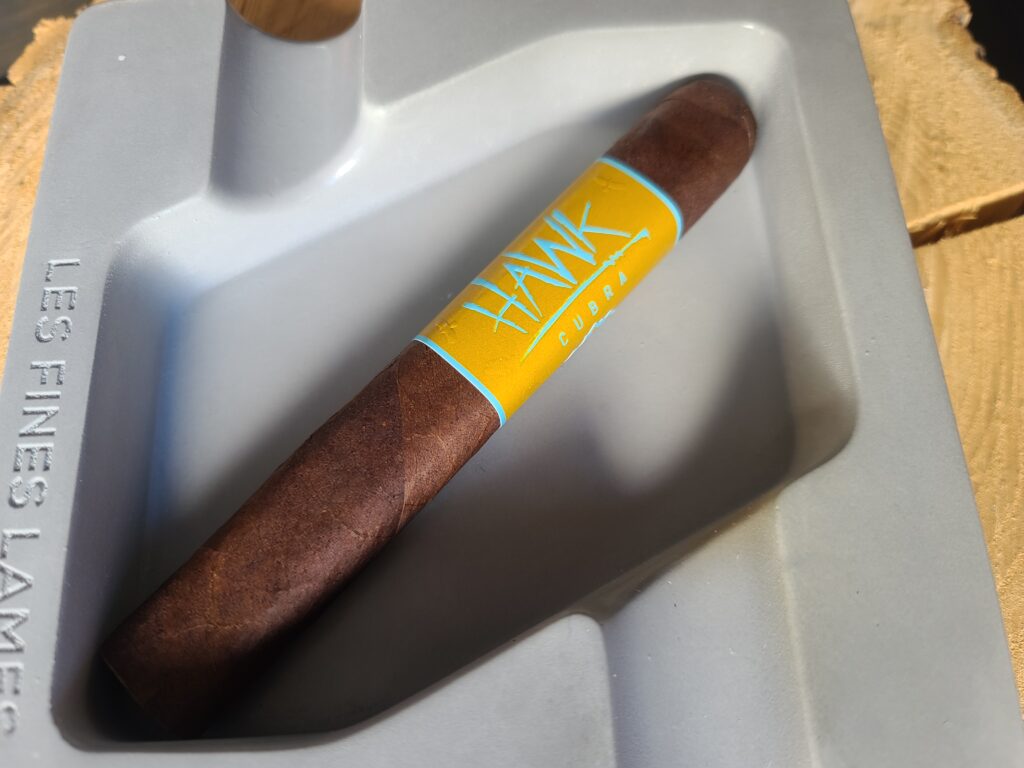 CONSTRUCTION
The Brazilian cubra wrapper is the color of chocolate. The rich, brown wrapper is rough to the touch. While not exactly toothy or mottled, the wrapper is darker in some areas. The soft box press is beautiful and the Hawk has very few veins. It is a gorgeous looking cigar.

AROMA
The wrapper gives off just the faintest hints of cedar, hay and chocolate. The foot continues the fresh hay, but I also detect the sweet note of tobacco. There’s also a subtle note of cloves and other baking spices that I find lurking beneath the major notes.

COLD DRAW
The cold draw reveals a tanginess that’s almost (but not quite) citrus, and just a bit of chocolate. The chocolate lingers on the finish. There’s a slight sour note that I can’t quite place, but it isn’t overbearing or off-putting

LIGHT & DRAW
Cut: Xikar Xi3
Fire:  AT Dupont Hooked
The initial light produces a tangy, sour note that reminds me of sweet tarts. There is a blast of pepper on the retrohale and a rich, chocolatey sweetness that lingers on the finish.

SMOKE
The smoke is rich and creamy. It’s more than enough to coat my palate. As the cigar rests, whispy smoke escapes from both ends of the cigar for just a moment. That sight always gets me. The foot continues to burn slowly, as a faint smoke escapes the cigar. 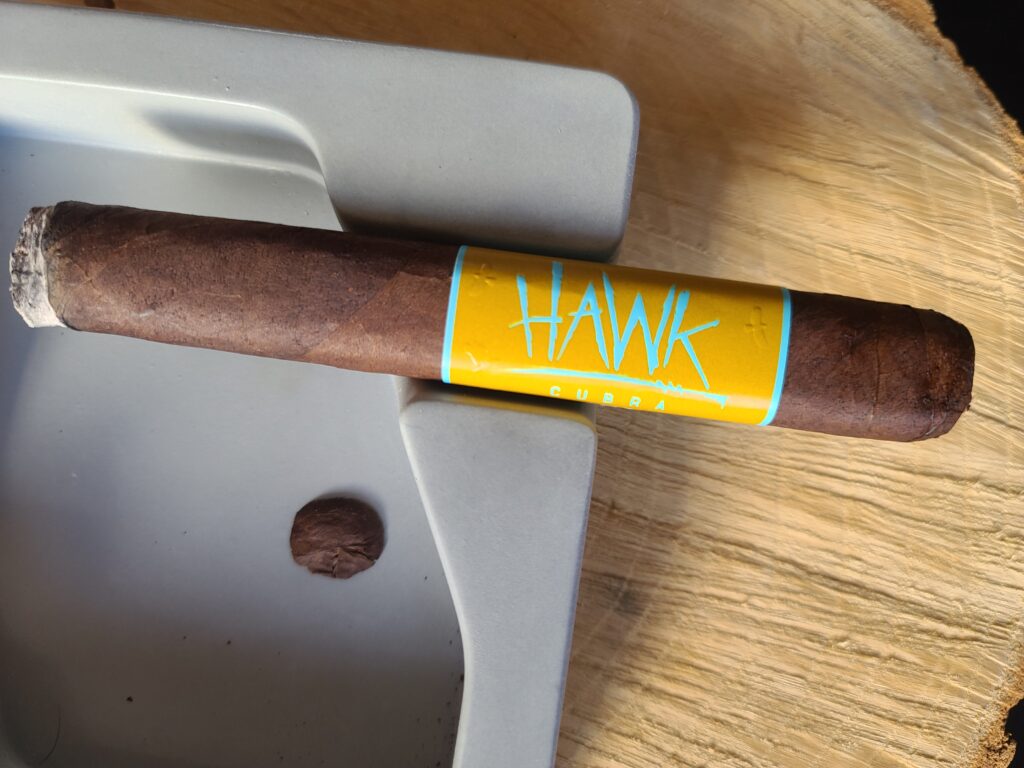 Black pepper dominates the retrohale. The rest is kind of muddled, to be honest. The tartness from the initial light has faded and I’m left with a bitter burnt wood note, some candied orange peel and chocolate on the finish. Salted butter starts to come through. That only serves to highlight the bitterness but it does add a creamy element to the profile. None of this overly off-putting, but it’s not really coming together in my mind. The burn line is wavy but not in any danger of requiring a touch up. The ash is grey and black, and it’s stacked perfectly. There is a bite to that pepper on the retrohale that works really well with the citrus note. The tartness returns halfway through the first third, and it brings out the bitterness of the burnt wood. The citrus comes and goes, playing hide and seek with my palate. When it’s there it’s amazing. When it isn’t, the Hawk feels like it’s missing something. Salted nuts start to mellow out the bitterness of the burnt wood. 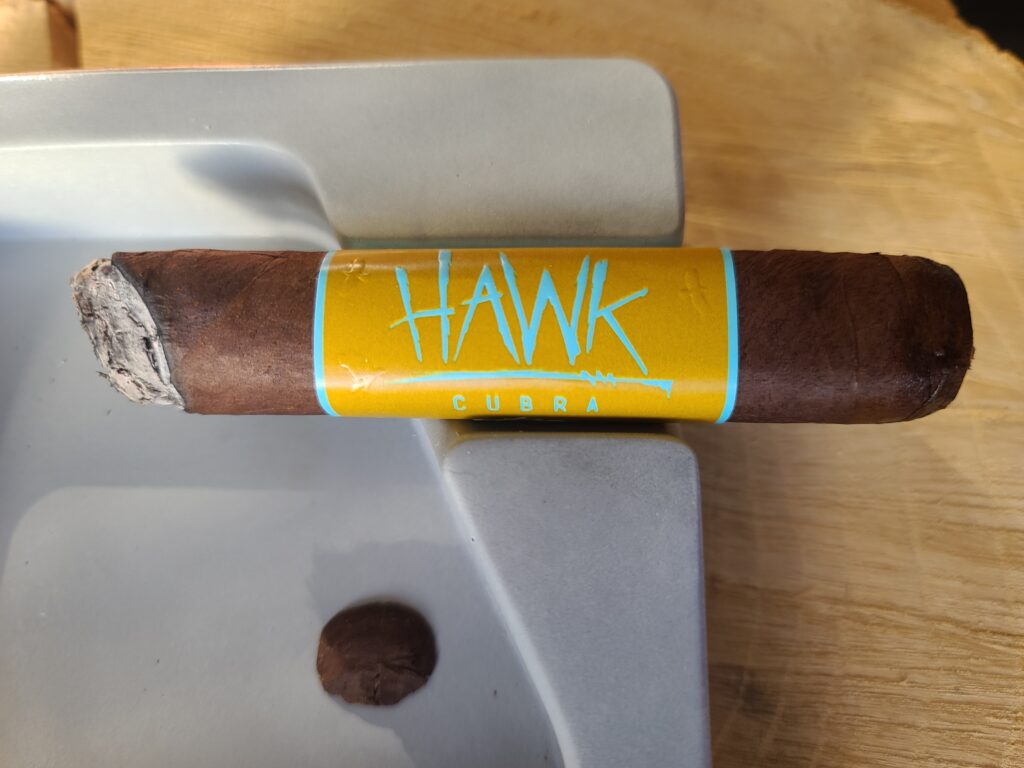 The second third begins unceremoniously, as the ash falls onto my lap. That was my fault for not paying attention. No matter; I press on. A barnyard note comes out of nowhere, along with a nice coffee note. What was tart is now sour, and I’m having a hard time putting my finger on what it is. White pepper rules the retrohale. The smoke is still creamy and thick with each draw. Powdered cocoa lingers on the finish. There’s a bit of sweetness to it, but not enough to call it mocha. Regardless, it mixes well with the coffee note. The sour note brings a cherry note with it that is reminiscent of cherry flavored yogurt. The burn has corrected itself and the ash is ever so flakey. Salted nuts show up and work well with the cherry yogurt…I feel silly even writing that…but it is what it is. The ash falls into the tray. For a moment the Hawk begins to go out on me and a harshness breaks through that is extremely bitter. The ash is flakey and starts to separate. 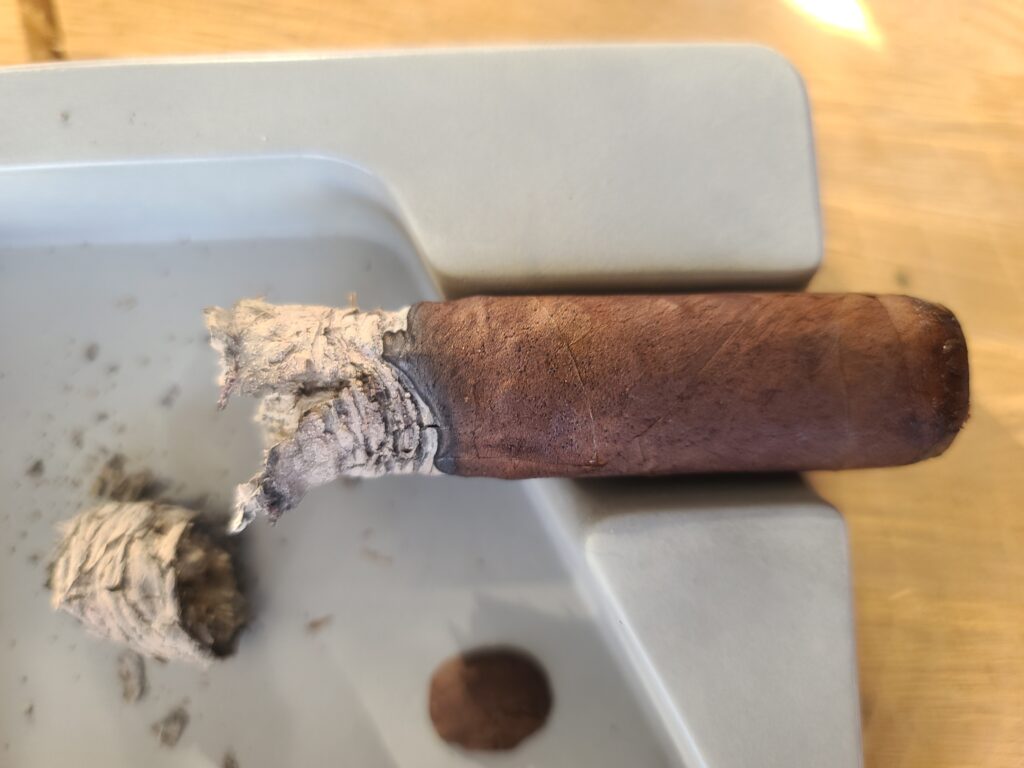 The final third brings a rich sweetness and black pepper on the retrohale. Salted butter cuts the sweetness and blends together nicely. Campfire and an earthy note intertwine with the sweetness as baking spices appear. The ash is more compact than in the middle third. The burn line falters and corrects itself. Cherries still hang around the palate. The baking spices add a dimension to the Hawk that was missing in the first two-thirds. The rich sweetness morphs into a nice coffee note. Buttered toast rounds out the final third. The closer I come to the end of the Hawk, a bitter note becomes more dominant, drowning out any other flavors. The saving grace is the cherry note that lingers on the finish.

FLAVOR PROGRESSION
Muted sweetness. Tart and sour. Harshness in the middle and very end. What could make the Hawk great gets overshadowed by what detracts from it. The flavor progression begins muted and ends rather harsh and overpowering. The subtleties and nuance are great, when they’re not being drowned out.

BURN EXPERIENCE
The Hawk never really burned razor sharp, but it never required a touch-up or relight. The more concerning aspect was when it almost went out in the middle of the first cigar I smoked for this review. The second did not have this issue. 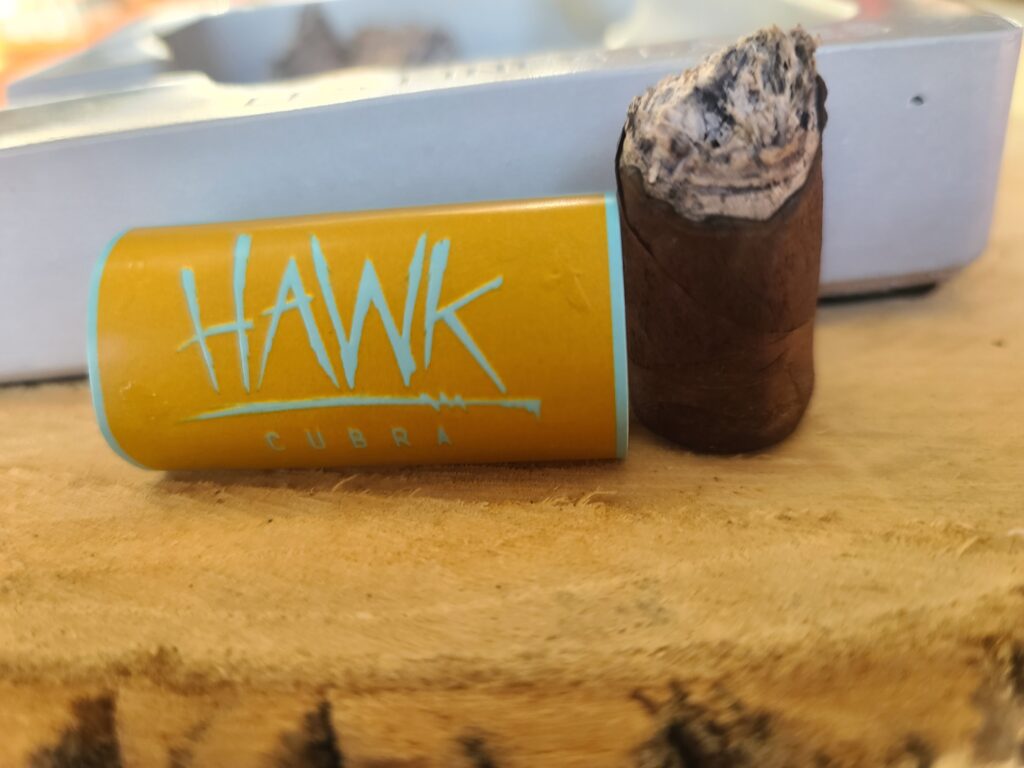 THE HAWK FLIES TOO CLOSE TO THE SUN.

The Hawk never came together for me. There were some great notes found throughout the cigar, but every time the Hawk started to find its stride, it was overshadowed by harshness that would immediately mute the flavor notes coming through. Some of that may be from the San Andrés binder coming through a bit too much. So the Hawk may turn out to be quite the gem if it’s allowed to rest for a few months. Each third had noticeable transitions but only the first third lacked the harshness that plagued the rest of the cigar. However, the first third suffered from a lack of flavor continuity and, at times, left me scratching my head wondering if I was somehow tasting it wrong. And that may be. The Hawk is priced at $14.00 a cigar, and that just seems a little high for what you’re getting.