Who doesn’t like a good mystery? Near the end of 2019, When I sat down with Jeremy Casdagli, founder of Casdagli Cigars, one of the last things he mentioned on the podcast was two new cigars coming the following year (2020) called the Cypher and the Enigma. The blends would be undisclosed and left up to the smoker to try and decipher. Both of these blends are named as an homage to his uncle, Major Alexis Casdagli, who was a German POW in World War II. He told us to Google “Casdagli, Fuck Hitler” to get the whole story. You can read the full story here, but to sum up: Major Alexis Casdagli was captured by the Germans and used Morse code to hide the phrase “Fuck Hitler” in his artwork while in German captivity. While Jeremy did say that the boxes would sport the same code, this year’s boxes do not; however, Vlada Stojanov, Casdagli Brand Ambassador and Distributor in the US, has said that the code is planned for future releases.

The Enigma released worldwide this year (2021) and is limited to a production run of 2000 total cigars. While the Enigma is under the Daughters of the Wind line, it is not based on those blends. The wrapper, according to Halfwheel, is Ecuadorian, but the binder and fillers are undisclosed. The Enigma released this year was originally rolled in 2012 at IGM in Costa Rica. Released in December of last year, the Enigma is currently not available in the U.S. I was lucky enough to get my hands on a box in February through a great BotL in Simply Stogies Club and Keepers of the Flame.

WHAT’S ON:
The sound of wind chimes in the neighborhood 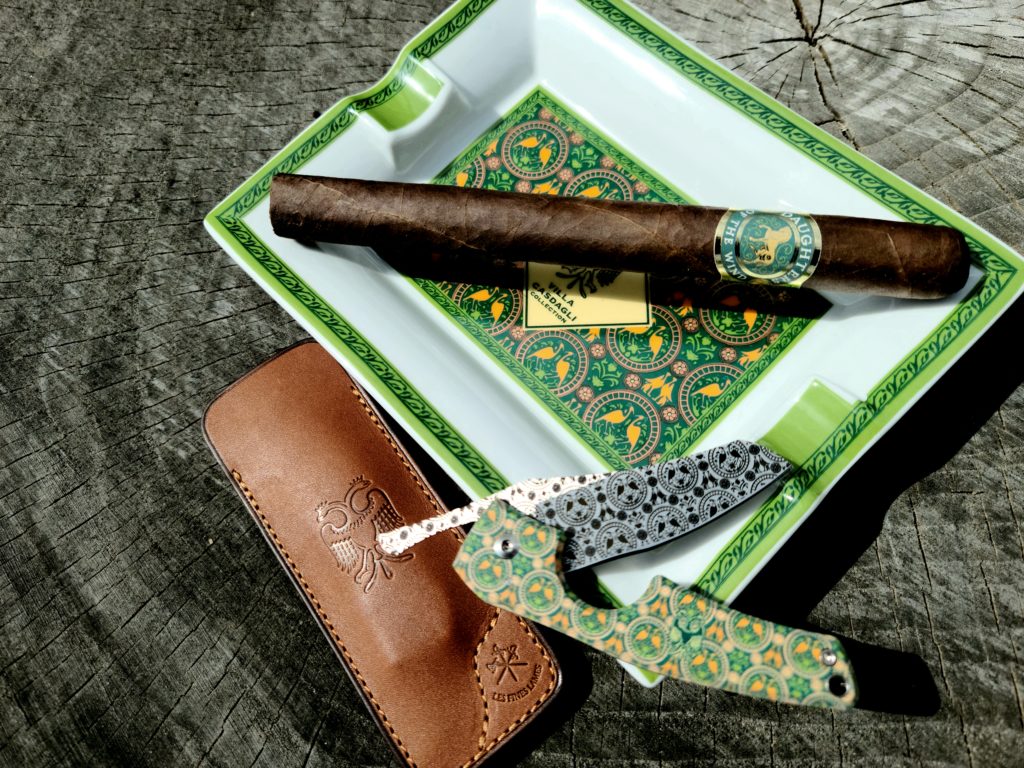 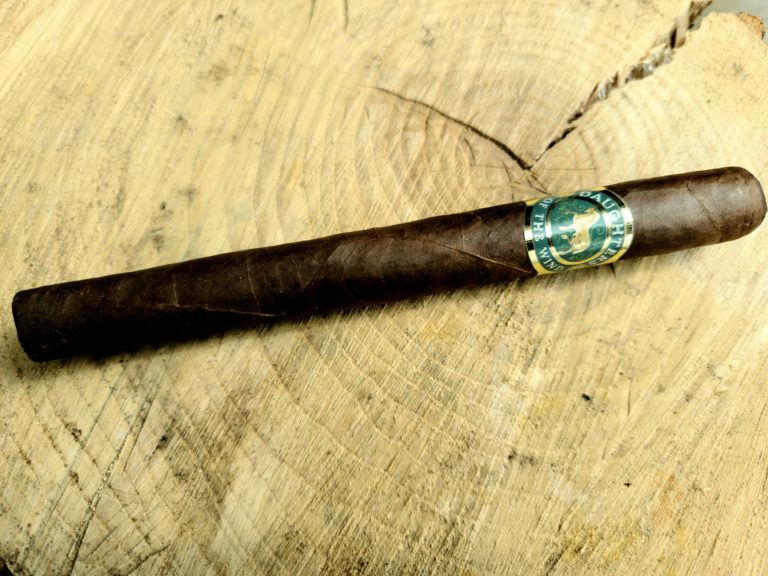 I really like the new Daughter of the Wind bands. They are sharp and sport the familiar green background with gold accents. The Daughters of the Wind logo is large and the back proudly displays the Colossus of Rhodes, which serves as the Casdagli family crest. I find this to be an elegant design choice that fits nicely with Jeremy Casdagli’s focus on his family heritage. 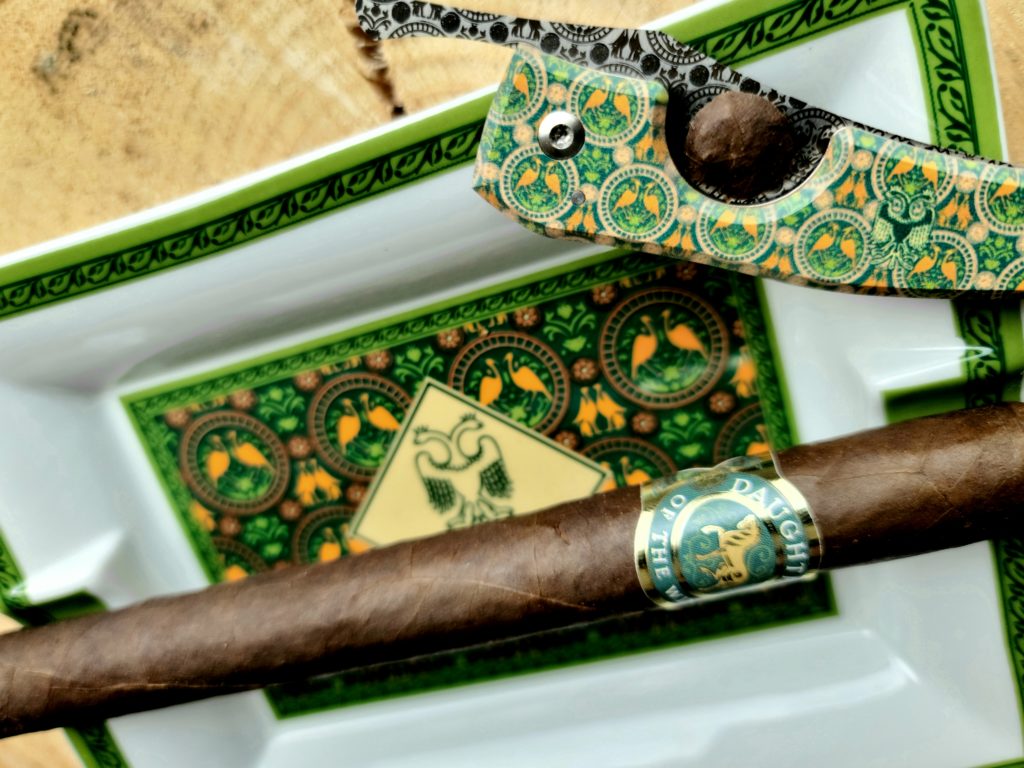 CONSTRUCTION
The Enigma has a dark, toothy wrapper that is rough to the touch but with an oily coat that shimmers in the sunlight. The wrapper shows no visible seams and few visible veins. The Enigma’s triple cap is expertly applied. Enigma is the perfect name for this cigar: it is tall, dark, and mysterious.

AROMA
The wrapper holds its secrets closely as the only note I detect from it is tobacco. The foot, however, gives up just a bit more. I detect tobacco, hay, a rich coffee note, chocolate, and just a hint of barnyard.

COLD DRAW
The cold draw reveals the same clues as the foot, but the chocolate note is more pronounced. The sweetness lingers on my palate and beckons me to light it. 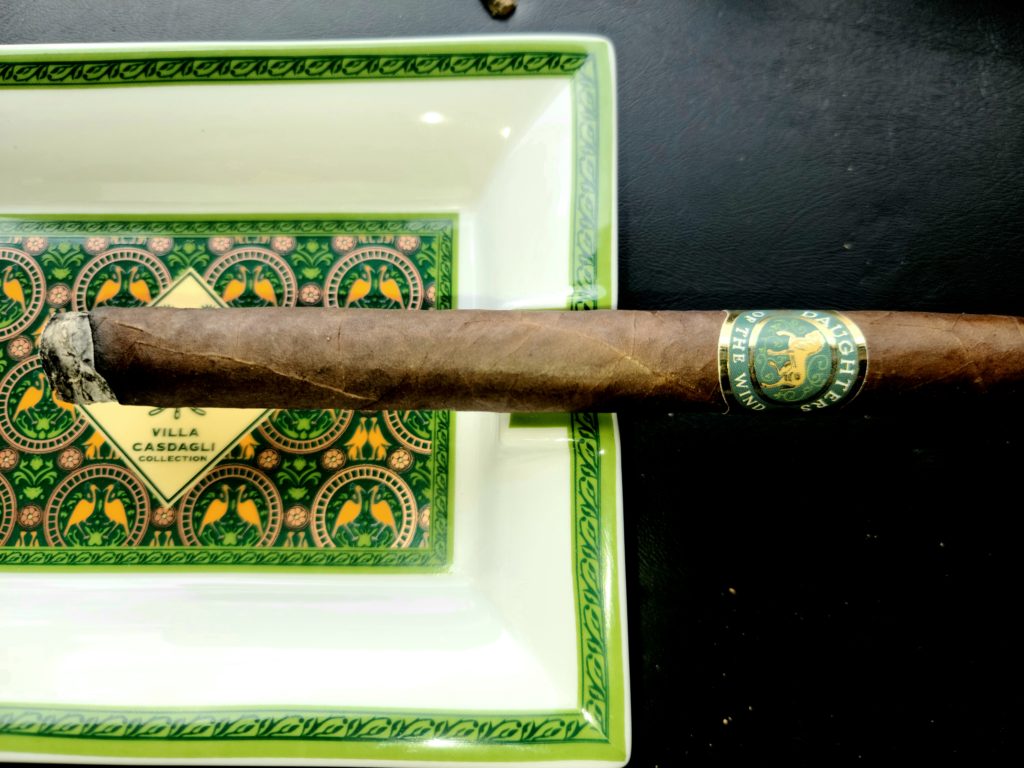 LIGHT & DRAW
Cut:  Le Petit Villa Casdagli Cigar Knife
Fire:  Xikar Tactical 1
I am becoming a pro at using the Les Fines Lames Le Petit cigar knife, if I do say so myself. I had no issues with the cut, toast, or light.

SMOKE
The smoke is creamy and not the least bit dry. The smoke production is plentiful and coats my mouth.

Dried fruit and chocolate immediately jumped out at me, followed by baking spices. A bite of red pepper is on the retrohale. The burn is a bit uneven but it quickly corrects itself. The deluge of flavors subsides and the tingle from the pepper on the retrohale tickles the back of my throat. My God, this is a treat! A bit of wood starts to creep in; perhaps it was lurking there all along? A slight nuttyness hides beneath it. The bite from the red pepper turns into more of a black pepper with each retrohale. The ash is compact and beautiful. It looks like stacked nickels. The dried fruit note has stayed constant and mingles playfully with the pepper. A creaminess that I hadn’t noticed takes hold. The ash falls onto the tray compactly and holds its shape. The spice comes back and begins tap dancing on my tongue.

What started as a blast to my palate has settled down and become very Cubanesque and medium-plus in strength. The dried fruit has just the right amount of sweetness and a touch of citrus. So far, it’s a rich and complex experience. Pepper tingles my nose and lightly paws at the back of my throat, reminding me that it’s there. It is a wonderful first third. This is akin to cinnamon raisin bread that has been toasted over an open flame. This first third is one of the best cigar experiences I’ve had so far in my journey. A mustiness begins to appear from the shadows as the first third ends. 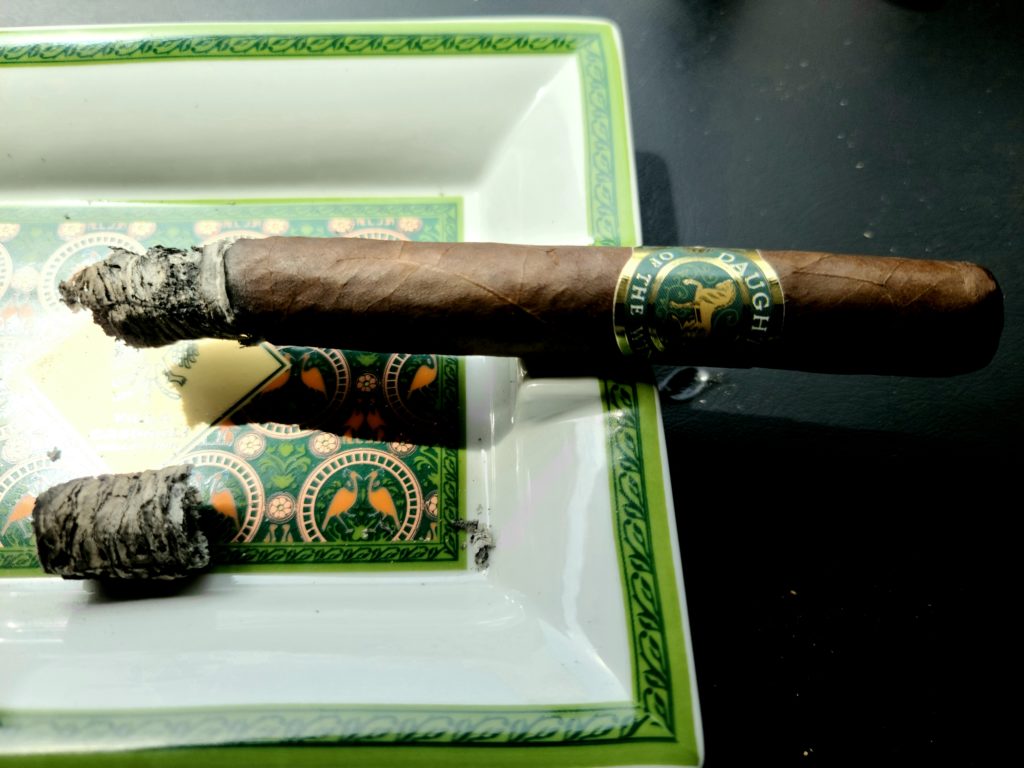 The second third starts with a bit of a wavy burn line, but nothing that needs correcting. The woody note starts to ramp up as the dried fruit takes on a more supporting role. I am salivating with each draw. The fruit is now replaced with a rich chocolate note. Baking spices on the retrohale make for a nice change of pace from the pepper. It was a subtle transition that speaks to the nuance the Enigma possesses. The sweetness hits my palate just right. What was medium-plus is now medium and very Cubanesque with more finesse and subtlety than the initial third. The double corona vitola has allowed the blender to play with a myriad of flavors. I have always said that Casdagli Cigars are a more refined and luxurious experience than most other brands, and the Enigma lives up to that standard.

The ash continues to be compact and the smoke is still creamy and smooth. There are no rough edges to the Enigma. The sweetness of the chocolate seems less sweet than your typical American chocolate. A slight hint of cedar starts to emerge. The Villa Casdagli coffee was such a good pairing for this cigar. It doesn’t overpower the cigar, but acts as a compliment to the Enigma experience. The baking spice is becoming more subtle with each puff. The Enigma is definitely medium strength now and full-bodied. Again, the ash falls to the tray and holds its shape. The chocolate note becomes coffee-like sans bitterness or acidity. A hint of dried fruit and cedar show up again, adding a nice acidic element to the flavor profile. The baking spice has never left the retrohale and is starting to amplify. The burn is now razor sharp. This, for me, is the perfect cigar experience. 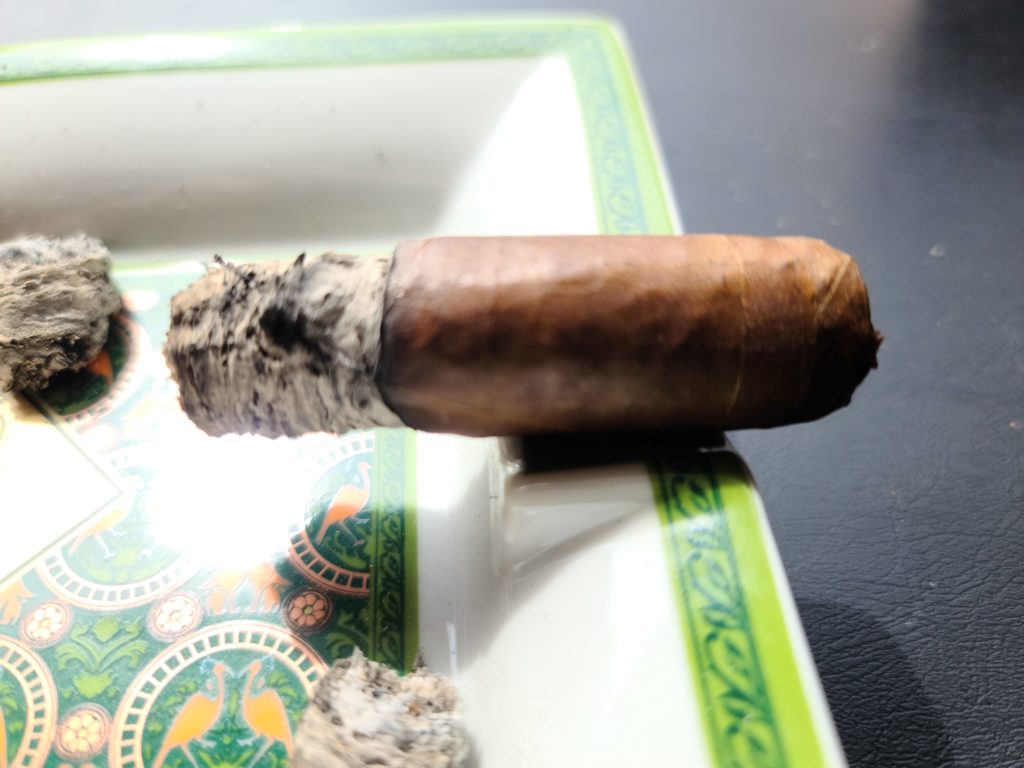 The final third begins with a musty, almost mushroom quality that I find to be intoxicating. This cigar has some kick to it. I’m starting to feel it. I typically don’t smoke double corona vitolas and it’s beginning to show. The creaminess of this cigar has never faded. Chocolate, dried fruit, wood, and black pepper on the retrohale. It starts ramping up again. The smoke is a bit less creamy, but still not overly dry. There is a raw sweetness to this final third that is a great juxtaposition to the bite from the pepper and wood. The final third is medium-plus to full, but far from a pepper or spice bomb. Perhaps it’s the double corona vitola that makes the Enigma seem stronger than it is. Do not smoke this on an empty stomach. This is as satisfying as any full-bodied cigar on the market today. This is my new go-to after dinner cigar. The ash falls in a compact heap as the burn line remains straight. A hint of citrus and sweet graham cracker shine through. I notice that wood is now the dominant flavor as dark chocolate becomes the supporting note. The Villa Casdagli coffee has helped keep these flavors balanced. Rich, creamy coffee flavors begin to round out the final third. Sweet tobacco and coffee compliment the wood and citrus. Baking spices and white pepper tingle my palate on the retrohale. As I nub the Enigma, red pepper becomes a spicy treat on the retrohale. Notes of citrus, chocolate, and red pepper linger on my palate as I finally lay what’s left of the Enigma down. Absolutely glorious.

The initial blast of flavor acted as a harbinger of things to come, foretelling the future of the cigar experience before you. What began as a medium-full experience morphed to a medium profile in the middle third before returning to medium-plus to full in the final. The Enigma kept me on my toes and never became boring or mundane. This has been my favorite cigar experience to date.

BURN EXPERIENCE
The first day that I smoked the Enigma, the wind was blowing the ash out of the ashtray. This wreaked havoc on the burn line and caused one touch-up. The second cigar I smoked had no issues and burned straight throughout. 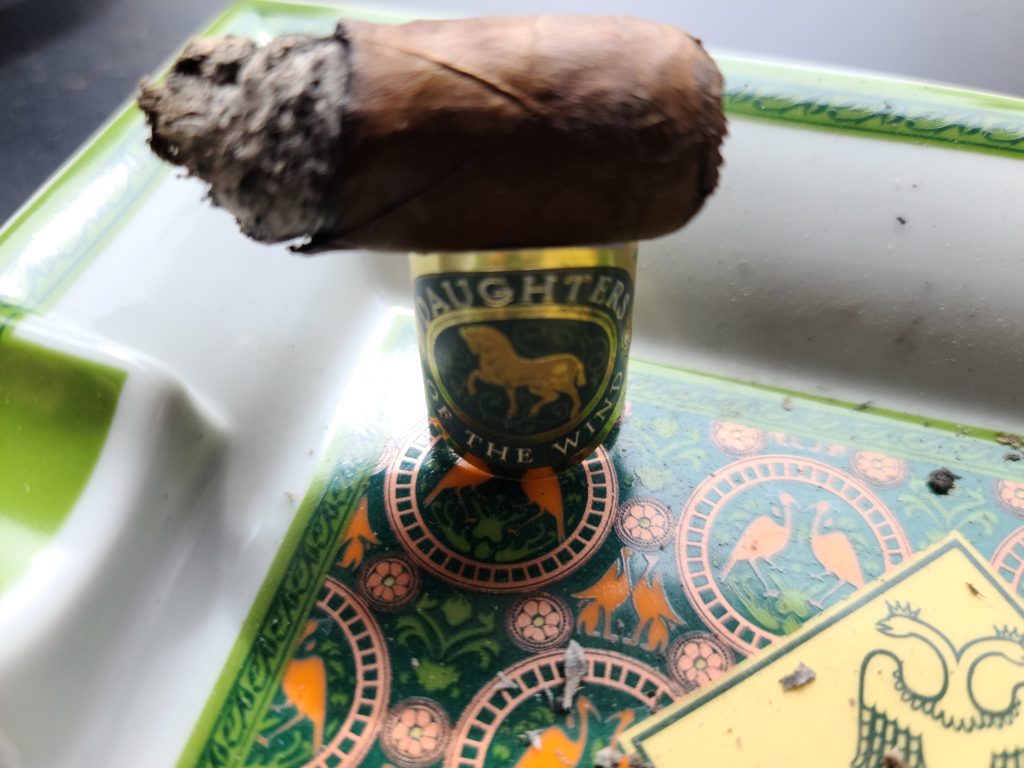 The recipe around the Enigma might be shrouded in mystery, but the final product is anything but murky. Casdagli cigars are most commonly compared to Cuban cigars and the Enigma no different. With a portfolio full of standouts, for me, the Enigma shines the brightest. It is a rich cigar smoking experience that is well-balanced and would be the perfect dessert cigar after a hearty steak dinner.