The first time I had heard about the Fiat Lux was at the PCA 2021 Trade Show in Las Vegas. It was Day 0 and Tim and I had been running around trying to get the lay of the land and set up interviews for the week. It was a blur of over 20k steps, editing, meeting new people, catching up with friends, and networking. To say it was chaotic would be an understatement. Somewhere in that mess of a day, a friend of ours in the industry ran up to us and shoved two cigars into our hands. He excitedly said, “Smoke this.” “What is it?,” I asked. He replied, ‘Put down whatever you’re smoking and just smoke it. This is like smoking a palate cleansing cigar.” We obliged. It was the Fiat Lux and and both Tim and I were blown away.

The Fiat Lux features an Ecuadorian Sumatra wrapper  over Nicaraguan binder and filler. The name Fiat Lux comes from the Latin for “to let there be light.” While that phrase is most famously known from the Old Testament story of creation (Genesis 1:3), ACE Prime means for it to be a nod to the Age of Enlightenment. ACE Prime Cigars are distributed by Crowned Heads, and the two companies have a very close business relationship. Some of the more recent Crowned Heads releases have come from ACE Prime’s factory, Tabacalera Pichardo.

WHAT’S ON:
The peaceful hum of the heater. 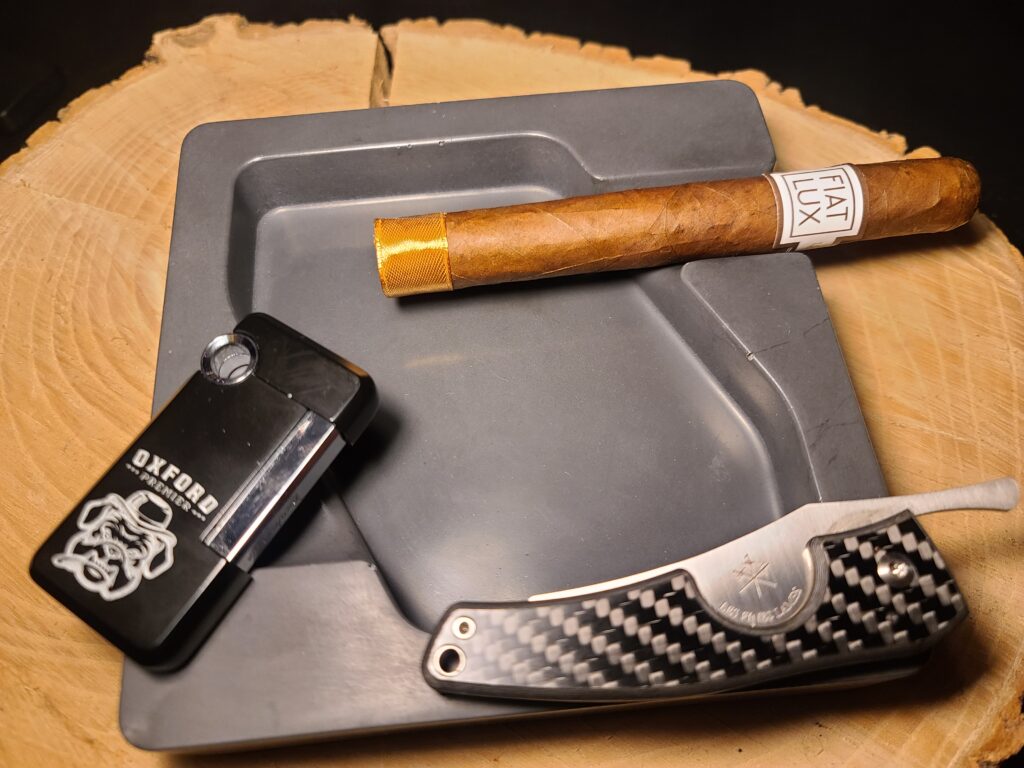 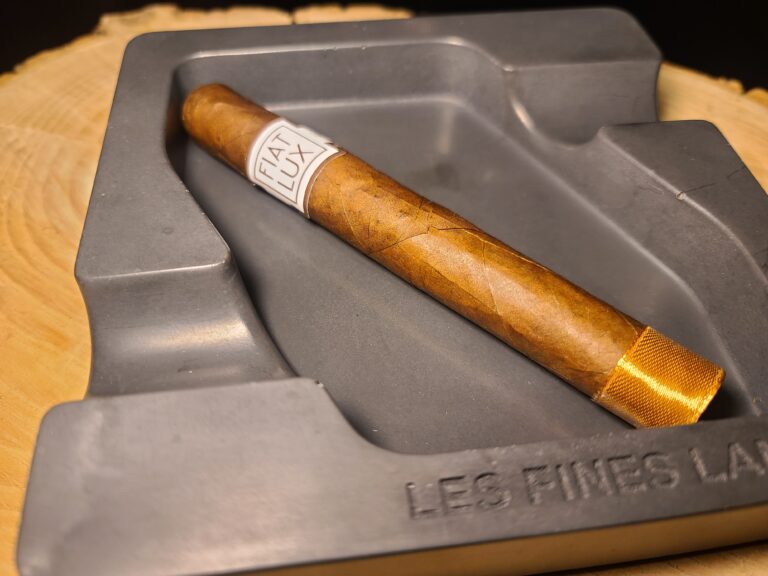 The Fiat Lux band is a simple, if not elegant design. White with a dark gold accent. The name of the cigar takes up the most real estate on the band and is ensconced by a dark gold box. There is a gold ribbon on the foot of the cigar that adds a touch of class. 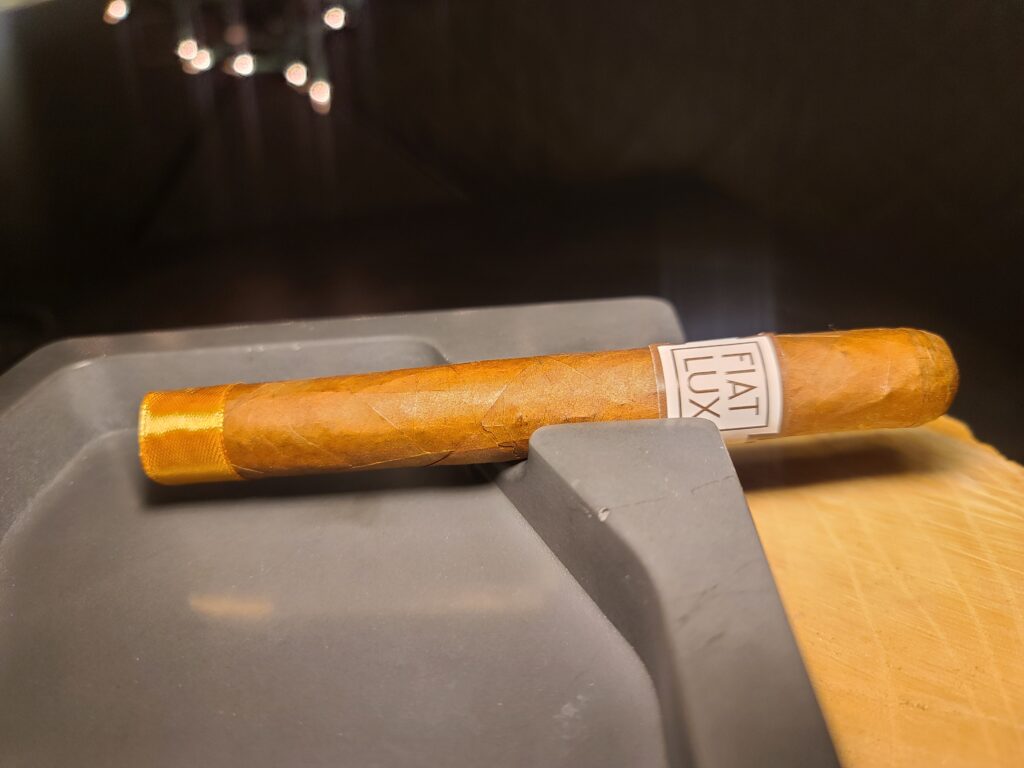 The Ecuadorian Sumatra wrapper feels delicate and smooth to the touch. It’s a bit toothy with several visible veins and one very visible seam. The Fiat Lux springs back as I gently squeeze the cigar looking for hard or soft spots. It’s a gorgeous looking cigar that elicits a feeling of anticipation from me.

The aroma coming from the wrapper is a spicy cedar. Strong and pleasant. The foot holds something else entirely, fruit! Fresh fruit with a hint of baking spices and citrus. The notes are strong and easily discernable, even though this reviewer couldn’t determine which fruit it was wafting from the foot.

There’s a good bit of fruit and baking spices from the cold draw. A bit of chocolate lingers on the palate. As for the draw, it has just the right amount of resistance to it. 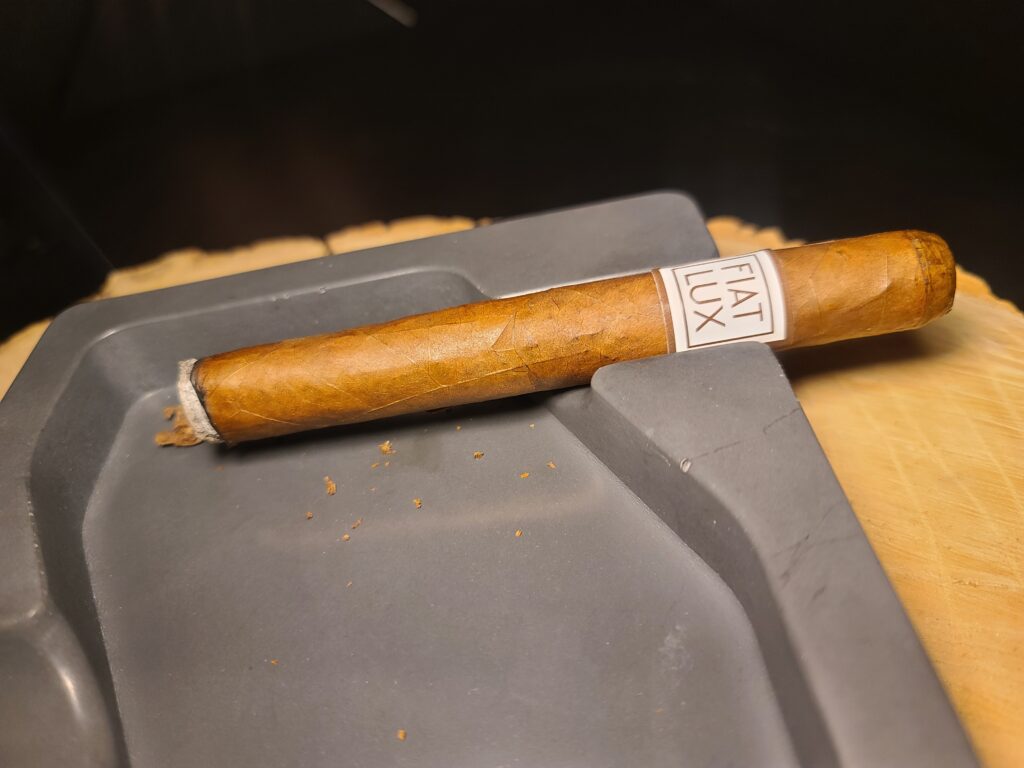 A bit harsh on the light, but there is a freshness to the first few puffs. Baking spices and black pepper overwhelm my palate, with a lightness to it. Milk chocolate on lingers on the finish, with a bit of citrus and leather.

The smoke is as delicate as the wrapper. That’s not to say there isn’t copious amounts produced with each puff, because there is. However, the smoke is light with a creamy like quality to it. 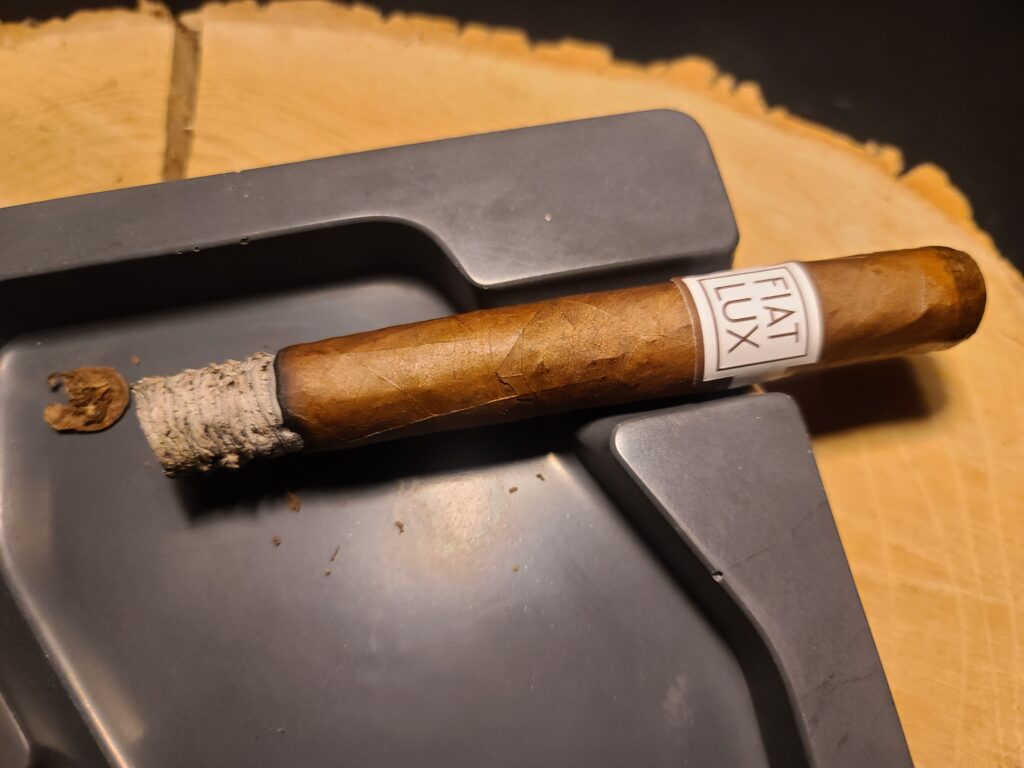 Once the initial flavors have calmed, the Fiat Lux comes to life! Citrus dominates while white pepper and clove rule the retrohale. Sweet cream, chocolate, and a touch of leather linger on my palate. A hint of cedar weaves effortlessly through the other flavors. Palate cleanser indeed! The smoke is creamy, and the burn line is even. The ash, for its part, is white with streaks of black running through, and compact with very few flakes. There is a depth to the Fiat Lux’s first third. It is citrus, wood, and chocolate melded together in the most beautiful of ways. It is creamy and spicy. It is delicate without being boring. 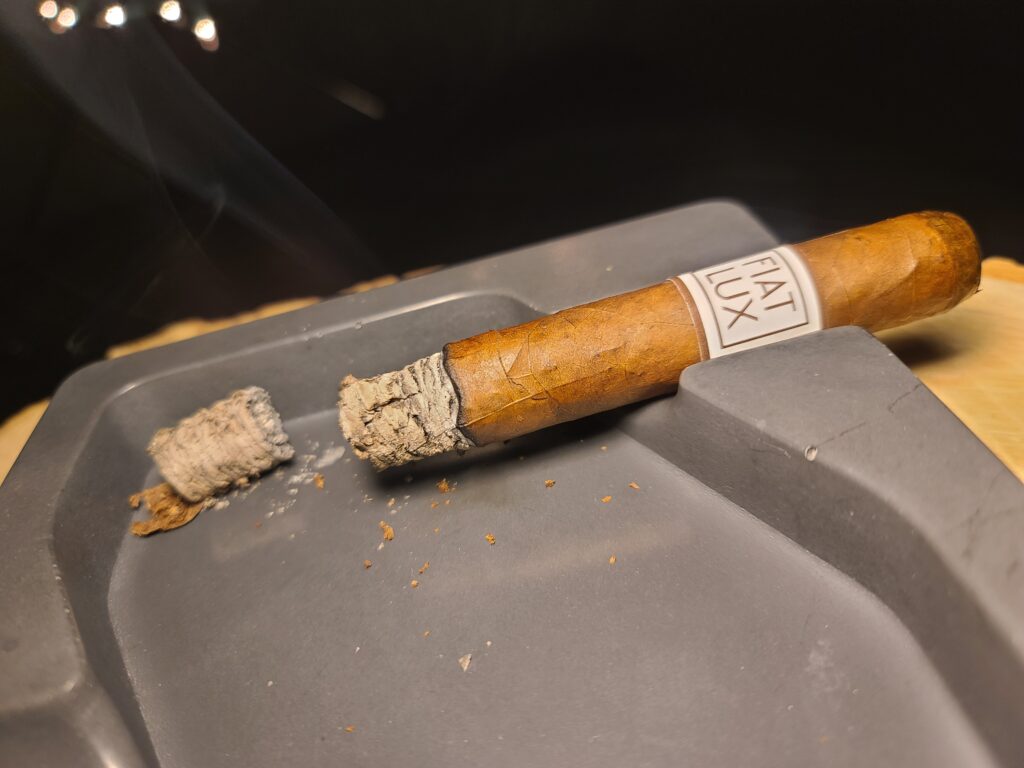 Creamy chocolate, nuts, and a touch of coffee start the Fiat Lux’s middle third. The retrohale is white pepper. Lemongrass on the finish. That brightness adds a remarkable juxtaposition of flavors. The burn line is straight and even. The ash is still compact and gorgeous. A bit of spice begins dancing on my tongue. The smoke remains creamy and satisfying. The spice starts to build, entangling itself with the lemongrass in a most pleasing way. There is a hint of wood that starts to break through. The chocolate note becomes more prominent, lingering on my palate after each draw. The brightness from the citrus remains, as the wood note begins to ramp up, bringing a spiciness with it. 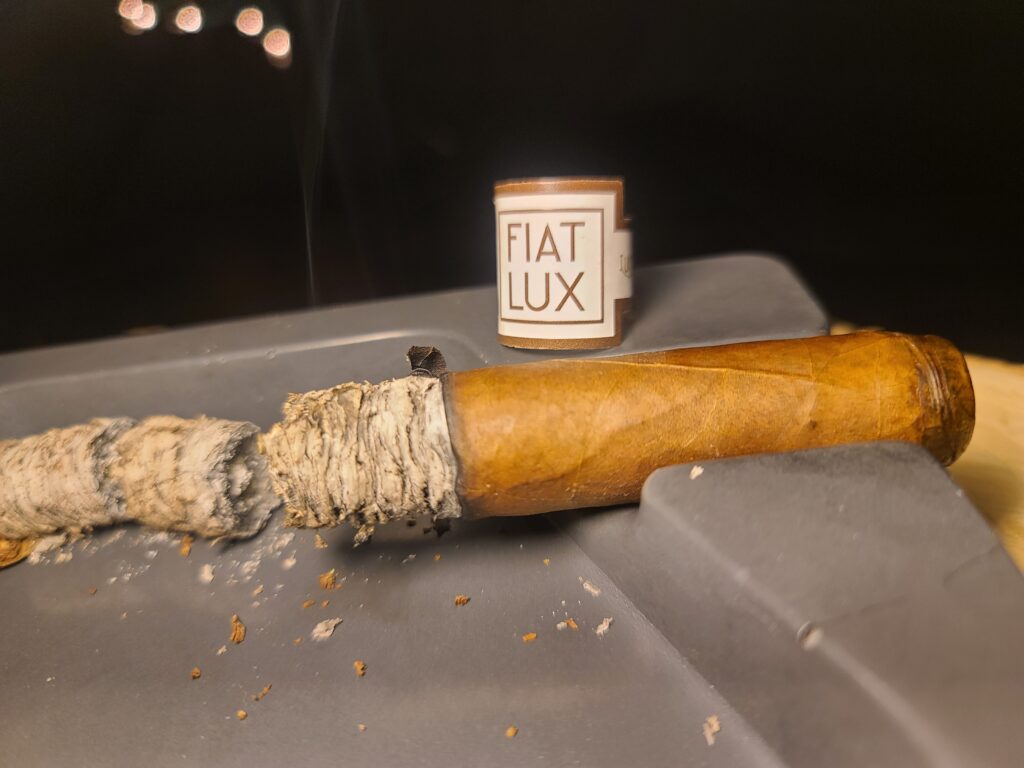 Black pepper on the retrohale heralds the beginning of the final third. The Fiat Lux remains bright as citrus and baking spices have become the backbone of the cigar. Caramel, espresso, nuts, and a note of avocado oil mingle together. There is a richness to this final third; the culmination of the two thirds that came before it. The smoke is rich and creamy. The texture adding to the flavors. The ash is just the slightest bit flakey but is, overall, compact. The burn line is ever-so-wavy, but self-corrects with each draw. Notes of butter and nuts flow in and out of the lemongrass. Bright, complex, and rich. Nuanced flavors of chocolate and espresso come and go, giving the final third the same complexity of flavors found throughout. Black pepper and baking spices are reminiscent of the initial light but are cut by the smooth avocado oil and hint of citrus. Wood and leather join the rich flavors of chocolate and nuts. The burn line is a little uneven, but I don’t mind. The Fiat Lux begins to blast citrus and baking spices. Coffee and charred wood join the citrus and baking spices as the Fiat Lux finishes its glorious journey.

Lemongrass, pepper, cream, chocolate, baking spices, leather. What’s not to like? The Fiat Lux has great transitions between each third, and each third flows into the next. Nothing is out of place in the Fiat Lux. There is a brightness to the flavor profile that makes the cigar unique, in my opinion. It’s different than the normal cigar fare, but not different enough to turn off those die-hard “give me full flavor or give me death” guys.

There were no touch-ups or relights needed with either of the cigars that I smoked for this review. The burn progression for both was pretty similar. At times the Fiat Lux burned razor sharp, and at other points the burn was wavy. However, at no point was the burn in any danger of affecting the enjoyment of the cigar. The ash was a bit more flakey than I like. 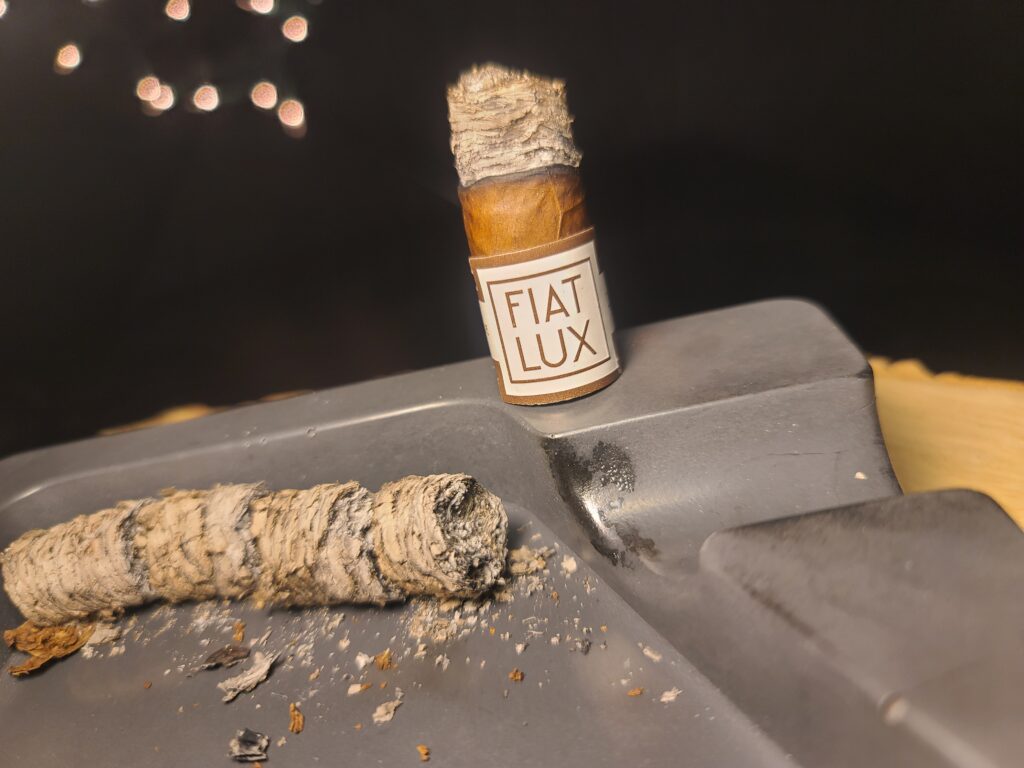 I have to admit that I was a bit skeptical when our friend in the industry told us that the Fiat Lux would, “…make your last cigar and next cigar taste better.” He was right. The lemongrass/citrus note stays with you. It’s the backbone of a flavor profile that is bright, without sacrificing depth and nuance. The flavors actually do enhance your previous cigar and your next cigar! It’s a cigar that has to be experienced to be believed. A medium profile with enough complexity and brightness to keep you entertained to the last draw.