I’m going to let you, the reader, in on a little secret. Apparently, there was some controversy over the box art on the Crowned Heads Four Kicks Mule Kick 2022. Why? Because it has the Mexican flag colors on it. Who, you ask, would have such an issue with this? I have no idea. What I do know is that the Mule Kick 2022 is the first time the Mule Kick line has had a Mexican San Andrés wrapper. Personally, I think it’s a classy touch from Jon Huber and company to feature the flag on the box. On to the deets!

The Four Kicks Mule Kick had been a fairly consistent release until 2021, when Crowned Heads didn’t release the LE. It returned this year and features the same blend of tobacco as before, just with a Mexican San Andrés Oscuro wrapper. The Mule Kick 2022 was rolled in the Dominican Republic, under the supervision of Ernesto Perez-Carillo, at Tabacolera La Alionza S.A. While I have smoked a few of the previous year’s Mule Kick releases, I couldn’t tell you what I thought of them. Nor should that matter. Again, each cigar released should stand on its own merits.

WHERE:
On the deck 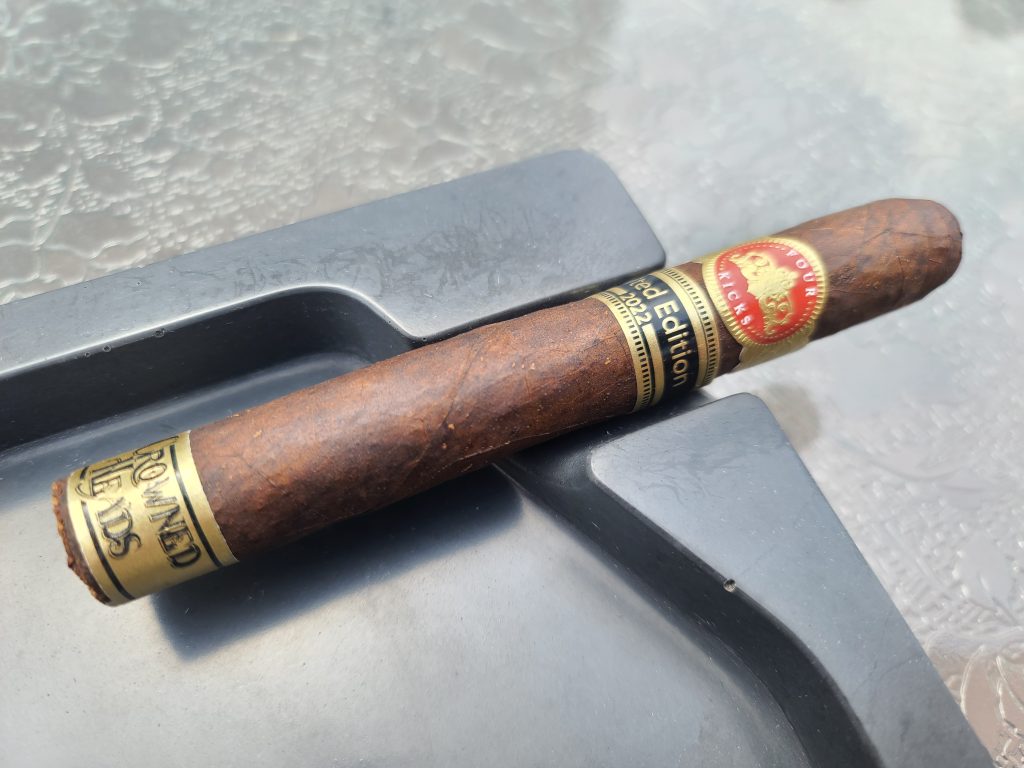 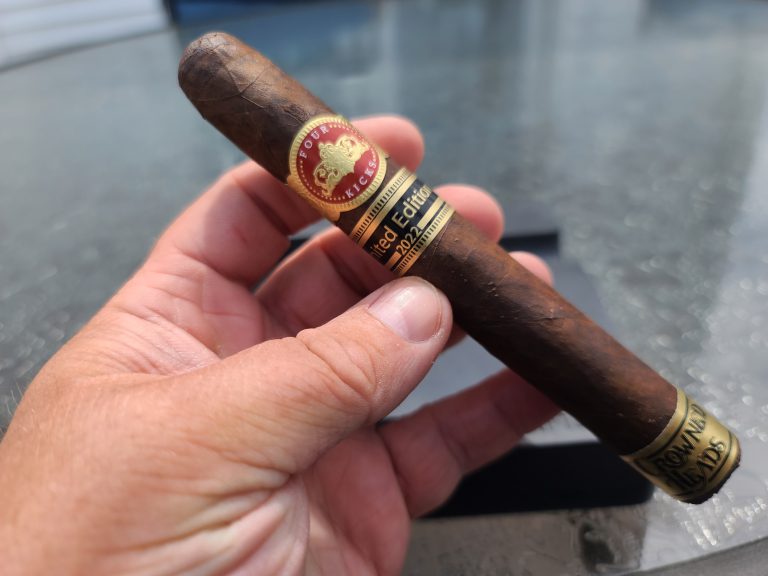 The band on the Four Kicks Mule Kick 2022 is the same as it has been for the last two iterations: triple banded, with one of the bands just above the foot, a “Limited Edition” band that sports the year of the release, and the band of the regular Four Kicks cigar. This has been the design since 2019, when they first added the band near the foot. 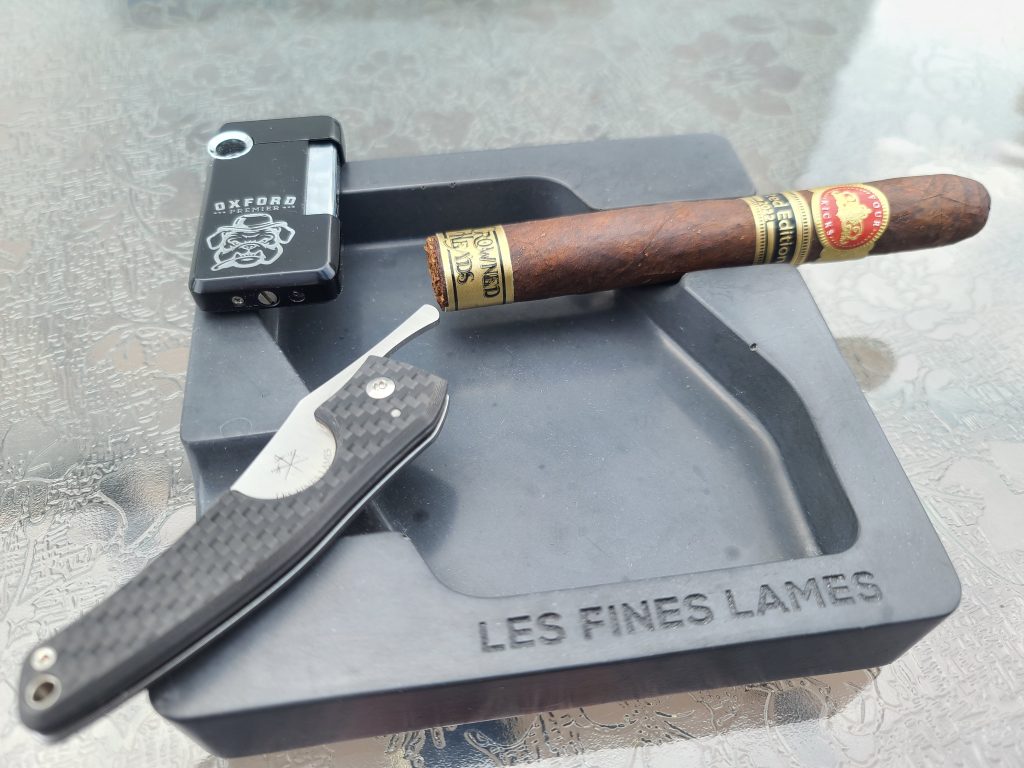 The cold draw reveals notes of milk chocolate, nuts, and a splash of citrus. There might be a hint of fruity sweetness that I detect on the finish. 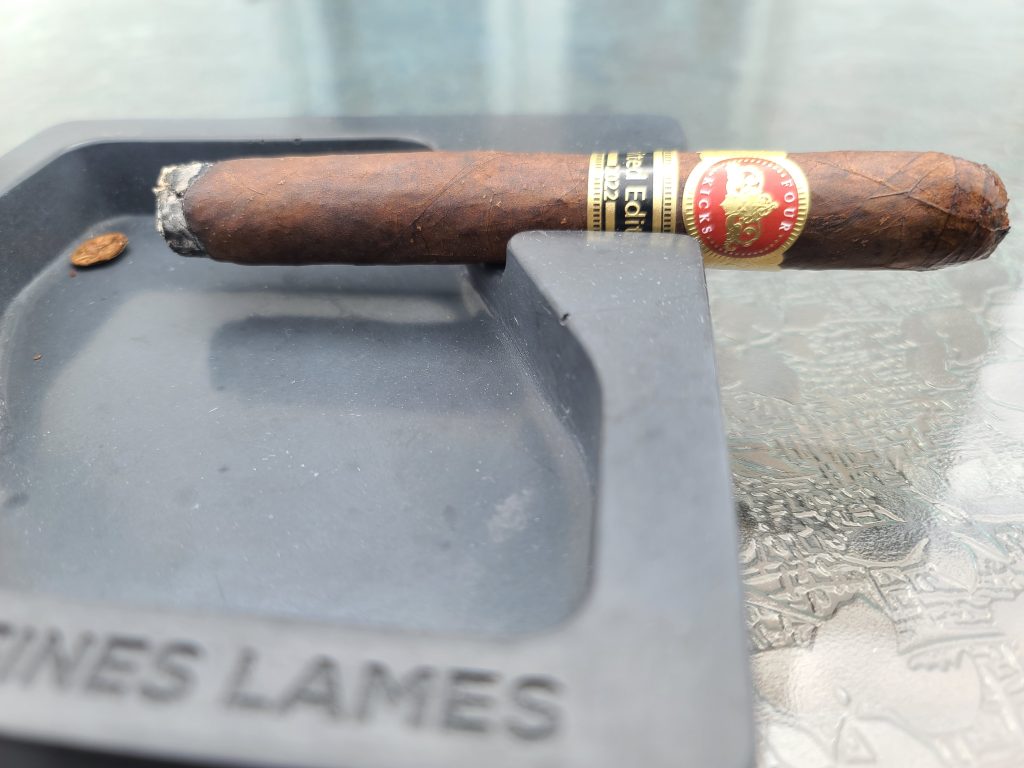 Despite the stiff breeze, the Four Kicks Mule Kick 2022 lights up easily enough; though, the burn line initially suffers (no points deducted due to wind). Chocolate, fruit and black pepper are immediately present off the initial light. There’s a bit of salted nuts coming through, as well. A vegetal note on the finish with just a bit of earth. I’m not sure how much I’m enjoying that note, but the sweetness lingering on my palate helps a lot.

Even with the wind, the smoke output is amazing. I’m a bit shocked at how creamy and satisfying the smoke is. 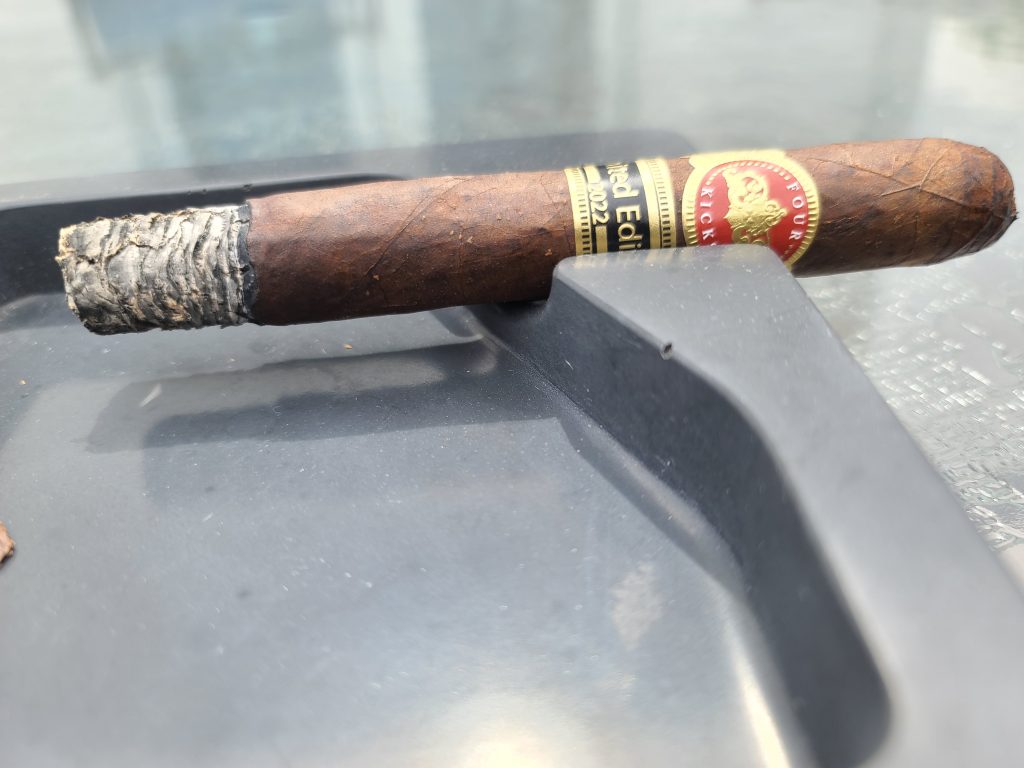 The Mule Kick 2022 is actually holding up to the wind quite well. Chocolate continues to come through strong. Black pepper rules the retrohale. The vegetal note now lingers on the finish. Fruit, nuts, and a bit of citrus on the front end, while it’s mineral and earth on the back. The ash is compact and gray. The burn line is straight, but not razor sharp. As I said, it’s very windy out but the Mule Kick seems unbothered. A nice salted caramel note breaks through. I’m not sure how much I’m enjoying the finish, but I am digging the front end. There’s a spiciness that’s starting to come through and tickle my tongue. 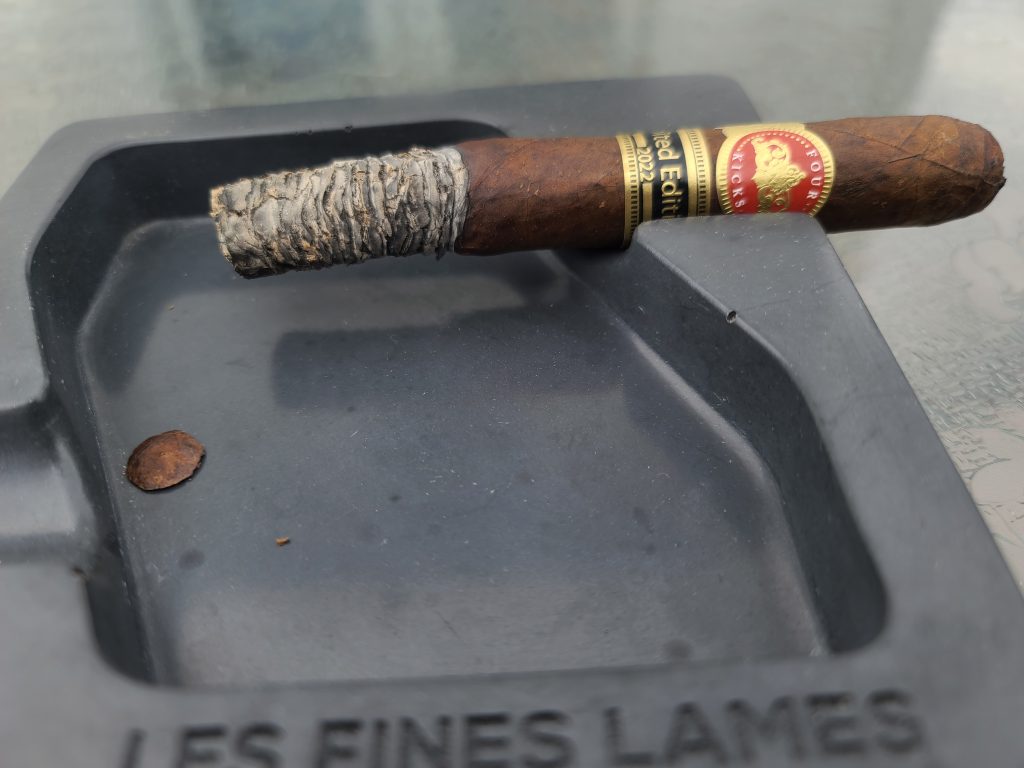 The vegetal/mineral/earth starts coming through on the front end with a bit of red pepper. The chocolate is gone but it’s replaced by a more floral note. Avocado oil adds a certain creaminess to the mix, and baking spices on the retrohale. The ash is still holding, despite the wind. I dare not continue to tempt fate and gently deposit the ash into the tray. A few flakes come off, but it holds its shape. A bit of leather on the finish now and a hint of fruity sweetness. These flavors are rich and decadent. Chocolate returns to the forefront, along with salted nuts. Both notes complimented by the baking spices and white pepper. It reminds me of a crispy chocolate cookie that’s just a bit over cooked. The finish is buttery and smooth. I am more than impressed with the construction, but I needed to deposit the ash prematurely to remove the bands. 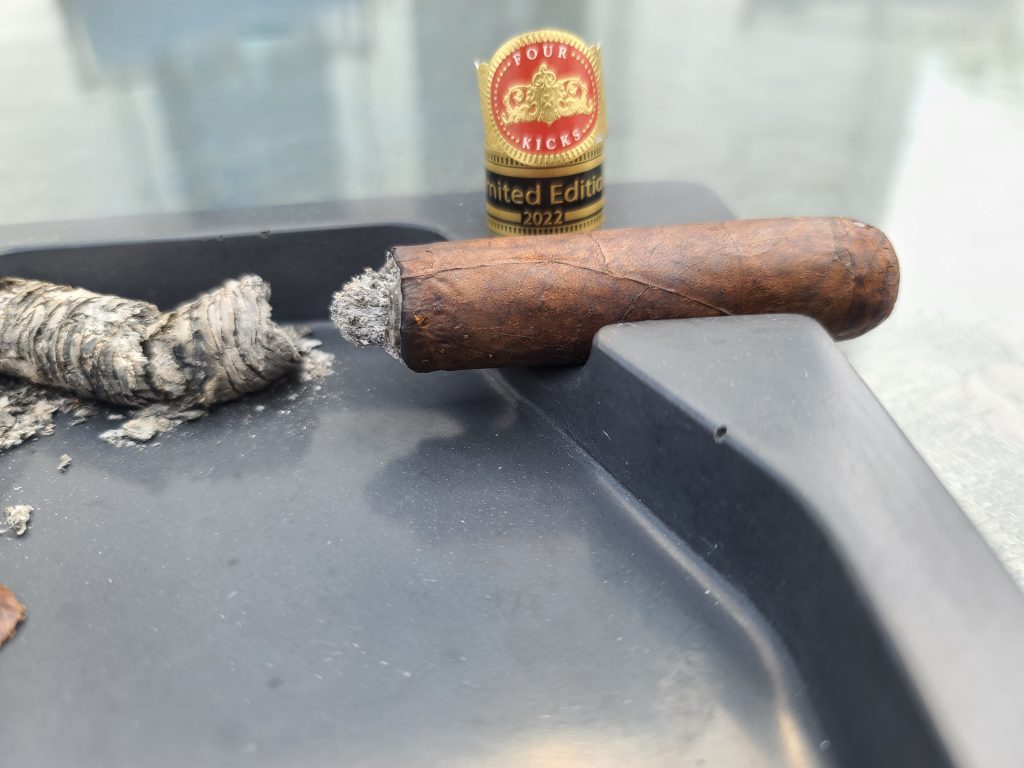 The final third is more chocolate, baking spices, and a hint of pepper. It is smooth. There is a buttery note that adds to the creaminess of the chocolate. A little bit of nuts and honey start coming through, as well. Fruity sweetness lingers on the finish. The earthy vegetal note is still there but it is over powered by the sweet nuttiness. Black pepper and baking spices really come through with each retrohale. There’s a saltiness to this final third that is enhancing all of the flavors. About halfway through this final third a nice mushroom-like note begins to mingle with the other flavors. A wood note adds it’s voice to the mix. Still buttery smooth and with just the right amount of spice. Salty, sweet, savory, and spicy. The Mule Kick is hitting them all.

The Four Kicks Mule Kick 2022 is certainly not boring.  The first third, in my opinion, is the weak link in the Mule Kick. But that doesn’t mean that it isn’t good. The flavors always meshed together well, except for that vegetal note in the first third. After smoking three, I’m almost convinced that the vegetal/mineral note is just a strong citrus coming through. There was a complexity to the Mule Kick that was impressive, with each draw uncovering layers of flavor.

Here is where the Mule Kick 2022 really blew my mind. Despite there being a very strong wind on two of the days I smoked a Mule Kick, the cigar only waivered after the initial light. While the wind prevented a razor sharp burn line, the burn was always straight. There were never any touch-ups or relights needed. The construction of the Four Kicks Mule Kick 2022 is some of the best I’ve seen in a cigar. 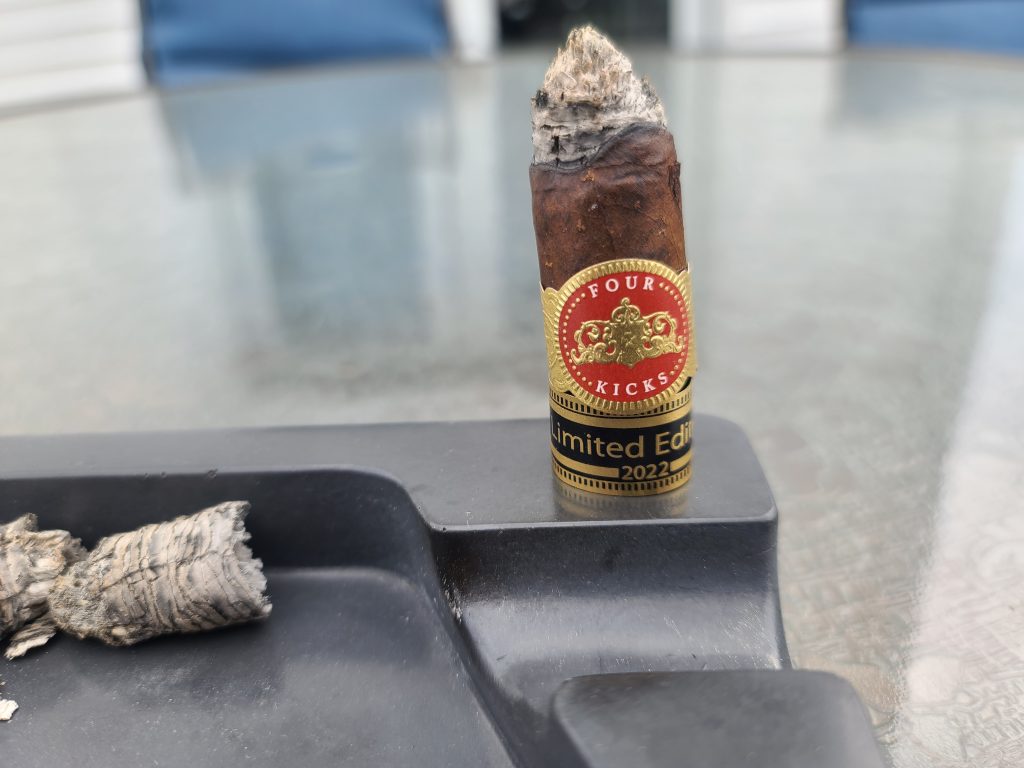 BEST CIGAR OF THE YEAR?

That’s a tough call only six months into the year, but the Four Kicks Mule Kick 2022 from Crowned Heads is certainly making a strong case as my early frontrunner. Obviously, we don’t do CotY awards here, but if we did this is in the top 2. The notes of chocolate, earth, pepper, baking spices, nuts, caramel, citrus, floral, wood, and vegetal mesh together so well. They weave in and out adding complexity and nuance where these normally overpowering flavors seem almost delicate. The smoke is creamy and smooth. The construction? Just wow. When it can stand up to wind gusts and sustained breezes easily…well, there aren’t many cigars that can do that. If you can find a box of Crowned Heads Four Kicks Mule Kick 2022, do yourself a favor and buy it!