In 2019, Punch Cigars began celebrating the Chinese New Year with a new release. I applaud their creativeness and avoiding, yet another, Chinese zodiac release…except, that’s it’s another Chinese zodiac themed release. The inaugural release, the Punch Eggroll, was amazing. This was followed by the Chop Suey in 2020, and the Kung Pow in 2021; both were good in their own right. So much so, that I went out of my way to buy the “Bento Box” containing each of these three previously released cigars. What really sets Punch’s Chinese zodiac themed releases apart from the others, besides its take-out themed names, is the price. At an MSRP of $5.99 a cigar, you’re just in a different ballpark from the Davidoff or Plasencia’s Chinese Zodiac releases.

The Fu Manchu has a Honduran wrapper over an Indonesian binder and Dominican, Nicaraguan, and Mexican fillers. It also features a long pigtail that originates under the cap (that is a lighter shade than the rest of the wrapper), not on top of, and reaches almost halfway down the cigar. Punch’s press release on the Fu Manchu reads in part, “For the 2022 release, we went old school, replicating a maniacal kung fu master’s white hair and long goatee with a blonde cap and extended pigtail. Whether you’re watching Kung Fu Theatre or karate kicking back with friends, Fu Manchu breaks bricks on both flavor and price.” 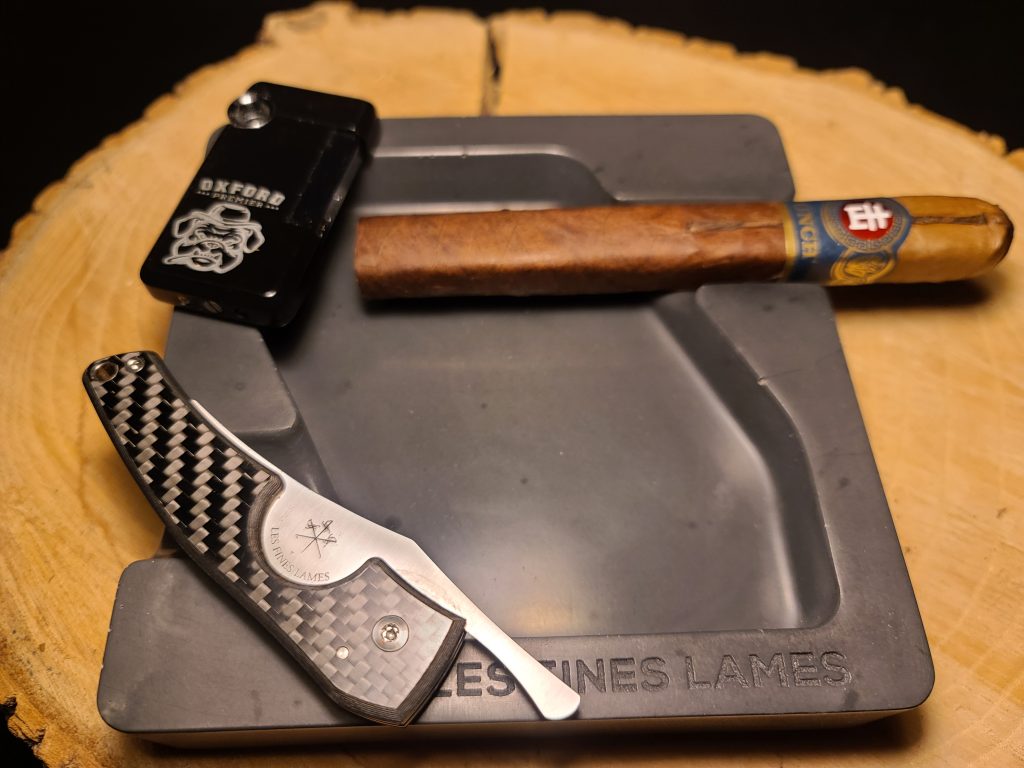 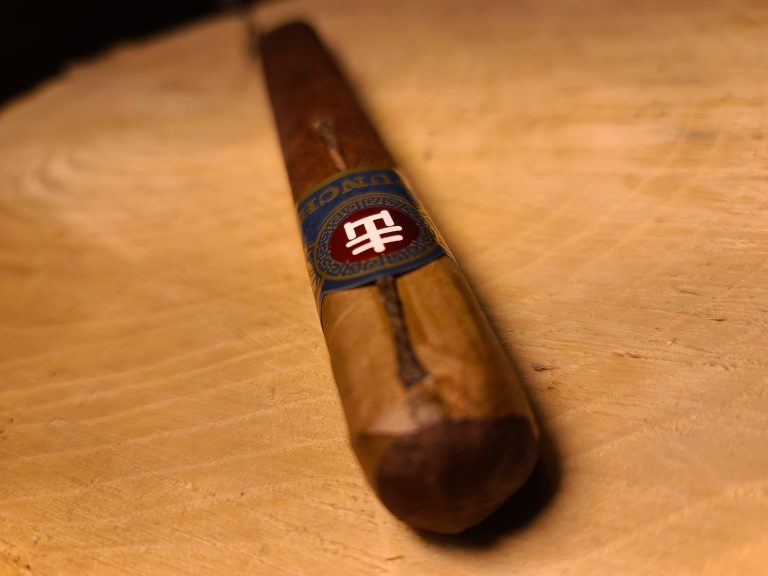 The band, in many ways, reminds me of the Punch Clasico band. The colors are a blue/black background, a red logo in the center, and gold trim. This might be my favorite band from all of Punch’s zodiac cigars. There’s an elegance to the band that the others are missing, except for maybe the Egg Roll.

I’m also going to quickly touch on the box for the Punch Fu Manchu. It’s round and it’s made of cardboard. I get it…it’s a sub $6.00 cigar; but you’re celebrating the Chinese New Year. While I love the fact that the Fu Manchu, Egg Roll, Kung Pow, and Chop Suey are inexpensive when compared to the likes of other zodiac releases from Drew Estate, Plasencia, and Davidoff, presentation still matters. It’s a box-pressed toro that comes in a cylinder? It’s such an odd choice. 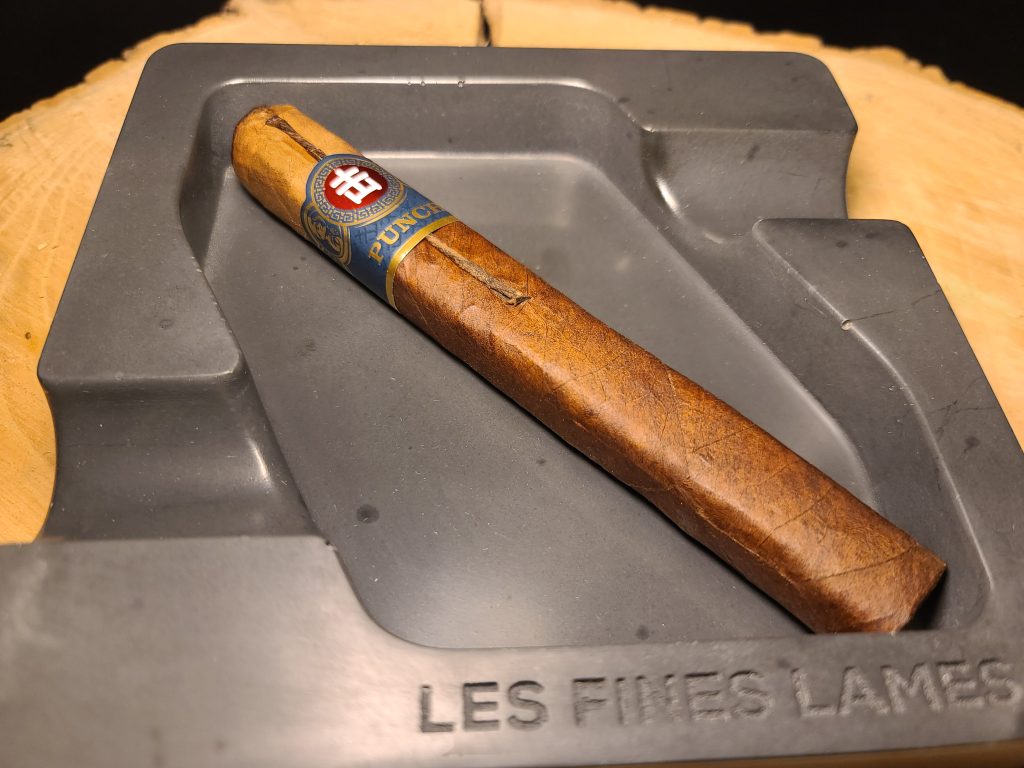 The wrapper is rough to the touch and toothy. With the right light, pockets of oil shimmer off the wrapper. It’s interesting to see a difference in color between the wrapper and cap, and the final bit of the Fu Man Chu. The star of the show is the long pigtail that begins under the cap, and runs almost halway down the cigar. 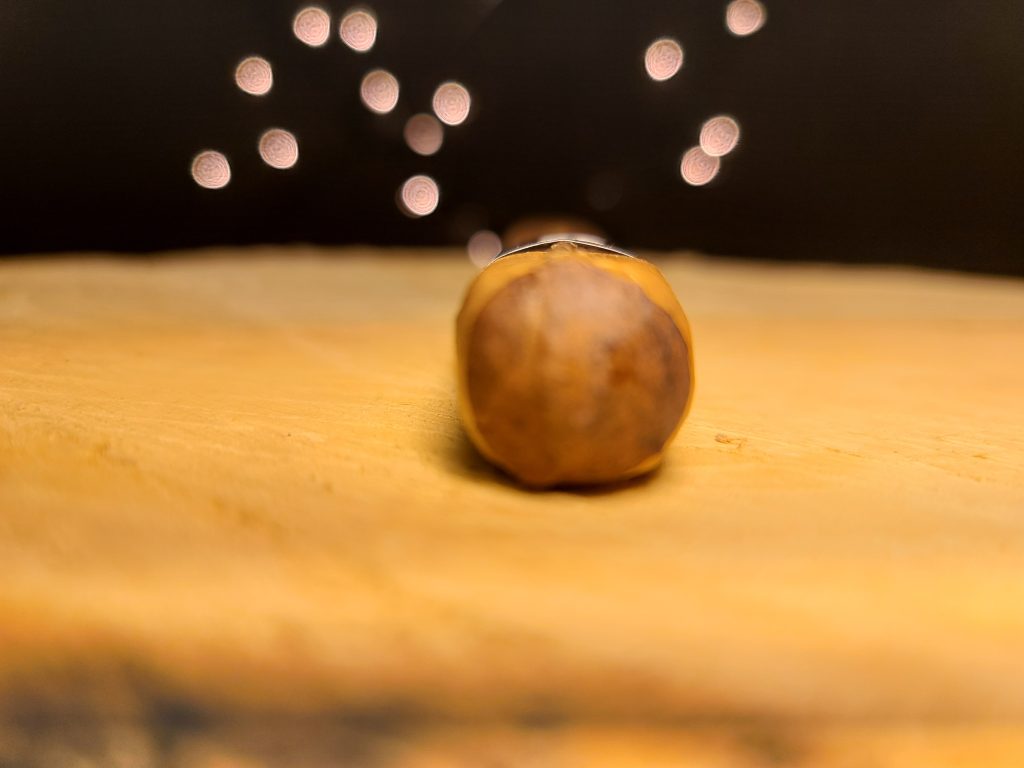 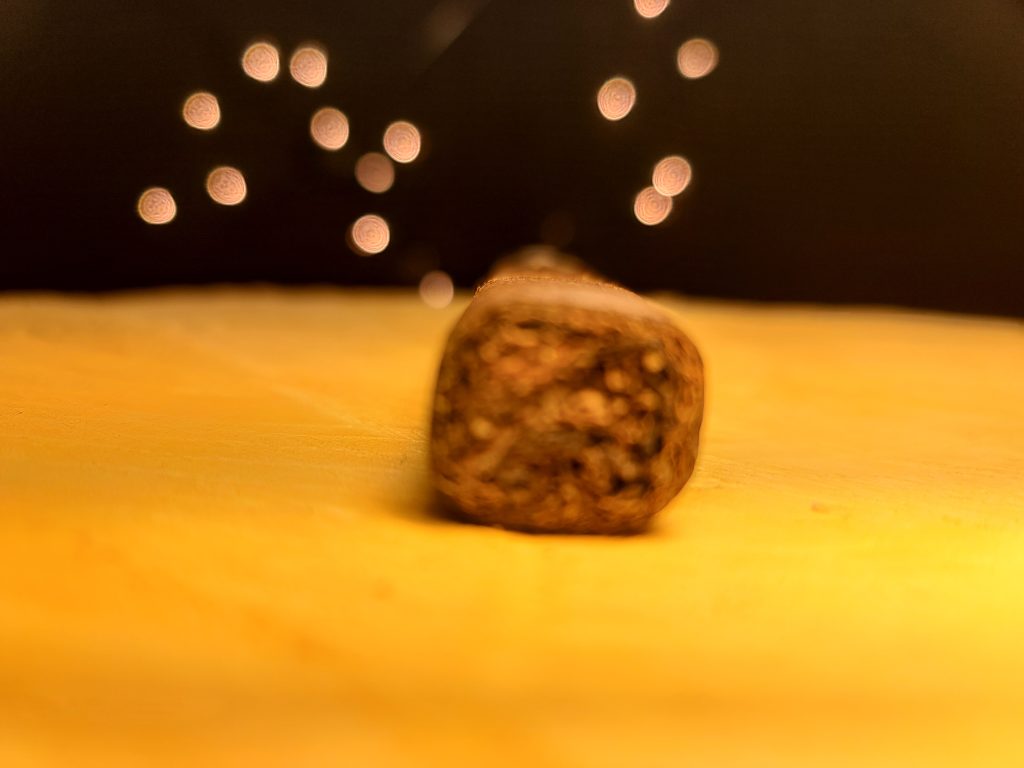 Notes of barnyard, earth, and nuts waft from the wrapper. The foot, however, is much different. There is a bread/yeast note that dominates the foot. It’s reminiscent of a croissant. There’s also a very pleasant floral note that lurks in the back.

The cold draw reminds me of fresh bread and jam. Just a wonderful mix of fruity, bread, and a hint of nutmeg and clove. The draw has the right amount of resistance, and I am chomping at the bit to light it. 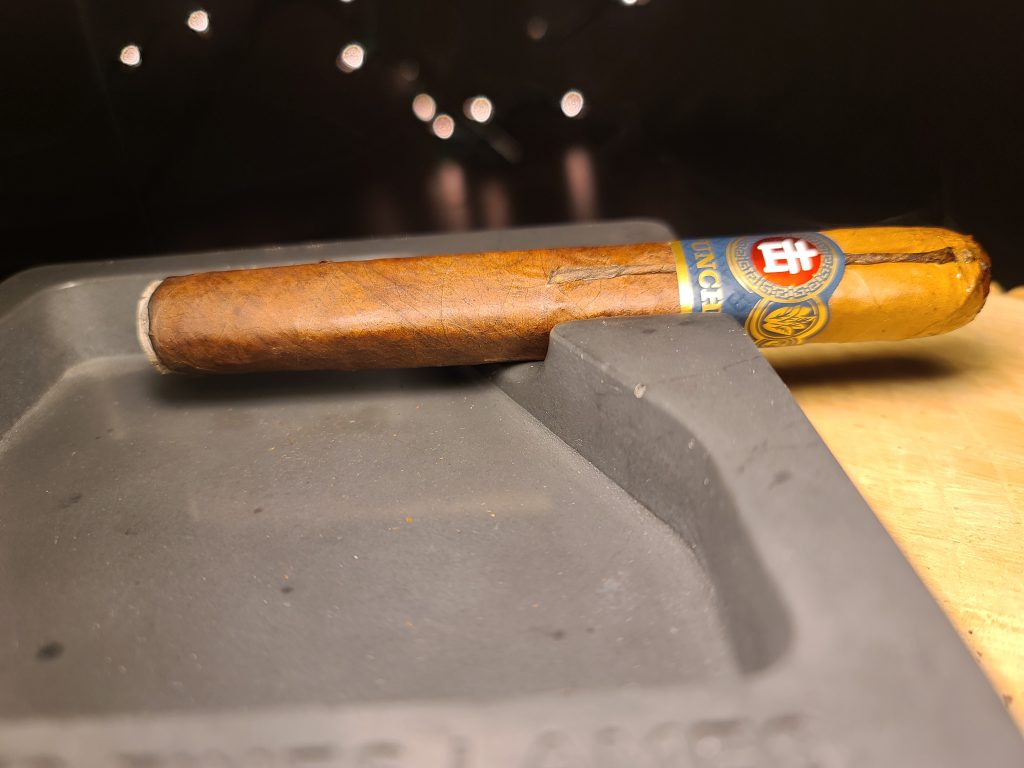 The Fu Man Chu packs quite the initial punch. Black pepper, baking spices, and stone fruit attack the senses. The bread/yeast from the cold draw is there, but it is overwhelmed on the initial light. The fruit lingers on the palate.

The right amount of smoke fills my mouth and coats my palate with each draw. It isn’t a creamy smoke but it isn’t a dry smoke, either. Nor is it a billowing smoke stack. The Fu Man Chu seems to be content with balance. 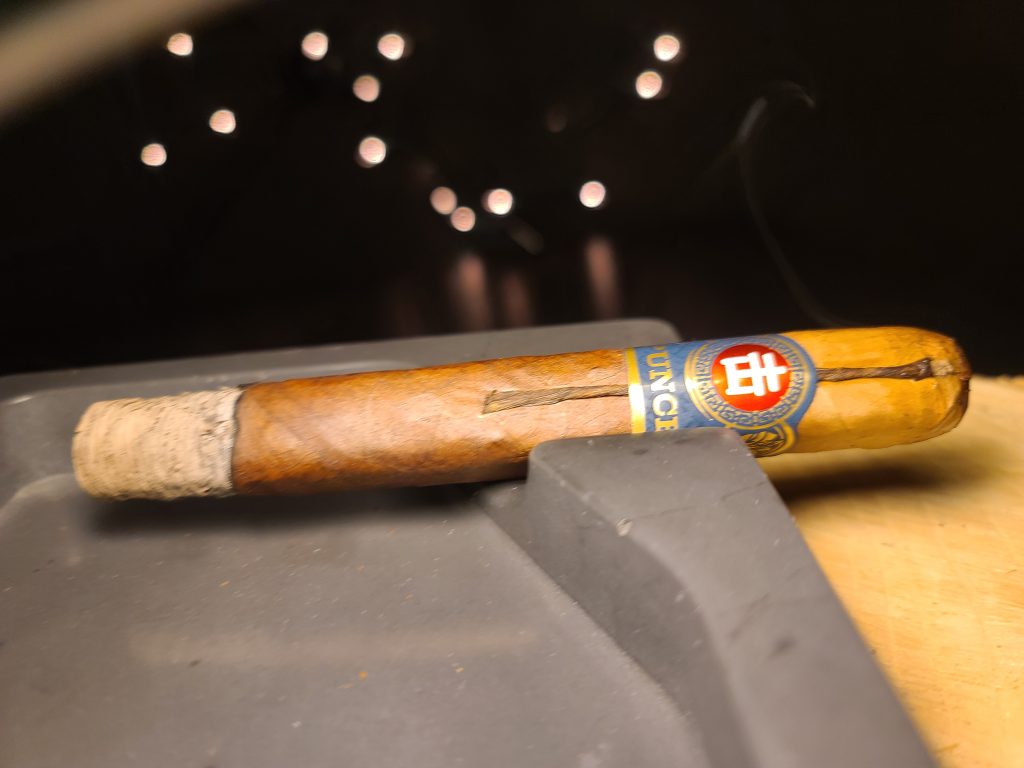 The first third settles in with toast, fruit, and nuts. There’s a bit of leather that begins to come through. Black pepper rules the retrohale. The burn is a bit uneven, but doesn’t look like it will cause any trouble down the road. The ash is a stack of dimes, white, with thin streaks of black running through. I’m enjoying this first third. A bit of coffee begins to overpower the fruit, with salted nuts on the finish. There is an aftertaste of stone fruit. The burn line begins to even out. The flavors are, so far, well-balanced and proportional. The fruit begins to weave in and out, cutting through the richness of the Fu Man Chu. It’s the star of the first third, no doubt. A note of chocolate begins to come out of the fruit note. It has an almost artificial flavor that gives a store bought pudding quality to it. It’s not off-putting; in fact, I kinda’ like it. 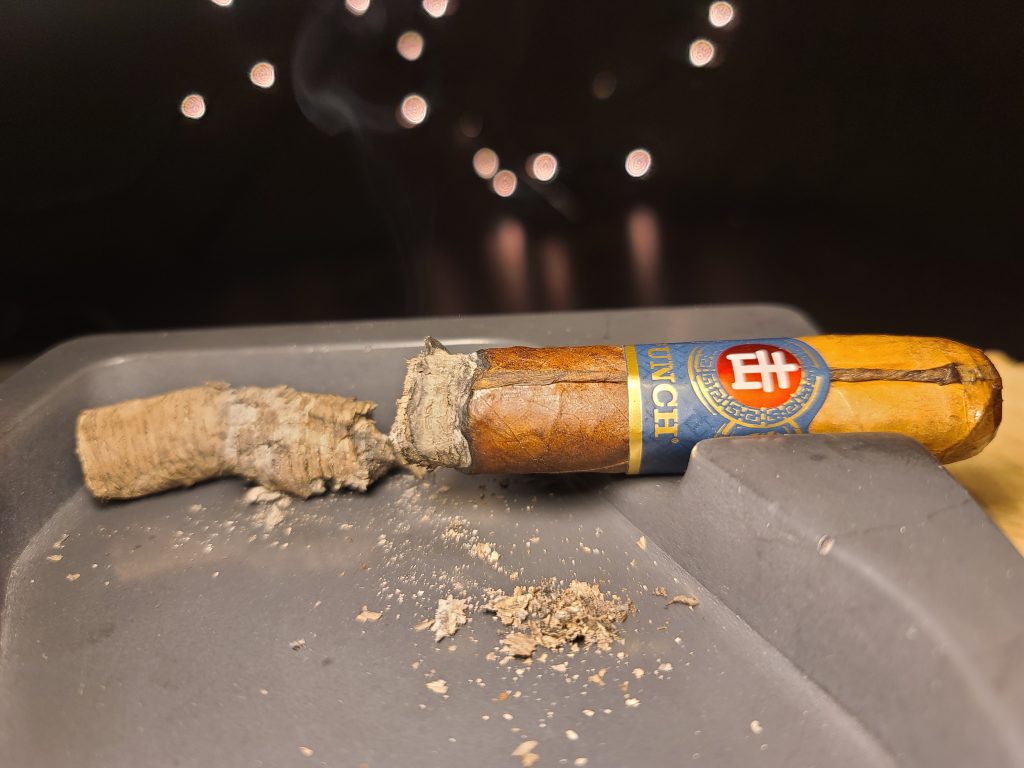 Hot chocolate, cedar, and leather begin the middle third. Black pepper still reigns on the retrohale, but it is accompanied by a hint of baking spices. The chocolate has really developed from an artificial taste, to something much more refined and rich. It is complimented by the spice if the cedar, but I find myself wishing there was more spice. The retrohale has hints of it, but nothing is really cutting through the richness. The smoke is creamy now and very satisfying. Baking spices begin to develop, as cinnamon, cloves, and nutmeg linger on the finish. The ash has a few flakes where I rolled it in the ashtray, but is overall compact and beautiful. The burn is straight but not razor sharp. Wood, leather, coffee, chocolate, pepper and a hint of spices. A bit of citrus really livens up the second third. My lamenting the lack of baking spices was premature. They are here now and in full force. They are complimented by the chocolate and cedar notes. The bread/yeast from the cold draw finally arrives and brings this middle third to its zenith. 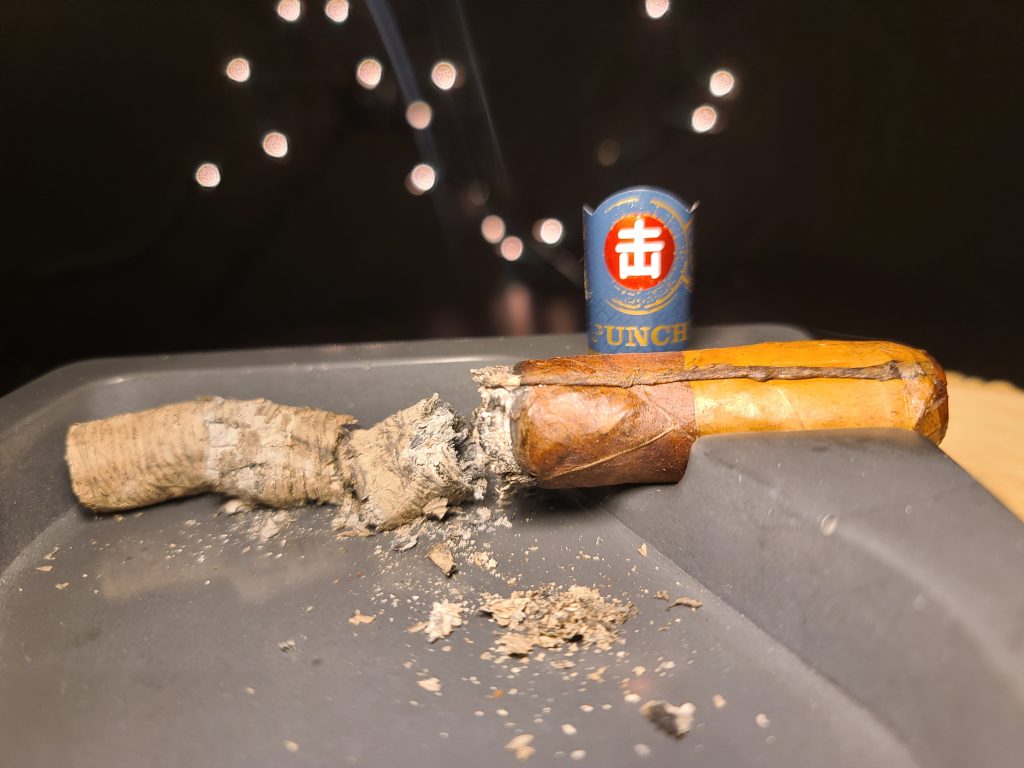 Notes of citrus, charred wood, and coffee begin the final third. There’s a slight fruitiness lingering on my palate. White pepper on the retrohale. Baking spices are there but are quickly overshadowed by the full citrus note. The Fu Man Chu is good. Real good. Though, the burn line is now wonky. I blame the tail that runs down the front. While it’s a great aesthetic, I’m not sure how practical it is. The burn eventually corrects itself. The smoke continues to be creamy and oh-so-satisfying. Sweet cream, bread, citrus, and white pepper are dominant, with a hint of charred wood. The Fu Man Chu gives up a nice blast of salted dark chocolate, campfire, and baking spices. The citrus is still front and center, but it’s a nice change of pace. The final third was a spicy, citrus, chocolate bomb in the best possible ways.

The Fu Manchu packs a lot of different flavors in it. Over smoking three cigars for this review, what stands out the most to this reviewer is the citrus in the final third. That, for me, is the star of the show. but it takes you a full two-thirds of a cigar to get there. Not that the first two aren’t enjoyable. The beginning of the Fu Manchu has great notes of fruit and nuts. The middle third is full of richness, but it isn’t until you get closer to the final third, that the baking spices start to cut through it.

I ask myself, “Did the burn affect the smoking experience?” The answer is a resounding “No.” But was the burn perfect? Is it ever? There were several instances where the burn line would go wonky, but the Fu Manchu always corrected itself. No relights or touch-ups required. 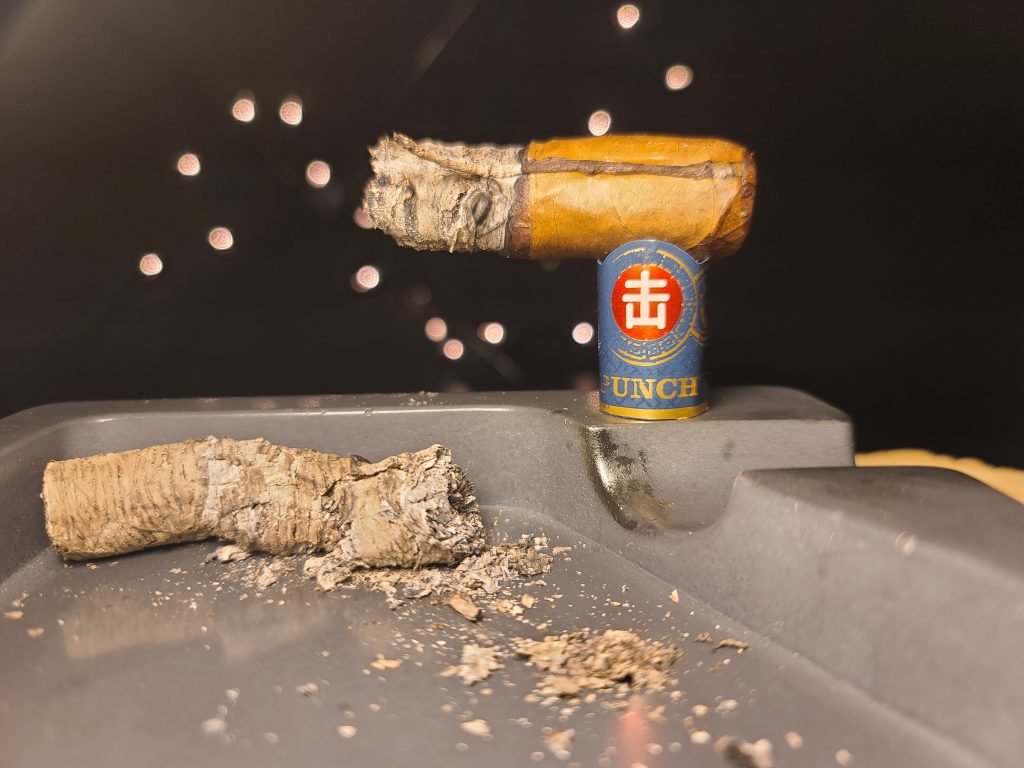 MASTER OF THE ZODIAC.

I’m going to say something controversial: I prefer the Fu Manchu over the Davidoff Year of the Tiger. Why? Price, for starters. But it goes beyond price. The Davidoff YotT was a one note wonder, that had little personality and couldn’t keep me interested in it. It was good, but boring. The Fu Manchu is anything but boring. The flavors come and go, keeping you interested as you smoke it. Big notes of wood, citrus, and black pepper give way to baking spices, chocolate, and sweet cream. It’s just a more interesting cigar. Is it gimmicky? Sure is. Campy? Like an old school kung-fu movie.