In the last year, I have become a great fan of Blackbird Cigar Co.’s regular production cigars. I was actually introduced to them by Lucas from Oxford Cigar Company, when I interviewed him for a podcast episode. Their core line of cigars are very good and something that I’ll order or grab from whatever B&M I happen to be in. So much so, that when the Macaw shipped in August of last year, I immediately ordered a couple to review. At $16 MSRP, it was a little steep for me to spring for a box. While I do enjoy their core blends, this was the first LE from Blackbird Cigar Co. and, to be honest, I was hedging my bets. After being told by those who had tried the Macaw that the unkind reviews of the cigar may be warranted, I decided to let mine sit for a while and see how they turned out with a few months rest.

The Macaw uses a Cuban-Seed Brazilian wrapper over an Indonesian Sumatra binder and Dominican and US fillers. I’m not sure why anyone specifies “Cuban-Seed” anymore because, as cigar smokers should have learned long ago, the soil has much more to do with how the tobacco turns out than the seed’s pedigree. But I digress.

WHERE:
In the garage

HOW MANY CIGARS SMOKED:
2 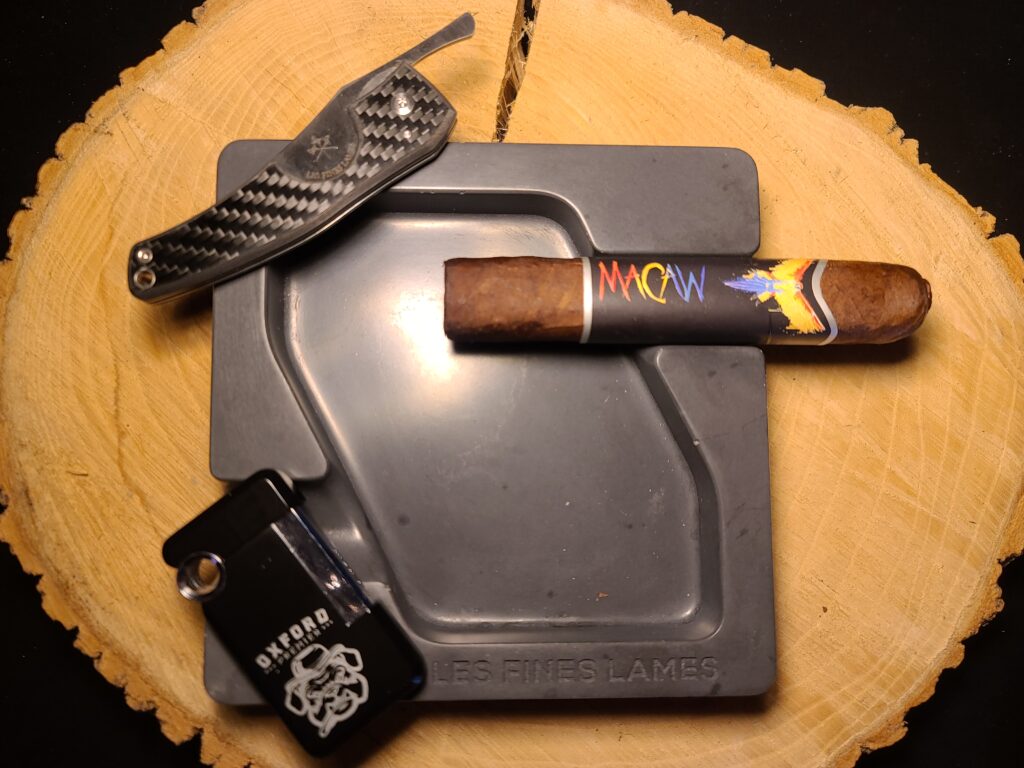 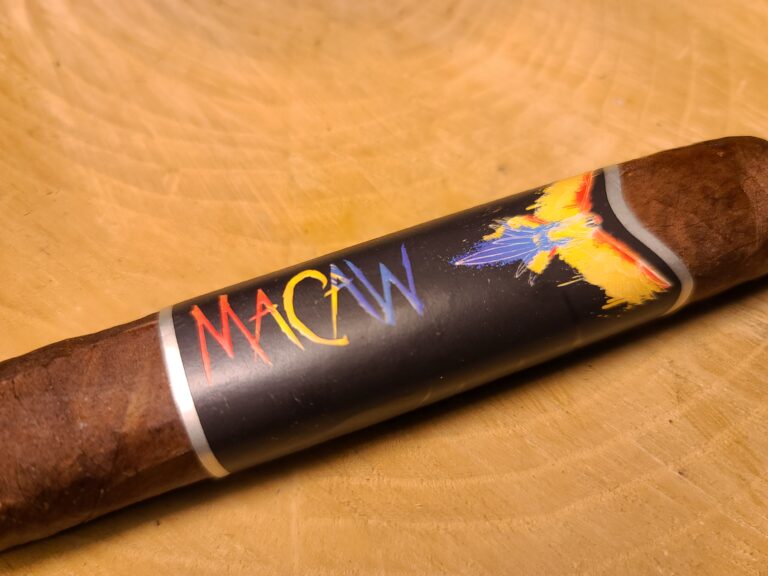 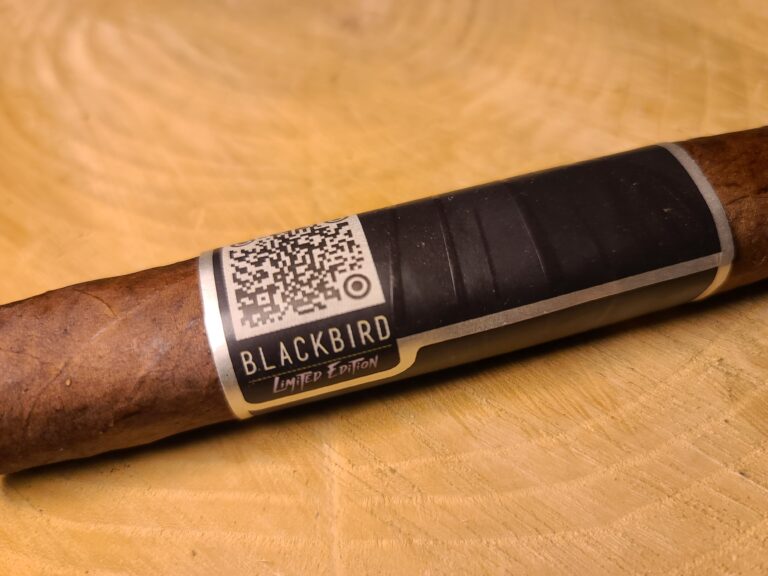 I’m not sure why having these large bands that cover the majority of the cigar are a thing right now, but I kind of hate the trend. It covers up the wrapper and just gets in the way. Despite this trend, the Macaw band is colorful and simple. Beautiful, really. The black background makes the colors pop. The front sports the name Macaw and the logo, while the back has a QR code. The QR code doesn’t give you any information on the cigar or the company, but it does let you see an AR parrot fly in your room. Of course, you have to download an app for that 10 seconds of “Oh, that’s neat…I guess?” 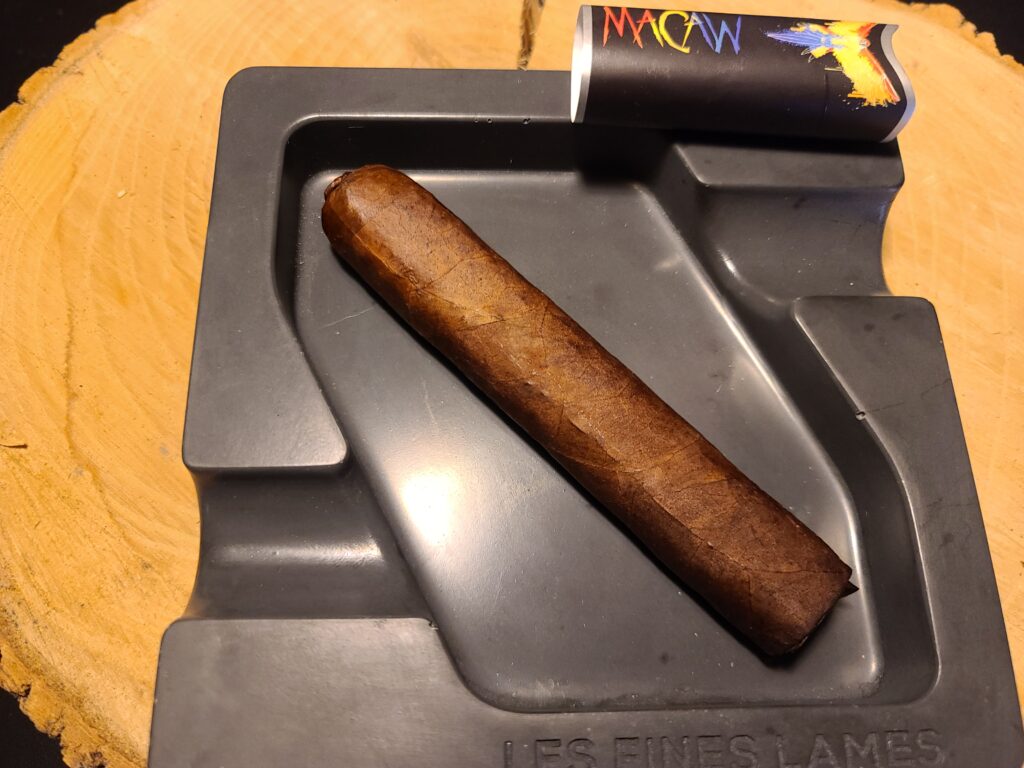 The wrapper is dark, gorgeous, and oh-so-toothy. The pigtail cap looks almost perfect. There are several veins that give the Brazilian wrapper character. The lone flaw is on the closed foot, where part of the wrapper was bent back on one of my cigars, exposing a tiny area of filler. Otherwise, the Macaw looks amazing. 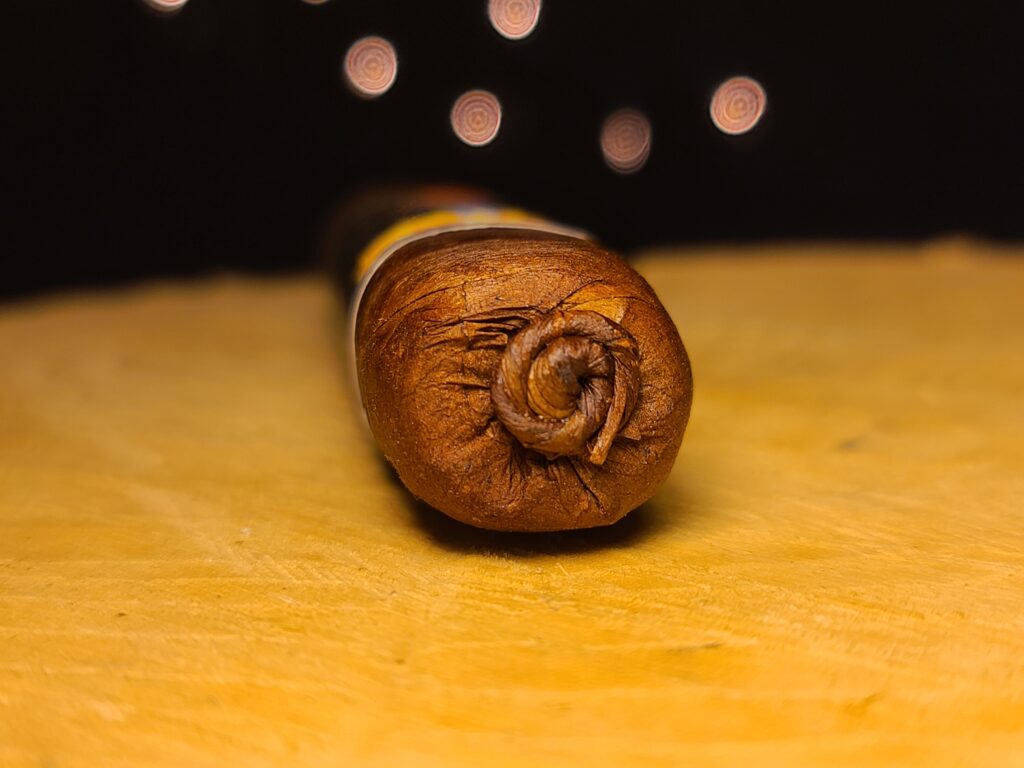 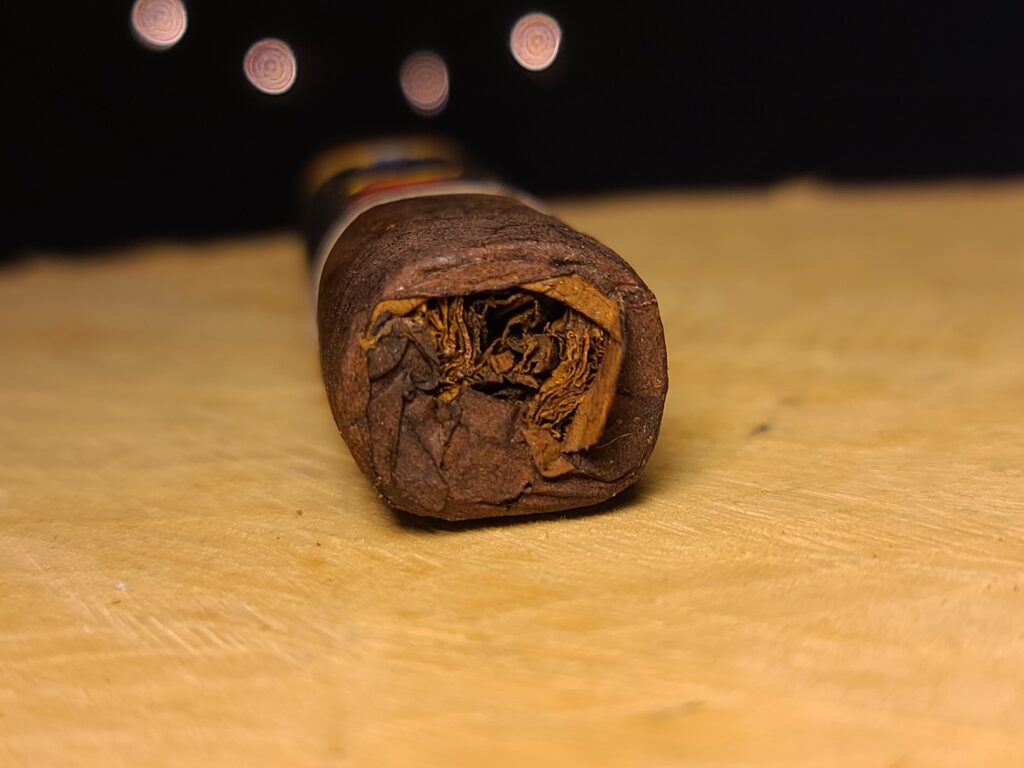 The Brazilian wrapper has a faint floral note, followed by the smell of sweet tobacco. The foot gives off notes of hay and a musty, almost barnyard-esque note.

Despite being a (mostly) closed foot, the draw is very open. This is a bit concerning, but only occurred on one of the Macaw’s that I smoked for this review. Subtle notes of fruit, honey, and wood are followed by a rich chocolate note that lingers on the finish. 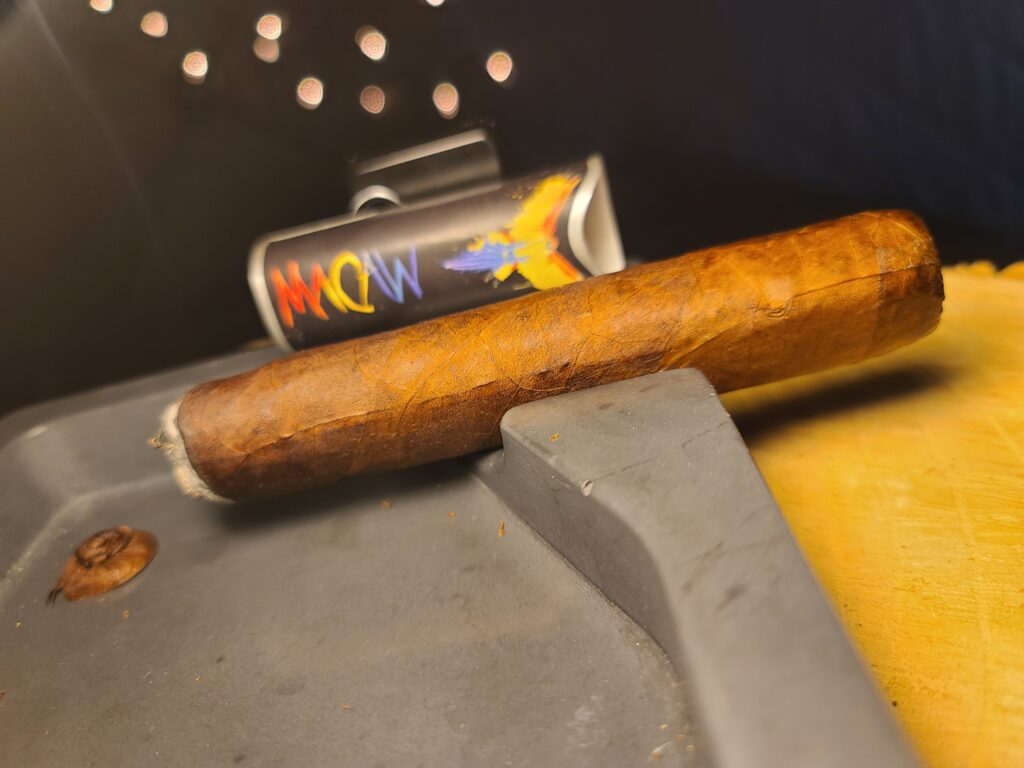 Things are immediately amiss. The first Macaw that I smoked saw the Brazilian wrapper as salty and spicy off the light. It also needed to be lit and relit several times. It just kept going out. It took a full five minutes of lighting and relighting to get it to stay lit. Notes of red and black pepper mingle with honey, oak, and a touch of citrus. The flavors from the initial light hammer at your senses. Though, “assault your senses” probably works better. This might be due to the fact that it refused to stay lit. The second Macaw that I lit did not have this overbearing and rather off-putting beginning. In fact, it was more subdued and kind of meh. The rest of the review is accurate for both Macaws smoked.

The smoke is creamy and plentiful. It chugs along like a steam engine, even at rest. 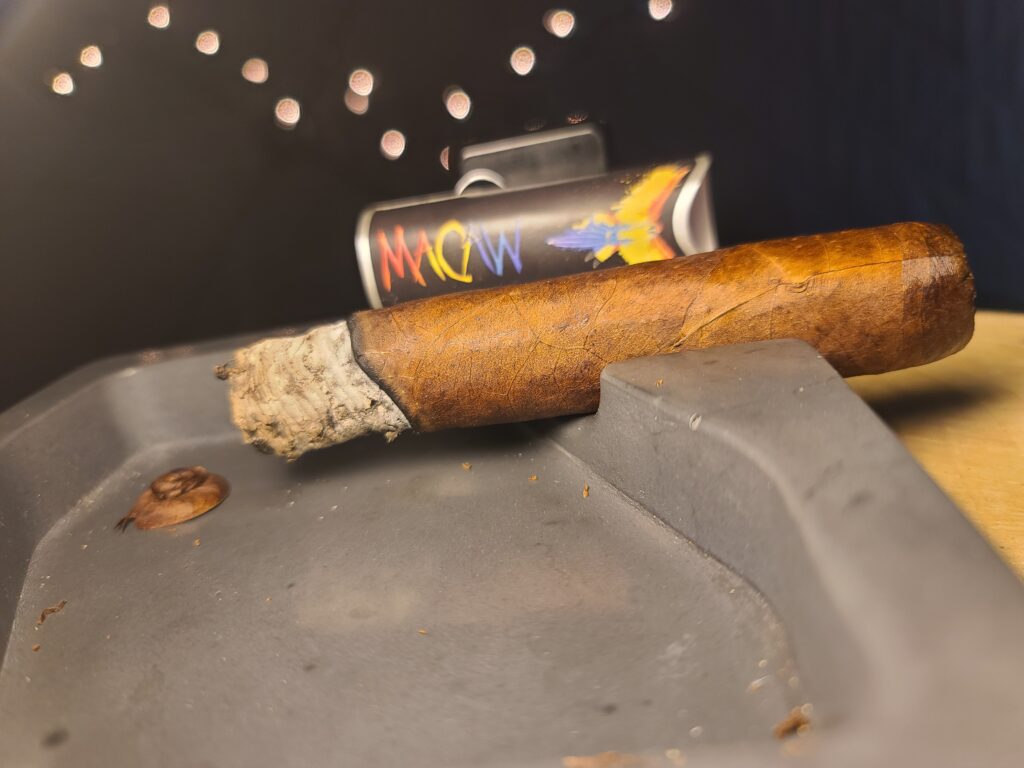 Notes of pepper and coffee with a hint of citrus begin the first third. It isn’t the straightest of burn lines, but it will do. Red pepper flake rules the retrohale. The Macaw is spicy with a touch of sweetness. A cedar note lingers on the finish. The ash is white and compact. The burn is uneven. There’s brightness to this first third that serves as a nice juxtaposition to the richness and spiciness, but I can’t quite tell what it is. The coffee note is now accompanied by an almost mushroom like flavor. Earthy, meaty, and musty. If dank had a flavor, the first third of the Macaw would be it. Every time I think I taste a citrus or caramel note, it’s immediately overpowered by earth and coffee. The Macaw starts to mellow out a bit, but the pepper still stings my nostrils and claws the back of my throat. The burn line gets more uneven with each puff. Wood begins to dominate the flavor profile. The caramel note becomes much more recognizable. The ash continues to be compact and is holding strong. The citrus note is finally coming through loud and clear. 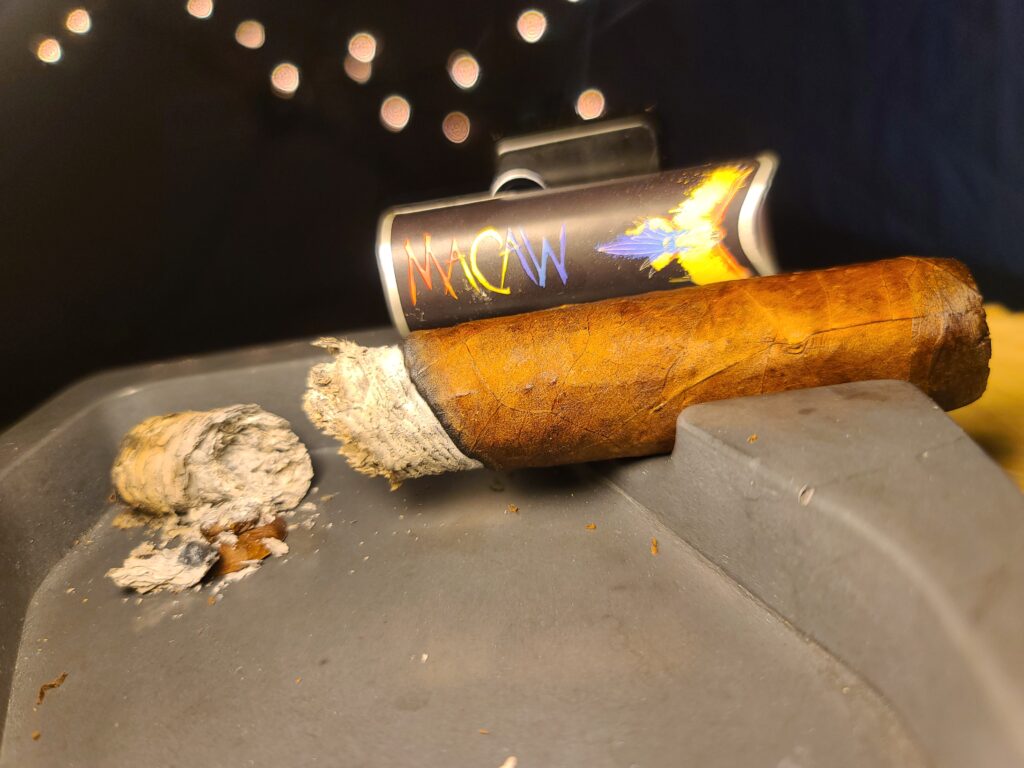 Burnt coffee, cedar, and avocado oil begin the middle third. There’s a touch of honey that lingers on the finish, along with baking spices. White pepper on the retrohale. The burn line continues to be uneven. There’s a dark, fruity note hiding in the background. Fig maybe? It’s not enough to brighten up the flavor profile, but it’s there. Salt and campfire come to the front. Baking spices and cedar on the finish. Salted butter comes and goes. The ash is bit flakey, but only at the end. The rest of the ash is compact. The Macaw finally seems to be coming together…at the end of the second third.  Chocolate, campfire, nuts, and caramel all come together. Salted nuts linger on the finish. The spiciness that was so prevalent in the first half of the cigar now compliments instead of vying for dominance. 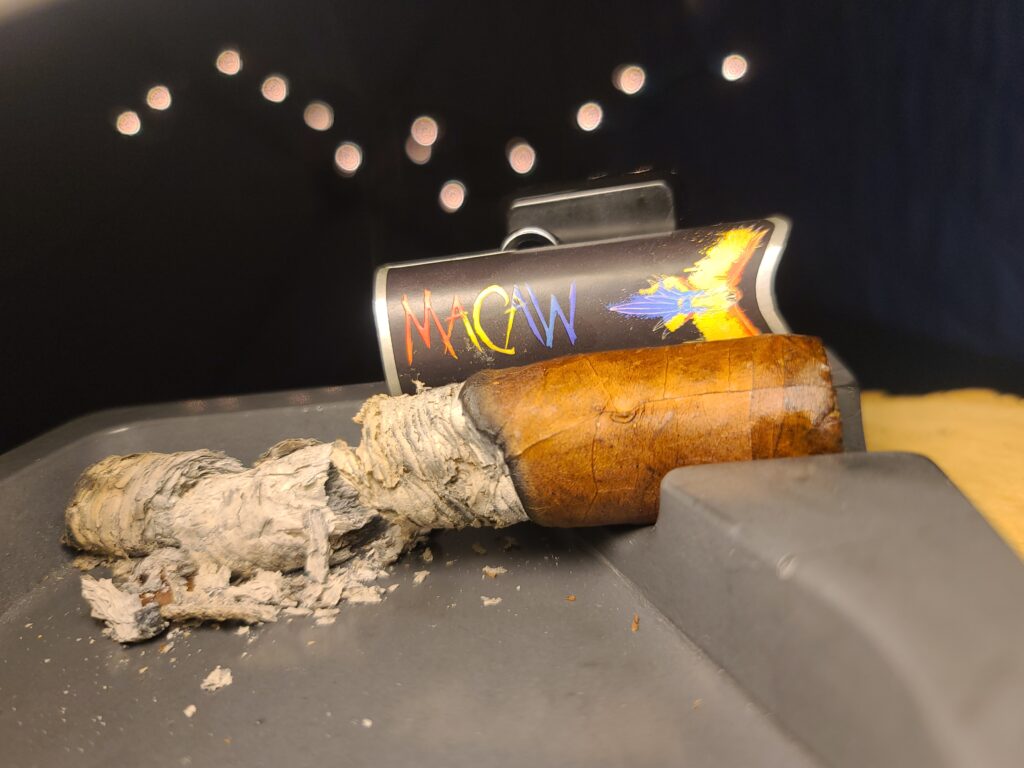 The burn is much more even, but not razor sharp. The final third is much more tame than the first two thirds. Coffee, campfire, and a touch of cedar begin the final third. There’s a citrus note that is brightening the Macaw’s flavor profile. The ash loses its shape as I deposit it into the ashtray. Overall, the ash is much more flakey in this final third than in the previous thirds. There’s a meaty component beginning to come through that is really good. The spiciness is starting to ramp back up as black pepper returns to the retrohale. Charred wood, espresso, and a meaty note. The smoke remains creamy and substantial. Salt, charred cedar, and black pepper finish out the Macaw.

Besides the beginning of each Macaw being very different, they were pretty straightforward flavor-wise. Notes of chocolate, coffee, cedar, and pepper. The first third was the most interesting, with a mushroom-like note weaving through it. Otherwise, the Macaw is pretty standard and pretty boring. The final third seems to come alive but too late, in my opinion, to make any real difference.

I don’t like to disparage cigar but the Macaw fails to deliver a cohesive burn experience. Uneven burns plagued both Macaws, as did a flakey ash. While the construction looked great before the light, it fell apart immediately after lighting and never found its footing. 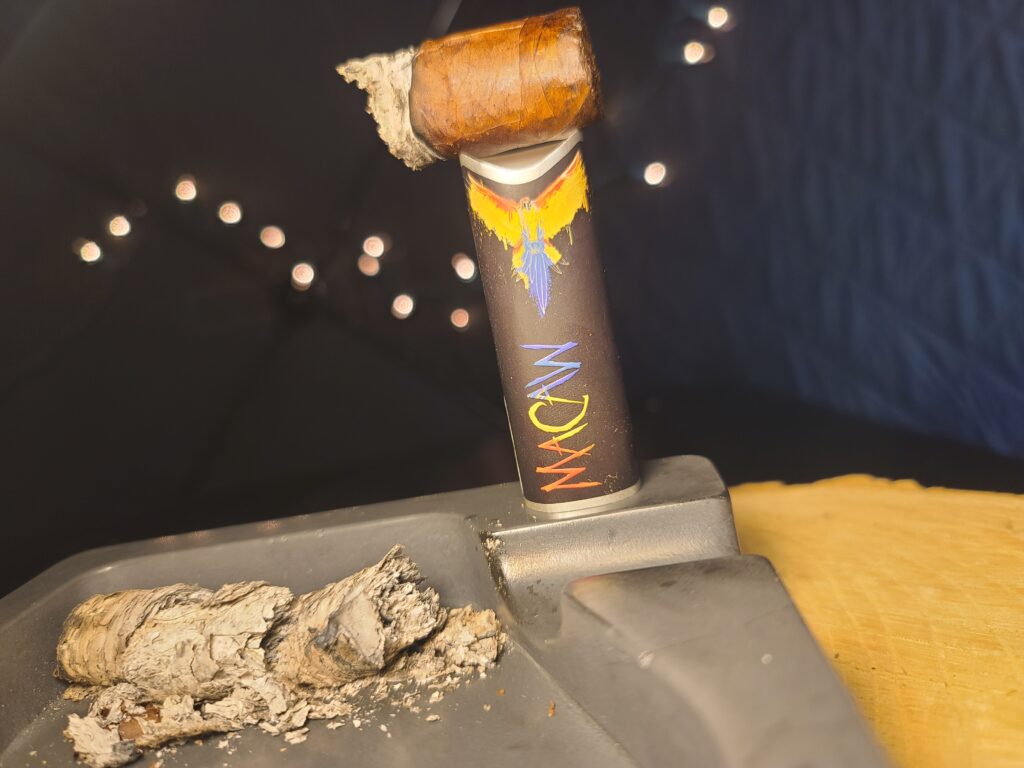 WHEN THE AR EXPERIENCE IS BETTER…

…there’s a problem. The Macaw starts off gimmicky and ends in kind of a hot mess. The uneven burns, refusal to stay lit, and the simple/straightforward flavors make it a huge miss. This cigar just didn’t do it for me on any level. The final third of the Macaw shows some signs of greatness, but the rest of it seems like it was blended haphazardly and put together in the same manner. The rest did the Macaw no favors. I’ll stick with Blackbird Cigar Co.’s core blends.