Rick Rodriguez is a name that most enthusiasts and aficionados have heard of. Rick has had a lot of accomplishments over his 22yrs with General Cigar Co. Learning from such Titans in the industry as E.P. Carillo, Daniel Núñez, and Benji Menendez, Rick took over as “Brand Ambassador” for CAO. There he had a string of great cigars, including the Amazon Basin. Rick retired from CAO and General Cigar Co. earlier in 2022; but he wasn’t done with the industry.

At 62 years young, Rick co-founded West Tampa Tobacco Co. with Gus Martinez; and, as an added bonus, his daughter Sara is part of WTTC and learning the ropes from her dad. Both Rick and Sara sit down with me on the September 15th episode of Simply Stogies Podcast and their enthusiasm for WTTC and the industry at-large is infectious. In June of 2022, WTTC released two blends, the White and the Black. The White features a Ecuadorian Habano wrapper over Nicaraguan binders and fillers.

WHERE:
On the deck 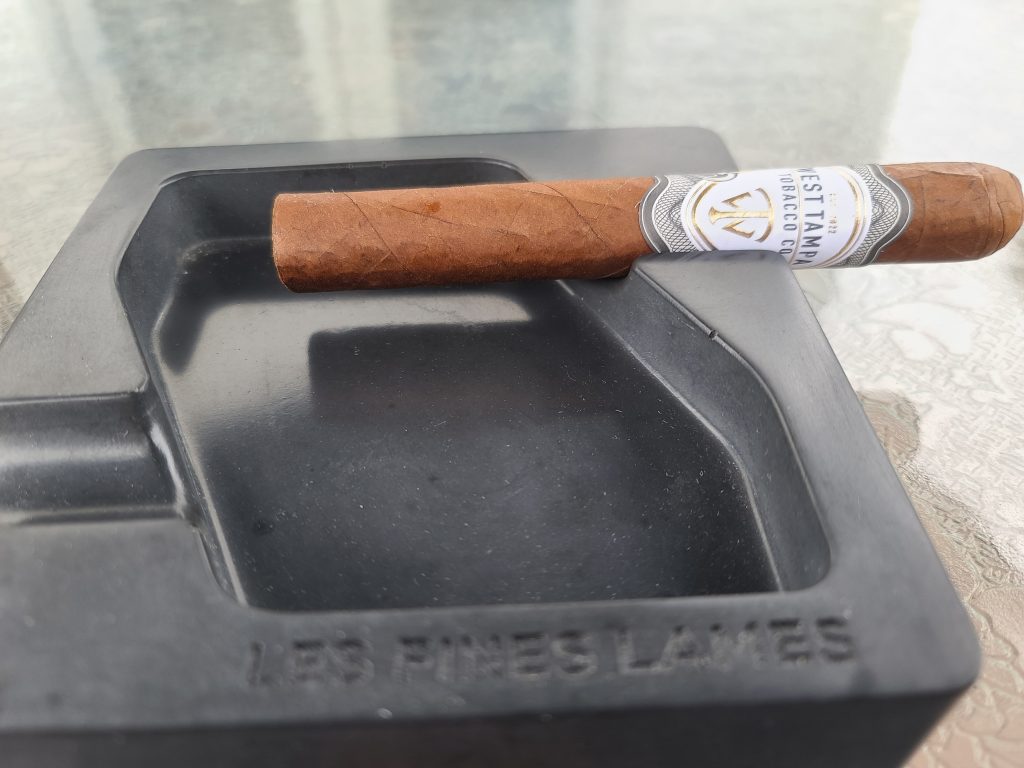 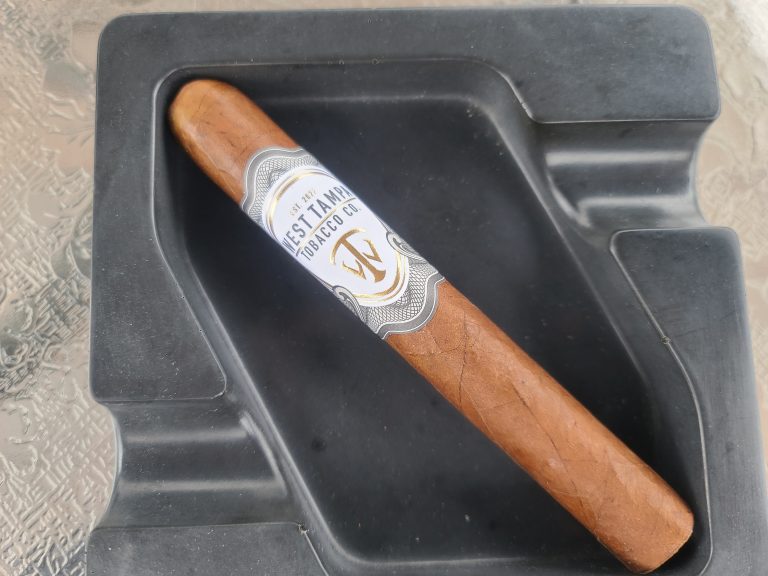 If a band could be sexy, the West Tampa Tobacco Co. White band is white and grey with gold accents. It’s beautiful in color and design. The band is larger than most bands but not so large that it covers up the majority of the cigar, which seems to be a thing for some cigar manufacturers. Instead, it’s an interesting design that catches the eye in a humidor full of cigars. 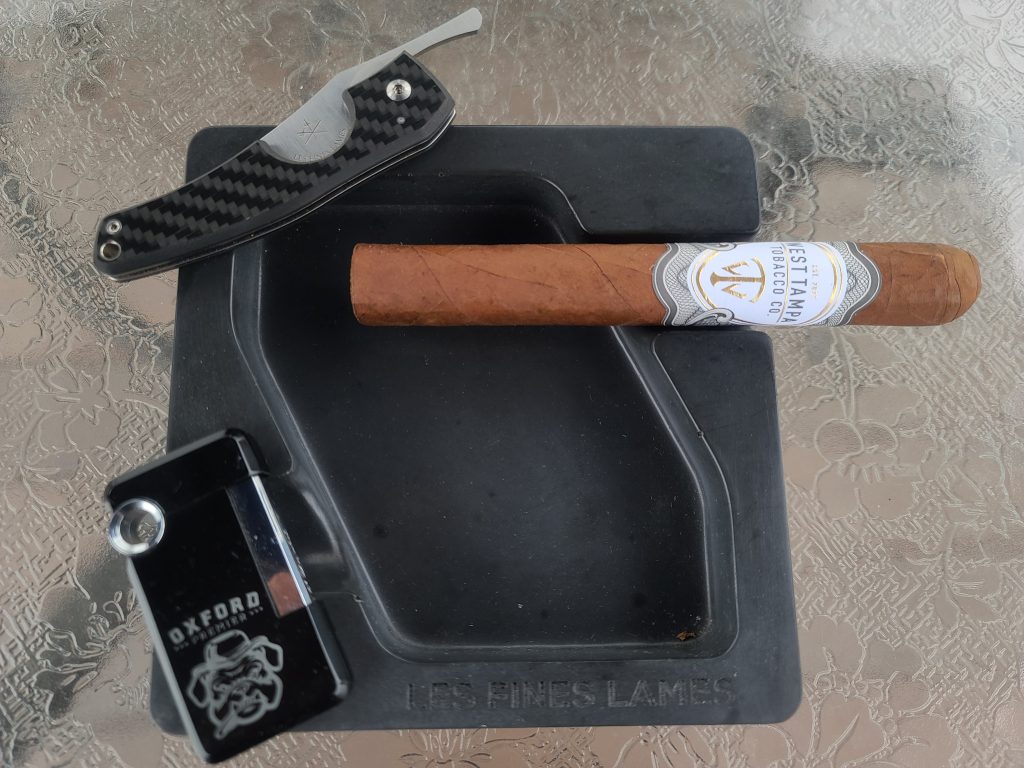 The Ecuadorian Habano wrapper is smooth to the touch, despite the bumps and veins throughout the cigar. There are pockets of oil to be found all along the wrapper, as well as some slight mottling. It’s a gorgeous looking wrapper, that is a beautiful shade of light brown. It looks almost like caramel. 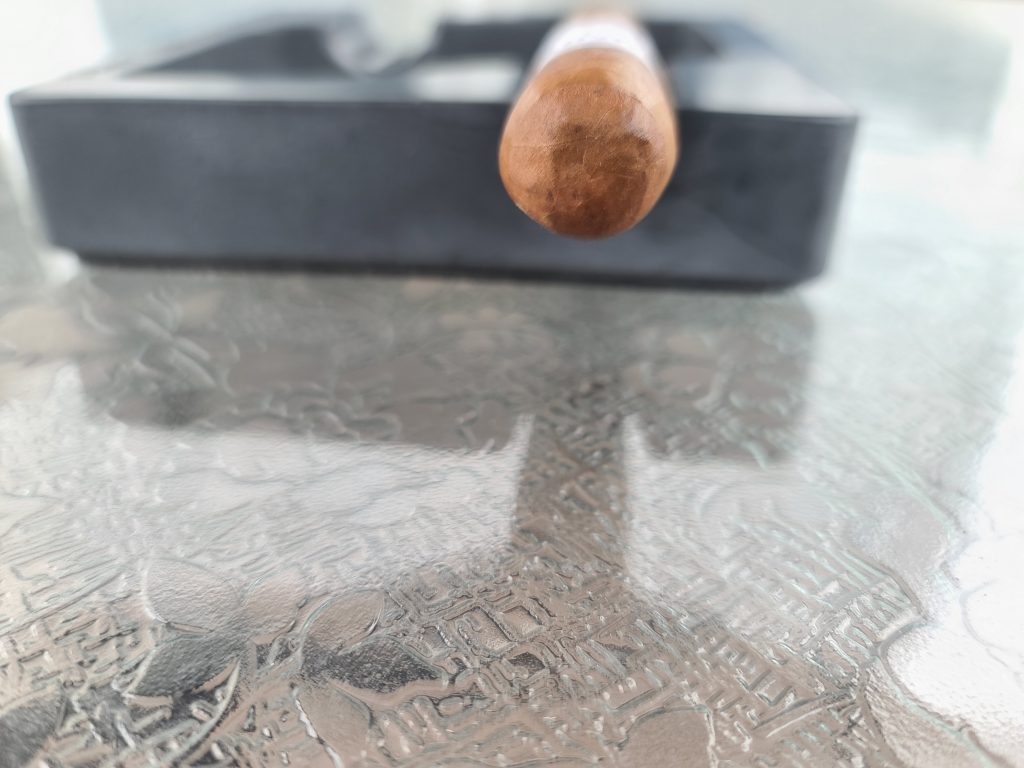 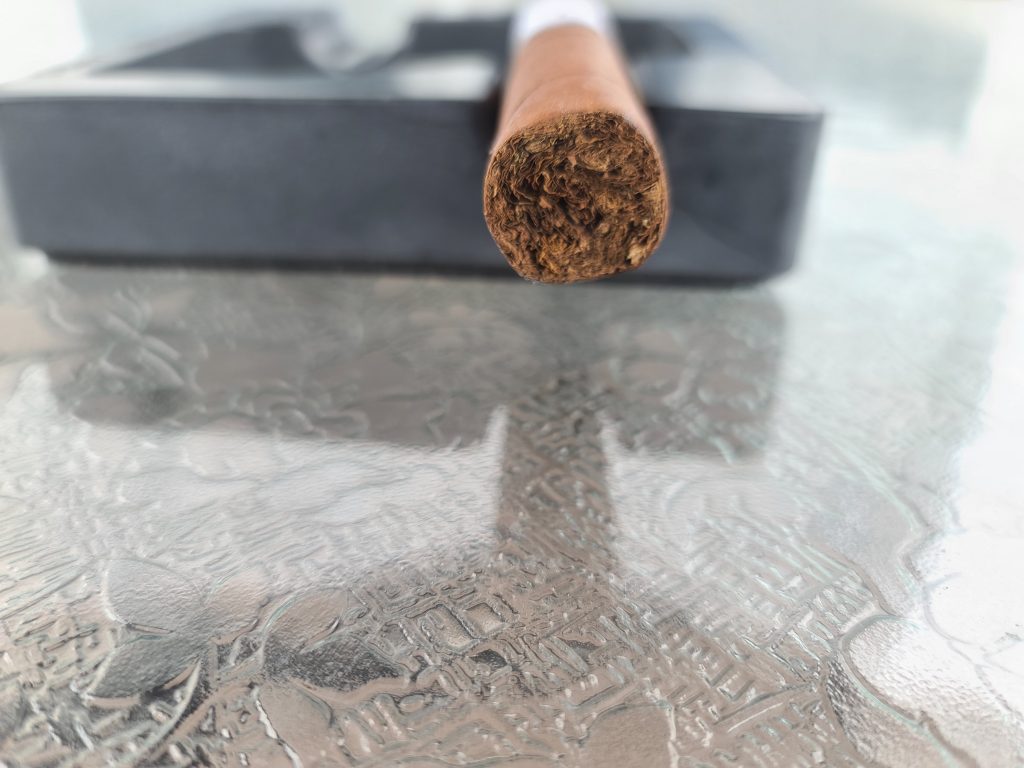 The wrapper gives off a strong scent of barnyard, with hints of cedar and fruit. The foot has an almost floral note to it, but it mainly gives off notes of hay, fruit, and sweet tobacco.

There is a sweetness on the cold draw that reminds me of chalk candy, followed by a herbaceous note, fruit, and hay. The draw is almost perfect. 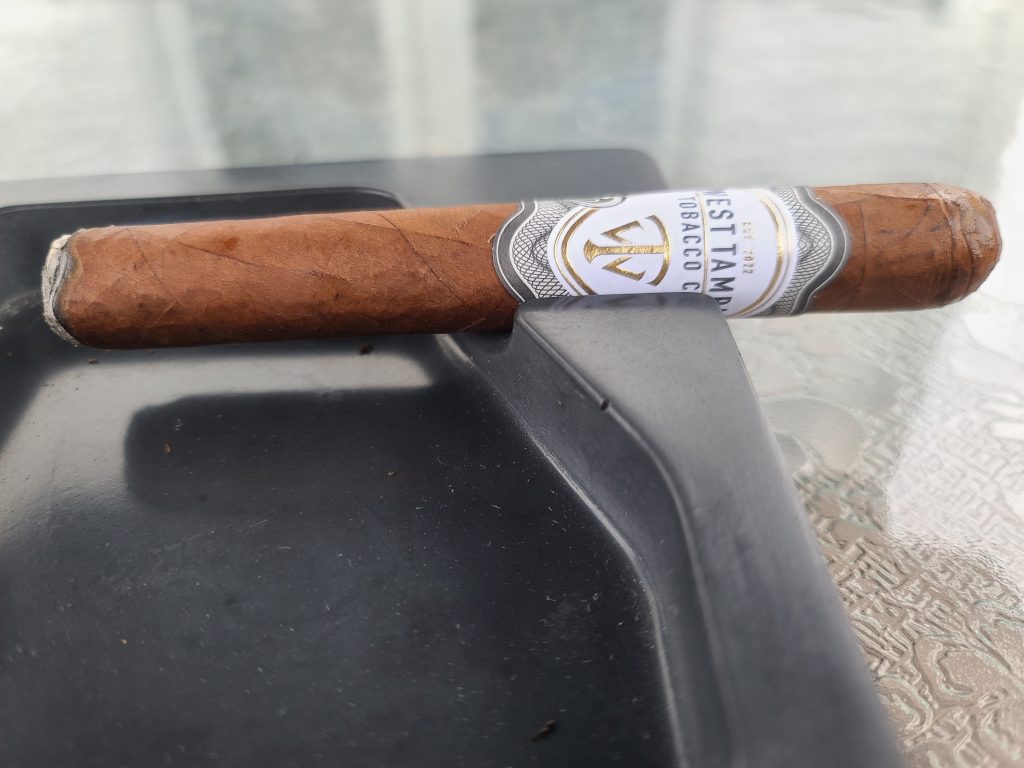 The initial light reveals big notes of earth and coffee. The retrohale is black pepper. There are spicy undertones and a nice sweetness that lingers on my palate. There is a note of yeast or bread that begins to come through, but seems to quickly fade.

The smoke is creamy and thick. While at rest the White toro’s smoke production is steady and unfaltering. 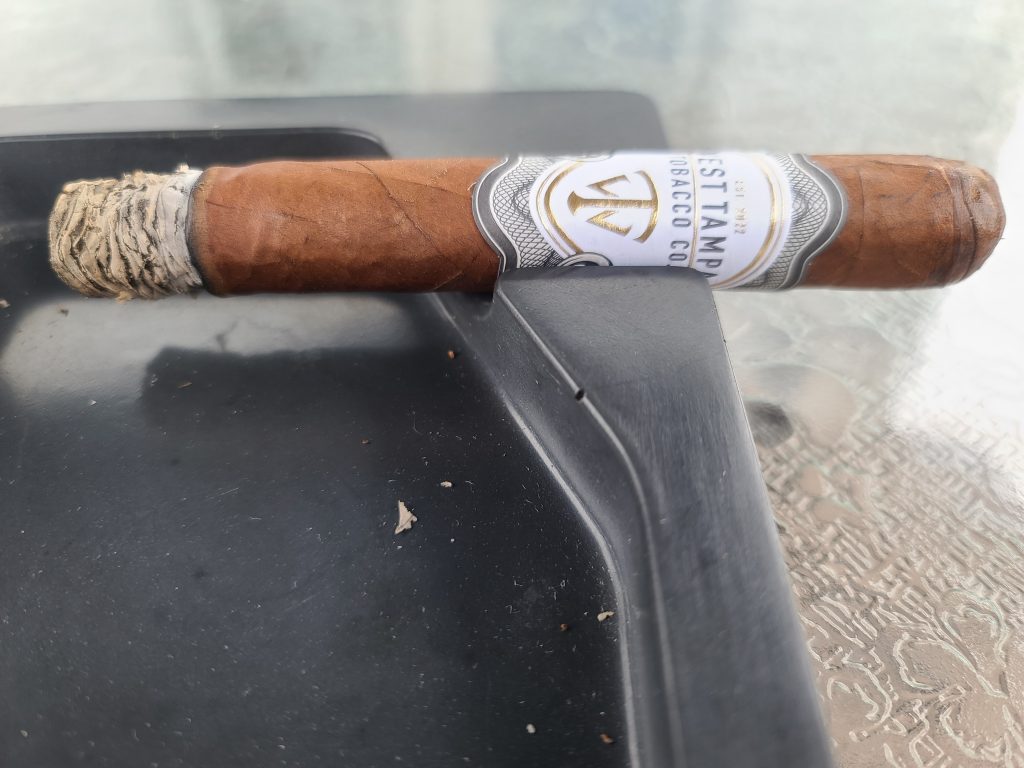 The initial third calms down quite a bit from the initial light. There is a tang of citrus that lingers on the palate. White pepper now on the retrohale. Notes of coffee, earth, and lemon are easily detectable. The West Tampa Tobacco Co. White is a great pairing with coffee. A hint of fruit, almost raisin-esque, joins in; and with it, comes a nice caramel note. The ash is gray and black, and compact with just a few stray flakes. The burn is relatively straight, even in the slight breeze. The citrus is stealing the show in the first third. Salted butter takes over for the caramel. The ash is holding on strong. 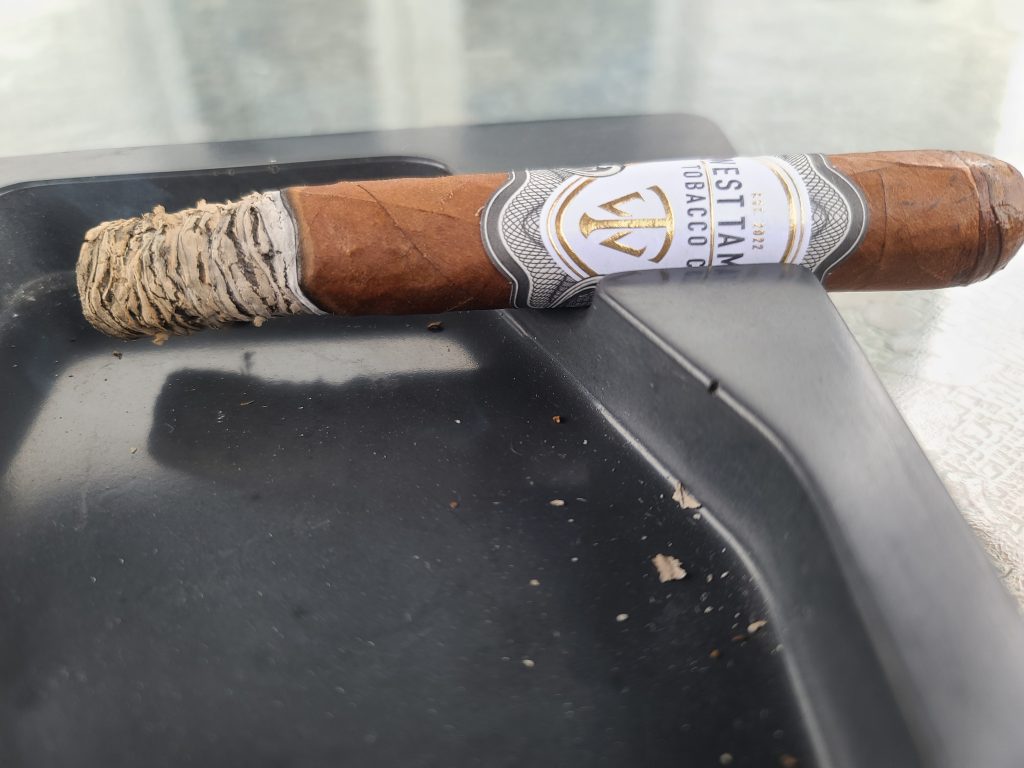 The middle third begins with more coffee and less citrus. The flavors seem more rich than in the first third. Notes of milk chocolate, lightly toasted bread, and maybe just a hint of nuts join the coffee note. Black pepper on the retrohale. There is a herbaceous flavor note that replaced the citrus. This third seems more balanced than the first third. The burn is just slightly uneven, but nothing that is distracting or concerning. The WTTC White is beatifully constructed. The ash is consistent in color and compactness. The smoke is creamy and satisfying. The fruit component from the initial third is still there but lurking in the background. For me, the retrohale is where it’s at: black pepper, spice, and everything nice. Not overwhelming and in balance with the rest of the middle third. Caramel and butter come and go, switching places with each draw. A perfectly medium bodied experience thus far. The ash doesn’t hold on nearly as long as it did in the first third.

The final third begins with notes of leather, espresso, burned toast, a bit of cedar, and a slight herbaceousness. Black pepper and baking spices on the retrohale. The flavors have come to play in this final third of the WTTC White. The citrus from the first third returns but is not quite as prominent. It’s a more balanced experience. Chocolate lingers on my palate. The ash is a bit more flakey now but the burn line is straight, despite the strong breeze. The final third is the culmination of the two that came before it. It puts everything in play and melds it all together into one hell of a final act. The retrohale just sets it all off, and is still the star of the show.

The WTTC White starts a bit slow but ramps up with each third. For me, the middle third steals the show as it shows off the nuance and complexity of the blend. The final third brings it all together, while adding its own voice to the chorus. The question that I have is focused on how the cigar starts. Slow. However, that’s sort of the point with the WTTC White, isn’t it? It’s meant to be a medium bodied experience, creamy, and building on each third…and it does just that.

The burn experience on the WTTC White was actually quite good, despite how the pictures may look. Such are the hazards of choosing to only take pictures on one of the days that I smoked a WTTC White. However, knowing that it was a very breezy day, should give you some idea of how well constructed the WTTC White is. None of the cigars smoked for this review needed touched up or re-lit. 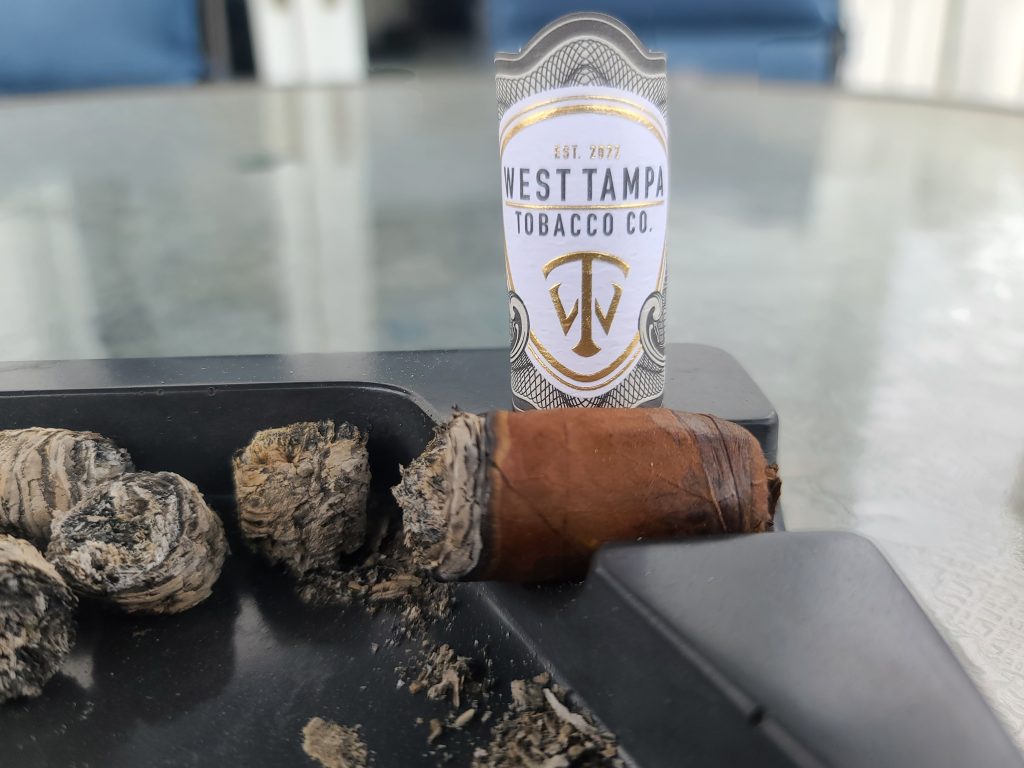 It’s great listening to Rick Rodriguez talk about starting West Tampa Tobacco Co. after being with General and CAO for so long. He compares it a chef going from a large kitchen with access to any ingredient he wants, to suddenly owning his own restaurant and shopping on a budget. Access to ingredients are obviously not the same, especially for a new boutique cigar company. However, Rick has his vast experience and knowledge to draw from…and that ain’t nothin’. Rick uses what he’s learned to his advantage, and it shows in this freshman offering from him. The WTTC White is more than solid and is a great medium bodied smoke first thing in the morning with a cup of coffee or first smoke of the day.