Cohiba is a premium cigar dual-brand – one is produce in Cuba by the Cuban state-owned tobacco company, Habanos S.A., and the other is produced in the Dominican Republic for United States-based General Cigar Company.  The Cuban-produced brand is filled with tobacco that comes from the Vuelta Abajo region of Cuba and as undergone an extra fermentation process.

Cohibas did not become commercially available until 1982, and even then, you could only buy them in Spain. The brand came in three commercial sizes: Lancero, Corona Especial, and Panetela. The larger cigars, like the Siglo VI, did not appear until 1989, after Cohiba was launched world-wide. The new sizes were Robusto, the Churchill-size Epspendido, and the small Exquisito.

Cuba’s most famous brand comes in four series: the core line, Linea Clasica; the Sigle Series; the Maduro line; and Behikes. The last series is considered the very top-tier of the entire Cohiba portfolio. The Behike BHK 52 was named Cigar Aficionado’s Cigar of the Year in 2010.

Just for the record, discount Cohibas do not exist. Demand far outlies supply and the wholesale costs of Cohiba production are just doo high for anyone to offer them at a lower cost. If they are less costly than usual, they’re most likely not real. There’s no point in looking for a bargain because you simply do not know what you are going to get.

Now, to the Siglo VI. Habanos S.A. introduced the Cohiba Siglo VI in the United Kingdom. Dubbed the cañonazo, or “cannon shot,” in Cuban cigar factories, the cigar was a new size for Cuba, just under 6 inches long and an impressive 50 ring gauge. It’s a full-bodied smoke not meant for an inexperienced palate. 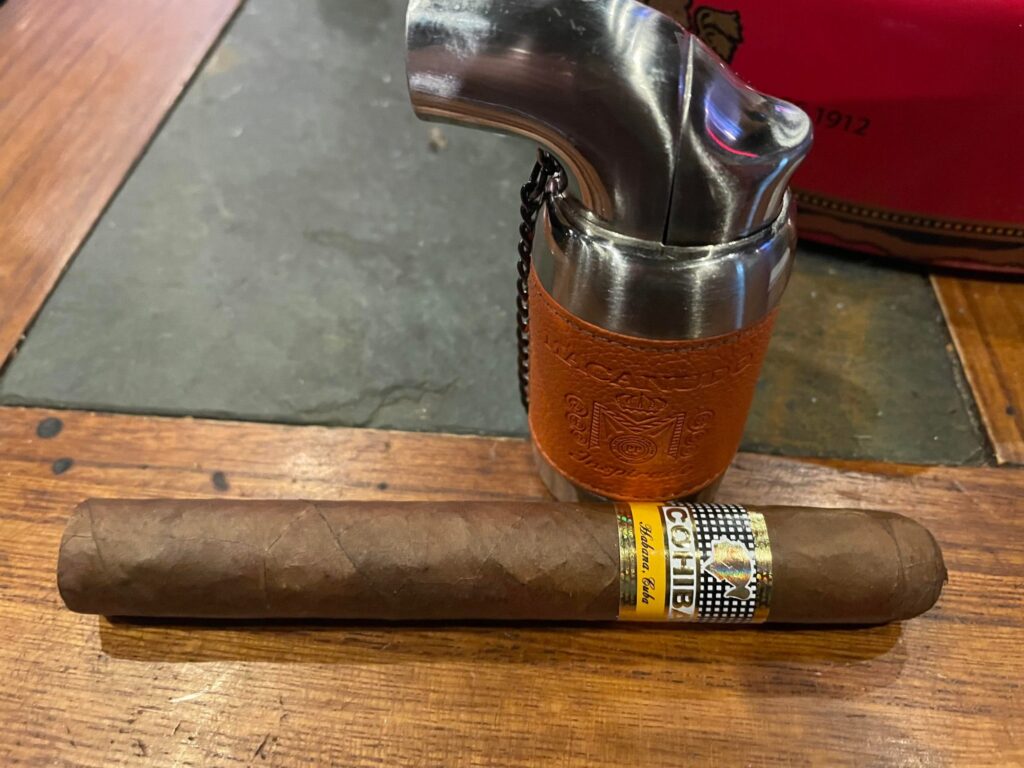 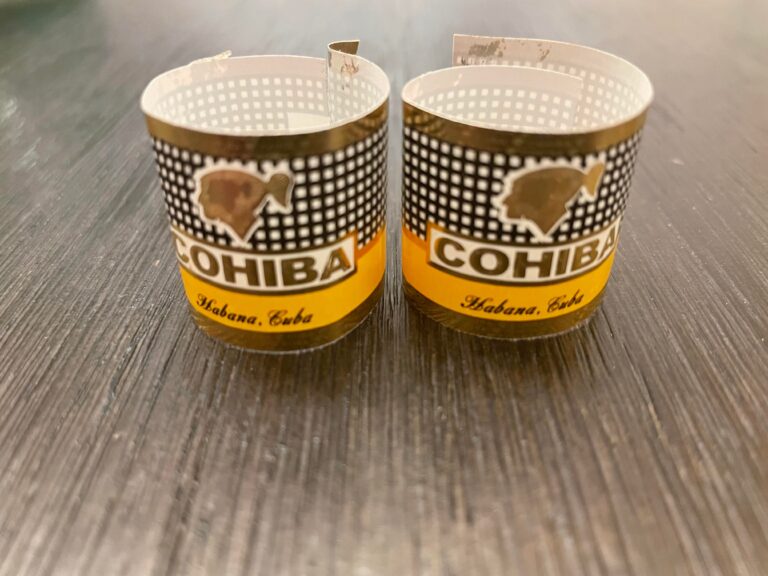 The band is classic Cohiba. Bands of shimmery gold border the single band and the term “COHIBA” is raised shiny gold which is bordered in gold as well. One way to tell a fake is to receive a Sigle VI with the “COHIBA” in flat gold or black. Above the raised lettering is a figurehead with a ponytail that is holographic gold with a smaller holographic figurehead of the same style. The figure is outlined in a thin white line. Another way to tell a fake is if the thin white line surrounding the figure is uneven – thinner in some parts and thicker in others. The line below the chin should not intersect the white squares below them and neither should the point of the neck. Also, the left top corner of the “I” should line up with the square above it.

Around the figurehead is a grid-like pattern of black with white squares. Below the “COHIBA” signature is a scripted “Habana, Cuba” in cursive. The coolest thing, however, about this band and shown in the very last photograph of this article is that on the left side of the band, underneath where the glue is, there is a stock number and a little shape that under a black-light produces a mystery image. 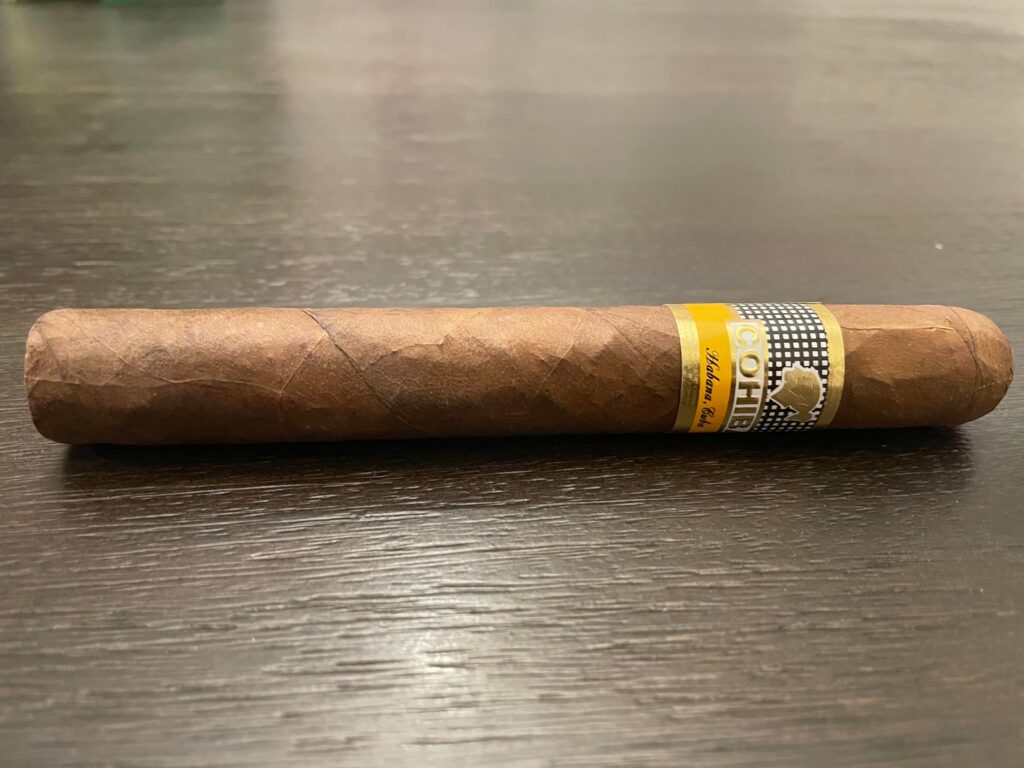 CONSTRUCTION
The cap is a uniquely style triple-cut head, meaning its’s flat with roughly three visible seams. While there are visible veins throughout the body, there is little feel of the vein and the cigar is smooth to the touch. The Siglo VI’s wrapper feels delicate, but not flimsy with a slight squish due to being properly humidified. The color is a medium-chocolate brown, or “milk chocolate” rather than a darker brown maduro color. There is a slightly oily sheen and satin-like feel when grazing the wrapper. The wrapper itself appears thin and delicate, but the cigar itself feels well-packed and even from foot to cap – which is ideal. As expected, this is a well-crafted stick. 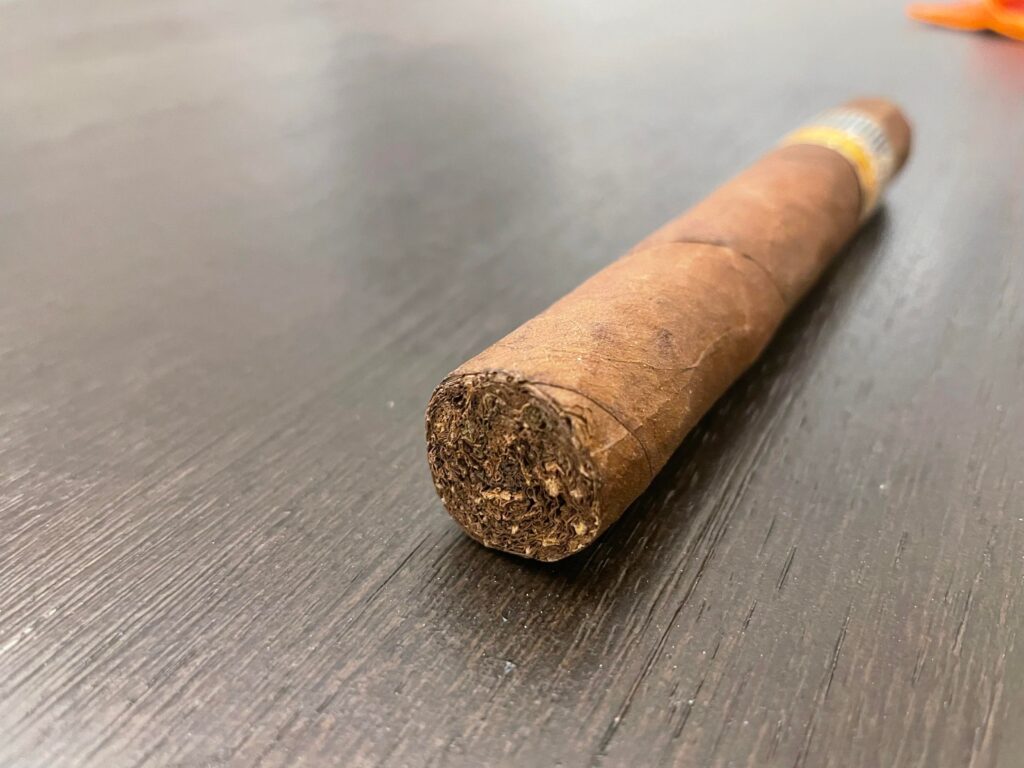 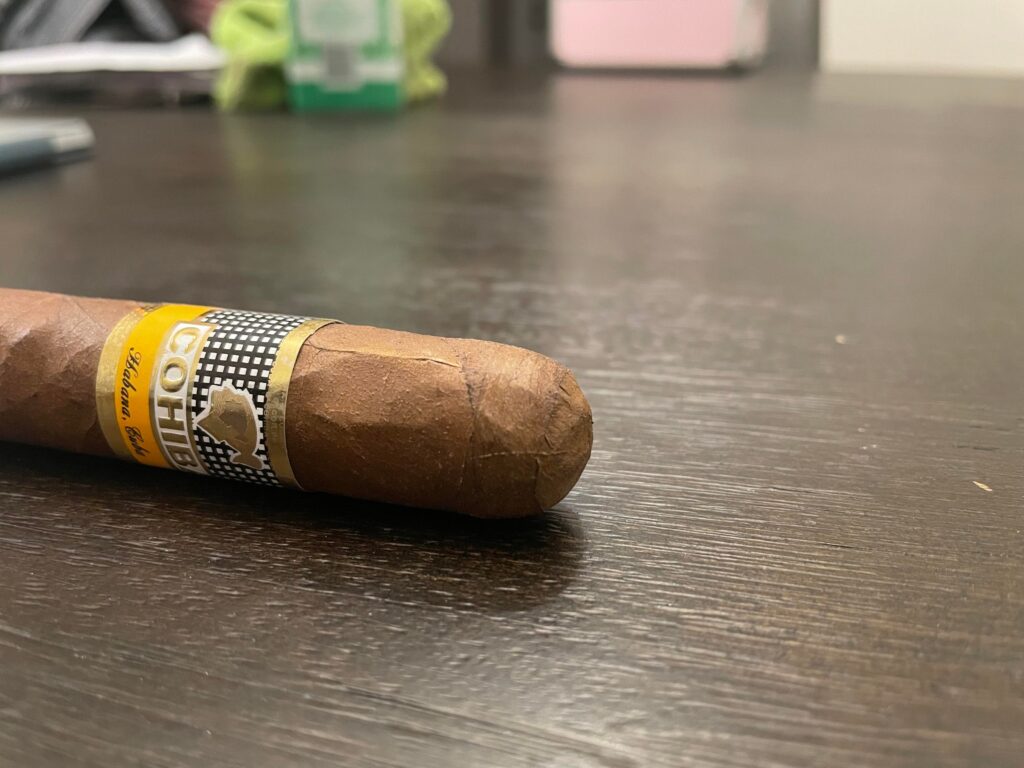 AROMA
From the foot, the first aroma that hits my nose is creamy coffee. Like a Starbucks coffee, not a Death Wish coffee. It it enjoyable and not too sweet.

COLD DRAW
Upon the cold draw, the experience is still that of coffee notes but also with woody leather and earth. 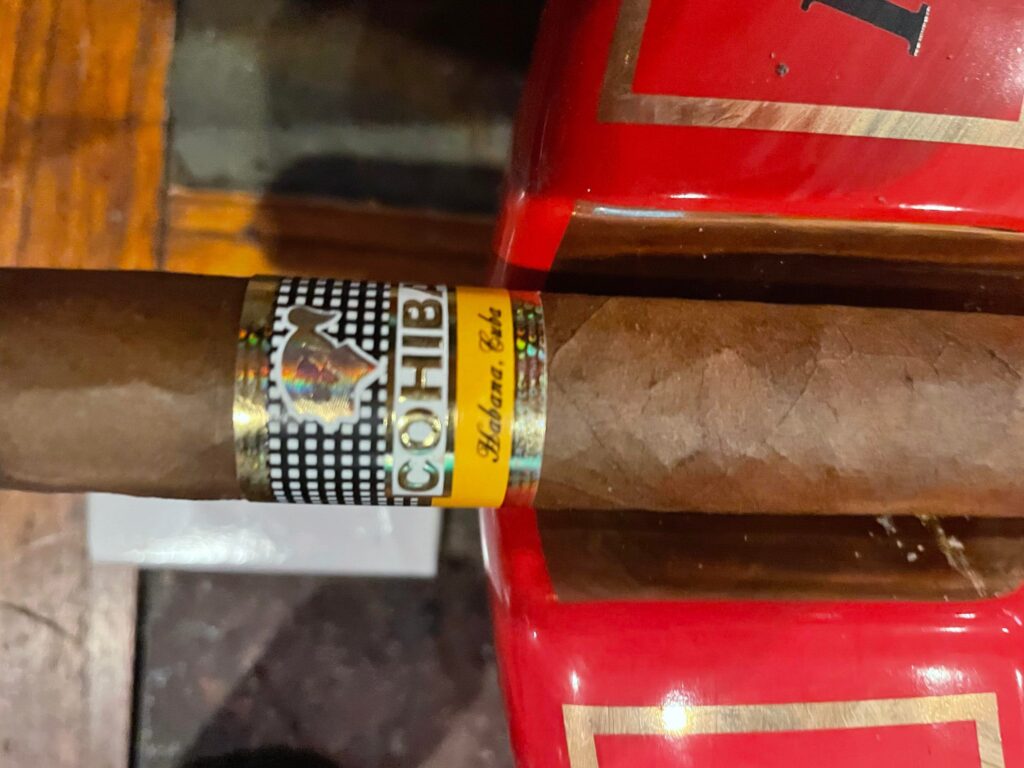 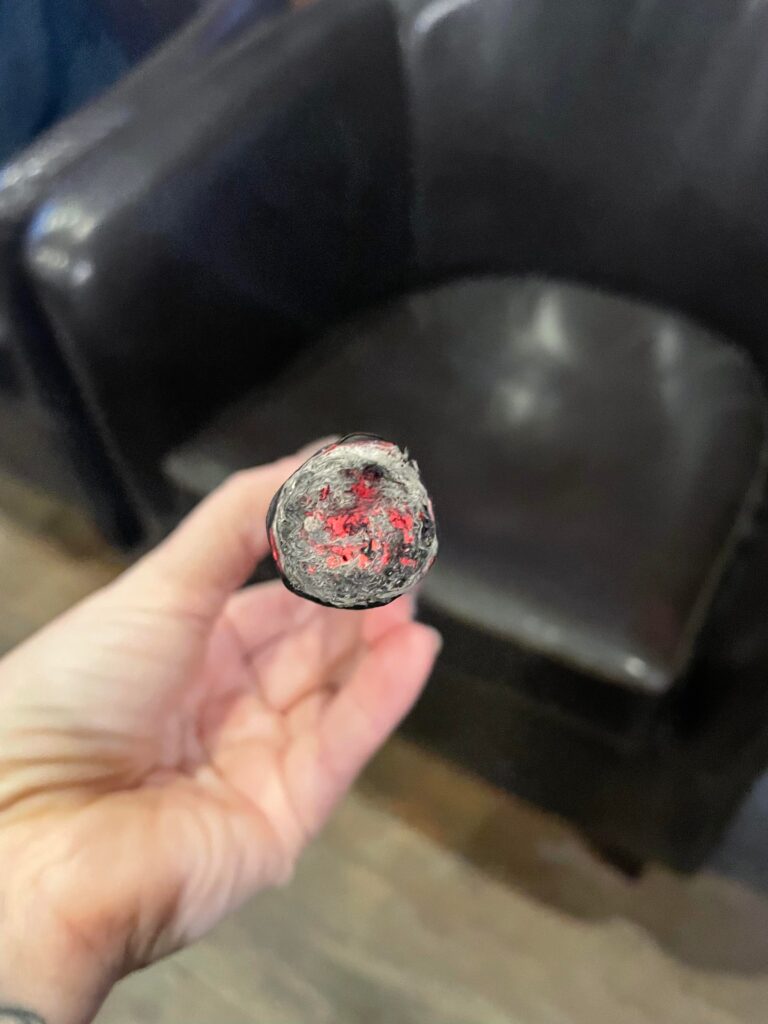 LIGHT & DRAW
Cut:  Lotus V-cut
Fire:  Xikar table torch
Lighting the foot of this thicc-boy takes some time but it was well worth the wait. As you can see, the burn is even all around the ring gauge and a thick insulating ash quickly came to be. The aroma changed from coffee to wood pretty quickly and I was taken to the forest.

SMOKE
The Siglo VI is not a ‘clouds of smoke’ producer. Rather, there was a subtle trail of smoke emanating from the end. I didn’t mind this as there was little smoke to fill the room and little that could eventually make my eyes water or get into my clothing and hair (that sucks!)  Again, the smoky aroma was that of wood and campfire. Should we sing Kumbaya? 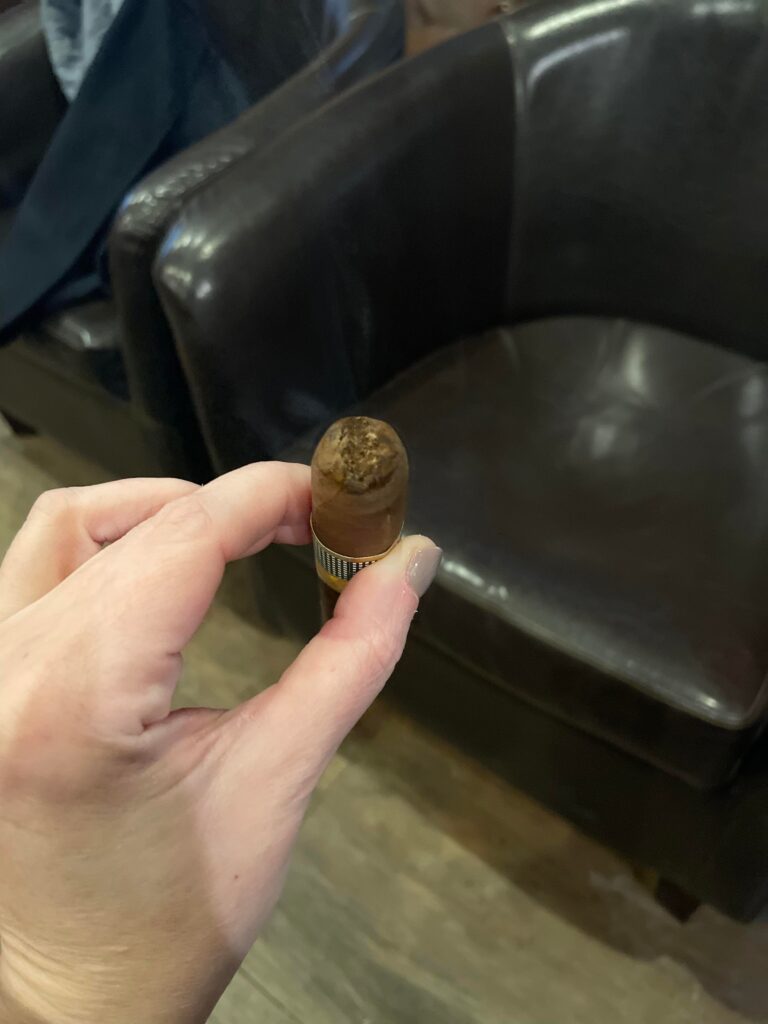 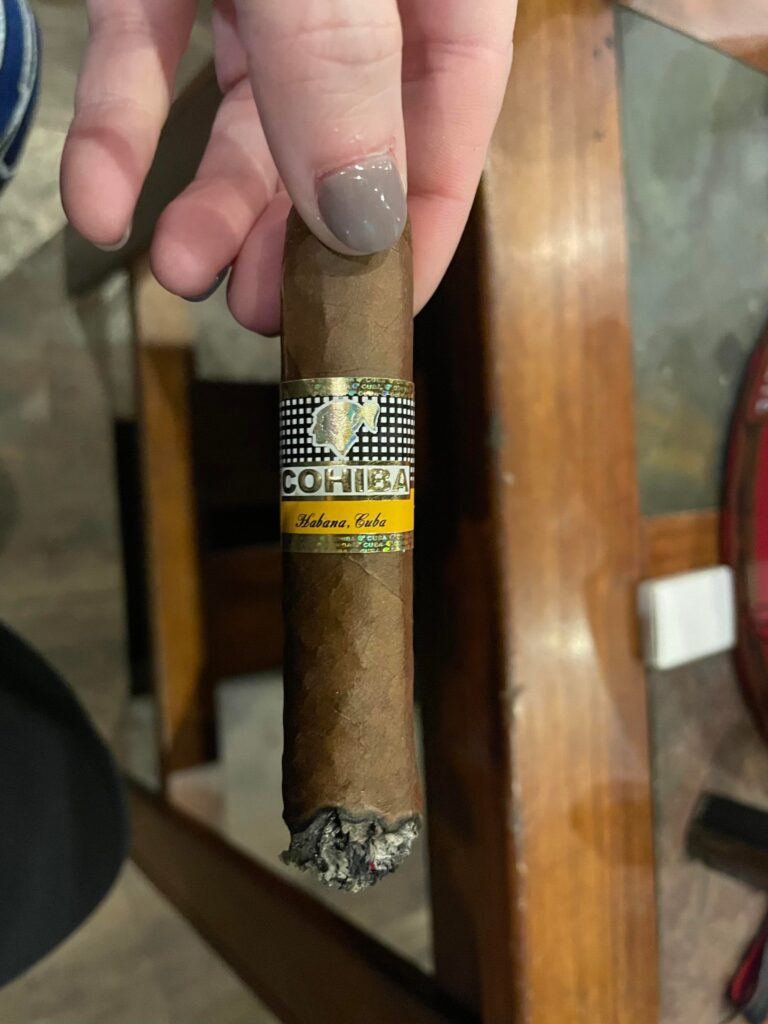 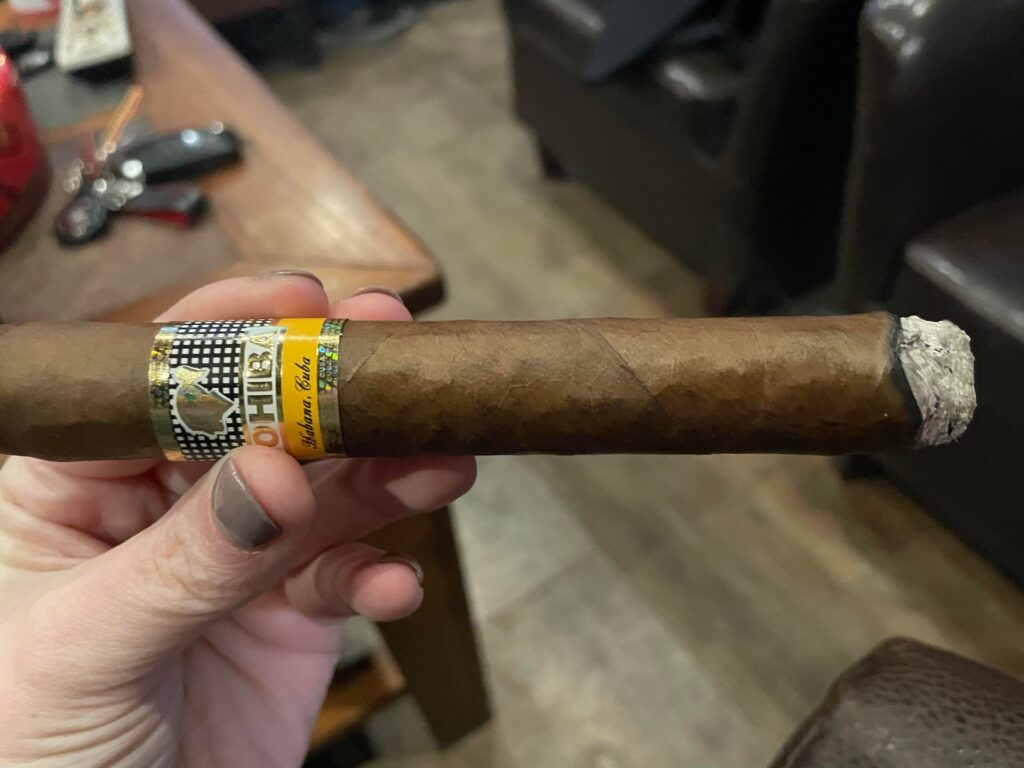 This is the C-trifecta. Coffee, Cream, and Cedar for the flavor profile. As with most Cohibas I have tried, I’m a little bored. The flavor isn’t abundant and the smoke and aroma are minimal. However, I was willing to keep going. The draw in the first third was tough. The light spices from the cold draw turned more so into notes of light pepper. These blend seamlessly with the notes of coffee and earth and woodsy cedar. The first third of the Siglo VI ends with notes of cream and a mild sweetness that is smooth and pleasurable even if not exciting. 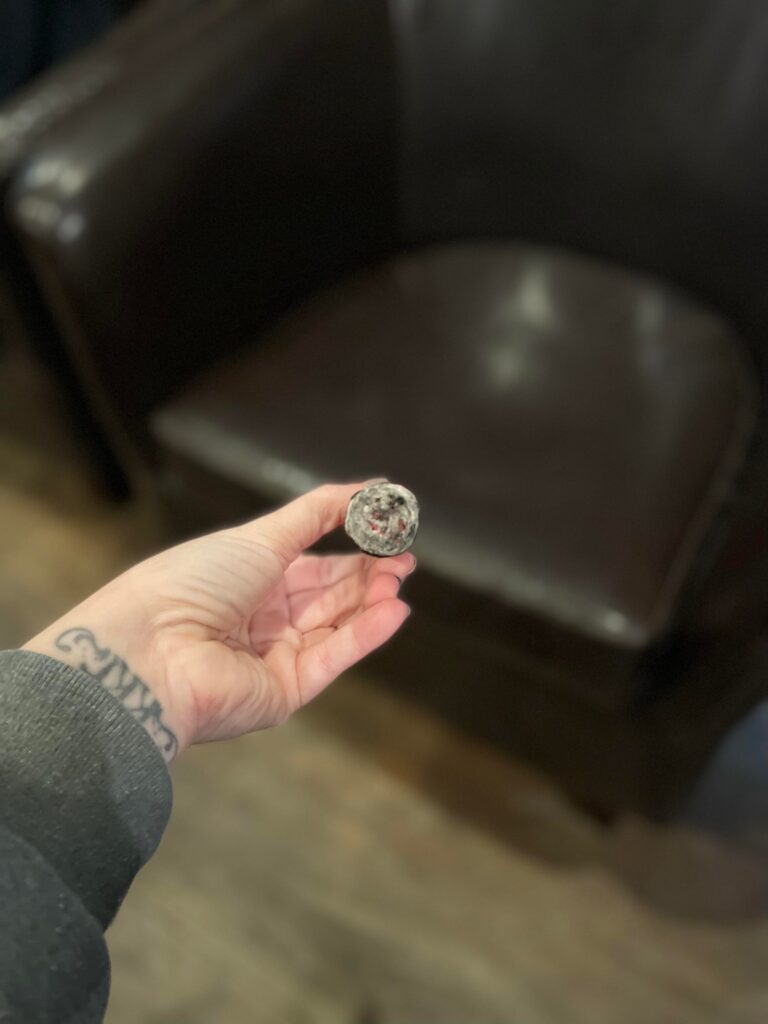 Moving into the second third is awesome. The flavors mature into a strong woody taste that is pleasing to  palette. The smoke is smooth and slightly slick, but does not come out in a billowy cloud. The aroma is woodsy and has a slight cereal tinge to it. The Siglo VI progresses from a disappointing first third into a more exciting second third with a more pronounced flavor profile than in the first third. The beginning of the smoking experience, I was convinced this was a medium to full bodied cigar, but by the second third, I knew it was a full bodied cigar meant more for the experienced smoker.

The draw continues perfectly from the first to the second third once it gets going and the burn is very even-handed. The burn line is even and straight and I can see the fire within the thick ash on intake. The Siglo VI starts the second third out pretty much where the first third ended except for an enhancement of the flavors I was getting in the first third. The wood notes are still there, along with a sense of creamy sweetness. Light spices and hints of pepper came into play, but they never overwhelmed the rest of the notes. In the background now are the earthy notes, coffee, and leather. There was a nice natural tobacco taste in my mouth.

I was taken back to one of my all-time favorite experiences. Since this is a foreign cigar, I thought of my travels abroad while living in France for a few years. One trek that I took was to Prague, Czech Republic. If you haven’t been there, I highly recommend the trip! I was fortunate and adventurous enough to enlist myself in a historical tour from new town to old town. Prague is very clearly divided by one half of the city being modern with clubs, bars, stores, and all thing large city. Cross the bridge, however, and you are taken back into medieval times. The tour guide just happened to be a student studying history and he could provide us not only with facts about the area, but anecdotes as well. As we traveled through the old town and even took some back doors through backways around the city, we ended our adventure at a castle on a hill. While we were standing there in the courtyard, just at dusk, he offered to sing us the national anthem. Oh my goodness, he had a beautiful tenor voice that was accentuated by the somber tune in this magnificent setting just as the sun went to sleep. I am so thankful for that experience.

Just like Prague, Cohiba has a rich history of prosperity and strife of Cuban ancestry. 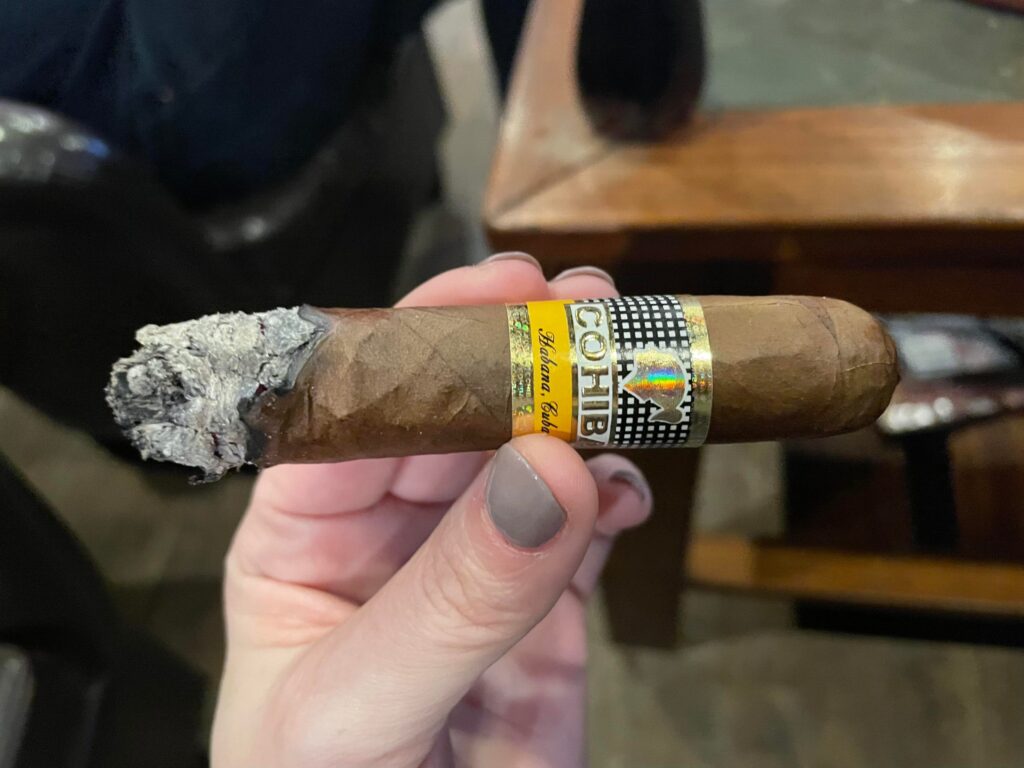 The final third was very similar to the second third and I was happy about that. Again, getting a little bored with the flavor progression. The woodsy cedar notes are the spine of this cigar and has clearly settled in as one of the predominant flavors to finish the smoke out. There was still a creamy, maybe slightly vanilla undertone that is hard to pinpoint, but very enjoyable. An interesting hint of nutmeg has also joined the mix.

While the cigar remains a full bodied smoke, its richness and intensity does not overwhelm the palette and does not sting the back of the throat as some full bodied cigars are want to do. This is still true with the final third. I had three Siglo VI’s and each one finished similarly. The burn becomes a little hot but not too hot. Even with the minimal change in the smoke, the mouthfeel and aroma stay smooth and have that tobacco feel and flavor which is true throughout the smoking experience. The burn and draw remain perfect.

FLAVOR PROGRESSION
While Cohibas are well-known for consistency, there still needs to be some innovation to spark my interest and to consider this a “great” cigar. The flavor progression was just a little too subtle.

BURN EXPERIENCE
The construction and even burn of the Siglo VI was exquisite. The ash remained consistently thick and even ringed around the gauge from first to last puff. While the stick took a little time to light, the rest of the smoke was consistent and enjoyable even without a train of smoky trails. 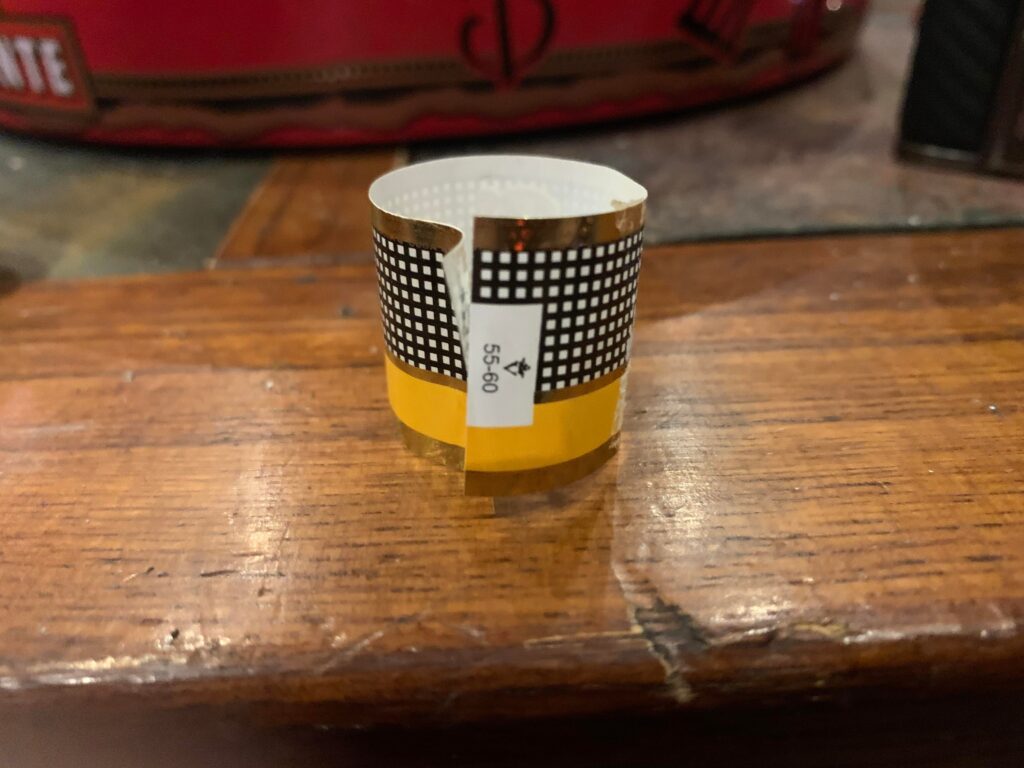 Cohiba Siglo VI Lives Up to Construction and Consistency, but Lacks Innovation.

The construction and feel of this cigar is very, very nice. The smoking experience, while fine and enjoyable, was not mind-blowing as I would expect a stick of this stature to produce. The burn was even, straight, and consistent throughout the session, but I got bored after I started the second third. This cigar either needs more peppery kick or more creamy vanilla to really get the palette going. However, the Siglo VI still lives up to Cohiba’s historic reputation as a good stick even though I found it lackluster for the hype.

The Cohiba Siglo VI has received some of the highest scores in the line from blind reviews, including a 93 from Cigar Aficionado and a 90 from Blind Man’s Puff.