Allow me to introduce myself. My name is Jason, and I’m a cigar addict. It’s not the tobacco I’m addicted to; it’s all the things to do with cigars. It’s the labels, the designs, the boxes, the humidors, the history, the community, the paraphernalia, and the experience. My girlfriend Myranda is not sure what to make of this. But she seems to think I’m a freak for how obsessed I am. It’s her dad that got me into it. So really, she has him to blame, and I have him to thank. 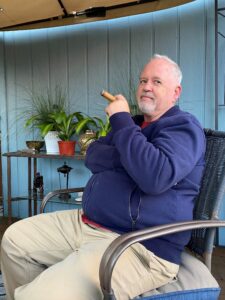 He asked if I’d like to smoke a cigar with him out on the patio after dinner about a year ago. I agreed, and we smoked and drank, and I didn’t get it. It was probably my seventh or eighth cigar in my 43 years. I never understood cigars at any of those times either. But as we sat there and as I smoked too fast, he told me about Drew Estate – how they had turned the cigar industry on their head by introducing infused cigars. I listened to him talk and wondered when we would finish smoking; it felt like it took forever. When we went back inside, I whispered to Myranda, “Jesus, your fucking dad can talk – and cigars are gross. Remind me not to do that again.”

When the holidays came, I thought of buying him a box of Acids. As I looked around online, I wondered what it was that I didn’t understand; there was some really great-looking stuff out there. I called some shops in Portland to see who had a box I could get for him, but no one did. I looked online and started to see how deep the cigar world went. I ended up buying a sample box of Acids for him online.

When I gave him the box, and he opened it up to show me, I was impressed at all the different shapes and colors of each one. I didn’t like the labels or the design on the box, though; they seemed basic and cheesy to me, which put me off.

The next time he invited me to smoke was on his boat. I felt better prepared after watching some YouTube videos on how to smoke a cigar. I found out that I smoked every one of those cigars from over the years too fast, that I had turned them acrid from puffing on them like a cigarette and getting them too hot. I slowed down and took a long draw every minute or so. I counted to make sure I didn’t go too fast. I took my time. I let the smoke linger in my mouth and watched it slowly curl up and out. I loved how thick and opaque it was. I don’t remember what the cigar was, but I enjoyed it, even if it was an Acid which I’ve never had since.

That was it, though, there on the boat, I finally felt what it was they offered. A cigar took time to smoke. If you rushed it, you ruined the experience. It was almost like a form of meditation. I’d smoked other things for years; I knew how to smoke weed, spliffs, and cigarettes, but this was different. This took an hour or so. It was a whole other type of relaxation and presence.

There were more videos to watch, and the more I watched, the more intrigued I was. One night after getting dinner with Myranda in the city, I told her I wanted to check out a local shop called Broadway Cigar Company. I walked in, and some dudes were sitting on leather chairs watching football on TV. It looked and felt like a clubhouse. A skinny older man walked up and introduced himself.

“I’m new to this; I smoked one recently and actually enjoyed it for the first time! I want to see what this is all about, but I have no idea what I’m looking for,” I told him. 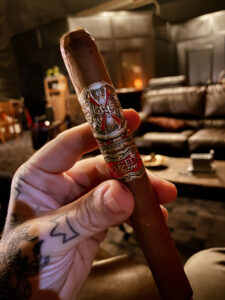 He took me into the walk-in humidor, and I was overwhelmed by all the boxes on the walls. Glimmers of gold and gleams of colored bands caught my eye. I looked around as he showed me some options and explained that I would probably want to start with a Connecticut. There was so much art involved in the boxes and the presentation of the cigars. As a tattooer of over twenty years, I was pulled towards the aesthetics of the branding. They were like magnets.

“It’s a job requirement. That’s what I do for work.” I told him.

“Well, I can help you out with that. It would be my pleasure! And my name is Jason.”

“There’s a lot of people in the industry that have tattoos, guys who have all the labels tattooed on them and shit.”

“I could see why. They’re so good.” I said as I looked around.

He sold me a Perdomo Champagne toro wrapped in golden cellophane and a large ornate golden band that made it look regal. He offered to cut it for me and showed me how to light it. He held the torch up towards the foot of the cigar, and I watched it as it sparkled and started to glow red. “Now take it and puff it,” he told me. He held the flame up as I pulled, and a flash of fire burst out and around. We talked for a while before I left, and I was glad to have met him.

I smoked it in the car on the drive home. The smoke was white and thick. I remembered Tony Soprano driving and smoking, and I felt like a king. Suddenly my 45-minute commute, which I fucking hated, seemed like it wouldn’t be so bad anymore.

I started going to the lounge more often and picking up things to try. I’d spend some time there talking with Dave. He sold me a sampler of Olivas and some Arturo Fuentes. I asked him about the Undercrown shade because I liked the logo, and he told me, “If you smoke that now, it’s going to ruin a lot of other cigars for you.” He would sit and talk with me and tell me about tobacco farms and the stories behind some of the brands I was learning about. Dave and the shop quickly became my favorite thing in Portland, where I hadn’t even lived for a year. After five years of living in Costa Rica, I moved here and was in desperate need of a community.

I thought back to growing up in Connecticut and walking into a cigar shop when I was around 20 years old. I have no idea what I bought. I just picked one and smoked it like a cigarette. I felt like I got kicked in the chest. I thought back to when I was living in Costa Rica, and one of my clients invited my ex-wife and me over to his house for dinner. On his wall, he had a 4×5 foot framed collection of labels laid out in rows on black velvet. The gold bands looked so good against that plush black background. We sat outside his sprawling house and smoked, and it was fine, and I’m sure it was great, but it wasn’t good because I wasn’t ready.

It’s funny how time works, how some things just don’t click until they do.

Now, maybe 8 or 9 months later, I have a crazy collection of cigars, five tupperdores, a desktop humidor, a Pelikan case of boxes, and an Audew electric cooler. I have every band of every cigar I’ve smoked since my first visit to Broadway. I even got around to tattooing Dave with an Opus X logo on his forearm. Common decency dictated that we smoke Angels Shares before going to the shop. That was the first cigar where I noticed how a smoke could transition. I’ve gone off the deep end, but now I know how to swim.

I’m looking forward to sharing my experiences with all of you here. There’s some serious magic in these Simple Stogies. It binds a lot of us together. I’ll be exploring this obsession we all share, the common threads that bind us all into this community of the leaf. 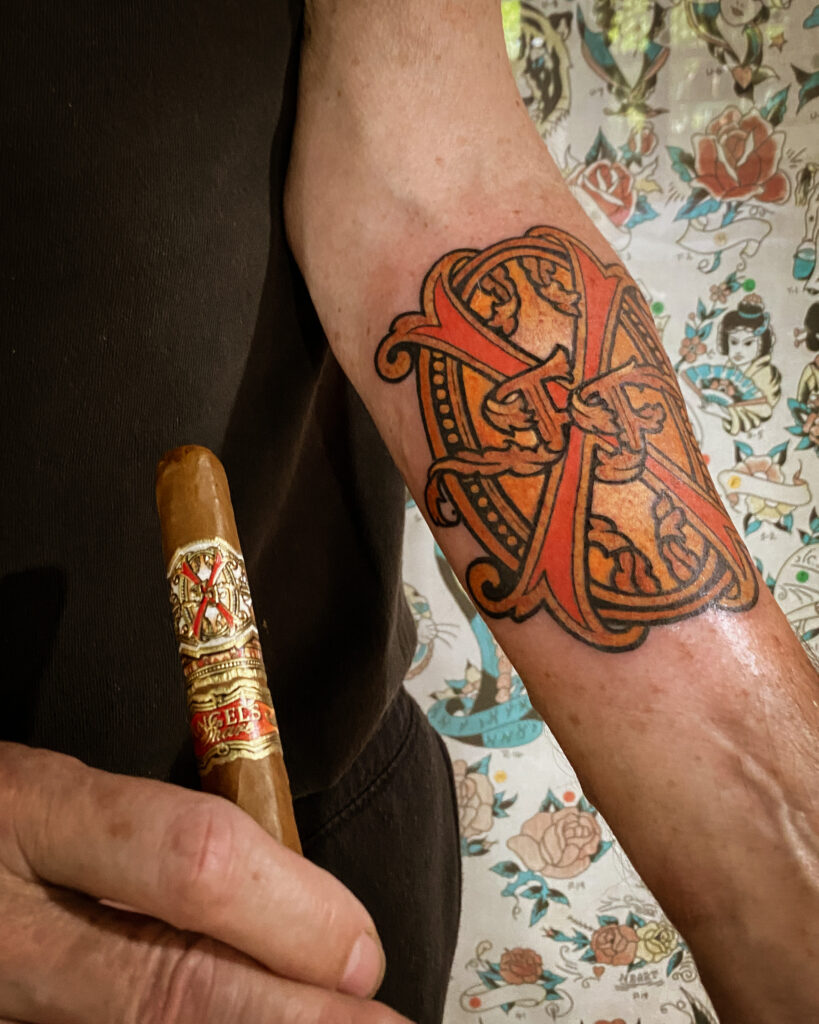