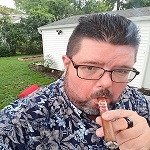 Episode 69: The One and Only Tommy Zman

I chat, via Zoom, with the one and only Tommy Zman. Tommy “Zman” Zarzeki is a writer, producer, voice actor, humorist, and content creator. While he has worked on projects outside of the cigar industry, Tommy is well-known for his work in the cigar industry. Tommy talks about how he broke into the cigar industry and where his journey took him. Tommy recalls his time at JR Cigars and Famous Cigars, among other, and what it was like working with guys like Steve Saka. Tommy also talks about his arrest after leaving Famous Cigars and how the case was dismissed, all charges dropped, and his record expunged. We also touch on how “PC” and cancel culture has an affect on humorists and comedians, the politics of cigar smokers, and much more. You do NOT want to miss this episode.

You can see what Tommy is up to and some of the things he’s worked on in the past by going to his website tommyzman.com.

You can check out his Facebook group Cromag Nation here.