The Trinidad Vigia is a regular production cigar from Habanos S.A. The Vigia is one of the more recent editions to the Trinidad family (originally released in 2014) and arguably one of the most popular as well. Though the Trinidad Vigia is newer in the Trinidad portfolio, the brand has a long history, established post-revolution in 1969. This is a short robusto cigar, perfect for anyone looking to enjoy the nuances of a hand-rolled cigar without burning up too much of their free time.

The cigars reviewed for this article were packed in January 2020 and purchased mid-2020. The cigars were stored in sealed containers at 64-65 RH and kept around 70 degrees for several months before smoking. With these cigars being younger, they were dry boxed for several hours before smoking.

WHEN:
Late afternoon, just as the sun is setting

WEATHER:
95 degrees but starting to cool down. Sun is getting low and the temp is starting to mellow out. No wind to be found and the RH is sitting around 15 percent.

WHAT’S ON:
Reading Dune for the first time

ORIGINALLY RELEASE DATE  The first production year for this vitola was 2015, but they did have a 2014 pre-release.

TOTAL PRODUCTION
Typical Box Size:     The typical box size for the Trinidad Vigia is a varnished semi boite natural box of 12 cigars. It can also be purchased in cardboard boxes of three cigars each in aluminum tubes.
Production Totals:  Unknown

VITOLA BREAKDOWN
o  Petit Robusto  (4.3″ x 54) The Vigia follows in the ever-popular trend of larger ring gauge cigars. the Vigia seems to make and attempt to fill the vitola gap created when Habanos S.A. halted production of the Robusto Extra and the Robusto T in 2012. 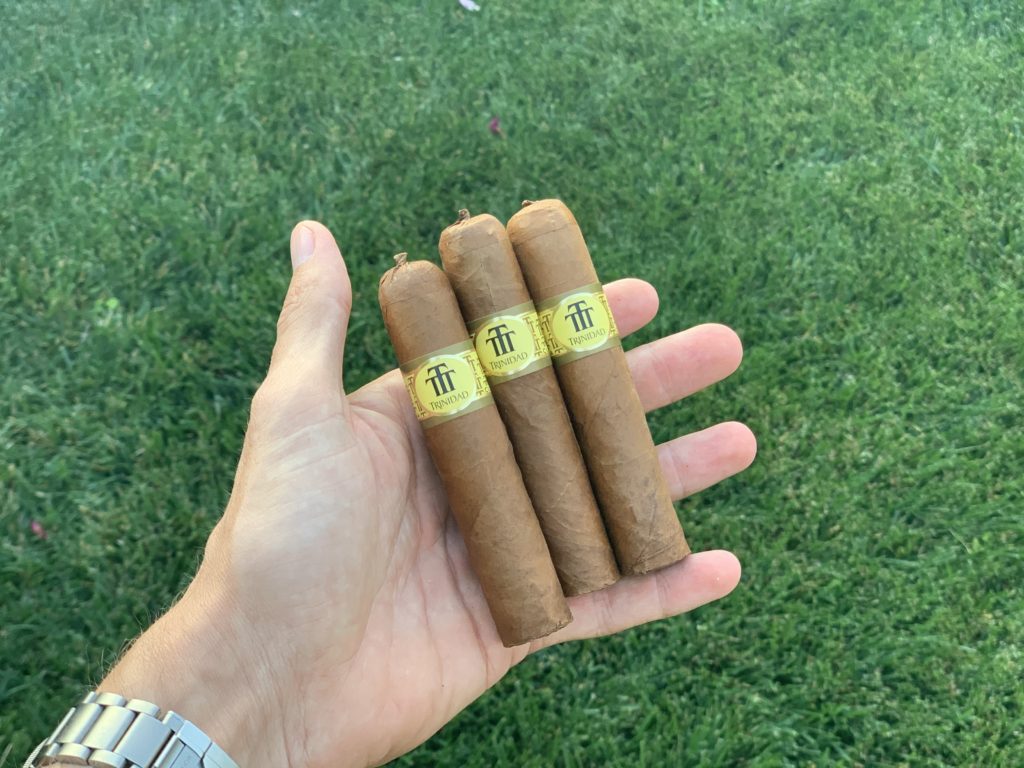 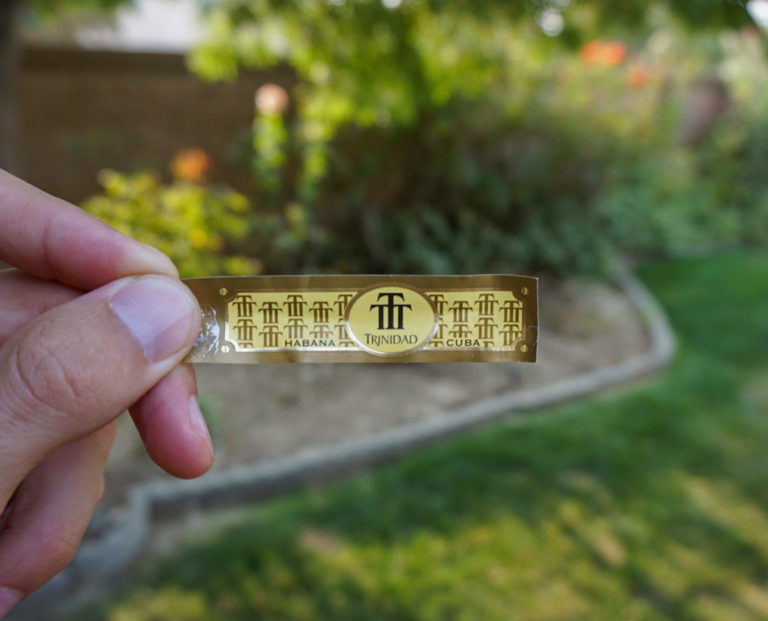 The Vigia features the Standard Band B, the band found on all Trinidad releases after 2003. This is a single band, majority gold in color, and featuring an oval centered on a yellow rectangular background. Inside the rectangle are rows of staggered triple Ts, with the words “Habana” left of the central oval and “Cuba” to the right. The oval has a golden embossed border, the triple T logo, and the brand name “Trinidad.” The brand Trinidad was named after the city of La Santisima Trinidad (The Holy Trinity), with the triple T representing the Father, Son, and Holy Ghost. 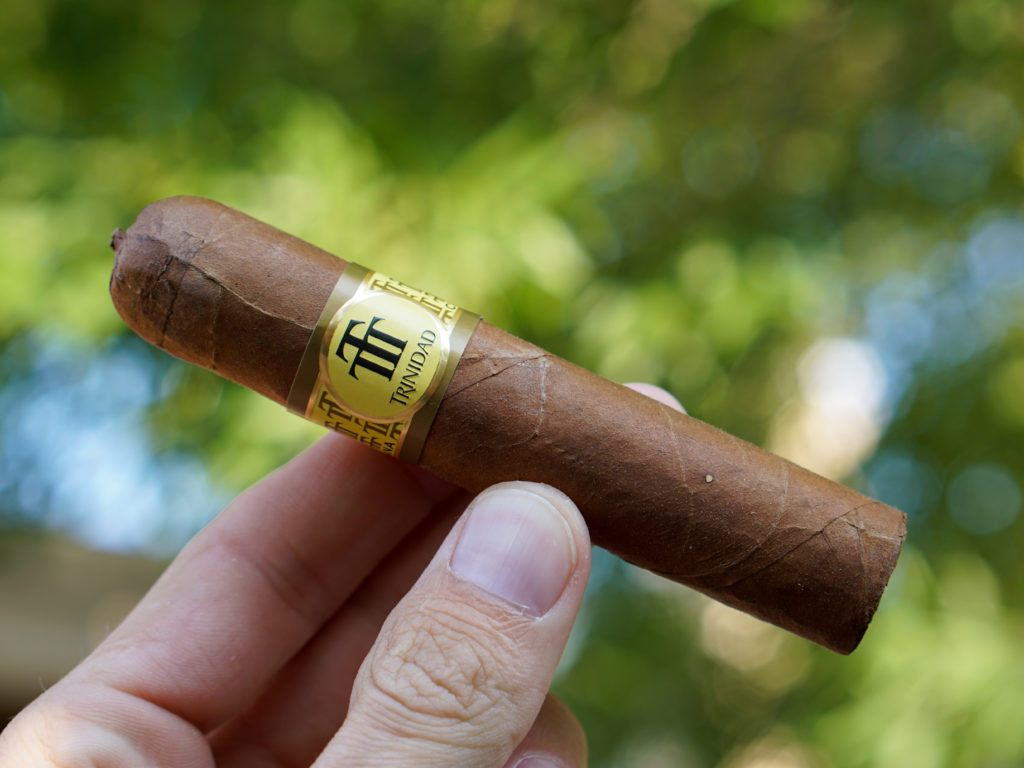 CONSTRUCTION
These usually seem to be well-rolled cigars. The seams on this cigar are smooth and tight, and they blend well with the cigar as they move around. The veins are minimal with one noticeable vein running up the middle half of the wrapper. Like with all(core line) Trinidads, the Vigia features their signature pigtail and double cap end construction. Though I am indifferent to the functionality of the pigtail, I still enjoy the homage to a more traditional rolling style. There are a few water spots on the wrapper of the cigar, but they are small and do not see to hinder any constructional integrity of the cigar. the wrapper is a beautiful matte Colorado Claro with a faint toothiness, only noticeable in the right lighting. 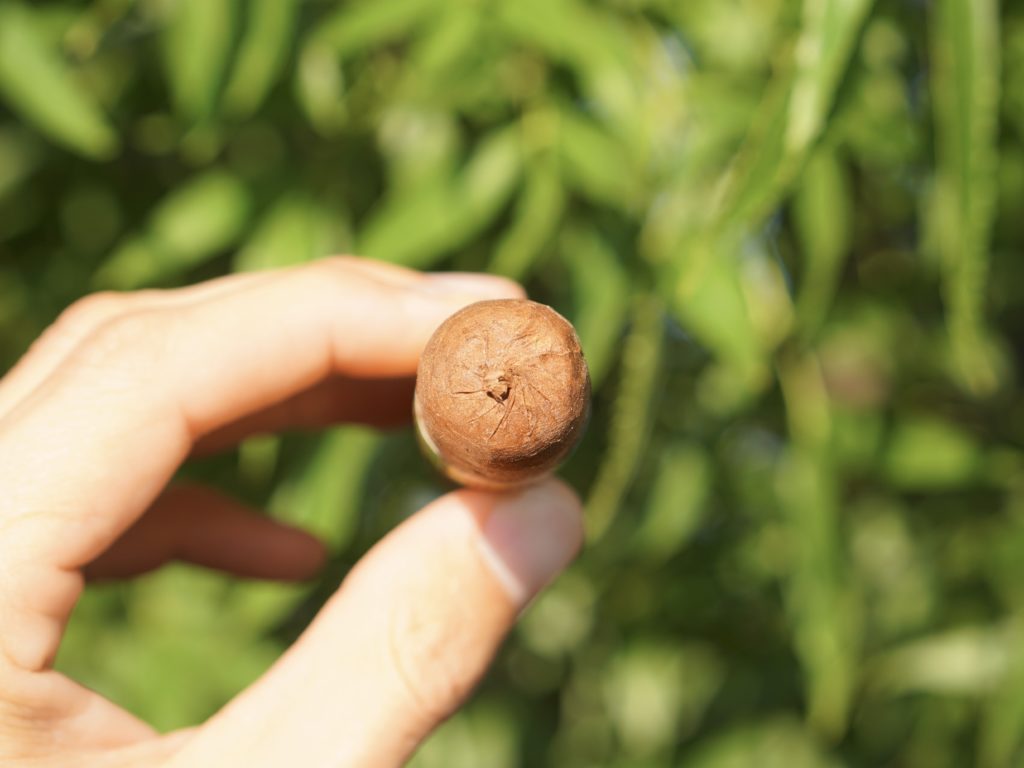 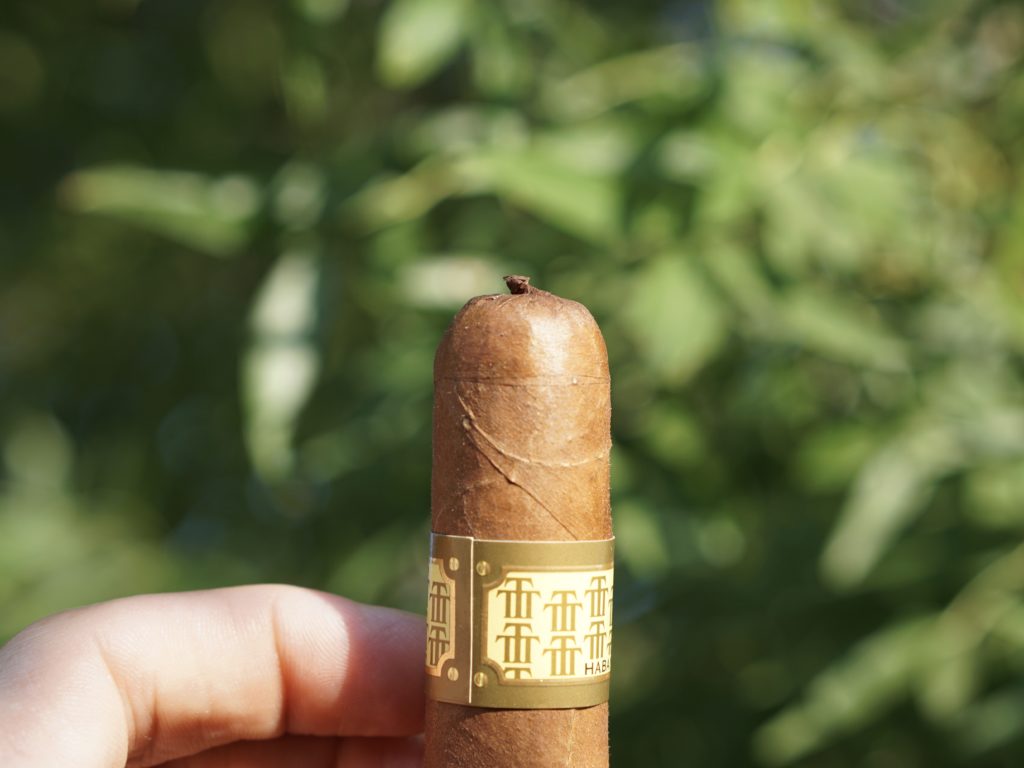 AROMA
The foot is strong with an extraordinarily rich hay, yeasty bread and fermented tobacco scent, while the body seems to be a bit more on the mild side with some hints of earthiness.

COLD DRAW
There are some bread and almond notes present on the first few cold draws, but my palate seemed to acclimate quickly leaving only the bready flavors.

LIGHT & DRAW
Cut:  Punch
Fire:  Butane Colibri Torch
The draw on this Vigia is Goldilocks’; there is a bit of resistance but only enough to keep the proper amount of smoke going. I used a double flame Colibri Slide torch/punch with no ussues on the punch and initial lighting.

SMOKE
The Vigia is a large ring gauge and produces volumes of smoke, but it tends to be a more fine thin smoke. There doesn’t seem to be much density to the smoke nor are there any heavy oils that lingering that might enhance the mouth feel. 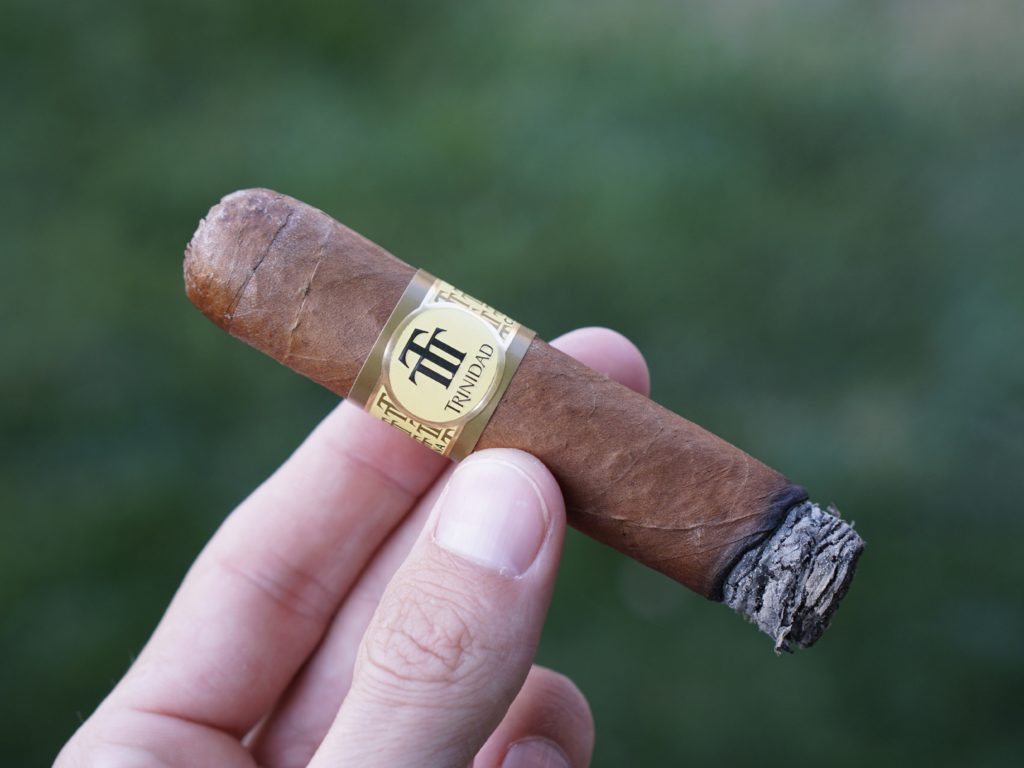 The initial flavors that hit your palate are bitter almonds, new oak and a bit of sulfur. the retrohale seems to have the same minearlly/sulfur-like note but ends with a bread dough notes smoothing out the finish. There is also a bitter and tannic coating on your lips after the initial lighting.

With the initial light out of the way, the Vigia really begins to open and mellow out as you move further into the first third. Roasted almond/cashew and earth are the dominate flavors for the first third. There is a savory quality to the aftertaste, but I can’t quite place what it may be. The smoke is thicker and is developing into a nice creamy white pepper on the retrohale.

The construction of the cigar is average: the burn line slightly askew and the ash quality flakey but holding. 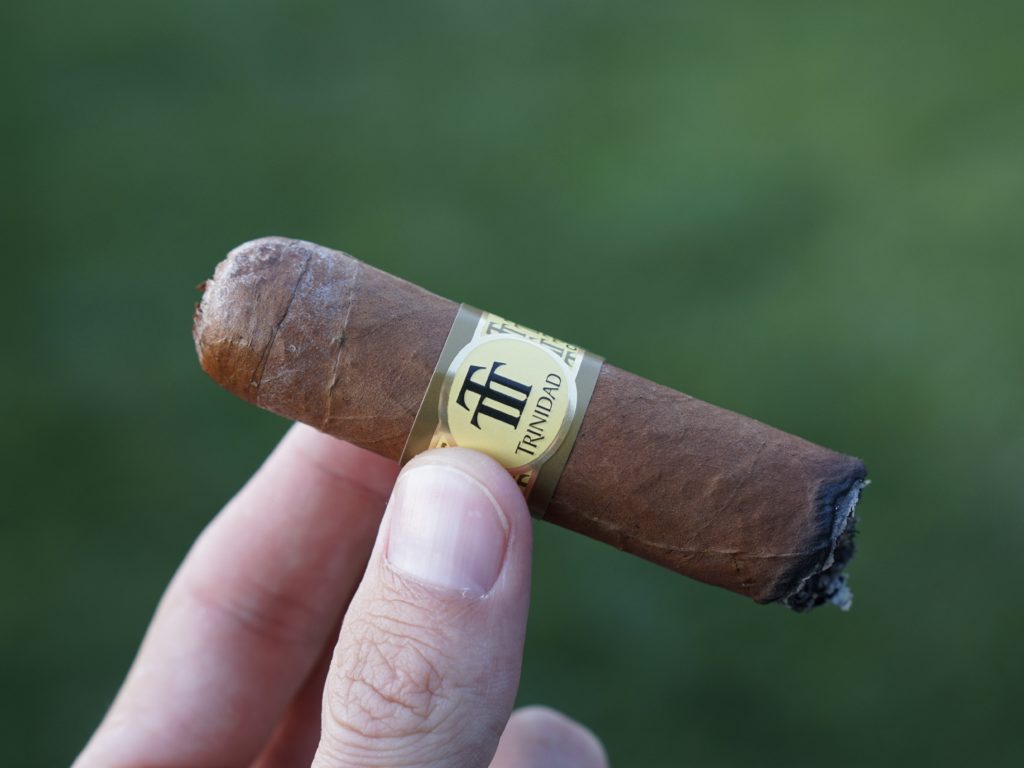 The ash fell, without warning, in a solid chuck almost exactly at the end of the first third.

Moving into the second third, there is a nutty aftertaste(maybe cashew). There was a slightly uneven burn after the ash fell, but it self-corrected after a few puffs.

There are some sourdough and black coffee notes beginning to develop during the second third. The strength has noticeably shifted from a medium to a more full-bodied profile. The aftertaste still have some of that nuttiness from the end of the first third, but they are thrown out of balance by the black coffee bitterness and black pepper. There is also a bit of a black pepper tingle that sticks to the side and back of the palate well after the last puff.

The retrohale remains smooth and creamy with a slight woodiness and pepper finish. 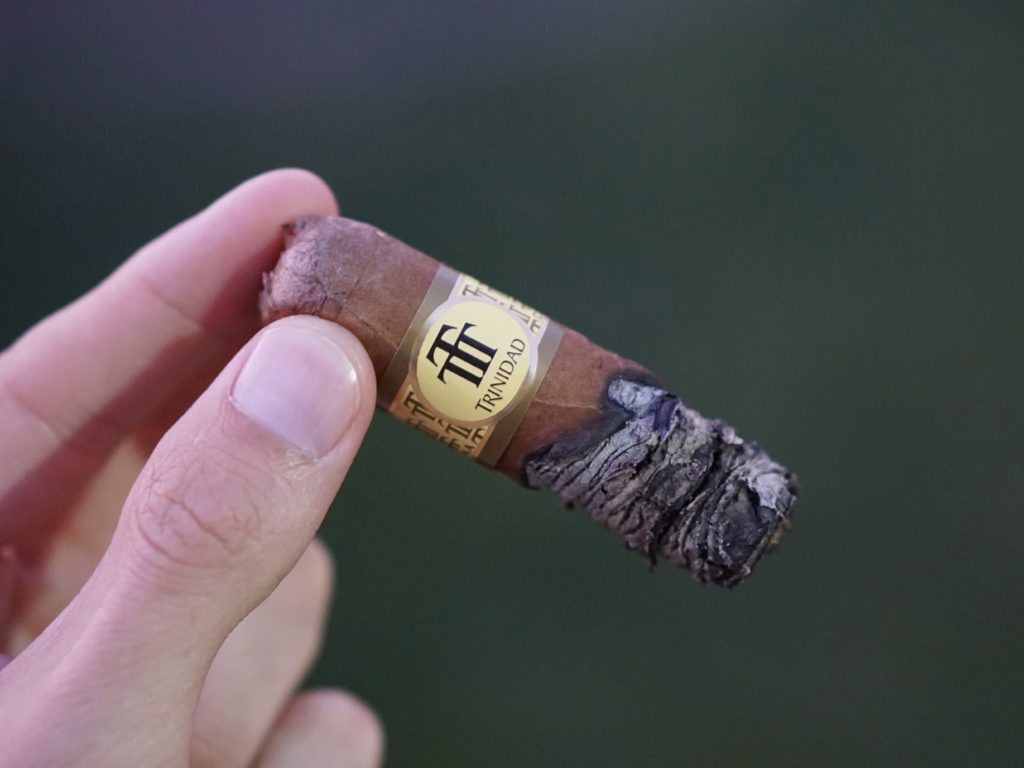 Now in the final third, the ash is holding on well. The flavor transitions have been the more noticeable during this final section; it has also gotten much hotter in the final third. Some of the younger sourdough notes have continued through to the final third and the bitter notes have ramped up quite a bit more. There is a nice coco power note on the aftertaste, but it quickly fades into a mineral/sulfur flavor which has almost be consistent throughout. It helps to remind yourself to slow down and take it easy on the last part; it is very easy to overheat this cigar.

FLAVOR PROGRESSION
This is very much a crawl, walk, and run cigar when it comes to flavor development. The first and last inch are youthful and confrontational with lots of unique earth and mineral elements. Both are extremely easy to overwork, so it helps to take a bit of time between each puff. The transition from the first inch to the middle two inches is when you meet the work horse of the Trinidad line. The classic Trinidad profile shows up in spades: rich earth, moss/nuttiness, wood with volumes of thick smoke.

BURN EXPERIENCE
Overall, this cigar was a pleasure to smoke but didn’t have very much of a wow factor. There were a few corrections that had to be made to the burn line but nothing major. The Vigia does have a tendency to develop some heat in the last inch of the cigar. 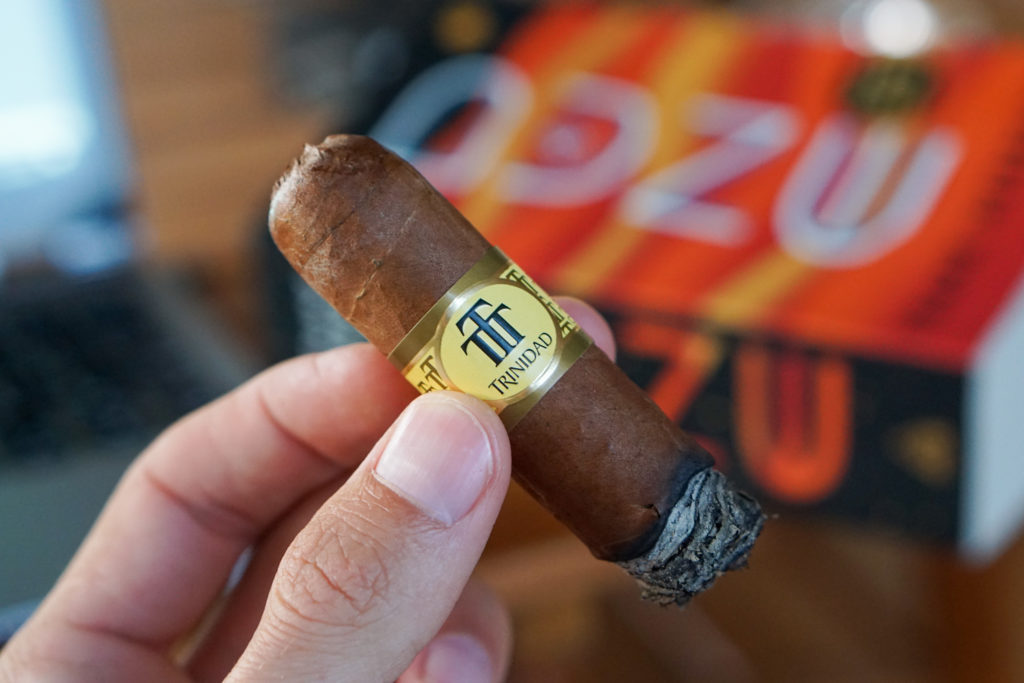 A Cigar for the Modern Individual

The Vigia is a product created with the cigar market of today in mind. Though the Trinidad brand was made famous by the highly coveted Trinidad Diplomatic, the newer vitolas like the Vigia have become staples for the Cuban cigar smoker of today. These short and robust cigars, which have become ever popular in the cigar industry, have helped shorten the time required to sit with a cigar while keeping the flavor full. This is a cigar for the direction minded individual, just enough cigar to relax at lunch and still have time for the office after.