I’ve become a connoisseur of small smokes; commuter smokes are what I call them. Thirty minute smokes. That’s part of living in the Pacific Northwest, where it’s cold and wet for too god damn much of the year. The sun is starting to stick around for a day here and there. That means I’ll be able to smoke larger cigars soon, like the foundation Tabernacle double coronas I have stashed away. I manage to carve out some time here and there when I visit the lounge; I’ll go before or after one of my appointments. But other than that, most of my smoking takes place in the car. I’m new here to the PNW, and while I work in Portland, I live in a small town about thirty minutes north of the city. So it’s Partagas Shorts (which I fucking love), H. Upmann half coronas, Tatuaje’s petit black coronas, Mi Querida short gorditos, Le Bijou petit robustos, Henry Clay Warhawk robustos, Joya De Nicaragua Antano robustos and others. 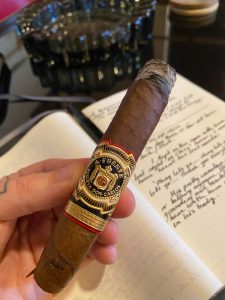 I’m looking forward to being able to smoke outside of our house, with the stars overhead, after putting my baby girl to sleep and giving my lady a kiss goodnight. But these sunny days are still sporadic, so when I can steal some time, I head to the local lounge. With a newborn, it’s hard to steal that time, but every now and then, it works out. When I went the other day before my tattoo appointment, I spent some time chatting with an older black man I’d met a few times before but never had the pleasure of talking to.

He’s in a wheelchair and has a prosthetic limb decorated with the purple and gold of his fraternity. “You tattoo, right? I have something I’ve been thinking of getting” He pulled out his phone and scrolled through to show me a cartoon character in a purple suit smoking a cigar. I noticed it was the same colors as the decorations on his limb.

“We could do that, man; it would be my pleasure. I’ve only made one cigar-related tattoo so far; let’s fix that… What’s with the purple and gold? I see that on your limb there.”

“You have someone paint that for you?” I asked.

“No, it’s actually a t-shirt,” He said as he removed it and held it up for me to see, “I have this guy, and I can give him any shirt I want; he just attaches it on there, look what a good job he does.”

“It looks great; I was wondering how that was done. I thought maybe it was painted…So is that like shellac he puts on there to help seal it?”

The only thing I knew of fraternities was from Old School with Will Ferrell and movies from the 80s. I always assumed they were for privileged white kids (AKA: yuppies). But he told me about his and how he was inducted while at Howard University. As we smoked, I asked him question after question, and he told me all about how it stretched back to 1911.

“When an older brother came up to me and told me to recite Invictus, I’d have to recite it on the spot,” and he went on to recite this poem that I had never heard of:

“Out of the night that covers me,
Black as the pit from pole to pole,
I thank whatever gods may be
For my unconquerable soul.

In the fell clutch of circumstance
I have not winced nor cried aloud.
Under the bludgeonings of chance
My head is bloody, but unbowed.

Beyond this place of wrath and tears
Looms but the Horror of the shade,
And yet the menace of the years
Finds and shall find me unafraid.

It matters not how strait the gate,
How charged with punishments the scroll,
I am the master of my fate,
I am the captain of my soul.” 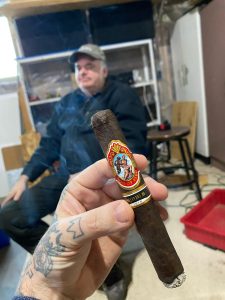 When he recited it, I caught that line, “My head is bloody but unbowed.”

I asked him what it was, and he told me it was a poem called Invictus. I had to get to work, so I thanked him for sharing some of his stories with me.

I looked it up and was thrilled to be introduced to something so powerful. I talked last month about spending a lot of time studying self-improvement, and this poem felt like a mantra. Something I could memorize and repeat throughout the day.

Why did I learn about this poem? Because of cigars, because of a common bond. I’m grateful to that man for sharing his story with me, and I got a lot of inspiration from him.

About a week later, I got a call that my father had a seizure and had to have emergency surgery to remove a tumor from his brain. This was his second surgery in two years, but it was too much, and he only had a few days left.

When I was 18, my mother told me he was not my father. When I was one year old, he found out that I came from an affair. He and my mom divorced, but he still claimed me as his own, raised me as his own, and paid child support for 18 years. It was a lot for me to wrap my head around as a young man. We didn’t talk from when I was 20 or 21 until I was 33. We lost a lot of time.

As I was packing up to fly out to Colorado to be by his side, I wondered who he was to me… Sometimes I called him Jack, sometimes I called him Dad. I knew I enjoyed talking to him and that I loved his laugh. I knew that he was a good man who lived well. I pondered how fate worked out for him, me, and our relationship.

I packed up some cigars to bring with me. The poem was a new mantra for me, and it accompanied me as I flew out. I smoked a Black Works Killer Bee as I drove to the airport and thought about finding a lounge somewhere over the next few days.

Our family was like a grenade that exploded back in the late 70s. We haven’t remained very close over the years, but I was excited to see my brother, who I talked to a few weeks back and found out he was smoking cigars. Whereas sometimes our conversations over the phone were awkward, we excelled when discussing cigars. I brought along extra to share with him.

A day or two after being by my father’s side, my brother told me that our Dad used to like smoking cigars in his NYC office back in the day… That good old 70s and 80s shit. Our father was pretty out of it, but when I asked him if he liked smoking cigars, he got a little excited and said he had a lot of bad habits. When we asked him if he regretted his bad habits, he said no.

He loved his scotch too. So we told him we’d be smoking and drinking in his honor. My brother and I went out to his garage, I drank some scotch, and he drank some Budweiser. I had a God of Fire Serie B, and I gave him a HVC Hotcake. We sat out there and recalled our crazy upbringing, the difficulties, and the challenges. It was over the ancient art of smoking that we honored our pops. Over the ancient practice of smoking, we offered each other our different viewpoints and memories. It was bittersweet to know that Jack and I might have shared some moments like this had we stayed in touch.

It was strange to be on both sides of the life cycle in such a short amount of time. The birth of my daughter Veda was only three months ago, and there I was watching him lean into his death rattle, observing the sunset on his life.

I did my best to stay present and be there with my family. I smoked in the evenings and managed to get out for a few hours to check out a local lounge where I got a Fuente shark. It was delicious and felt special enough to mark a noteworthy occasion in my life. The burn was perfect, and the smoke was white velvet.

When I told my wife about how he used to smoke and how he loved scotch, she suggested I give him some. And so I did. We used these little sponges at the end of a lollipop stick to provide him with water. I took one of those, dunked it in some scotch and water, and put it in his mouth to suck on. He grabbed onto that stick and held it in his mouth. His grunt let me know that he was happy to have it on top of the morphine and adavan. I love that we did that. He was a man who enjoyed the finer things in life; why not let him have what he loved on his way out?

I had to make it back to my own family, and my sister suggested we drink some scotch and smoke some cigars in his honor before my flight. He had hours left. We told him we were stepping outside and would smoke and drink for him. I heard his last words two nights before when I was sleeping in the room with him.

He passed away as my plane took off that night. I lit a Don Carlos for my drive home when I got home. When I arrived at the house and opened my car door, I heard a night hawk shriek overhead.

In Japanese tattoo imagery, we use cherry blossoms to represent the brevity of life. They bloom for such a short amount of time, they’re here, and they’re gone. What control do we have over our time here? How can we best enjoy it? Buddha said that life is like a fast-moving stream, and our lives are but the bubbles on the surface, here and gone… Our smoke can symbolize something similar. We have these moments in time; we have our short little commuter smokes, our toros, and lanceros. Our burning leaves to puff on. We have these reminders to live and enjoy our time here. Everything is transitory. The hands that rolled the cigars we smoke will find that same end to their story as the rest of us. How fortunate all of us are.

Through it all, I have that poem to hold in my head, reminding me that I am the master of my fate and the captain of my soul. We have no control over when our time will come, but we have a say in how we live.

Live well and enjoy my friends. 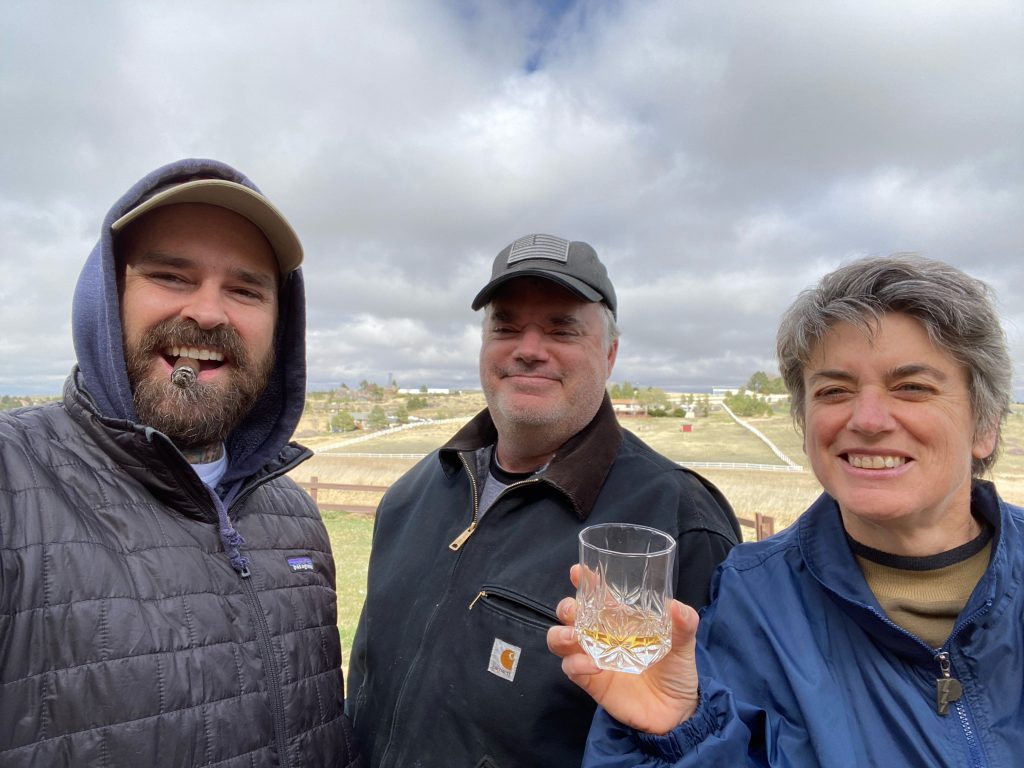