Anytime I see a wrapper this dark on a cigar, I immediately think twice. Will it be a pepper bomb? Will it be too spicy? The Brazilian Arapiraca wrapper on the Epic Maduro is dark and toothy, but don’t be scared away! While the Maduro may be on the full end of the spectrum, it is not the least bit overwhelming. The tasting notes of baking spice, wood, coffee, and pepper play with your palate and tease your senses.

The Epic Maduro is one of Epic Cigars six core lines. Initially released in 2014, the Maduro Reserva used a Dominican olor binder. Before its release in July 2014, the binder was changed and is now a Cameroon binder, wrapped in  Brazilian Arapiraca wrapper, with a mix of Dominican and Nicaraguan filler.

I smoked two Epic Maduros for this review. One was provided by Epic Cigars, the other I purchased myself.

WHAT’S ON:
Squirrels fighting in the yard 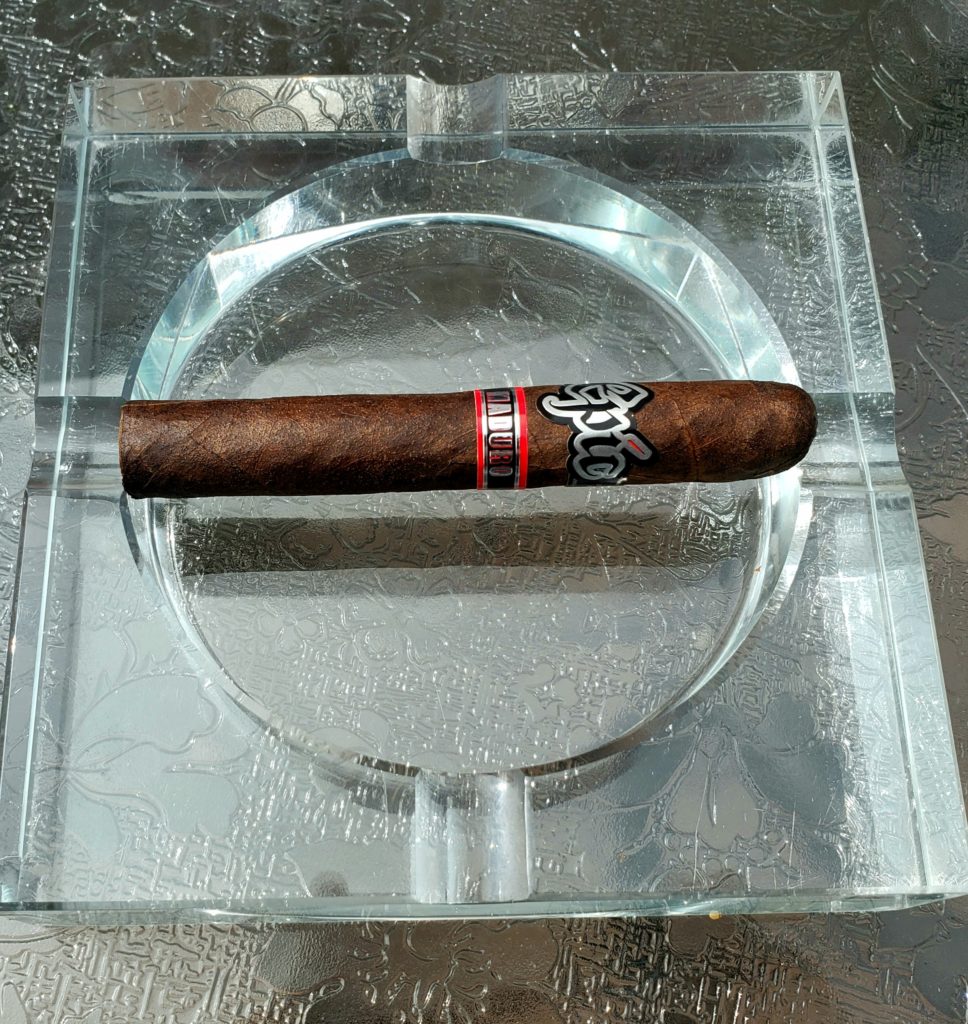 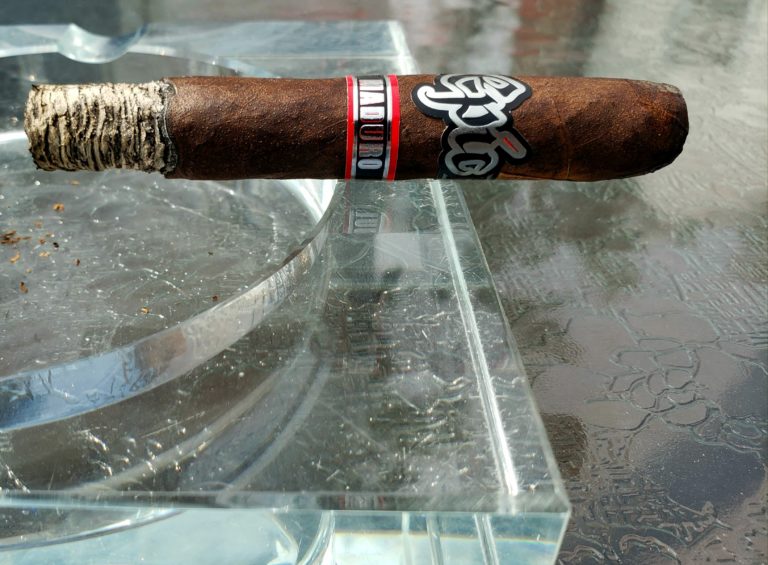 As with the majority of Epic’s cigars, save for the Project E, the Maduro is double banded. The main band sports the company’s name and logo. The silver and black, with a red accent above the “i”, sets it apart from other bands in the industry. Their is an air of rebellion around the band and is certain to stand out in a packed humidor. The second band, which serves to announce which Epic cigar you are smoking, matches the color scheme on the main band. 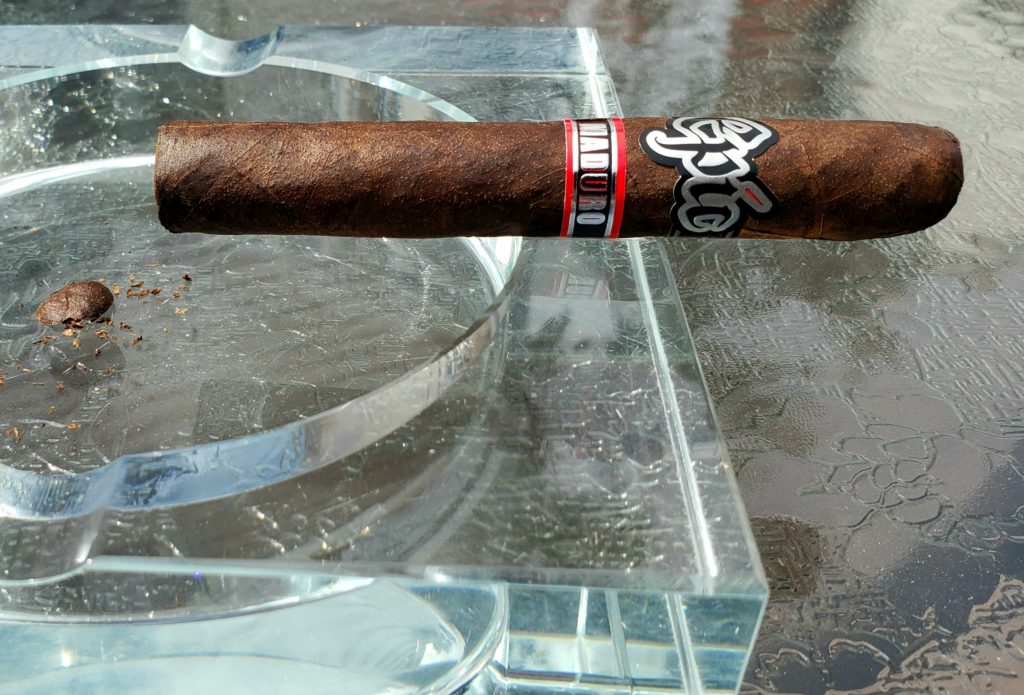 CONSTRUCTION
The dark shade of the Brazilian Arapiraca wrapper hints at the experience that is to come. It is rough to the touch and extremely toothy. There are no visible blemishes and several visible veins that add to the character of the cigar. The cap is seamlessly and expertly applied. The Epic Maduro looks the part of a full flavored cigar. 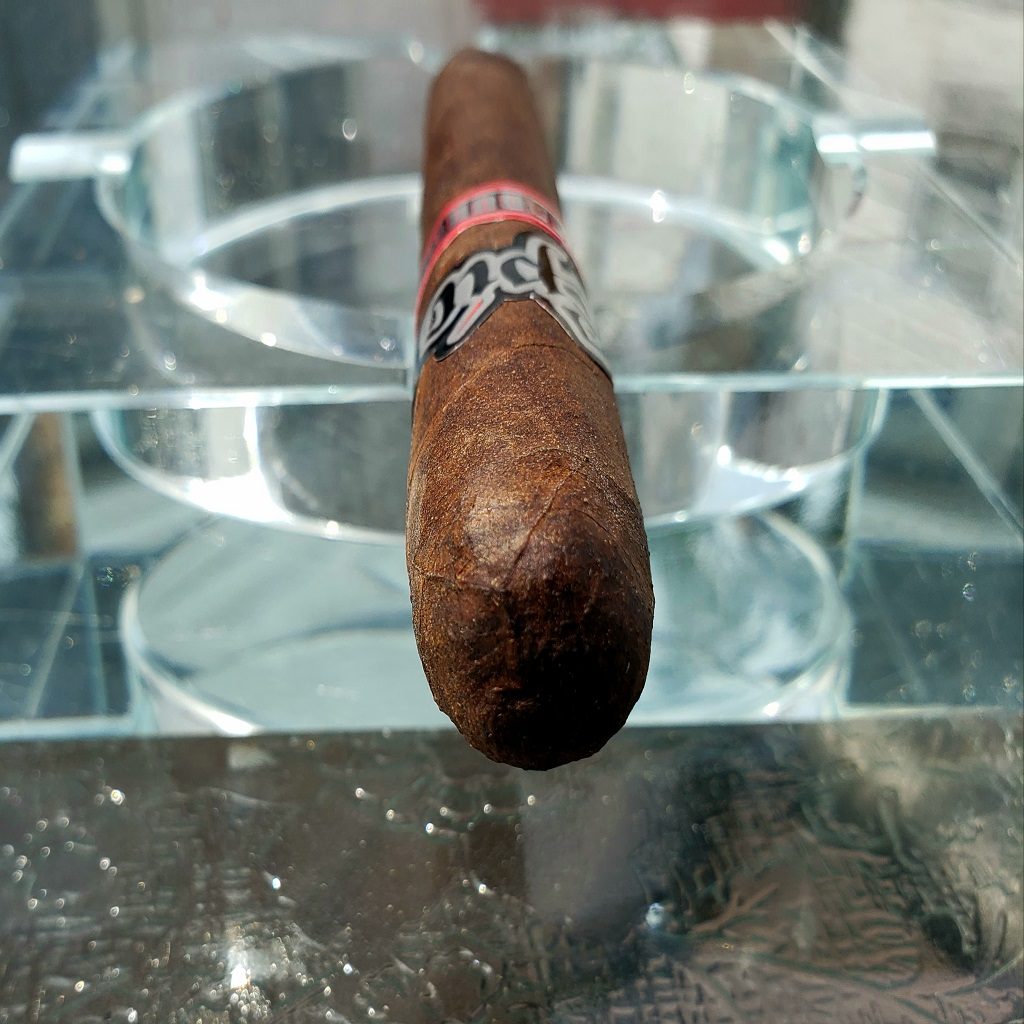 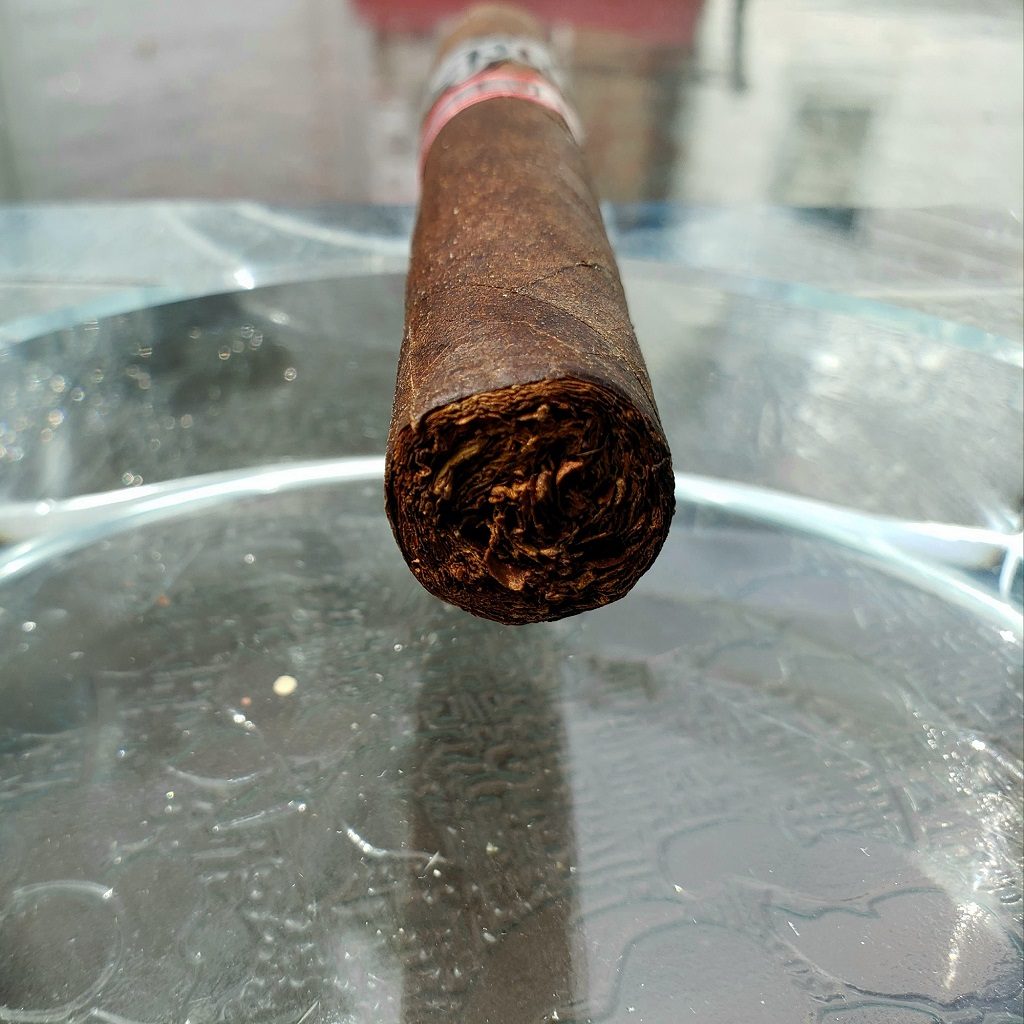 AROMA
The aroma from the wrapper is the unmistakable smell of cedar. When I go to smell the foot cedar is still present but it is accompanied by a musty, almost barnyard note. It is a smell that I have come to appreciate and I look forward to what this experience has to offer.

COLD DRAW
The cold draw reveals notes of chocolate and tobacco. Nothing surprising given the shade of the wrapper. 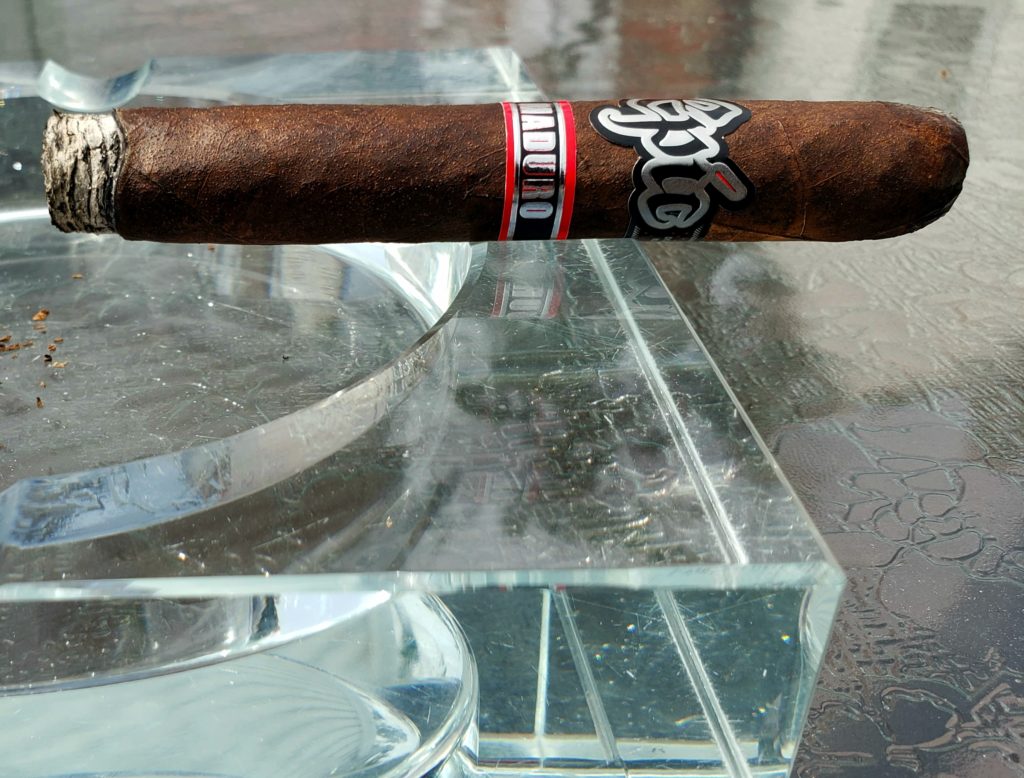 The draw on this is spectacular. For me, it is the perfect amount of resistance without being too open. It lights effortlessly. The burn line starts off wavy and never quite burns razor sharp; however, it never requires a touch up and is well within acceptable limits. The interesting part was how both of these cigars started differently. The first was a smooth and easy first few puffs, while the second started off with a blast of pepper. It could be the difference in age between the two, as the first had been sitting in my humidor for over a year.

SMOKE
The smoke was white and creamy, with a good amount of smoke production. 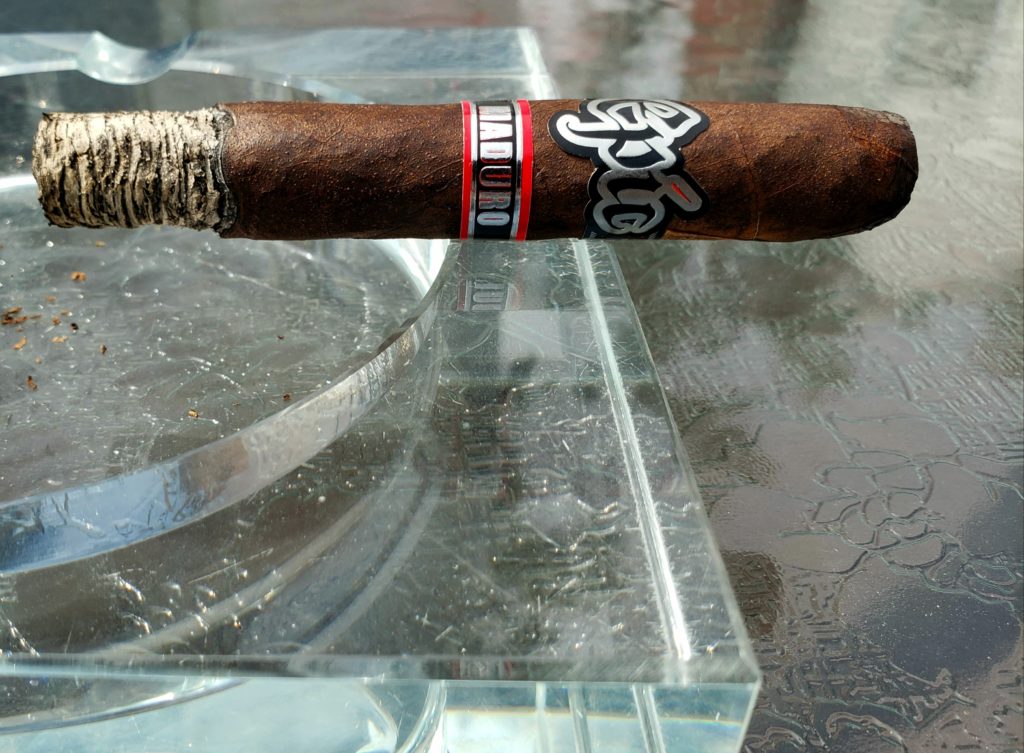 There is an initial blast of pepper that dies down within a few puffs (second cigar). The retrohale delivers a fantastic cinnamon note. SPICY! The pepper quickly fades. There is a definite hint of chocolate on this first third. It teases me as I smoke. The sweet aftertaste lingers on my palate.

The ash is white, tightly packed, and not flaking at all. The burn line is wavy, but nothing egregious. I’m surprised at well this ash is hanging on. This cigar is built like a tank.

The retrohale is where it is at with the first third. The cinnamon plays well with the hint of chocolate. A Cedar note appears and begins to come and go. As the first third goes on, the chocolate note gives way to a nice white pepper, and the cedar becomes the dominant flavor. 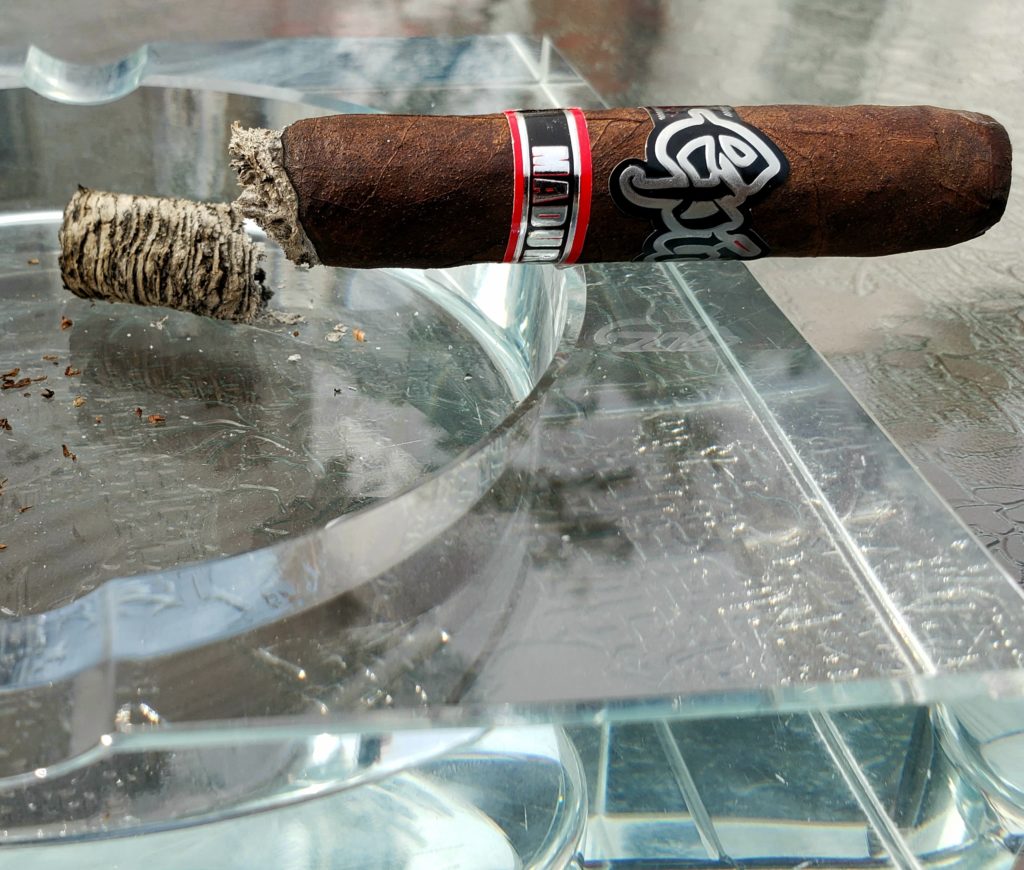 The second third starts with a pepper note tingling the tongue. The chocolate note comes and goes, weaving its way around the predominate cedar/wood note. This second third seems slightly more salty than the first third.

The burn line is still wavy, but no are corrections needed. The ash is still holding on. I finally ash to avoid a lap mishap. The falls tightly packed with very little flaking.

The smoke output is great; it coats the tongue and is extremely satisfying to retrohale. It’s a very substantial and satisfying experience. There is a campfire element to this cigar that is extremely pleasant.

As the middle third begins to wind down, the pepper begins to become the dominant note. 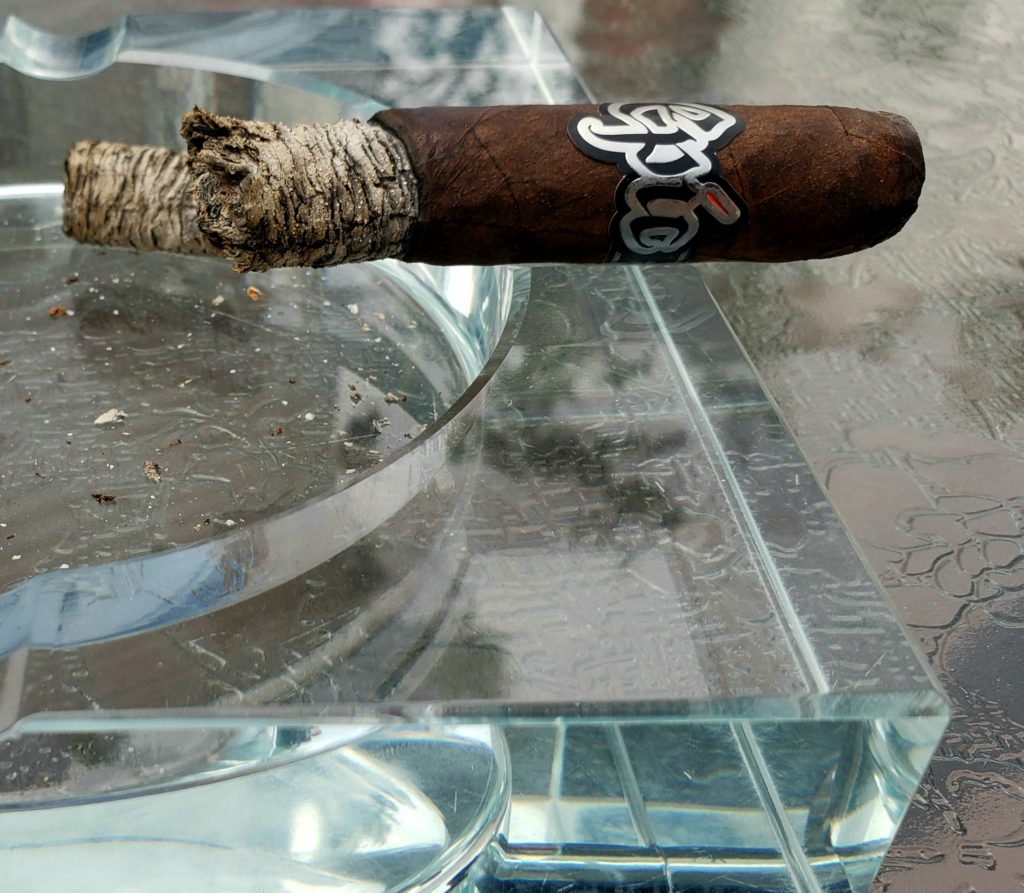 The final third begins with pepper, and wood. It is like a campfire in my mouth, and I mean that in the best possible way. The saltiness is helping to coat my tongue, ensuring I’m tasting everything. Baking spices return on the retrohale and pepper tingles my tongue.

The burn line is still wavy. I ashed again to avoid ashing on myself, and it feels like a mistake. The ash wanted to hold on. This is a well constructed cigar.

As the cigar begins to wind down, the pepper begins to ramp up. While it never turns into a “pepper bomb, ” the change is noticeable

FLAVOR PROGRESSION
The flavors of the Epic Maduro are straightforward and consistent throughout the cigar: wood, pepper, baking spice, salt. The big difference is the chocolate note in the first third.

BURN EXPERIENCE
There were zero burn issues. Both cigars smoked for this review required no touch-ups and no re-lights. The burn may not have been the straightest but it never presented an issue, other than poking at my OCD.

The Epic Maduro Robusto shines in the first third! It starts out strong and bright, lighting up your palate with notes of wood, chocolate, and baking spice. It is, without a doubt, the star of the show. As I progressed through the following two thirds, I was met with similar notes from the the first third: wood, baking spice, and pepper. There was some salt and bitterness thrown in for good measure, but it never kept me as interested as the first third. That doesn’t mean that there wasn’t nuance and subtlety! The wood note progressed from Cedar to charred wood, to campfire. The chocolate note went from milk chocolate to a bitter dark chocolate. This cigar is well blended and well constructed. If you are a fan of maduro cigars and haven not given the Epic Maduro a shot, you should get your hands on them ASAP!