Initially shown off the 2015 Trade Show, the LH Premium Cigars Colorado has grown from having just three vitolas to now seven. Rolled at Tobacos de Costa Rica, the LH Cigars Colorado uses an Ecuadorian Habano wrapper, over a Nicaraguan binder and Nicaraguan, Ecuadorian, and Peruvian filler, to bridge the gap between their Claro and Maduro lines. If we were going to break cigars down into three categories of strength, mild/medium/full, then the LH Premium Cigars Colorado would be Nick Syris’ “medium” offering. Things are rarely that simple, though. As discussed before, Master Blender Nick Syris offers his cigars as a sort of “Cuban bridge.”  Will the Colorado be different?

WHERE:
On my back deck. 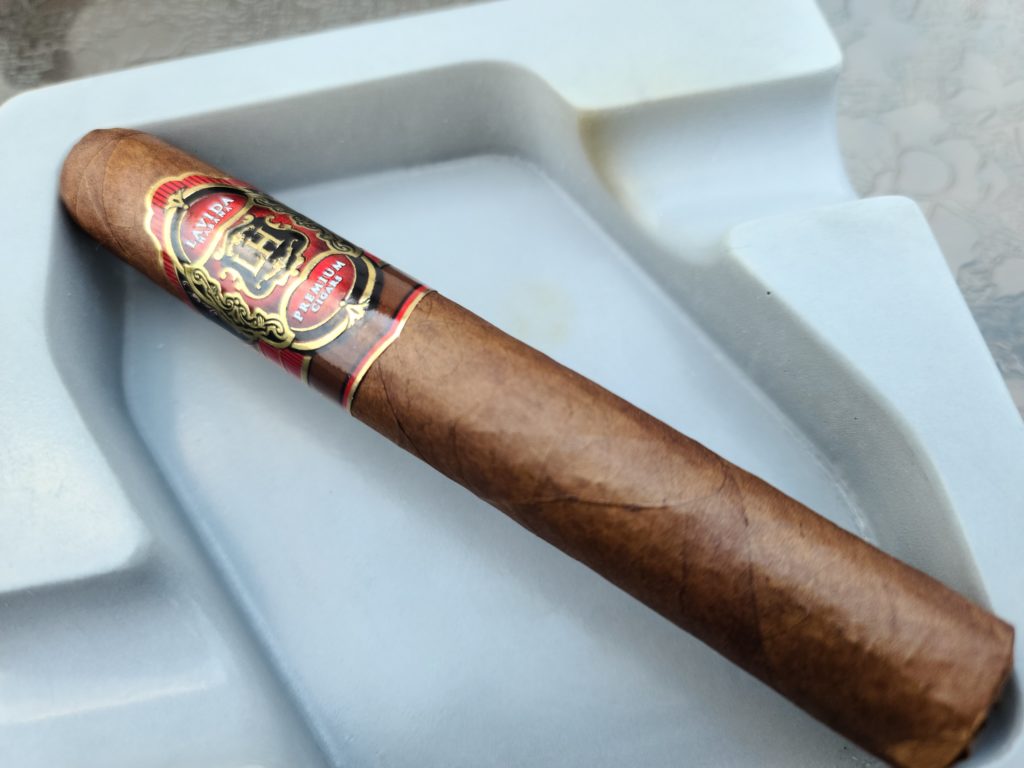 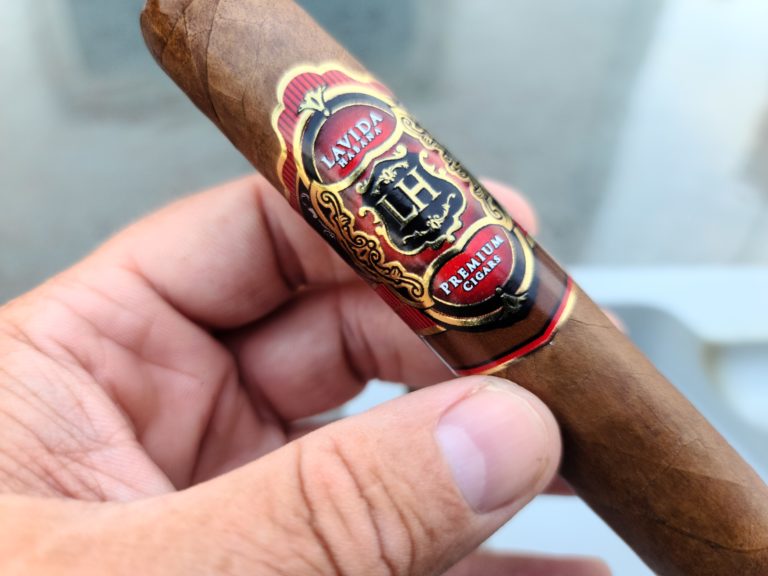 The band is an exact duplicate of the LH Cigars Claro band that I will copy and paste below in order to save you a click; however, there is one minor but important difference. The three core lines (Claro, Colorado, Maduro) are identified by the color of the stripe near the bottom of the band. In this case, the Colorado is denoted by the brown color stripe.

The band is an elegant design that sports the LH Premium Cigars logo. According to Nick Syris, one of his favorite bands is the Fuente Fuente Opus X band. He wanted the band’s color scheme to be similar. 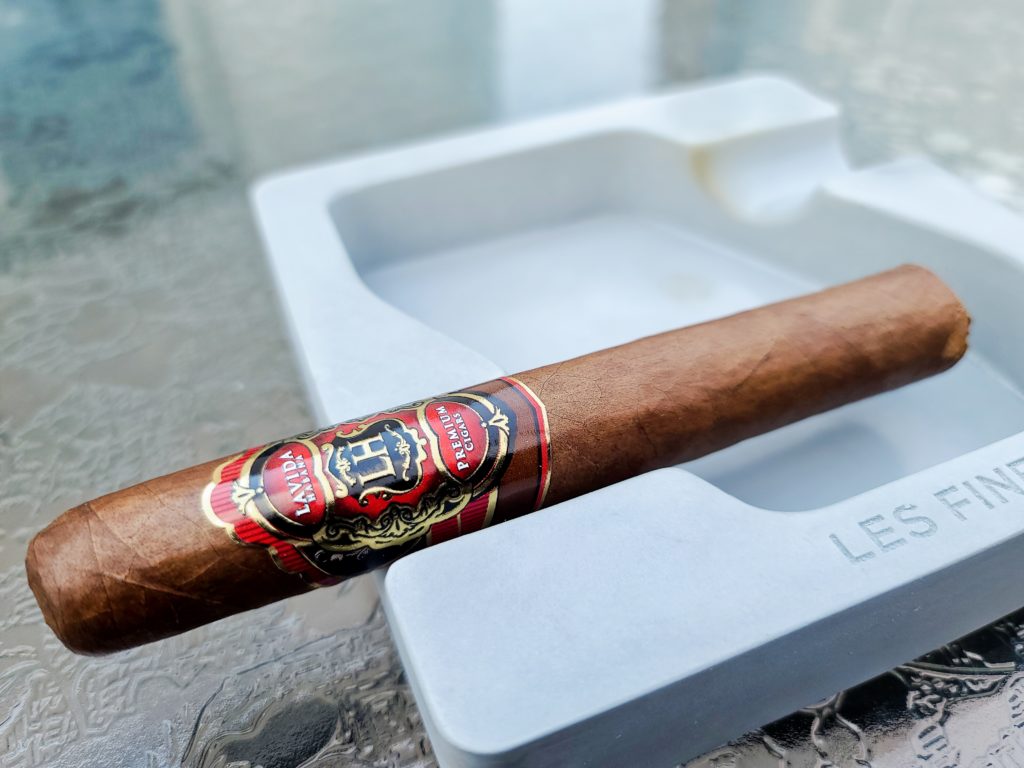 CONSTRUCTION
The Ecuadorian Habano wrapper is the shade of caramel. The wrapper is smooth to the touch and has a nice layer of oil on the surface. One of the LH Colorados that I smoked for this review did have a small piece of the wrapper come off while being shuffled around in my humidor. I only mention this because it is visible in the above picture and I did not count off for my clumsiness. Otherwise, the Colorado has a few visible veins and one visible seam.

AROMA
There is a strong note of barnyard coming from the wrapper. It is followed by notes of sweet tobacco, chocolate, and cedar from the foot.

COLD DRAW
The semi-closed foot causes more resistance on the cold draw than I’m used to. Notes of sweet tobacco, chocolate and nuts shine through with just a hint of baking spices. 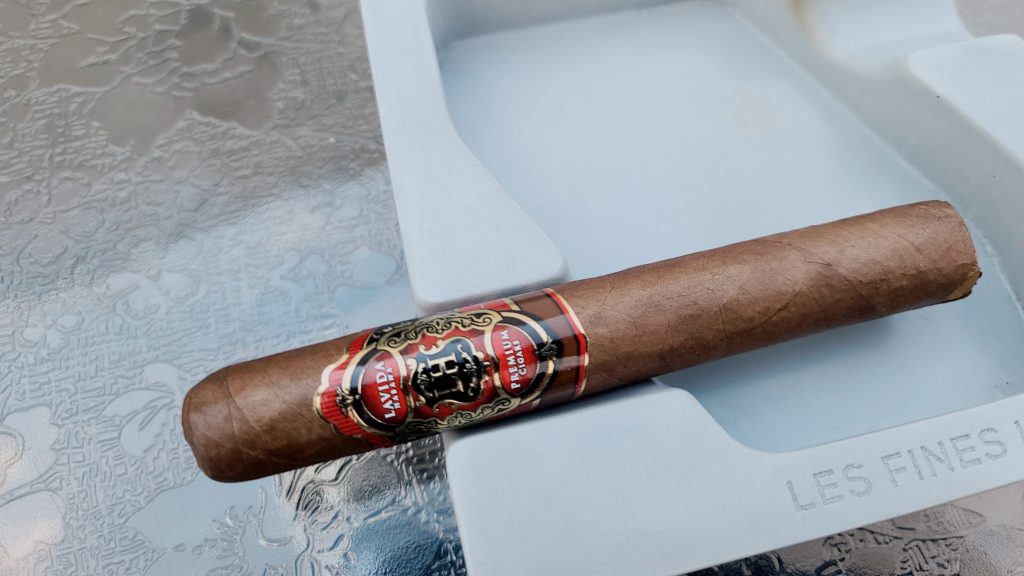 LIGHT & DRAW
Cut:  Xikar Xi3
Fire:  Xikar Tactical 1
There is an initial blast of pepper and spice that comes from the closed foot. It’s not off-putting, but it did surprise me. There is a burnt sweetness coming through, very reminiscent like a roasted marshmallow. Pepper claws at my senses. The baking spices are strong off the initial light. The burnt taste fades and leaves a semi-sweet chocolate note. 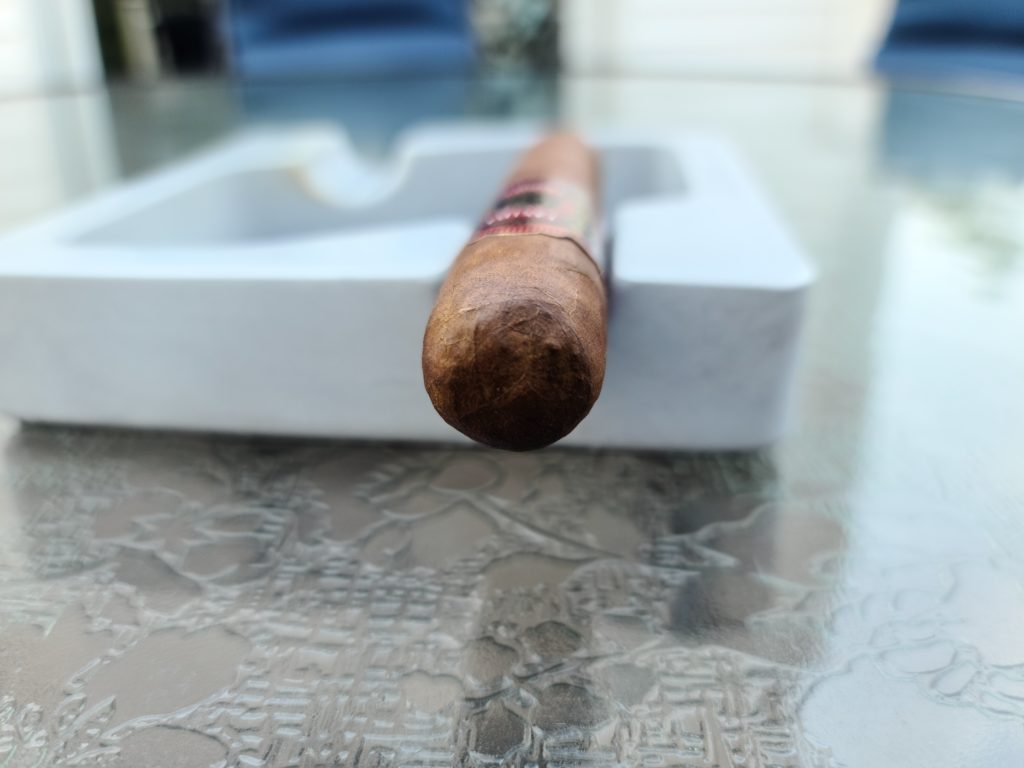 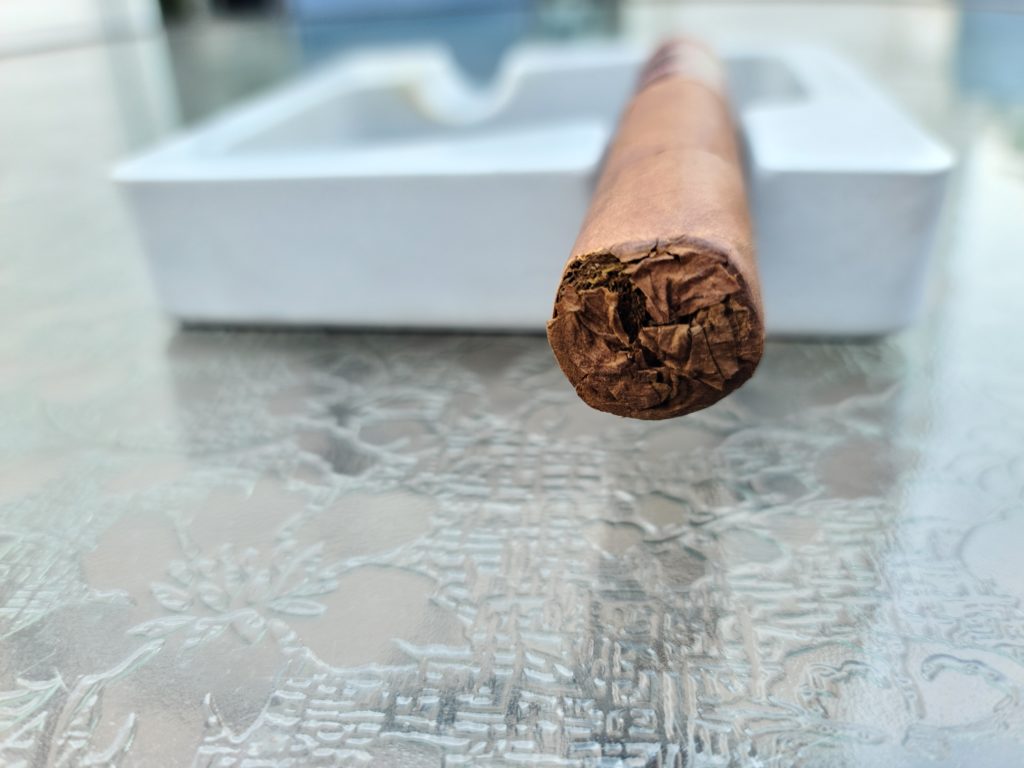 SMOKE
The smoke is thick and creamy, leaving a coating on my palate. With each puff the smoke billows forth and fades as soon as I put the Colorado down. 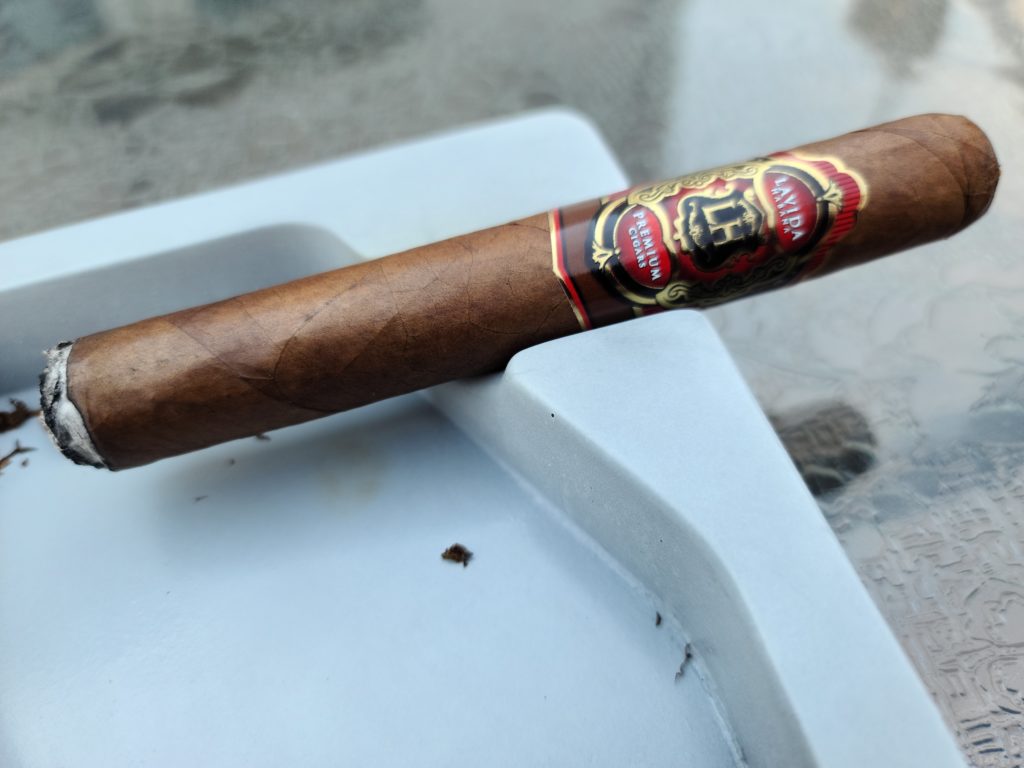 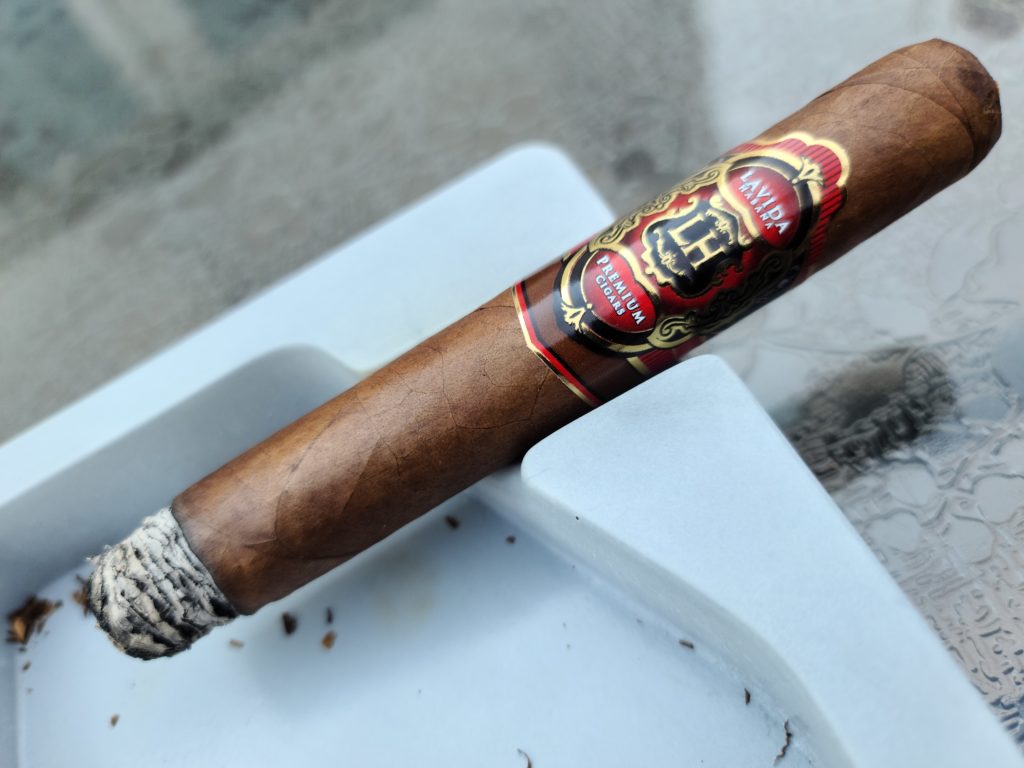 There is a creaminess to the smoke that seems to enhance the marshmallow note. Slightly sweetened chocolate lingers on my palate. Notes of nuts, and baking spices float in and out. There is a woodiness that adds a depth to this first third. White pepper on the retrohale. The Colorado has mellowed out quite nicely since the initial light, though my throat still feels the effects. The ash is compact and gray with streaks of black. The burn is sharp and even…until I carelessly knock the cigar from its rest, prematurely depositing the ash into the tray. Vanilla (marshmallow) and honey are the dominant flavors. The chocolate has faded into the richness of the woody note. Sweetness still lingers on palate. The Colorado is surprising me. It’s similar to the LH Claro in the sweetness that both have, but it’s not quite breakfast. There’s more of a roasted nut quality that gives the Colorado more body. The burn line starts to waver, ever so slightly. There is a slight saltiness that begins to breakthrough. The sweetness begins to fade as I near the end of the first third. 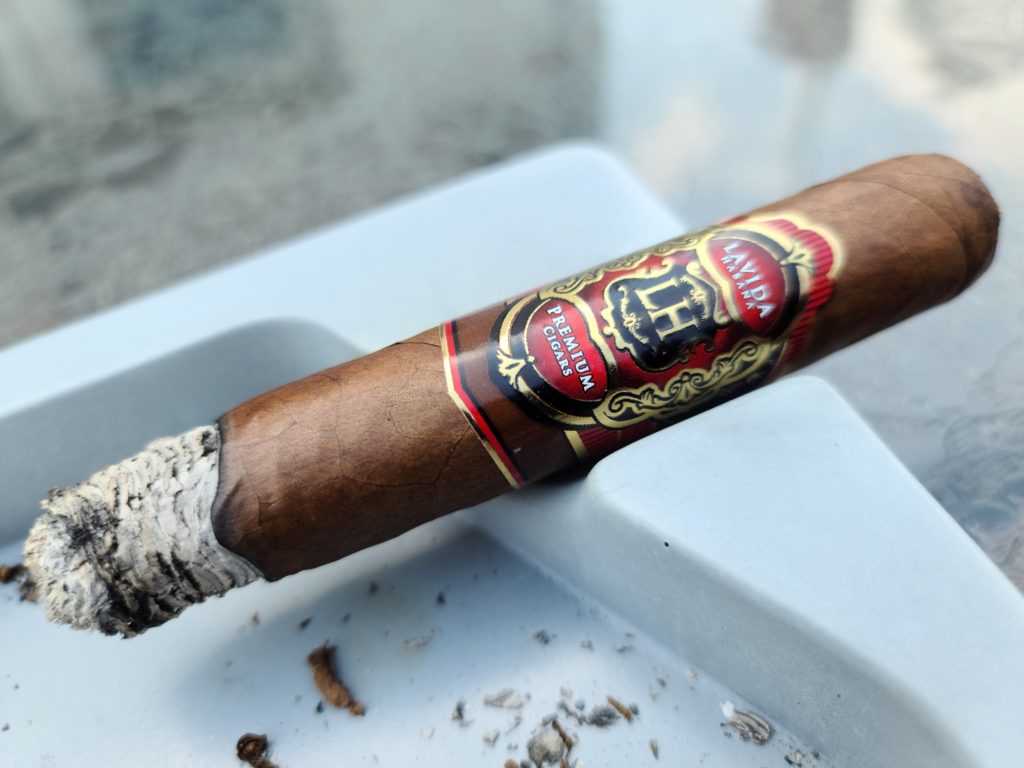 What was sweet is now savory. The rich woody note is still there, but there is a musty earthiness to it. The sweetness of the marshmallow has given way to a salted caramel. What lingers on my palate now is a creamy, buttery note…not unlike avocado oil. Baking spices and black pepper are on the retrohale. The ash  is still compact and not flakey, despite my carelessness. The burn line remains even and the smoke is creamy and has a nice mouthfeel to it. The buttery avocado note remains. This middle third begins to have an almost licorice note to it. It’s the perfect contrast to the earthy notes that have dominated this third. The retrohale continues to produce notes of white pepper and baking spices. The Colorado begins to ramp up, ever so slowly. What started as a medium bodied cigar is no a medium+. It’s not off-putting in the least. The vanilla note has made a return as the licorice note fades. The musty notes seem to be fading, too, replaced by a sweet cream and graham cracker. A coffee note starts to make itself known. It’s a welcome addition the parade of flavors of the Colorado.

The burn line of this final third is less than straight. In fact, it’s just crooked. The coffee note has slowly transformed into a rich, decadent mocha note. The retrohale is red pepper with a slight vegetal taste on the backend. The avocado oil is still there, as is the creamy mouthfeel. It’s enhancing the slight sweetness that I’m picking up from the mocha. If it was anymore chocolatey it would be a hot chocolate. There is a bitterness that cuts the richness…almost campfire-esque but with much less smoke. There is a mushroom quality to it, as if the campfire was mostly put out by rain, but still smolders. The burn line has self corrected and the ash falls effortlessly into the tray. Roasted nuts make a return and add to the richness. The smoke starts to dry out a bit as the creaminess of the avocado oil fades. Oddly, there is still a buttery note that lingers on my palate. The sweet mocha fades and the campfire that once smoldered has roared back to life. Nuts still add their voice to the chorus of flavors and act as a nice contrast to the bitterness of the charred wood. And with one last gasp the sweet milk chocolate returns for the last few puffs before I set the Colorado down.

FLAVOR PROGRESSION
What starts out as a medium strength profile ends with medium-full notes. The Marshmallow, chocolate and baking spices make for an interesting first third that doesn’t quite carry over into the second third. The second third, for me, doesn’t stand out as much as the first and final thirds. The middle third seems to abruptly change the flavor progression from sweet to savory. While it adds depth to the cigar, it almost seems a bit out of place. The final third brings it all back together and makes the middle third seem less jarring. Regardless, the flavors are complex and nuanced without being overbearing.

BURN EXPERIENCE
The burn experience was where the Colorado lost a few points. While it never needed a relight or touch-up, the burn line was never razor sharp. To its credit, it burned a lot more straight on a windy day that I took the pictures, but it was never a consistent burn. 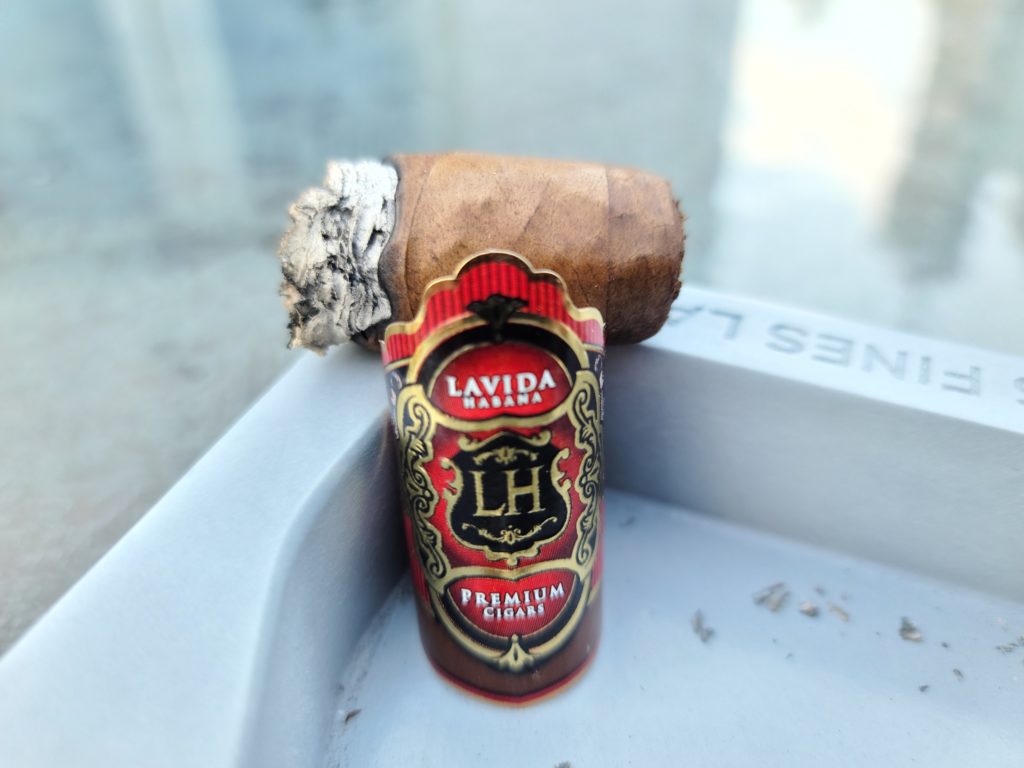 A SWEET AND SAVORY EXPERIENCE.

The LH Premium Cigars Colorado is a cigar that is bookended by sweetness. The first third is a creamy, chocolatey experience that immediately has you wanting more. The second third seems a bit out of place but acts as harbinger for the final third. More savory and salty notes come forward letting you know that the depth the Colorado has is on it’s way. The final third leaves you with notes of Mocha and wood in the most satisfying of ways. Notes of nuts, baking spice and pepper are found throughout, making the LH Premium Cigars Colorado Toro a cigar experience that you have to try.