Cigar Review: Villa Casdagli Toro Lives Up to its Namesake

The Villa Casdagli line may have been first shown off at the 2021 Tobacco Plus Expo, but the seed (if you’ll pardon the pun) was planted eight years ago in Costa Rica when Jeremy Casdagli first met Don Olman of the, then, Vegas Santiago Factory. Since then, Jeremy has worked with Olman on special projects and in 2012, Olman introduced Jeremy to his “mejorado” (or improvement) process. According to Casdagli’s website, Olman’s “mejorado” process is “where many of his tobaccos that he imports go through a further fermentation process for up to 4 months in the “pilon.” It should come as no surprise that the name of the line, Villa Casdagli, celebrates the Casdagli family home in Cairo, Egypt.

The blends themselves differ slightly, depending on the vitola. While each vitola has an Ecuadorian wrapper and binder, the Pigasus and the Robusto have twice the amount of Peruvian filler that the Toro and Corona Gorda do. The vitolas themselves have a bit of of a history, too. The Pigasus figuardo size pays homage to the original “Flying Pig” size that was first used for Bespoke Cigars (now Casdagli Cigars) in the 1990’s. The Corona Gorda only came about due to the insistence of Casdagli’s American Ambassador and international Sommelier, one Vlada Stojanov. Jeremy, in fact, now refers to Vlada as the “godfather” of the Corona Gorda vitola.

It is also noteworthy to mention that Casdagli Cigars is currently running a Villa Casdagli Campaign. While you’re enjoying a Villa Casdagli cigar, make sure you look under the band for a special mark. There are a total of 24 bands that have a mark and handwriting which denotes a prize. The prizes include Villa Casdagli branded Les Fines Lames cigar knife, cuff links, ashtrays, pocket squares, and silk neck scarves.

WHERE:
On my back deck

WEATHER:
85°, 66% humidity, and a gorgeous sun beginning to go down on the horizon

WHAT’S ON:
The sounds of a summer evening in the Midwest 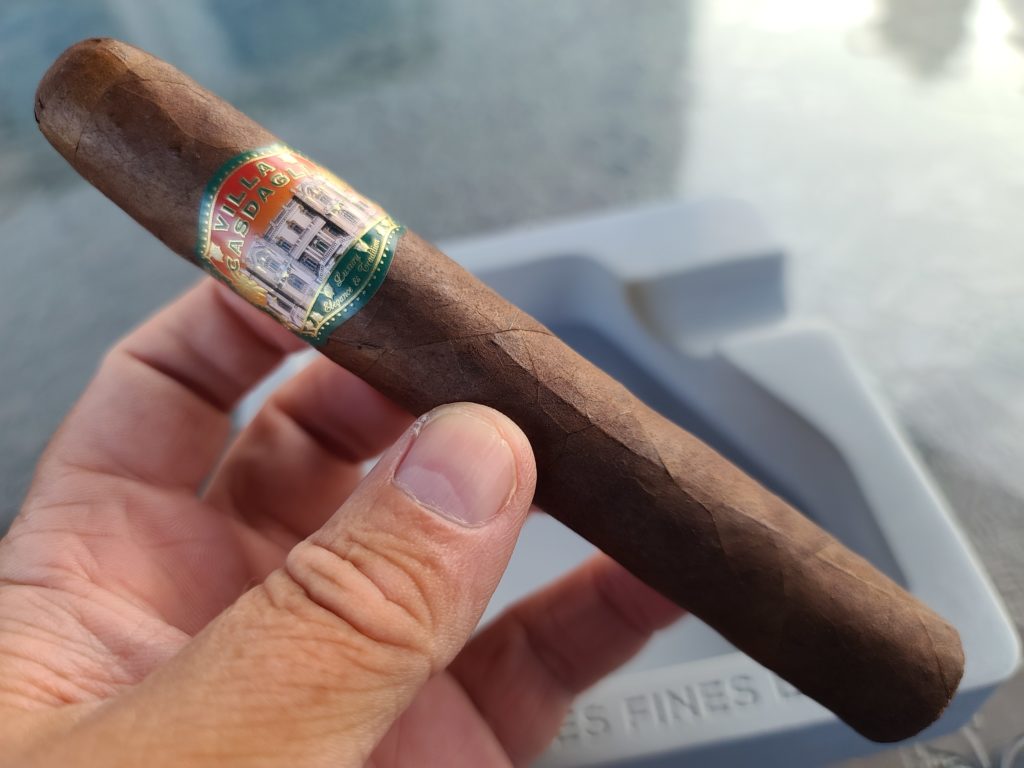 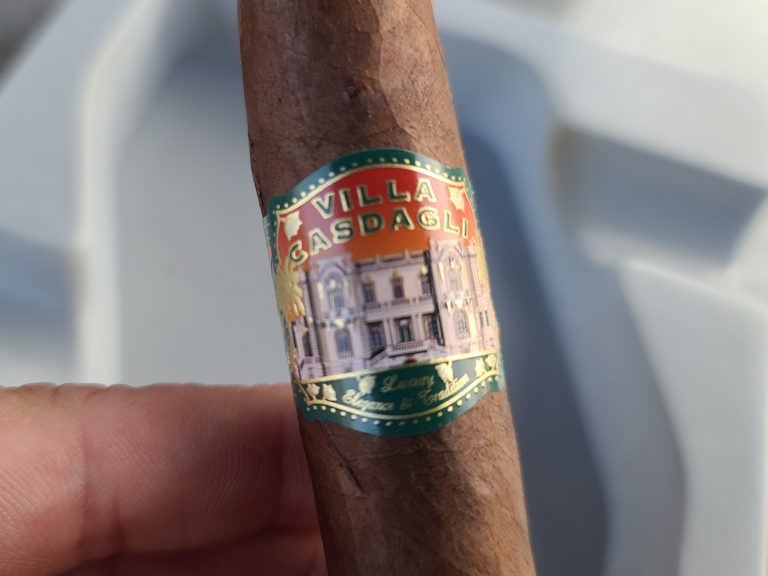 The band is gorgeous. The band is a beautiful blend of green, red, and orange with gold accents. “Luxury, Elegance & Tradition” are written at the bottom. The family home of Casdgali is proudly on display on the front of the band. The back of the band uses the Casdagli family crest, which features the Colossus of Rhodes, as way to easily remove the band from the cigar. Besides being beautifully executed, the band does a great job of conveying the pride Jeremy has in his family’s heritage and the respect he has for his family traditions. 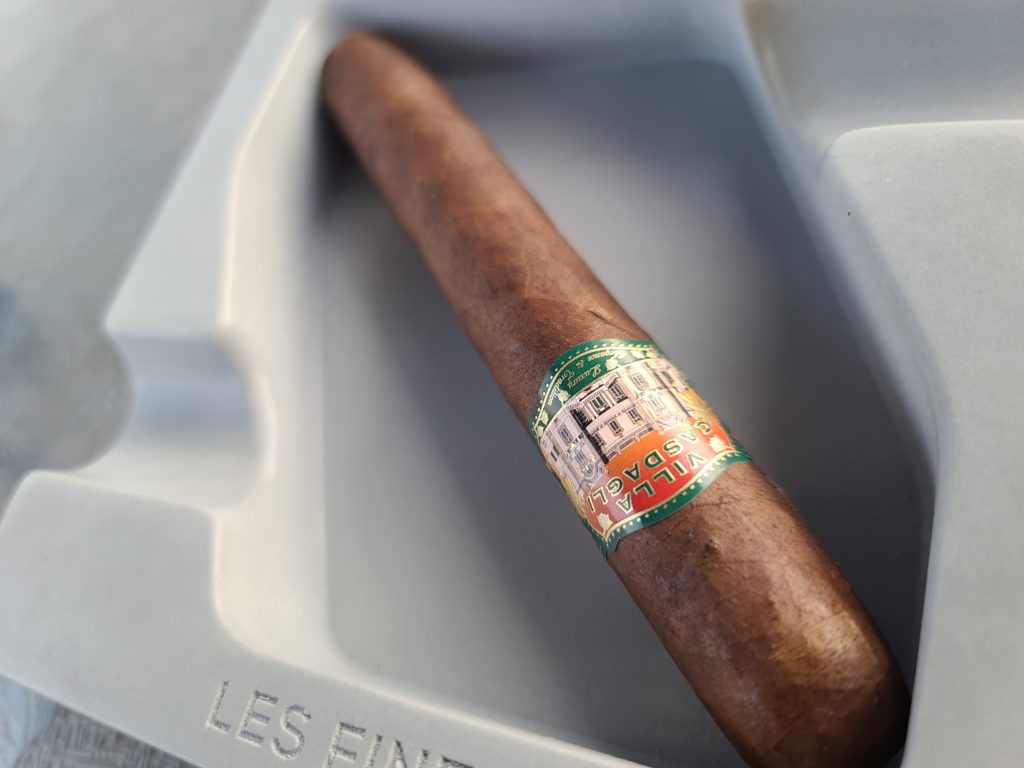 CONSTRUCTION
The Ecuadorian wrapper has some tooth to it. It’s rough to the touch and has a slight sheen of oil. There are a few veins and bumps, one visible seam. The Villa Casdagli does not have an overly dark wrapper, but it is certainly not a connecticut. An almost dark caramel color somewhere between maduro and natural.

AROMA
The smell of hay and barnyard emanate from the wrapper. An almost floral note comes from the foot of the cigar, accompanied by an almost fruity scent.

COLD DRAW
The draw seems a bit open, at least more than what my personal preference is, but it is nothing that will cause a problem. There is a sweetness on the cold draw not unlike milk chocolate, with a nice fruity note and hint mixed nuts. 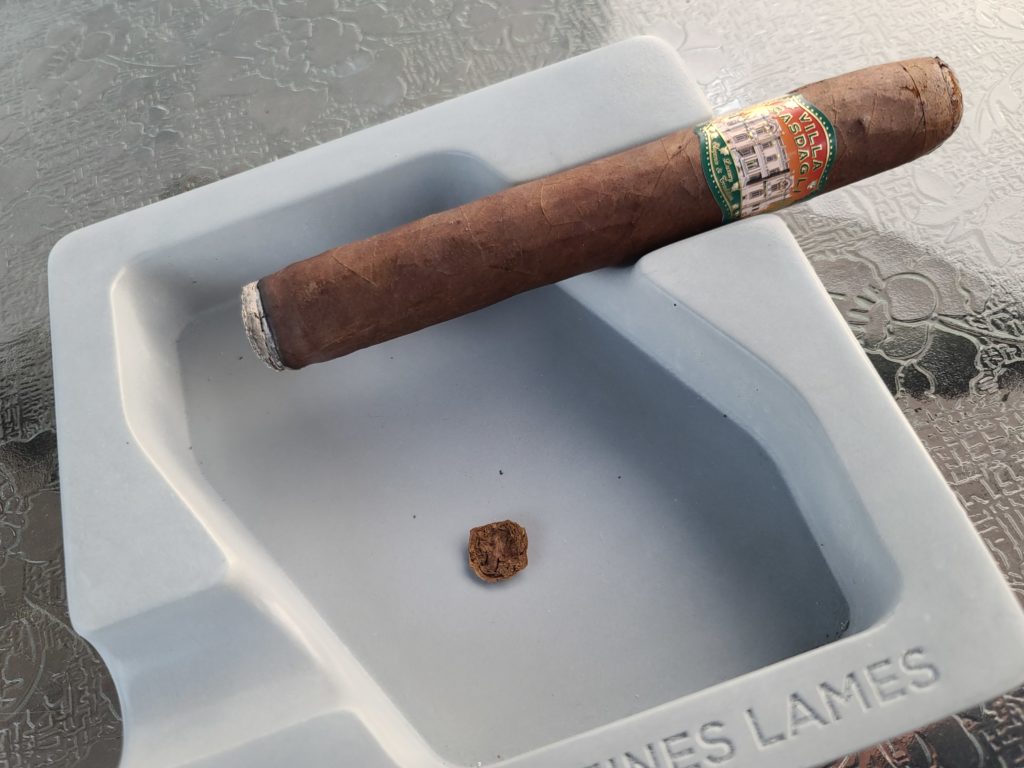 LIGHT & DRAW
Cut: Le Petit Villa Casdagli Cigar Knife
Fire:  Xikar Tactical 1
I really do enjoy using the Le Petit cigar knife from Les Fines Lames. I have become quite the pro at cutting off just the cap. My every day lighter, the Xikar Tactical 1, toasts the foot with ease and that’s when I first notice the aroma from the smoke. It is the first time that I can remember thinking, “Wow! This smoke smells great.” The Villa Casdgali Toro lights easily and its journey begins. 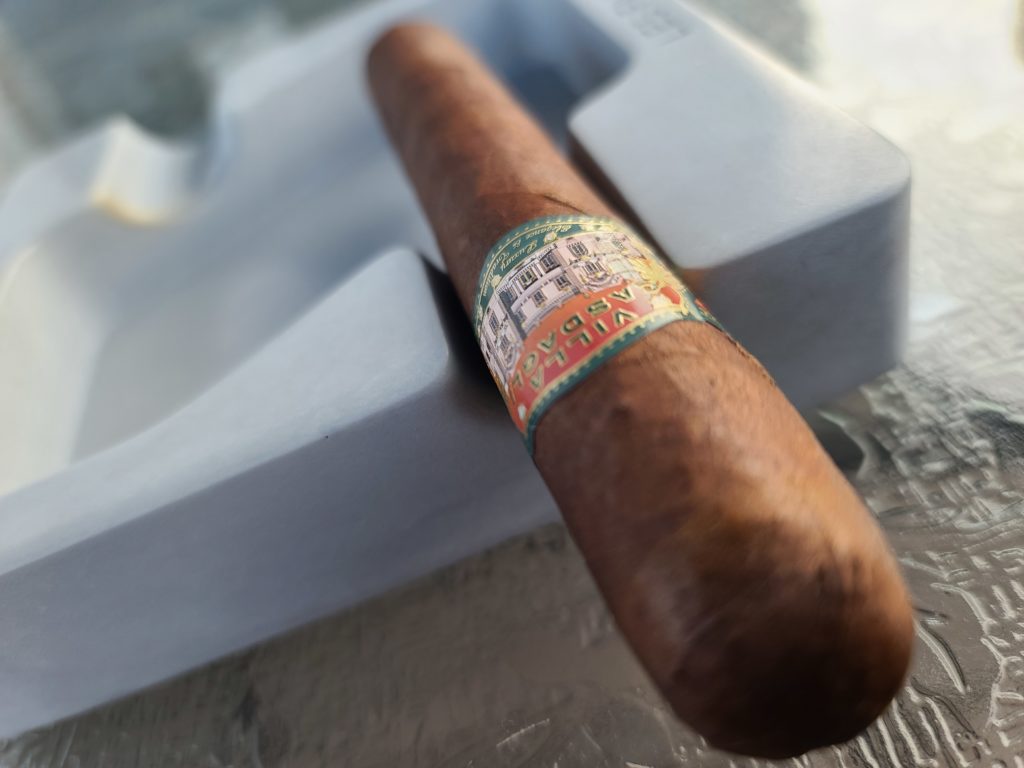 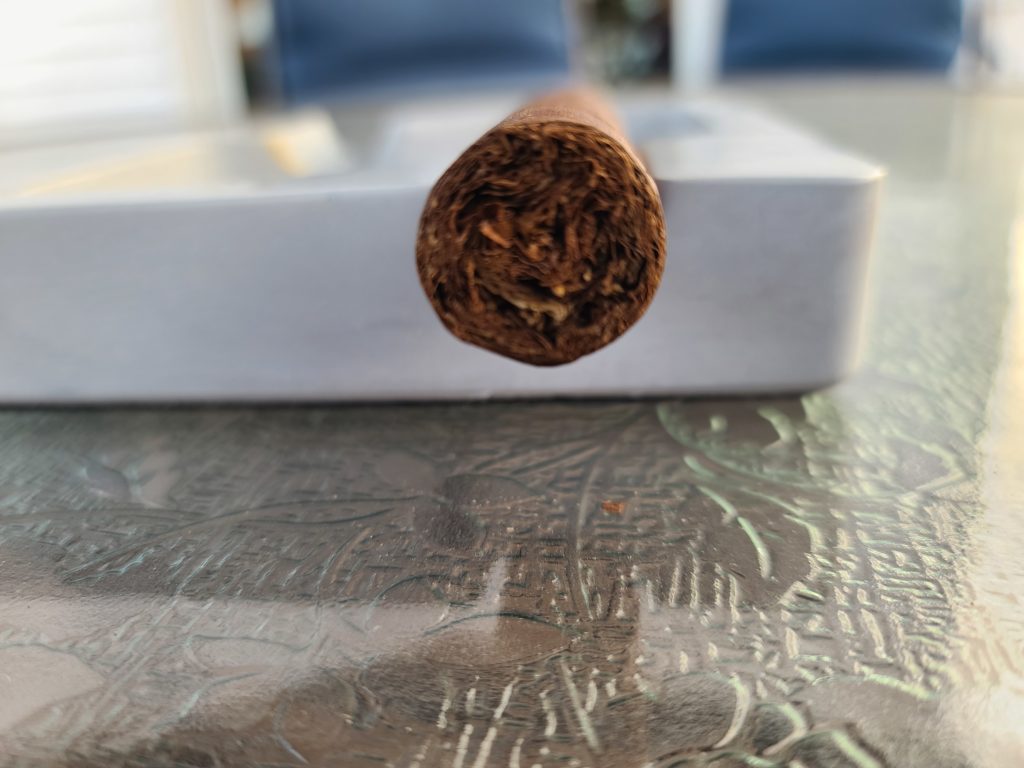 SMOKE
The Villa Casdagli produces a great amount of smoke! Voluminous amounts of white smoke fill my mouth and billow from the cigar with every puff. When the cigar is at rest, the smoke leaks ever so gently from the foot. It is just enough to remind you that the cigar is lit. The smell from the freshly lit Villa Casdagli is intoxicating. It has a sort of floral quality that is amazing. 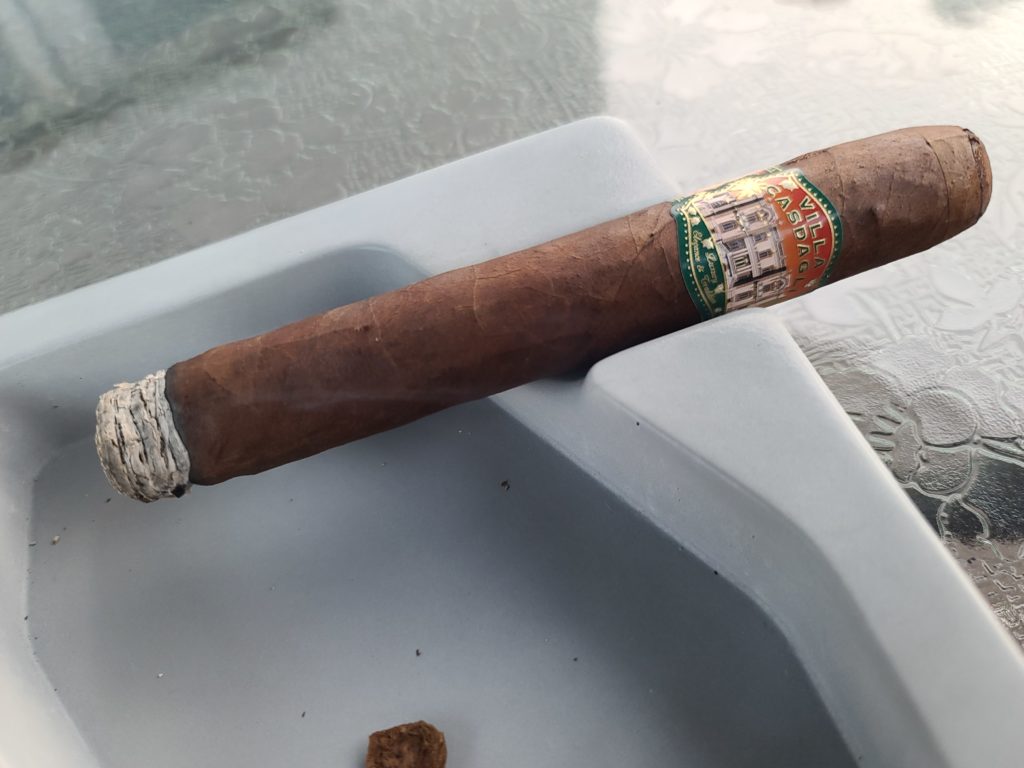 There is a tanginess that is immediately noticeable but that I can’t quite place…, pepper on the initial light. The ash is white. Fruit…, or is it vanilla? It starts to linger on my palate. This might be more bold than what I’m used to from Casdagli. There is a fair bit of pepper on the retrohale. The burn is straight, but I expect nothing less from Casdagli. Is that candied nuts I taste? The milk chocolate from the cold draw doesn’t seem to be anywhere around. The fruity or vanilla note is the dominant flavor so far, especially without retrohaling. The retrohale is bold, black pepper. It’s quite contrast. The fruit and nuts on the palate are quite pleasant. The burn line is a bit wavy, but nothing out of the ordinary. The ash is white with streaks of grey and black. The ash is mostly compact with a few flakes visible. There is a subtle hint of chocolate coming through with an almost subtle hint of hay. The smoke is more dry than it is creamy, but it fills my mouth with ample amounts. The smoke smells amazing. This might be the first time I’ve said that about cigar smoke. Fig! The fruit/vanilla is fig…or at least fig cookie-like to my pedestrian palate. The subtle milk chocolate is gone and replaced by a note of wood. The subtle changes in this first third have me on my toes. The chocolate returns, in what seems to be a tango with the woody note. The fig/vanilla flavor remains the shining star as the black pepper begins to let up a bit. The first third is a very slow burn. The ash falls and retains most of its shape, but is on the flaky side. 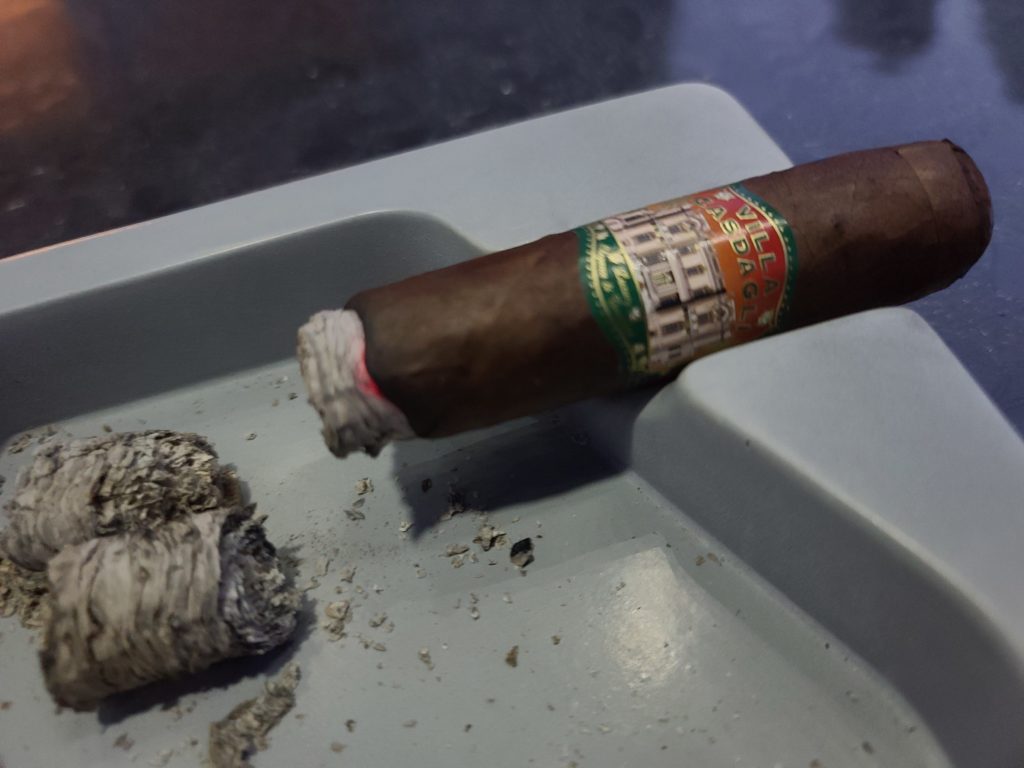 Baking spices begin to find their way through as the dominant sweetness lets off the throttle. This cigar has gone from medium plus to medium to start the second third. Coffee breaks through the sweetness with a slight bitterness on the backend, but still sweetness on the front. The ash seems more compact in this third than the initial. The wood note is back to accompany the coffee and sweetness. The tanginess of the first third is gone, as is the black pepper, but this still has a medium plus profile and is full of flavor. It is, in fact, a wall of flavor that never lets up. Instead, it ebbs and flows, allowing for more subtle flavors to be picked up. Case in point, the nuttiness is blending well with the coffee flavor, while the sweetness ebbs ever so slightly. I am savoring this experience, perhaps too much, as that would account fir the slight waviness of the burn line. The smoke is creamier than in the first third and is coating my mouth with a pleasant mouthfeel. Coffee begins to turn into espresso and walks hand in hand with an nice umami flavor, right to the forefront. The sweetness remains but is now a secondary player. The Villa Casdagli is good. Really good. As the second third begins to wind down the sweetness becomes deeper and more complex. The fruity tang from the first third is completely gone and you are left with a rich caramel note that pairs with the espresso and wood. The ash is holding well. The sun finally sets past the horizon as I gently break the ash. 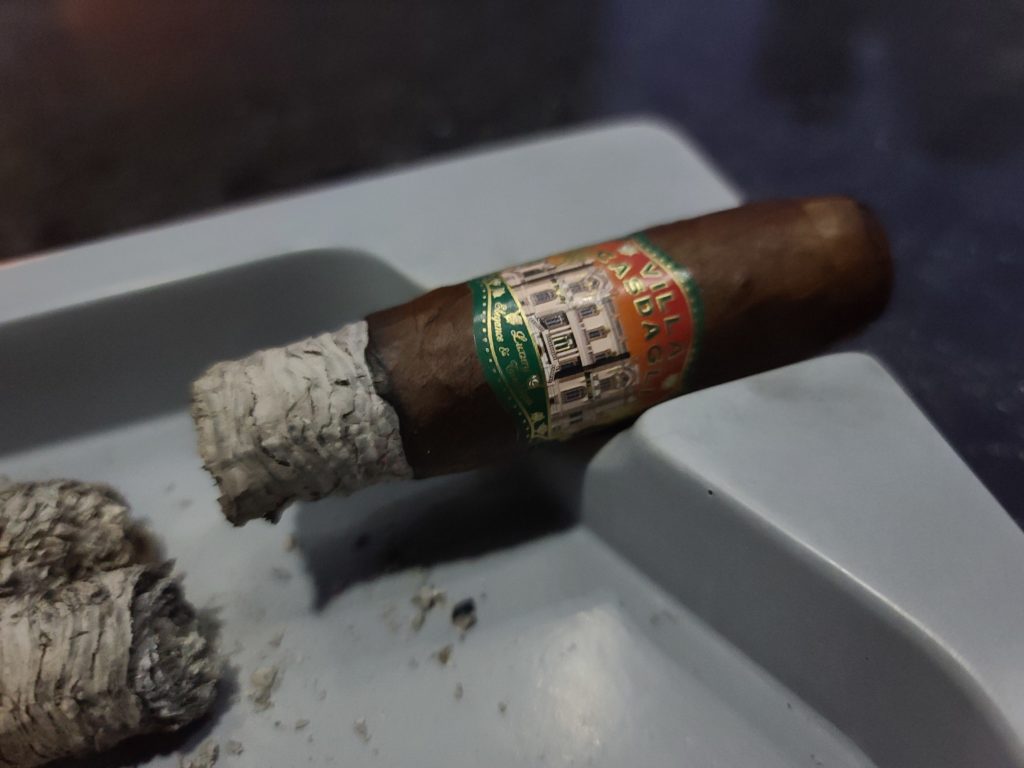 The burn line has been consistently wavy, but has caused no major issues or needed touching up to this point. Baking spices on the retrohale make for a pleasant beginning to this final third. Orange zest, salted caramel, and milk chocolate begin the final third. There is still an umami quality to it. It is a rich, savory note that binds the Villa Casdagli together. A wood note once again weaves in and out, but it is a bit more bitter than before. This is definitely medium plus to full flavored. But what started out bold and daring has melted into a nuanced and complex smoking experience. The espresso note has become the undercurrent, barely detectable on the back end. The burn line is now razor sharp and all is right with the world. White pepper stings oh-so-good on the retrohale. The nuance and subtleties do not fade away as the flavor ramps up to full in this final third. The charred wood becomes the dominant note, while the sweetness rounds out the rough edges nicely.

FLAVOR PROGRESSION
The sweetness that was present since the beginning, starting as a tangy fruity/vanilla note and ending as a rich salted caramel, has been the backbone of the Villa Casdagli. It performed the heavy lifting and allowed the other flavors to shine through and add their signature voices to this wall of flavor.

BURN EXPERIENCE
The burn was never an issue, as no touchups or relights were necessary. The burn line was wavy throughout, but finally burned razor sharp in the final third. The ash was compact in the final two thirds, with only the initial third being a bit on the flakey side. 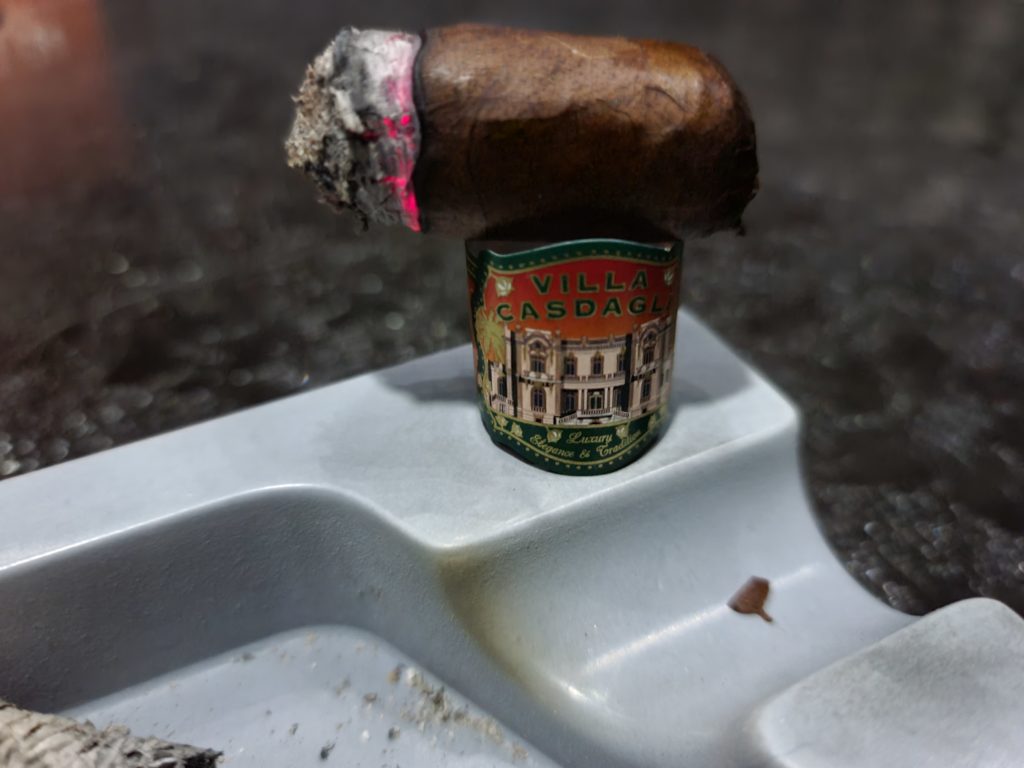 WORTHY OF ITS HERITAGE.