Every year, and the day before the Rocky Mountain Cigar Fest, Nick Melillo holds a Foundation event at a cigar lounge in the Denver, CO area. This year, it was at The Smoking Cave in Highlands Ranch, CO. The event also served as the launch party for Foundation’s newest release, the Olmec. I was lucky enough to be in attendance for the event, and was able to snag a box of the Olmec Claro Toro. Truth be told, I wanted a box of the Maduro but they had already sold out…so I settled for the Claro. Both feature a San Andrés wrapper, so was I really missing out?

For those of us who are unfamiliar with the Olmecs, Nick Melillo has us covered. According to a press release, “The Olmecs are the early Americas’ the most mysterious and ancient civilization. The Olmecs pre-date the Mayans and Aztecs and are considered the ‘Mother Culture’ of Mesoamerica.” The press release also states, “The Heart Land of the Olmecs is the tropical lowlands of modern-day Mexican states of Veracruz, Tobasco, and San Andrés Tuxtla.” This is where the San Andrés wrapper is grown. The tobacco used in the Olmecs use a special fermentation process. 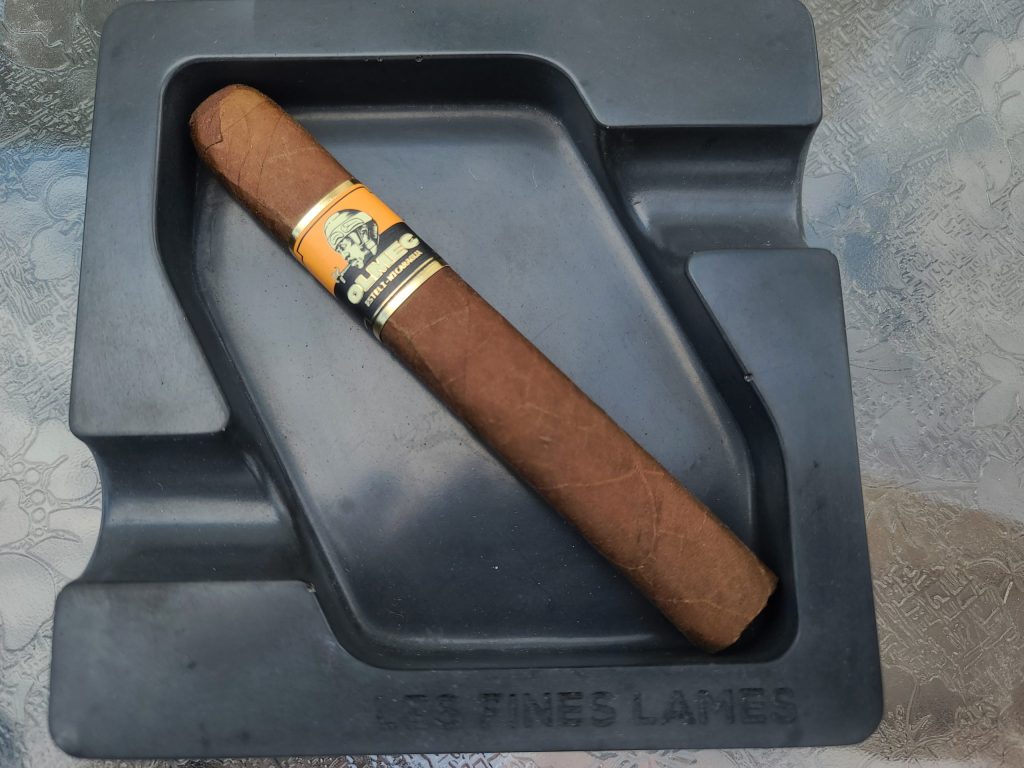 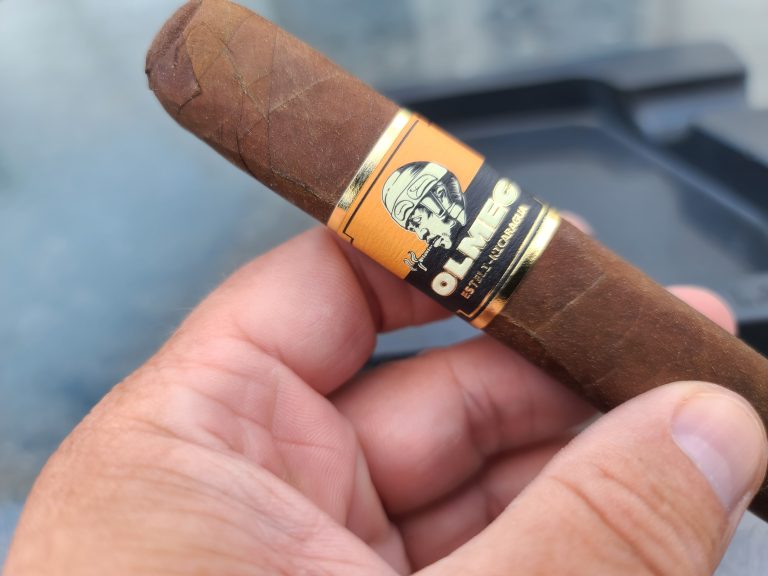 The band two-toned orange/yellow and black with gold accents. It features an artist’s interpretation of an Olmec head (based on colossal stone heads sculpted by the Olmecs) smoking a cigar. The back of the band features the Foundation logo. 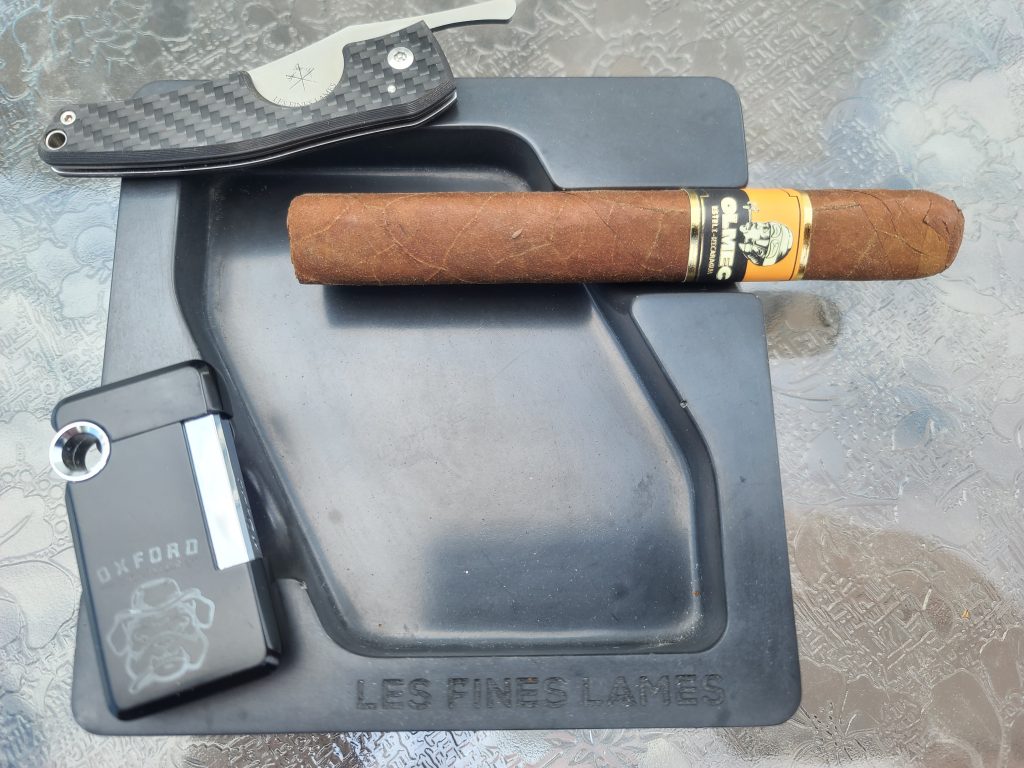 The San Andrés Claro wrapper feels like fine grit sandpaper…not exactly smooth, but not exactly rough, either. It is a toothy thing and has a rustic look to it. The shoulder overlaps and the Olmec is single capped. There are numerous veins that add to the character of the cigar. It is a thing of beauty in its own right. 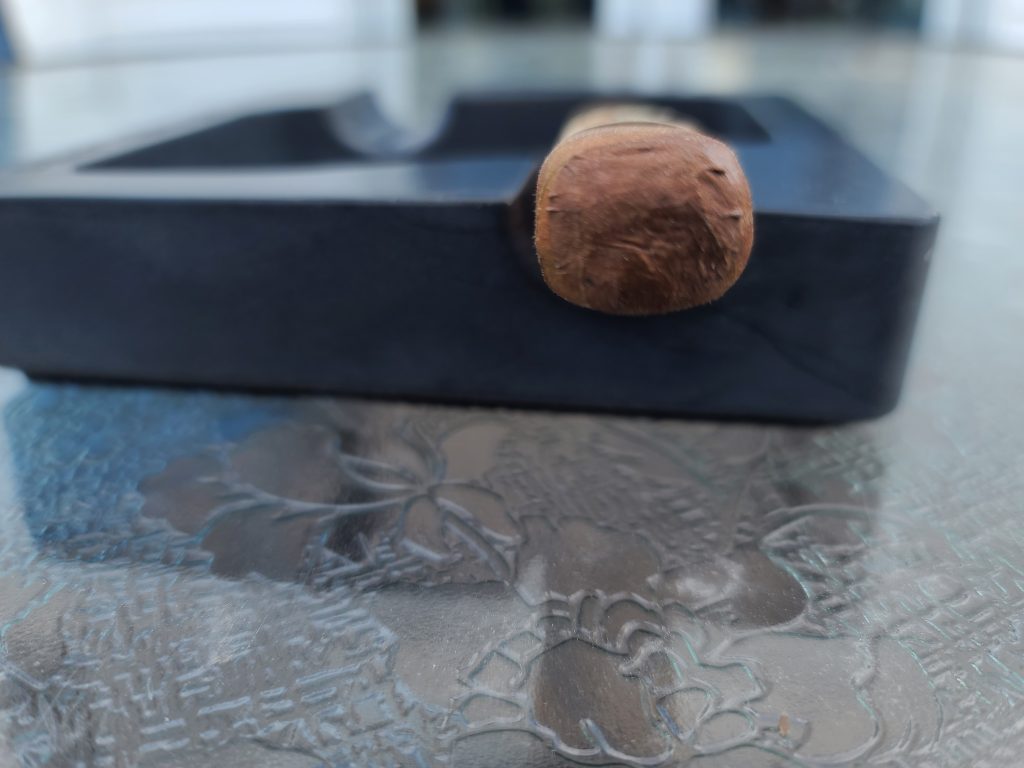 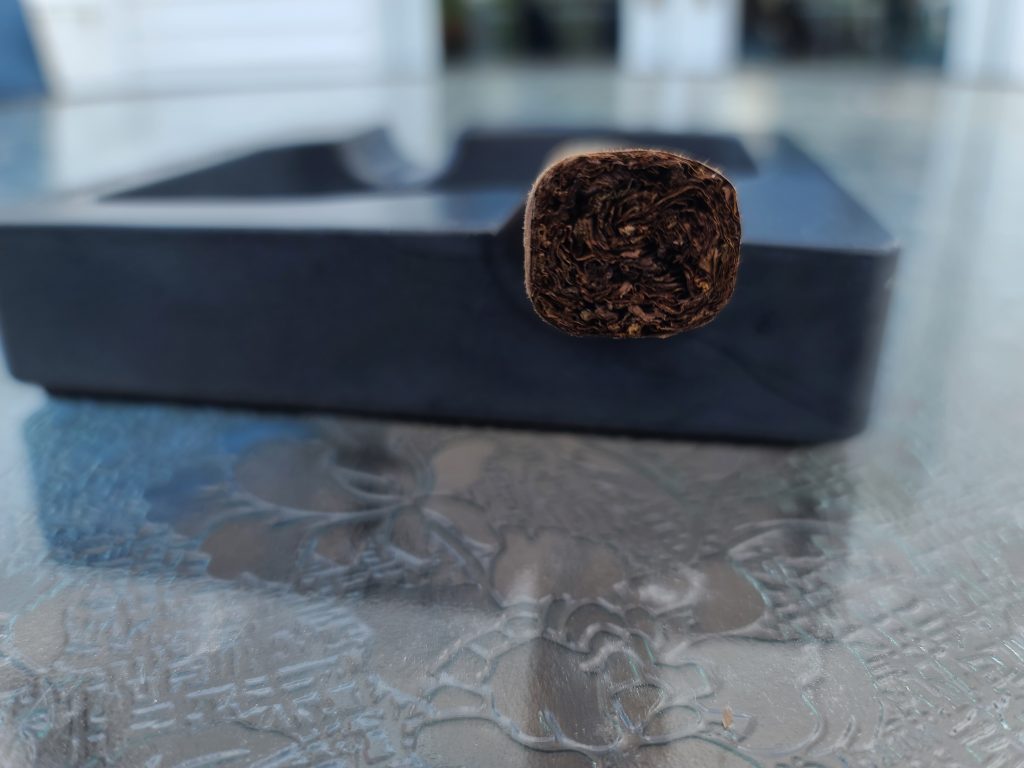 The wrapper is straight up barnyard. There might be a flat, musty-like fruitiness, but it is buried underneath barnyard. The foot reminds me of freshly cut grass. The fruitiness from the wrapper comes through more easily in the foot.

The cold draw has a sweetness that comes through and lingers on my palate. It is a delicate flavor that is subtle and sweet. It is accompanied by a sour wood note that forms a nice juxtaposition to the sweetness. 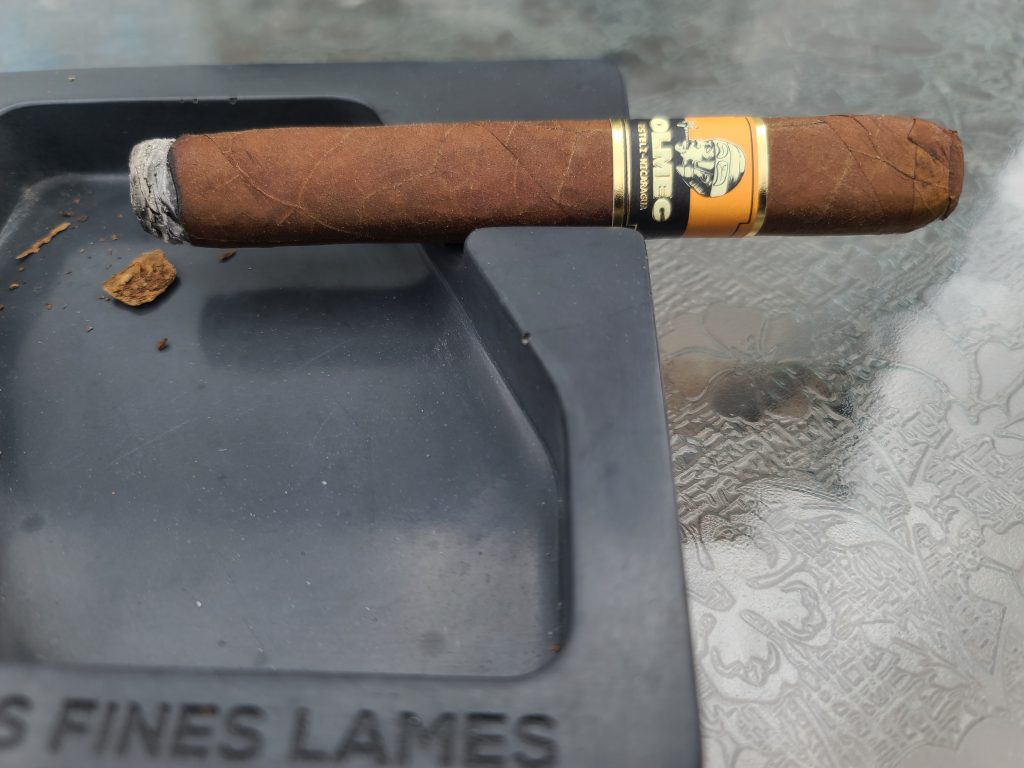 The initial light reveals big notes of earth, coffee, and campfire. The retrohale is black pepper. There are spicy undertones and a nice sweetness that lingers on my palate. There is a note of yeast or bread that begins to come through, but seems to quickly fade.

The smoke is thick and silky smooth. I could almost chew it. It fills my palate without leaving a film on my palate. 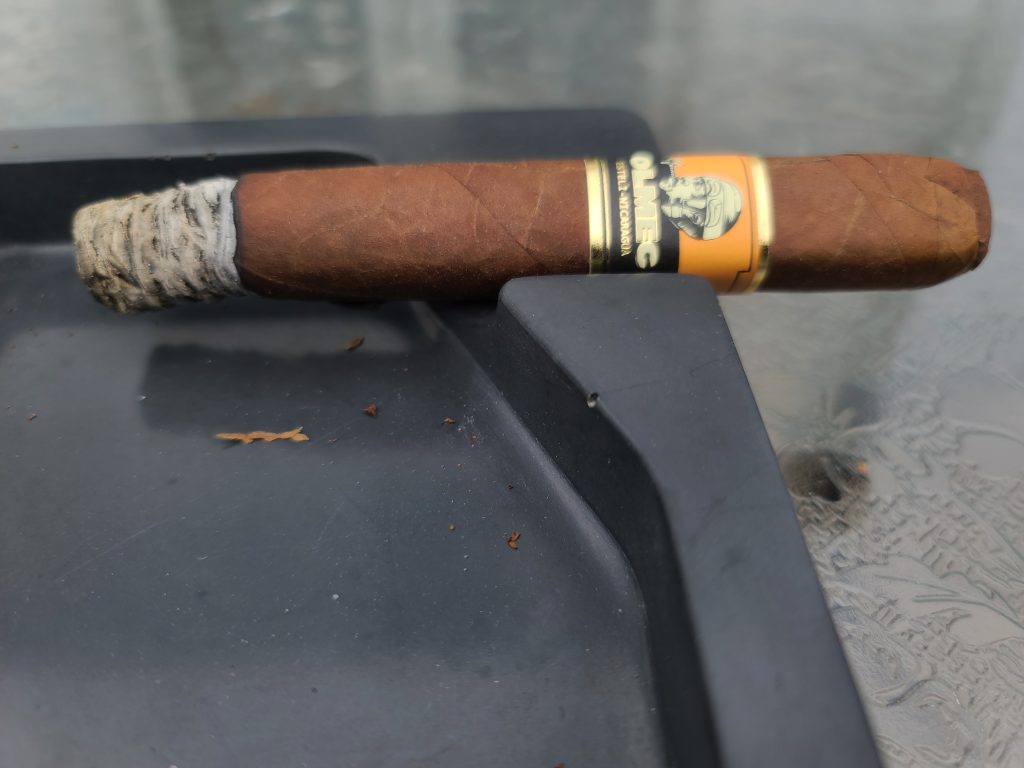 The campfire note fades with the initial light. The first third then begins with a funky sweetness and notes of citrus and damp wood. There is a peanut note that comes through, too. Black pepper rules the retrohale. The burn line is even and the ash compact. Avocado oil helps smooth out the flavor profile. Baking spices and a sweet citrus note linger on my palate. A coffee note morphs from the damp wood note, adding some complexity to this first third. The Olmec Claro is full bodied but medium strength. I deposit the ash in the tray. Black pepper, baking spices, coffee, and now an herbaceousness really brings the Olmec Claro to life. 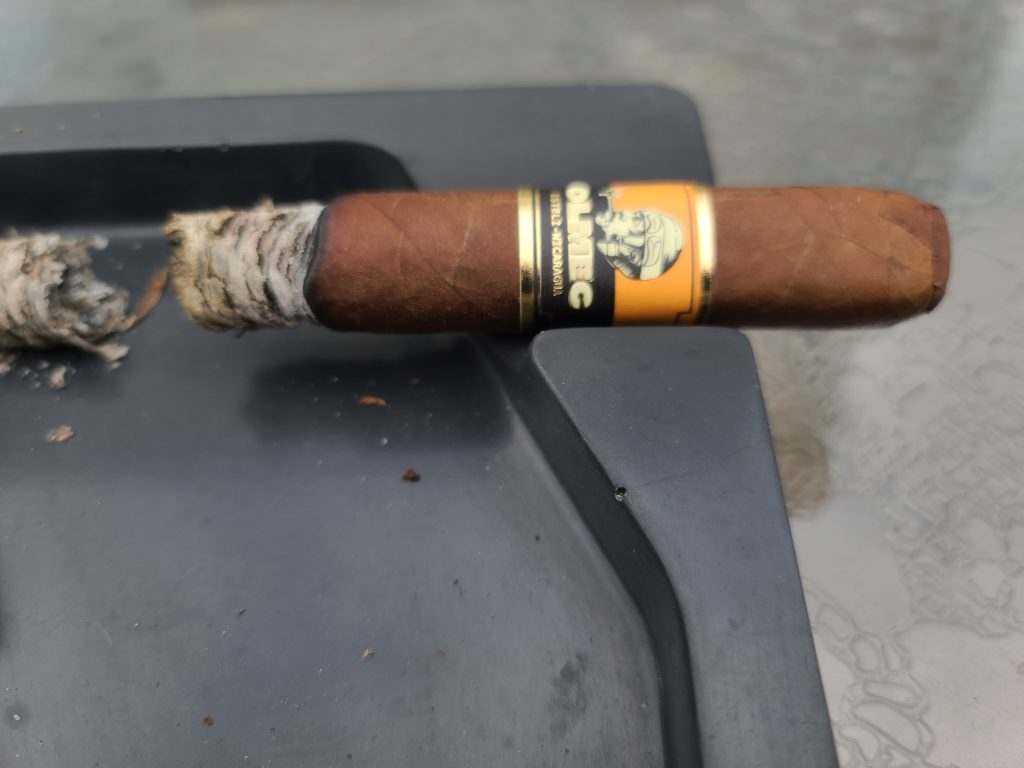 The second third turns down some of the musty notes from the first third and really brings the flavors into focus: salted nuts, cream, chocolate, a hint of leather, and white pepper and baking spices on the retrohale. The Olmec Claro begins to burn a little uneven, but not enough to cause concern. The ash is still compact and beautiful. Orange peel and chocolate. It works…well. There is still notes of wood, butter, and coffee, but they are firmly in the background. The middle third has become a much smoother experience than the initial third. There is also an underlying sweetness that has remained constant since the initial light. 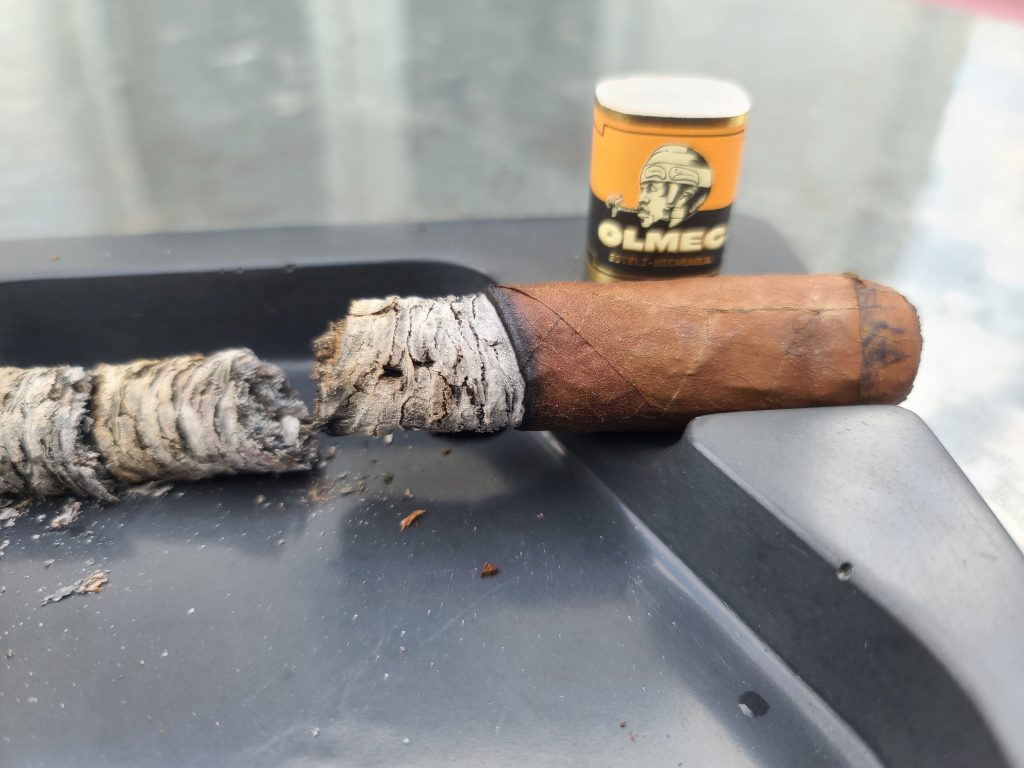 The final third of the Olmec Claro begins with a very smooth black pepper on the retrohale. Charred wood, espresso, and burnt toast with butter from the initial light come back in more balanced proportions. Baking spices find their way into the profile, too. The final two-thirds seem more balanced than the first third. This final third has ramped up a bit, but nothing overwhelming. The ash has been consistently compact; a testament to how well the Olmec Claro is constructed. The burn remains slightly uneven. Cedar, butter and espresso now. This final third is amazingly smooth and flavorful.

The Olmec Claro is more medium than full, but does have its moments of being full-bodied. The Olmec Claro starts off with a strong notes like campfire and coffee but mellows out a bit and finds its footing. Creamy notes of peanuts, butter, coffee, chocolate, and citrus all meld together and intertwine to pull each third into the next. None of the flavors seem out of place or too overpowering. In fact, it’s all blended together really well and feels very well balanced.

The only issue was a bit of wavy-ness every now and again. It was just barely uneven during the final third, but nothing that ever required a touch-up or relight. The Olmec Claro is a very well constructed cigar. 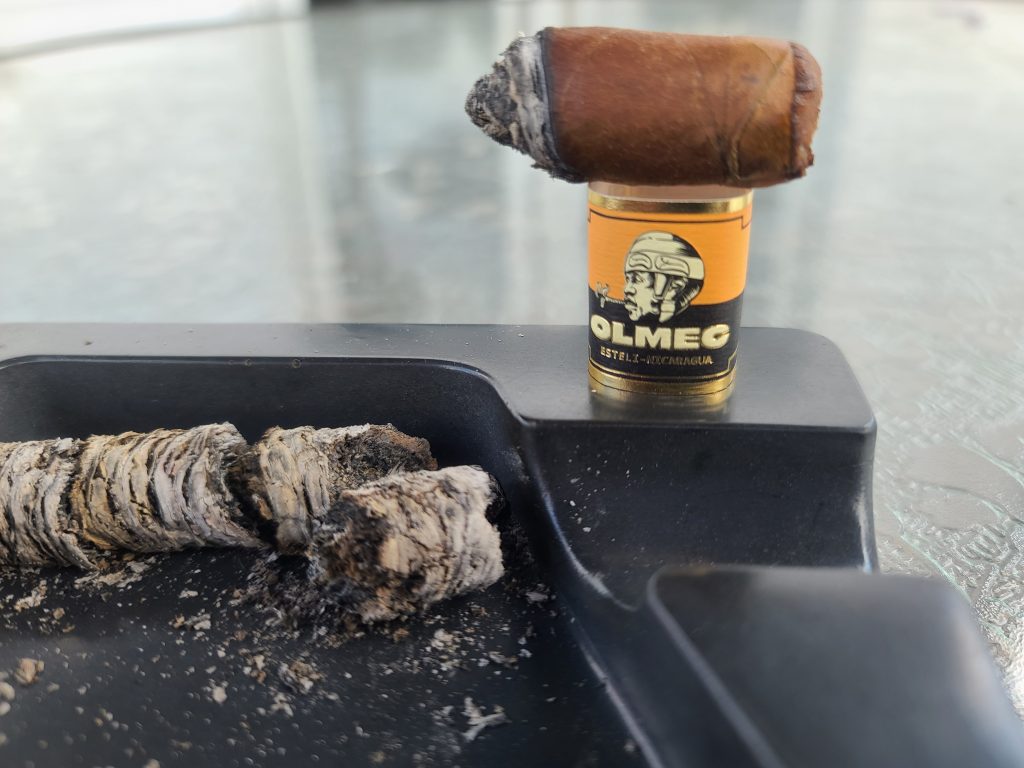 A CIGAR WORTHY OF THE HISTORY BEHIND ITS NAME.

To paraphrase a famous line from Game of Thrones, “Nick Melillo knows things and smokes cigars.” To be more accurate, Nick knows his history and how to blend cigars. The term “Master Blender” is a moniker that most in the industry hate, but whether he hates it or not, Nick is deserving of it. The Olmec Claro is just the latest example of that. It is a medium to full cigar experience that never overpowers your palate, but delivers a smooth and tasty treat. Do yourself a favor and grab a box of these!