Cigar Review: The Juan Lopez Selección No. 2 Underwhelms Without Age

In the world of Cuban robustos, there are plenty of names that stand out, but one that is often overlooked is the Juan Lopez Selección No. 2. The Juan Lopez brand as a whole is one that gets little attention in the cigar community, to the benefit of those who know what the brand is all about.  Juan Lopez is one of the original legacy brands in Cuba, first seeing production in 1876. The brand remained owned and operated by the Sena family until it was sold in 1918. After the revolution in 1960, like most industry on the island, the farmland and factory were both taken over by the Cuban government.

The original blend portfolio consisted of ten different vitolas, most of them ending production in the 1970s and a few in the later 2000s. Since then, Habanos S.A. has slimmed the Juan Lopez macra to only two regular production vitolas (excluding a possible LCDH announced in 2020), focusing more on regional releases. This box is from 2020 and has been in my humidor for just over two months, resting at 67 degrees and 65 relative humidity.

WHERE:
My backyard patio

WHEN:
Each one was smoked in the AM

WHAT’S ON:
Listening to a podcast 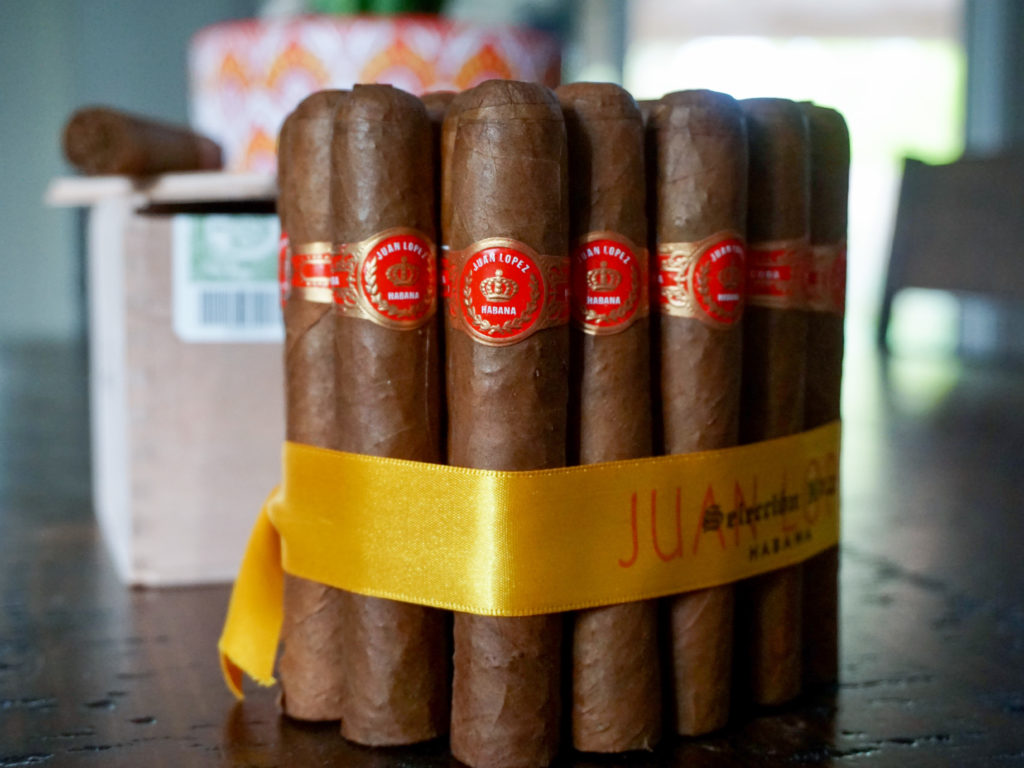 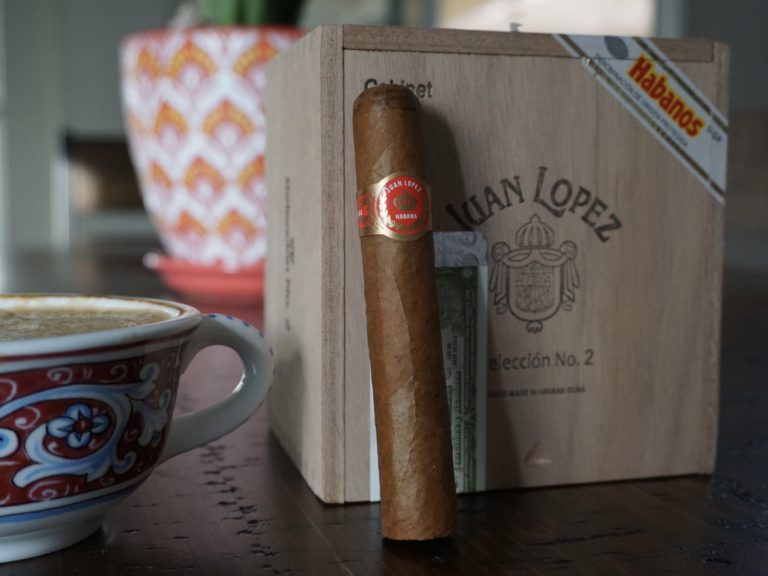 The design for this band has been roughly the same since pre-1960, adding some unique character and heritage. The background of the band is a vibrant red, not to be confused with the deep reds you find in the Romeo branding. The edges of the band are embossed and trimmed in a grainy gold ink. Inside each of the shoulders of the band are two diagram boxes: one on each side and trimmed with the same gold ink. The left diagram box has the country of origin, Cuba, in white ink. The right side has Habana printed in the same white ink. Centered on the band is an oval ring, surrounding a laurel wreath and crown, all embossed and printed in gold ink. Above the crown is the brand name, Juan Lopez, and below the wreath is Habana, both in white ink. 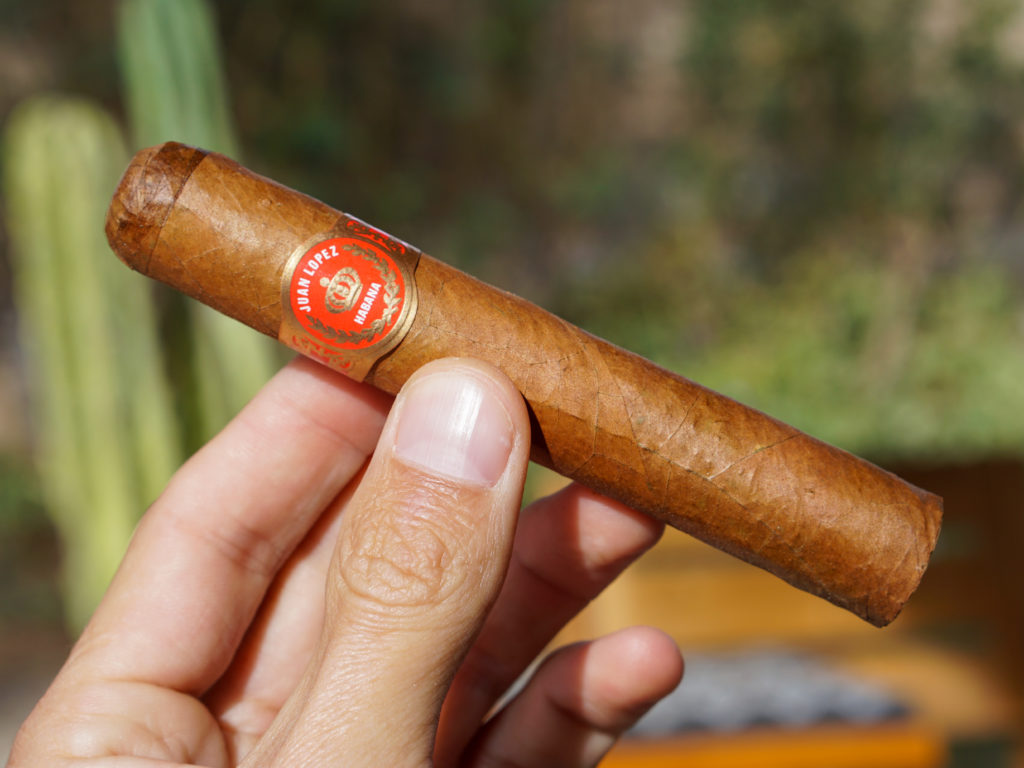 CONSTRUCTION
The construction is a tad on the rustic side. The wrapper has noticeable veins and seams running up toward the cap. The pack is firm and only one of the cigars reviewed had any soft or lightly packed spots. The cap is a triple cap construction that had no issues after cutting. 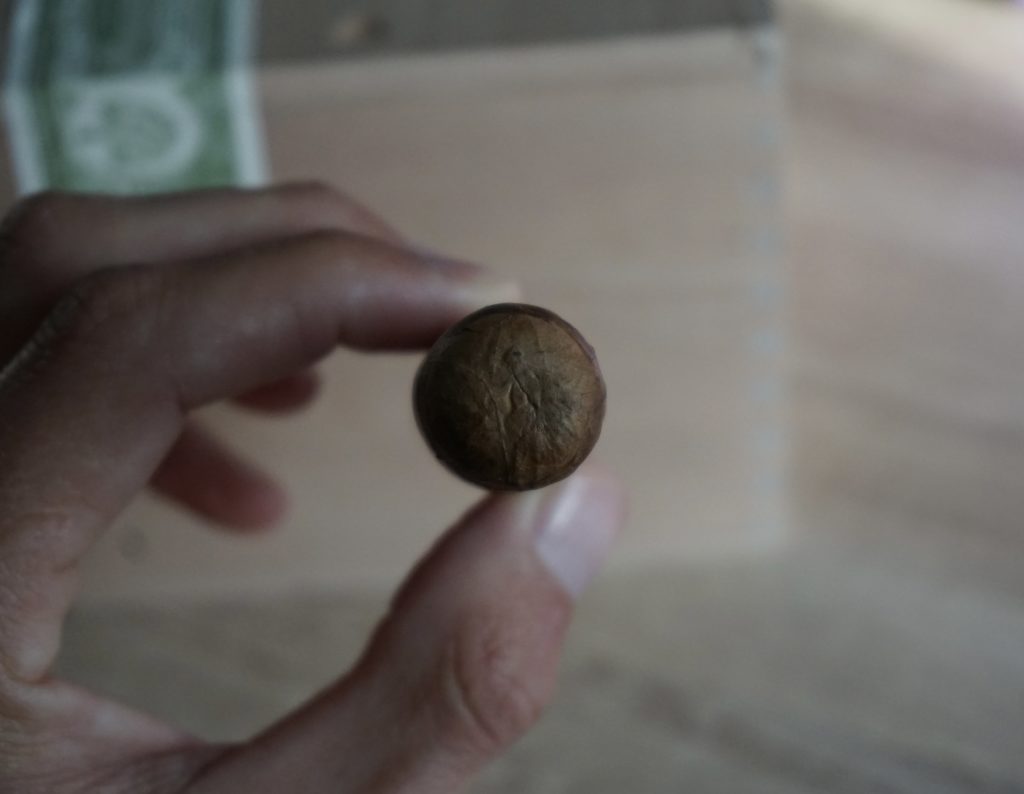 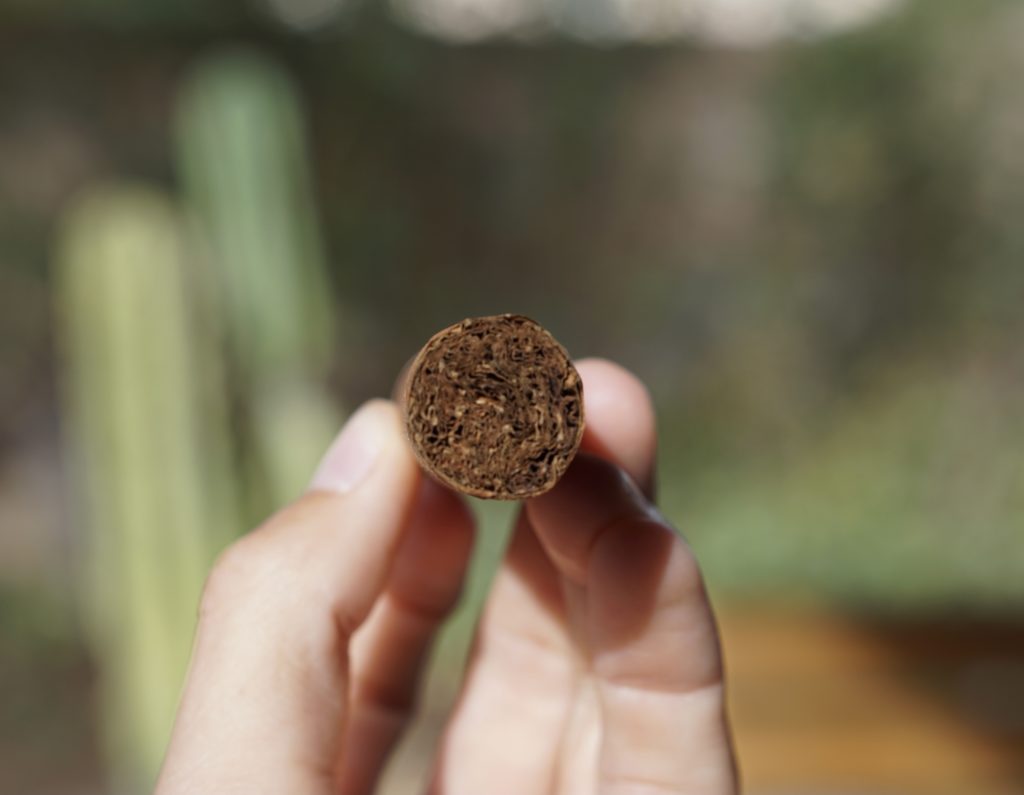 AROMA
There isn’t a complex aroma coming from this cigar. The wrapper has the typical Cuban dry hay with some additional soft cedar. The foot has the same dry hay, subtle cedar but with an additional honey sweetness. All these scents help to build a foundation for the type of experience you are going to have with this cigar: subtle but reliable. 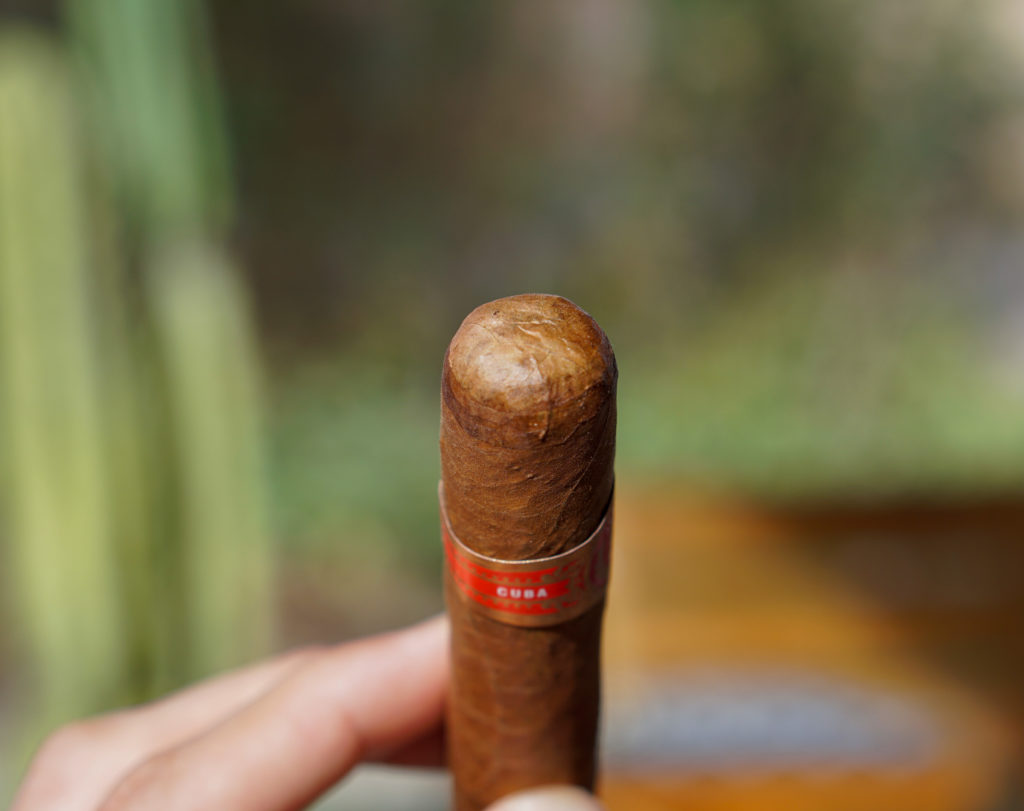 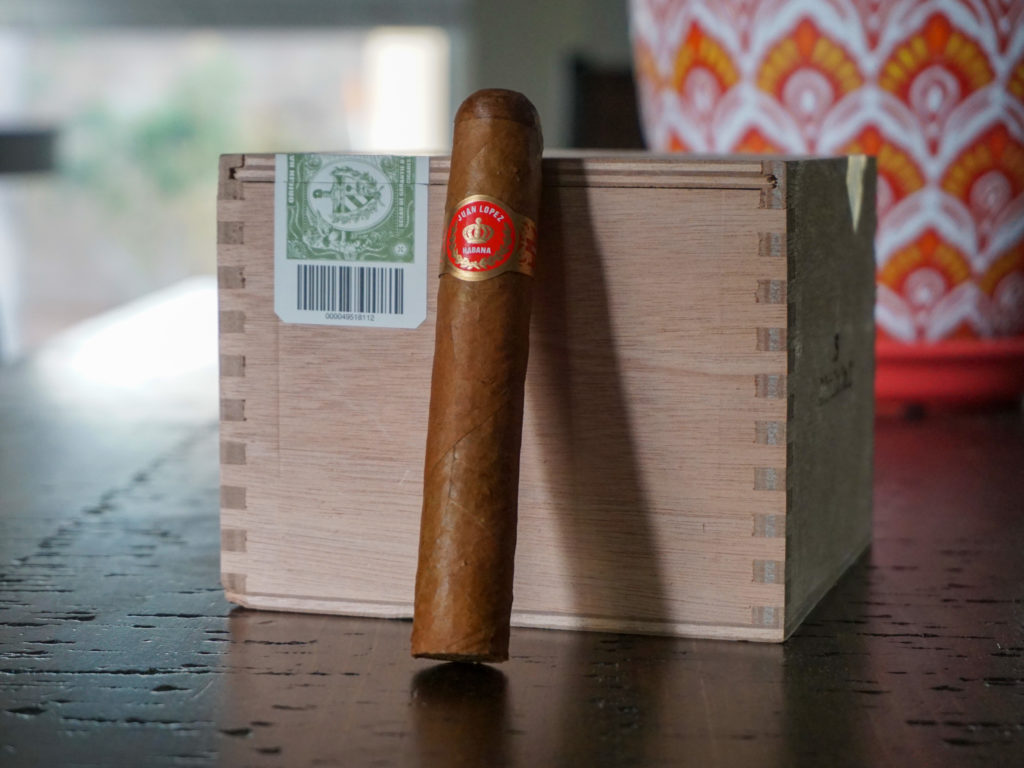 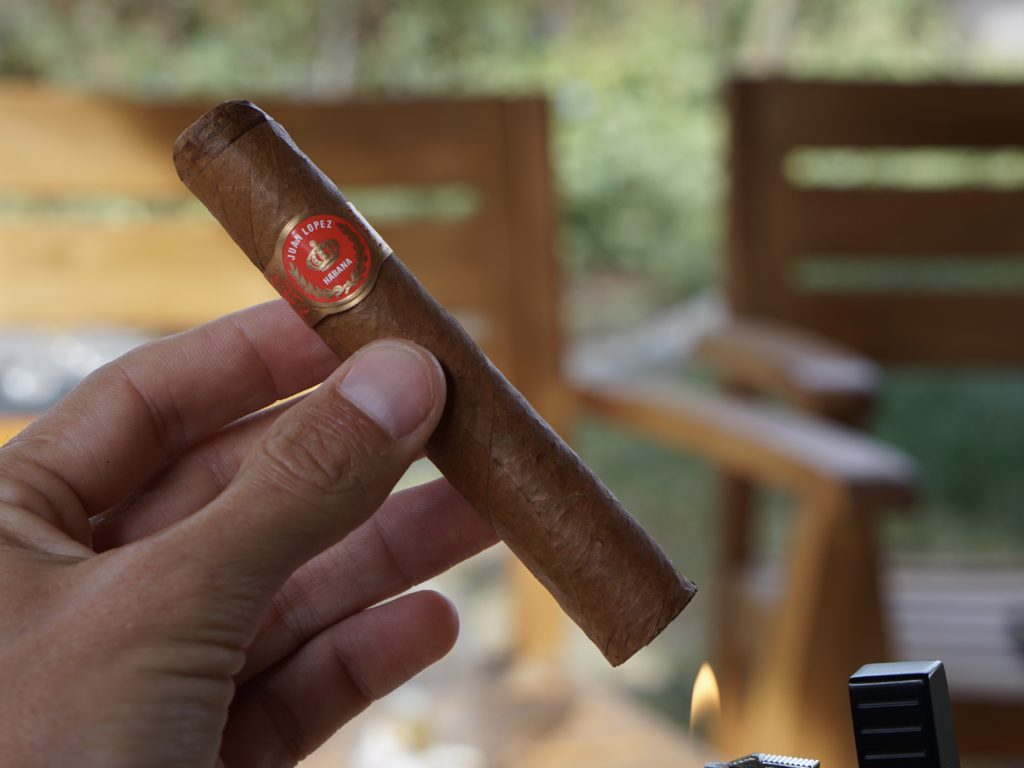 LIGHT & DRAW
Cut:  Guillotine
Fire:  Soft Flame
The toast and lighting of the cigar went as would be expected: toasted evenly with no weird burn or dipping. The draw is a tad on the snug side, but it seems like it may open with some heat. 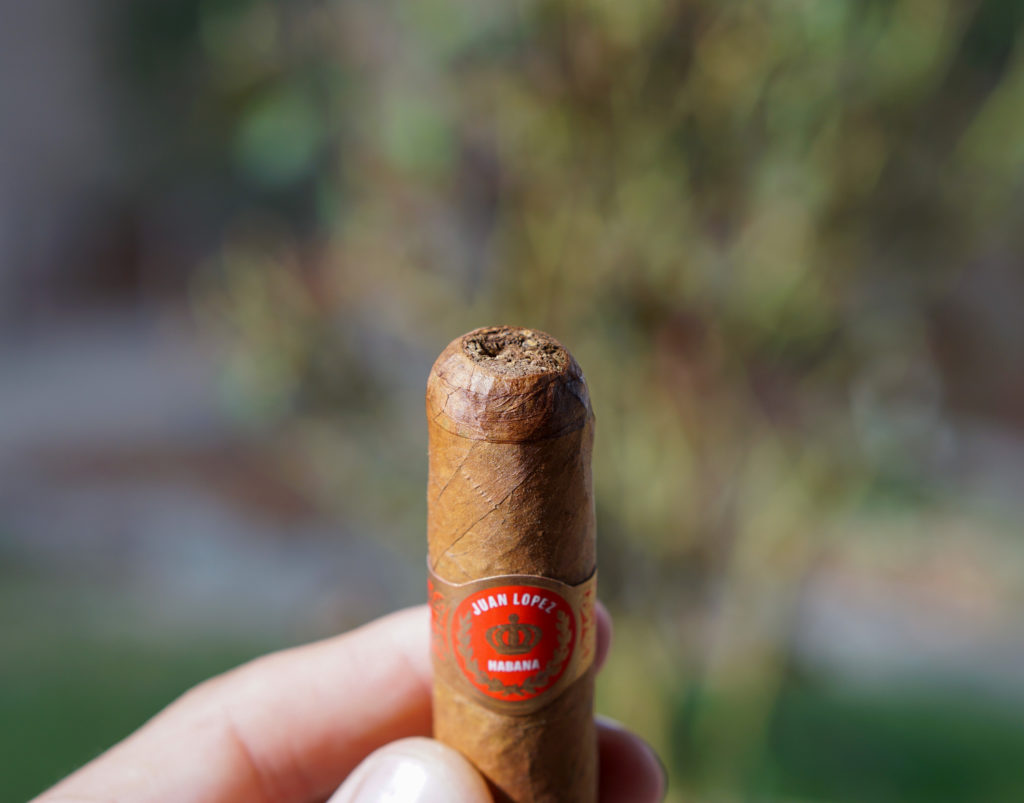 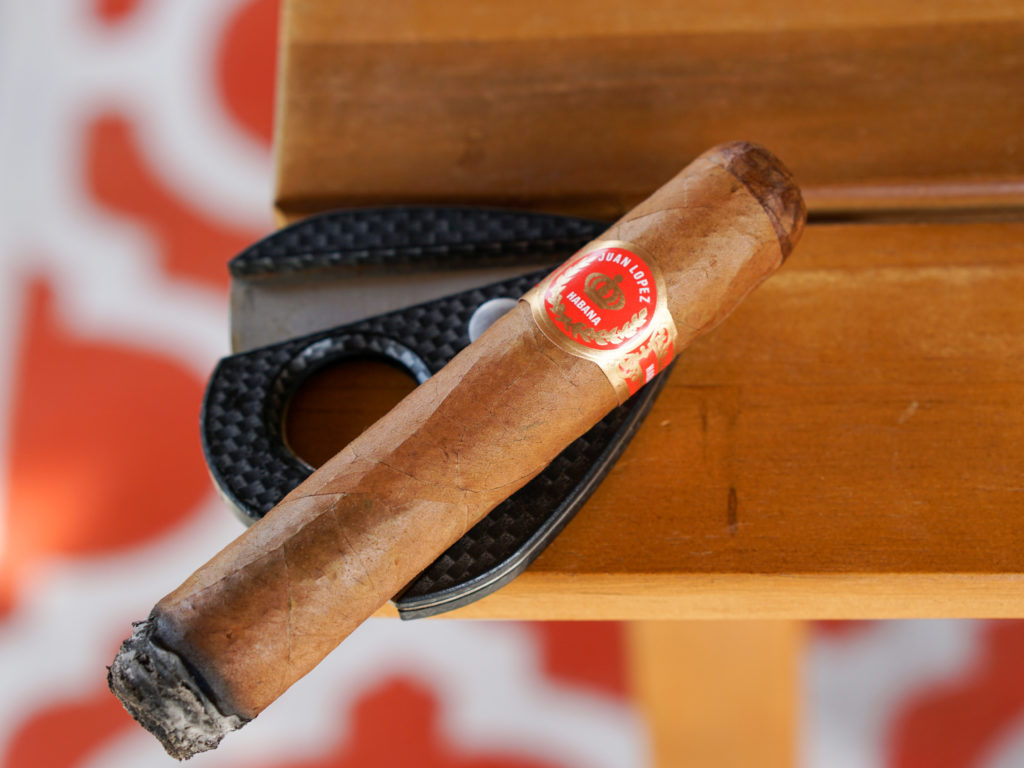 SMOKE
There isn’t much to rave about with the smoke from the No. 2. The majority of the cigar had a very wispy, mild smoke that leaves the smoker wanting. There is a slight butteriness that shows up halfway through the cigar that helps balance out some of the dryness. 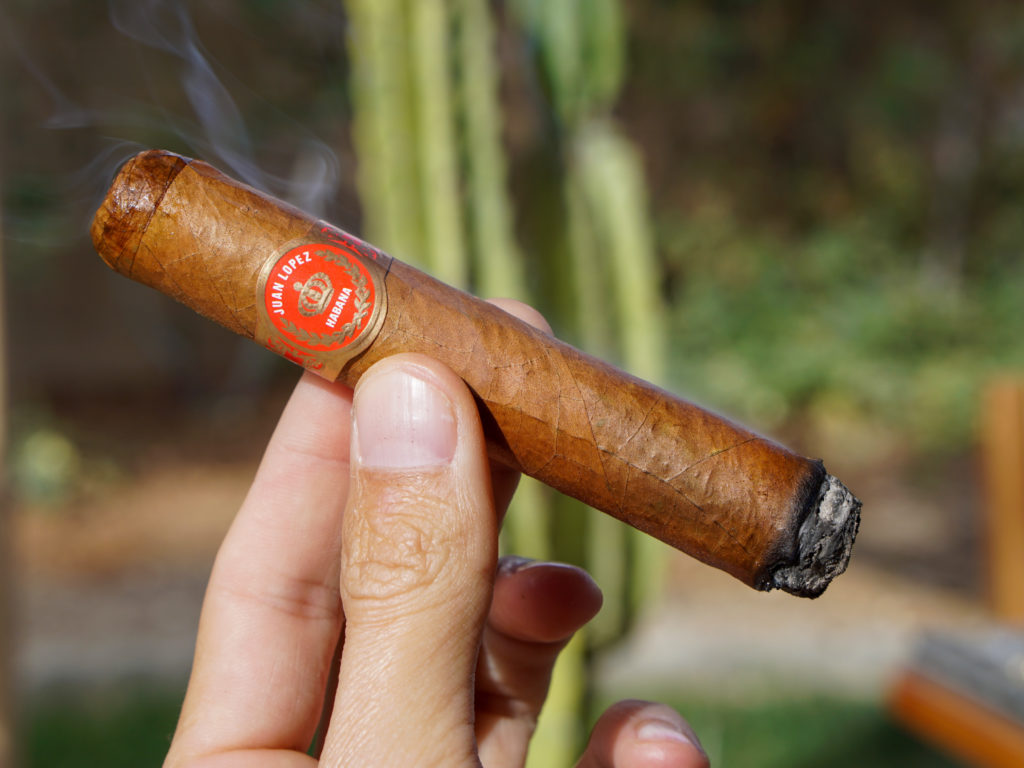 The first few centimeters are a bit rough; there is an overwhelming flavor of campfire ash and ammonia. The ash and ammonia fade out roughly a half inch into the cigar, but there is a bit of ash on the aftertaste that lingers. The profile does begin to open after the one inch mark. There is a hint of damp earth–think of digging around the garden just after the rain. Once you get past some of the earthy notes, there are nice coffee and cream notes that cling to the palate. The retrohale has some citrus zest and black coffee with little to no pepper. This cigar also has a very dry profile, so make sure you have some libations on hand. 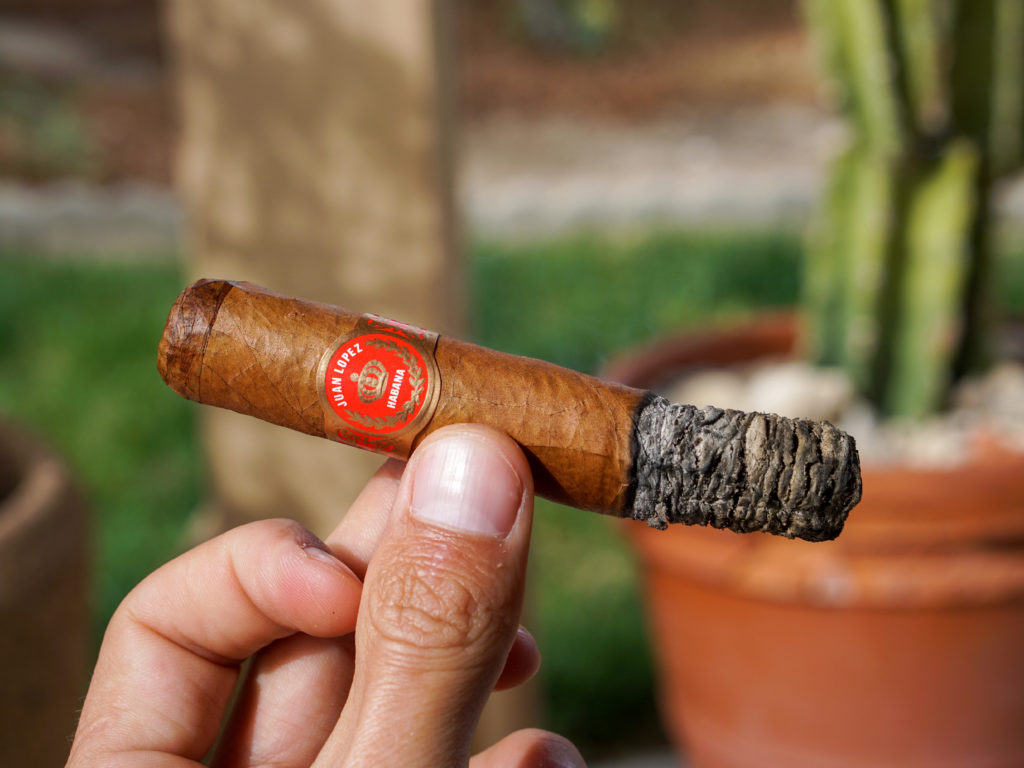 There hasn’t been much in the way of transitions moving into the middle third. The majority of the flavors coming through are still black coffee, and cream with an added hint of candied fruit. Even with the subtle changes, the black coffee notes are overly dominating, and it is a struggle trying to find any of the other flavors. The retrohale has taken on more of creamy texture with a nice floral and baking spice quality. This is still a very dry cigar smoking experience; pairing this cigar with dark chocolate may help counteract the dryness. 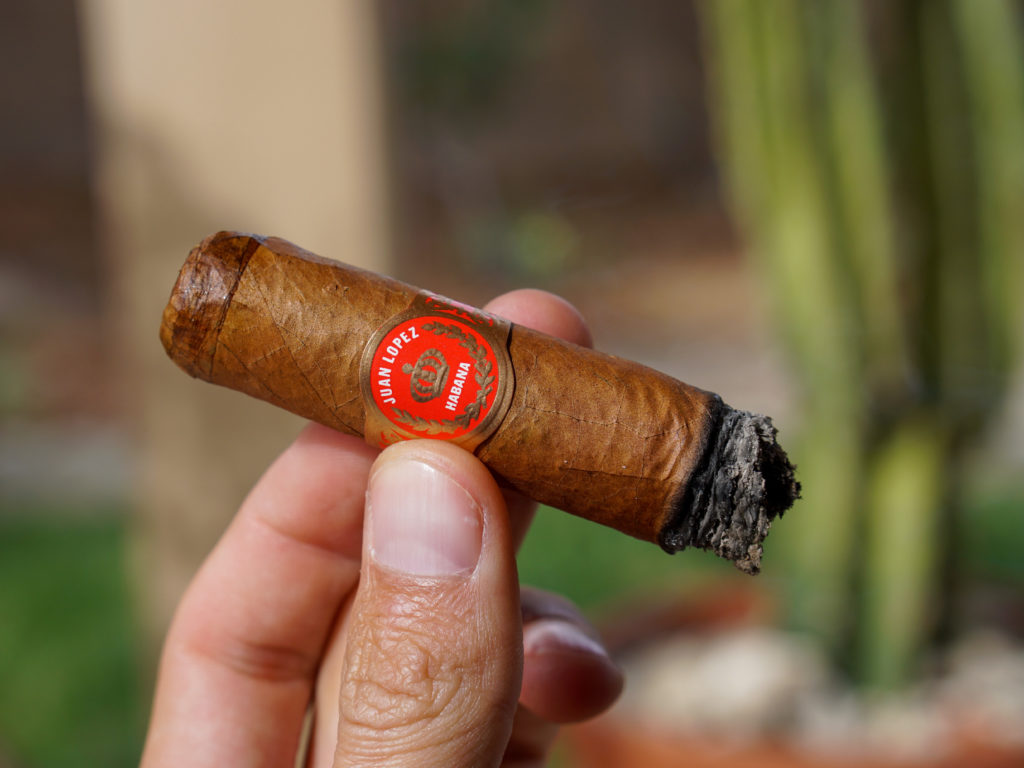 The last third follows in the same vein as the previous thirds: lots of coffee and cream notes with hints of fruit, cedar, and citrus peppered throughout. The Cuban twang was more pronounced in the last third. This may have been the driest section of the entire smoking experience. The retrohale is unchanged from the second half of the cigar: cream, floral notes, and baking spices.

BURN EXPERIENCE
The burn was perfect the entire length of the cigar. Ash line was razor sharp and fell in solid chunks without flaking. The draw was even throughout the entire cigar. 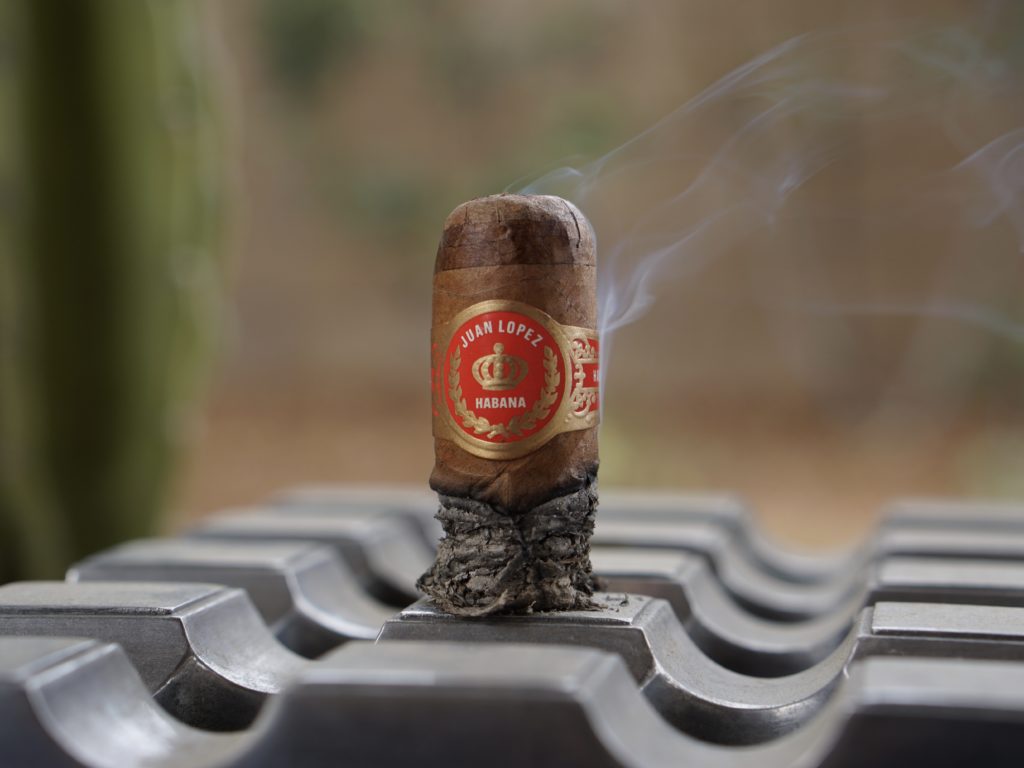 While I love this cigar with a few years of age, this is not a brand that I would smoke straight off the rolling table. As much as I enjoy a cigar and water, this is a cigar begs for a more involved pairing. The No. 2 pairs perfectly with a well made cappuccino or latte, sweet cocktail (I would suggest a mojito), or a higher percentage cacao dark chocolate. However, if you are the person who enjoys a very dry and woody cigar, this will be in your wheelhouse. With all that said, if you can wait, you are in for a treat. After a few years, the wood notes mellow out, giving way to the fermented fruit that gets over powered in their younger cigars.

2 comments on “Cigar Review: The Juan Lopez Selección No. 2 Underwhelms Without Age”