This particular cigar is from a box packaged in August of 2018, and it aged a little over one year before I purchased it in late 2019. After purchasing, I let them rest for several months at 63 percent relative humidity before reviewing.

SOURCE:
Generous gift from a friend

WHERE:
Open patio in my backyard

WEATHER:
Currently 71 Fahrenheit in the shade with almost no breeze. Humidity is hovering around 24 percent. Absolutely beautiful High Desert morning.

TOTAL PRODUCTION
Typical Box Size:  Boxes of 10 in tubes, Boxes of 25 in natural box (not in tubes)

VITOLA BREAKDOWN
o The Exhibiciòn No.4 is only produced in one vitola. The size name varies depending on where you do your research. Oftentimes, it’s referred to as a robusto, while others it is referred to as a corona extra. The factory name for this common vitola is known as the Hermoso No.4. 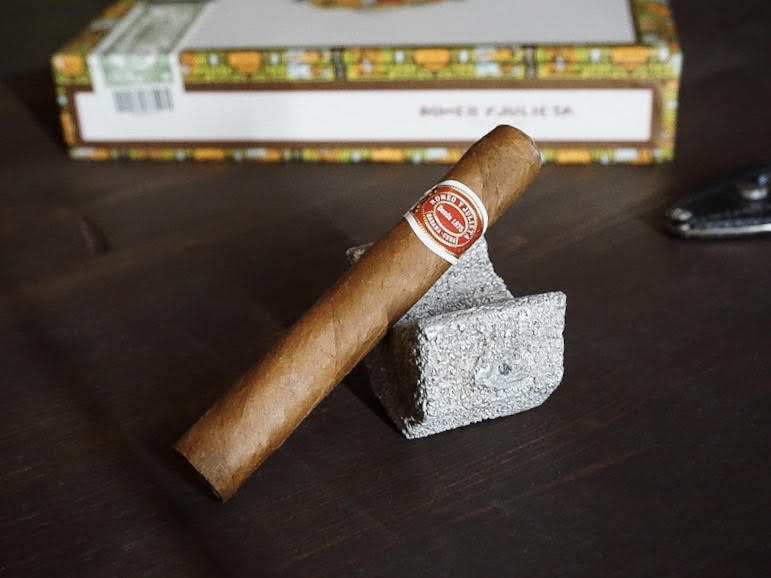 This iteration is sporting the newer (2008 – present) Romeo y Julieta band “D.” This is a small band with a white background and the vibrant Romeo y Julieta red matting. The red is lined with a guilted border, and reads “Romeo y Julieta” centered along with a script denoting the founding year  and country of origin. The center of the band is flanked by three golden medallions and some added filigree to balance out the negative spaces. 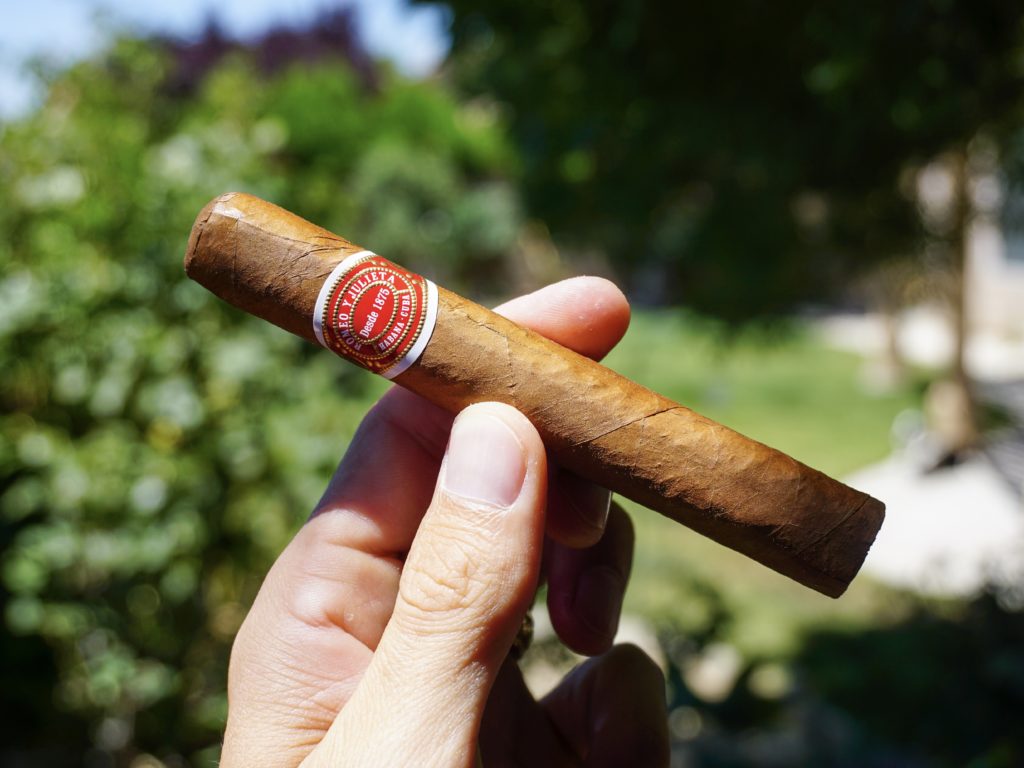 CONSTRUCTION
This is an absolutely beautifully rolled cigar. Topped with a smooth and even triple cap. Running down the body, there is an even and firm roll with no noticeable soft spots. The wrapper is a rusty  brown (Colorado Claro) with a slight sheen. Veins are minimal, and they disappear into the body under the right lighting; the foot seems well-packed. For such a small vitola, this cigar has some heft, keeping that balanced feel in your hand throughout your smoke. 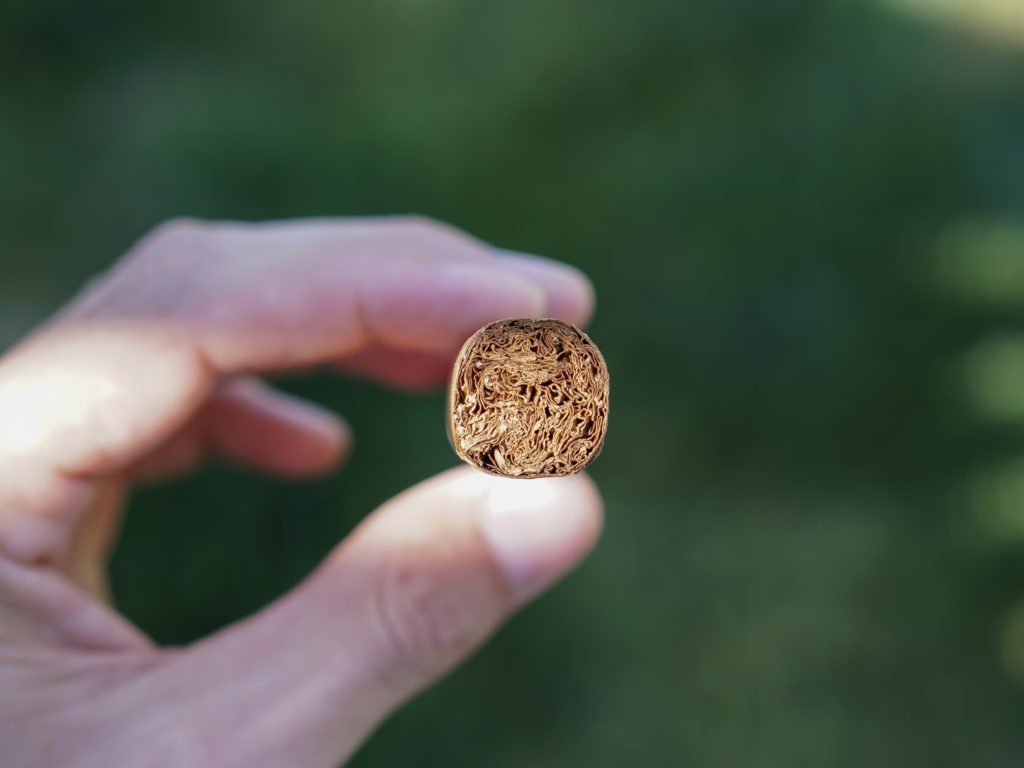 I love the accents of sweet golden hay that you get from this cigar. It has a very unique, fresh and robust note of dried hay and clean barnyard aromas, but that is it. Although it is a bit one-dimensional, it is enjoyable.

The draw on this particular cigar is wonderful; it has just the right amount of resistance. Some of the hay qualities carry over from the body aroma. But, the majority of the of the cold draw is dominated by cinnamon and rye bread.

The first puff is effortless, the burn is even, and the smoke is dense from the beginning. There is an almost copper-like, metallic quality to the first few puffs.

The smoke is almost chewy from the beginning, but the amount of smoke starts to dwindle after the first few puffs. The smoke aroma is very pleasant; it’s reminiscent of an old cigar shop full of nicotine coated leather chairs. 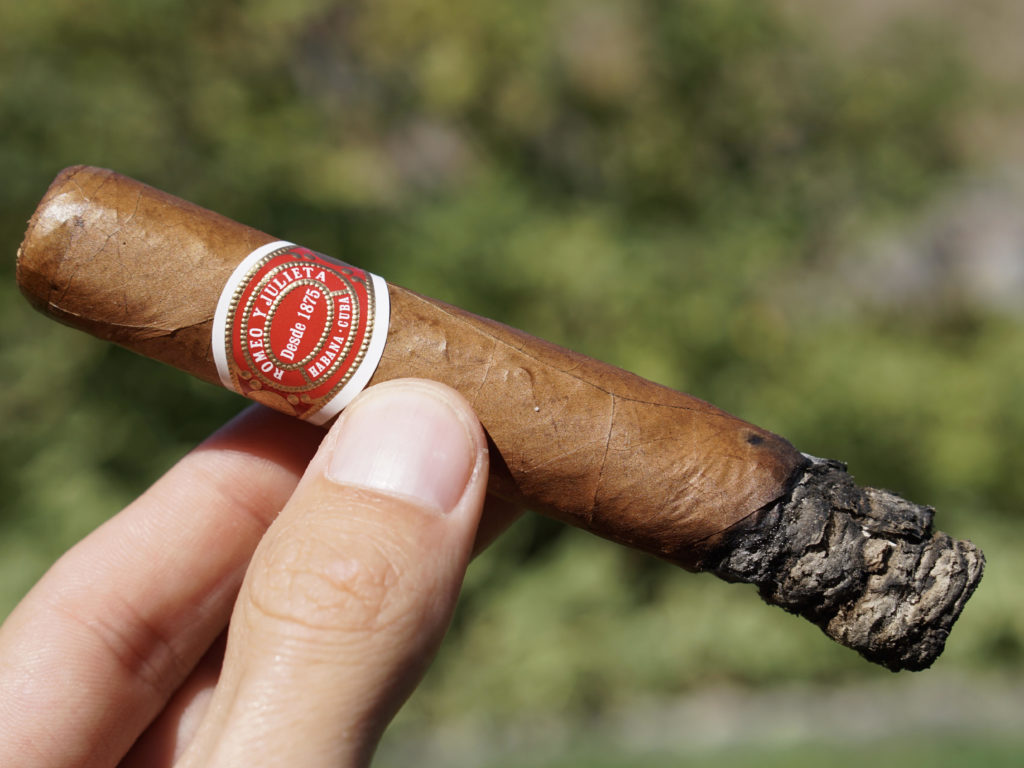 Unlike some of its counterparts in the Romeo y Julieta line-up, the Exhibiciòn No.4 starts out mild and approachable. There is a slight breadiness with hints of sweet dried fruit, but this soft profile soon begins to shift.

After you reach the half inch portion, all of the flavors seem to be kicked up a notch. You start to get more of the quintessential Romeo profile with thick milk chocolate, slightly sour cherry notes and hints of caramel. The retrohale is heavy cream and cedar with a slight black pepper tingle. 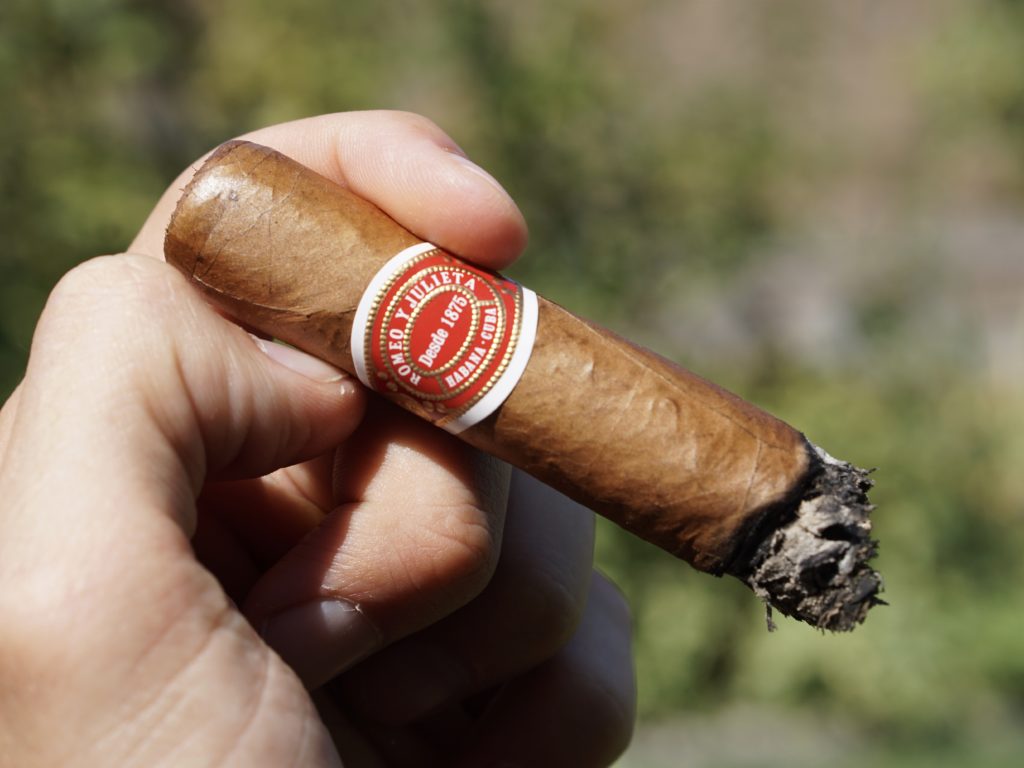 Transitioning into the second third, the cigar required a bit of a touch up. The ash has held in its entirety in the second third. There is a bit of flakiness to the ash which has made it a bit lackluster to me; other than the aesthetics, it is burning perfectly.

The body of the cigar slides back into the milder side of full, but the profile really shines in the second third. That archetypal flavor shows up in folds: thick milk chocolates, cherry amaretto and sweet honey dominate the palate. All aided by a very oily, velvety  dense smoke.

The ash finally fell off in a solid two-inch section at the middle of the second third. The ash is still quite flaky, but the burn has evened and is still producing a fair amount of smoke. 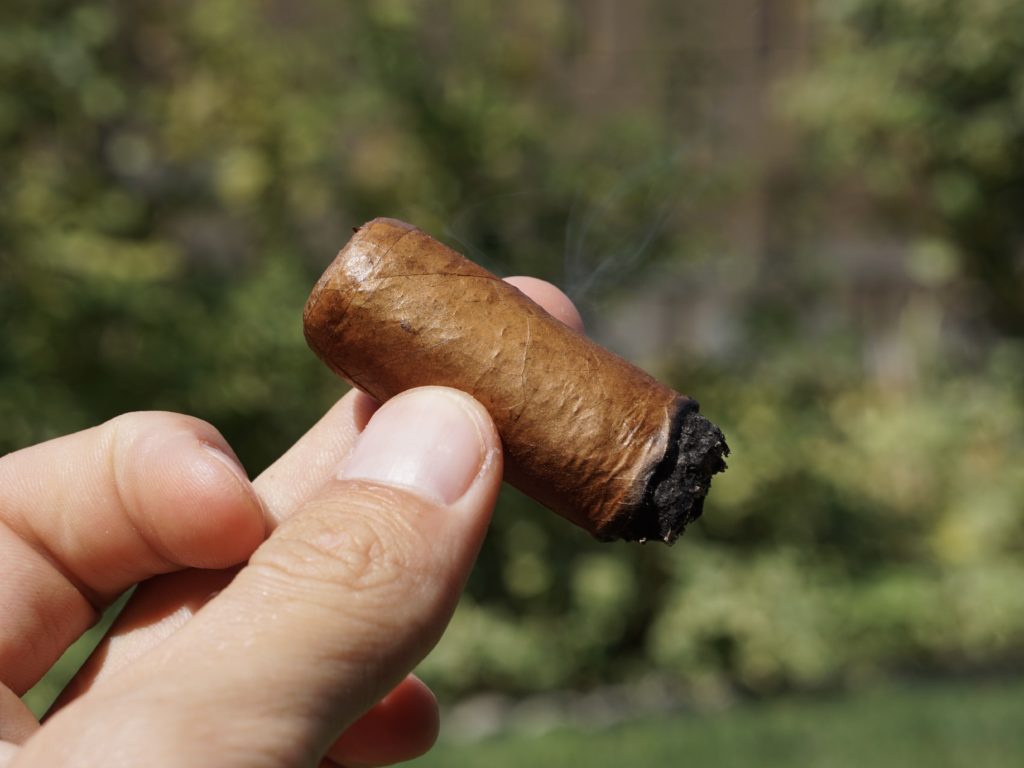 Coming in the last third, you begin to notice the most dramatic shift in the flavor profile. You first notice that the cherry flavor begins to shift to more of an over-ripened fruit, which quickly drops off completely. Those fruit notes are replaced with an earthy black tea. As the earthy notes move in, they are accompanied by a very bright and fresh floral note, but the caramel still remains and seems to be the common balancing thread throughout the cigar.

There are still some sour cherry or maybe leathery notes on the retrohale, but these are very subtle.

One of the things I enjoy about this cigar is the roller coaster of transitions that it puts you through. Even with all of these transitions, Romeo y Julieta still manages to produce a cigar that is well-balanced, complex and a pleasure to smoke.

There isn’t much to dislike about the overall burn of the Exhibiciòn No.4. I did experience one minor issue with the burn that required a minimal touch up, but it would have probably self-corrected if left alone. If I had to pick something that I dislike about the burn experience, it would have to be the ash. Though it held for the majority of the burn, it was flaky and unpleasant to the eyes. 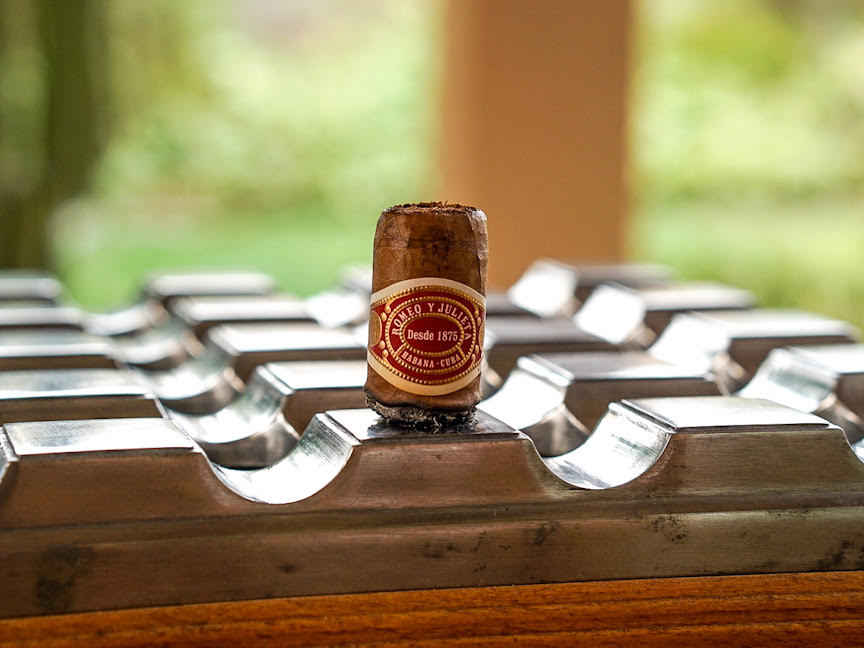 “For never was a story of more woe

Than this of Juliet and her Romeo.”

Though this namesake play is a tragic story full of strife, torn love, and ultimate sacrifice, this is not the case for the Exhibiciòn No.4. It is a cigar seemingly rolled with as much thoughtfulness and love that embraced those two star-crossed lovers. It is a regular production cigar that should be a welcome smoke for even the most experienced cigar enthusiast.